One of our airstrips up in far Northeastern Uganda, Kaabong, was beginning to become overgrown with thorny Acacia trees.  So just before Christmas a group of us went up there to do some bush-whacking. 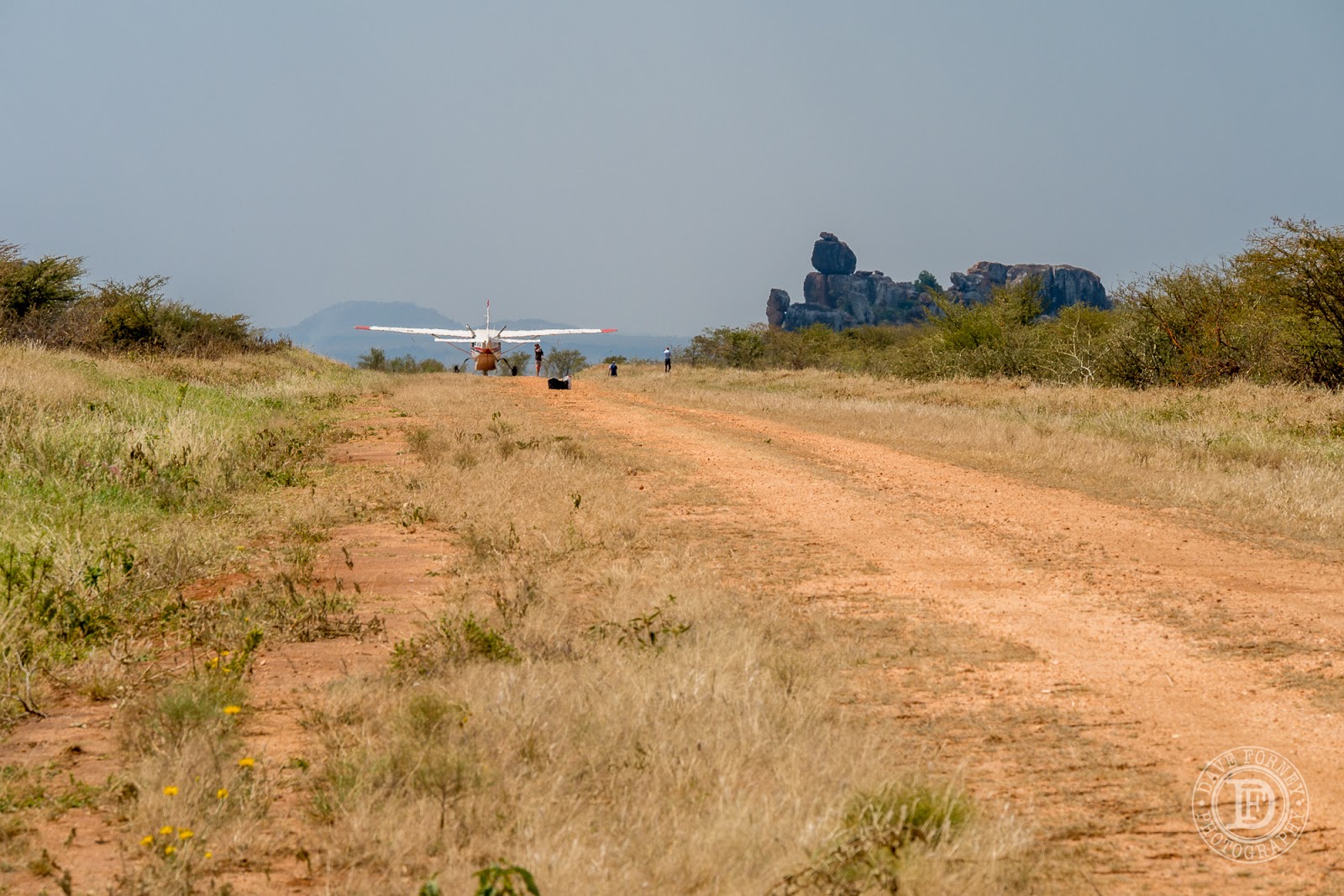 Here you can see the part of the airstrip that's in the foreground is being choked by the Acacia trees.  The opposite end has already been cleared by The Baptist Mission, one of the groups we serve up here.  This strip is very close to the mountainous border with Kenya, and during dry season (which is now) it experiences very high and turbulent winds, which can make it a bit tricky for landing.  Being narrow obviously doesn't help... so we determined to return it to it's original width. 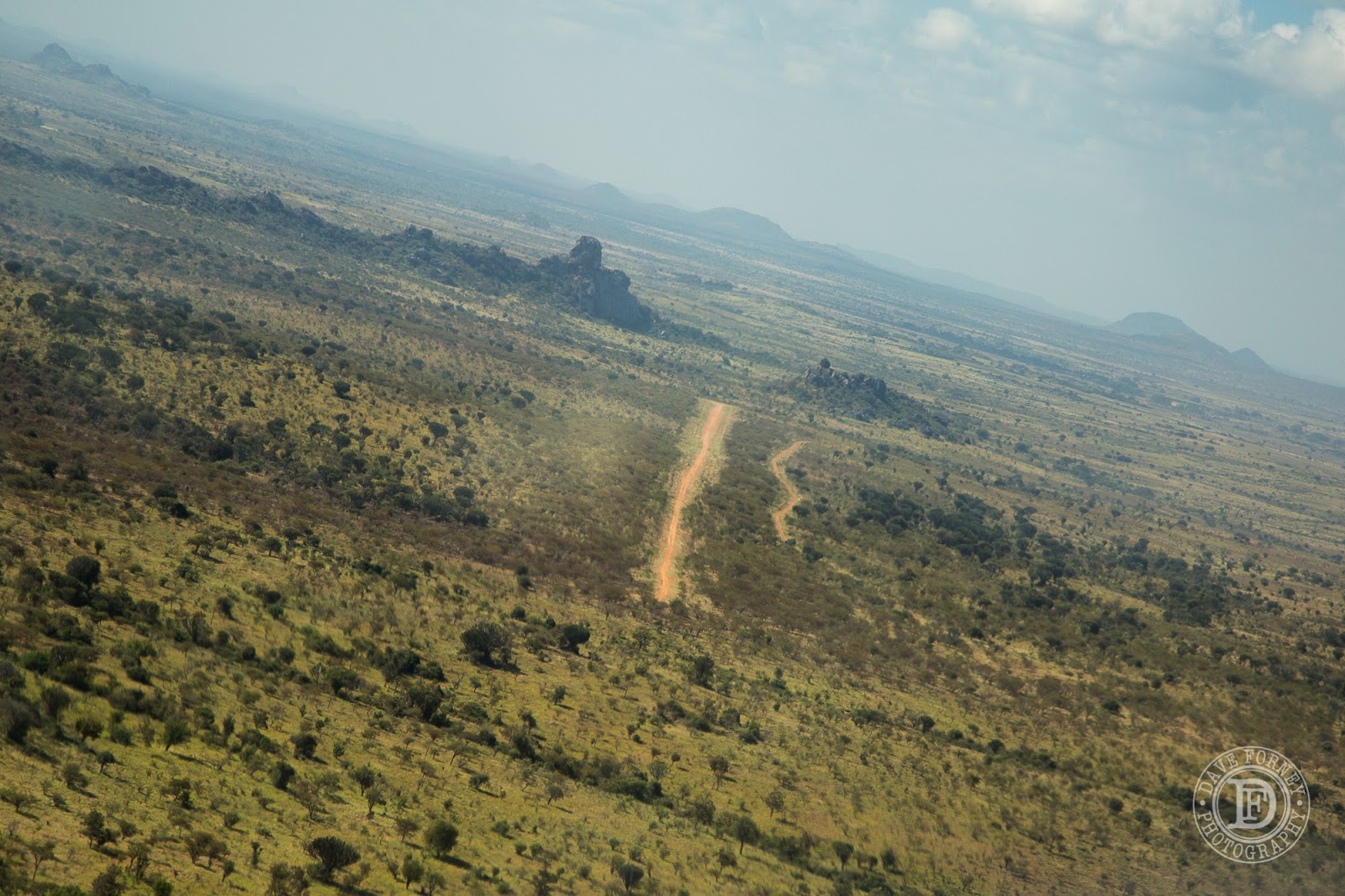 We brought along a few boys to help--two of mine on the left (Hudson and Britt) as well as Simon's boy, Joshua.  This shot was taken on the flight to Kaabong in the morning.  Notice how energetic and excited they are?  Compare this to the photo at the end, when we're heading home.  It's quite a difference! 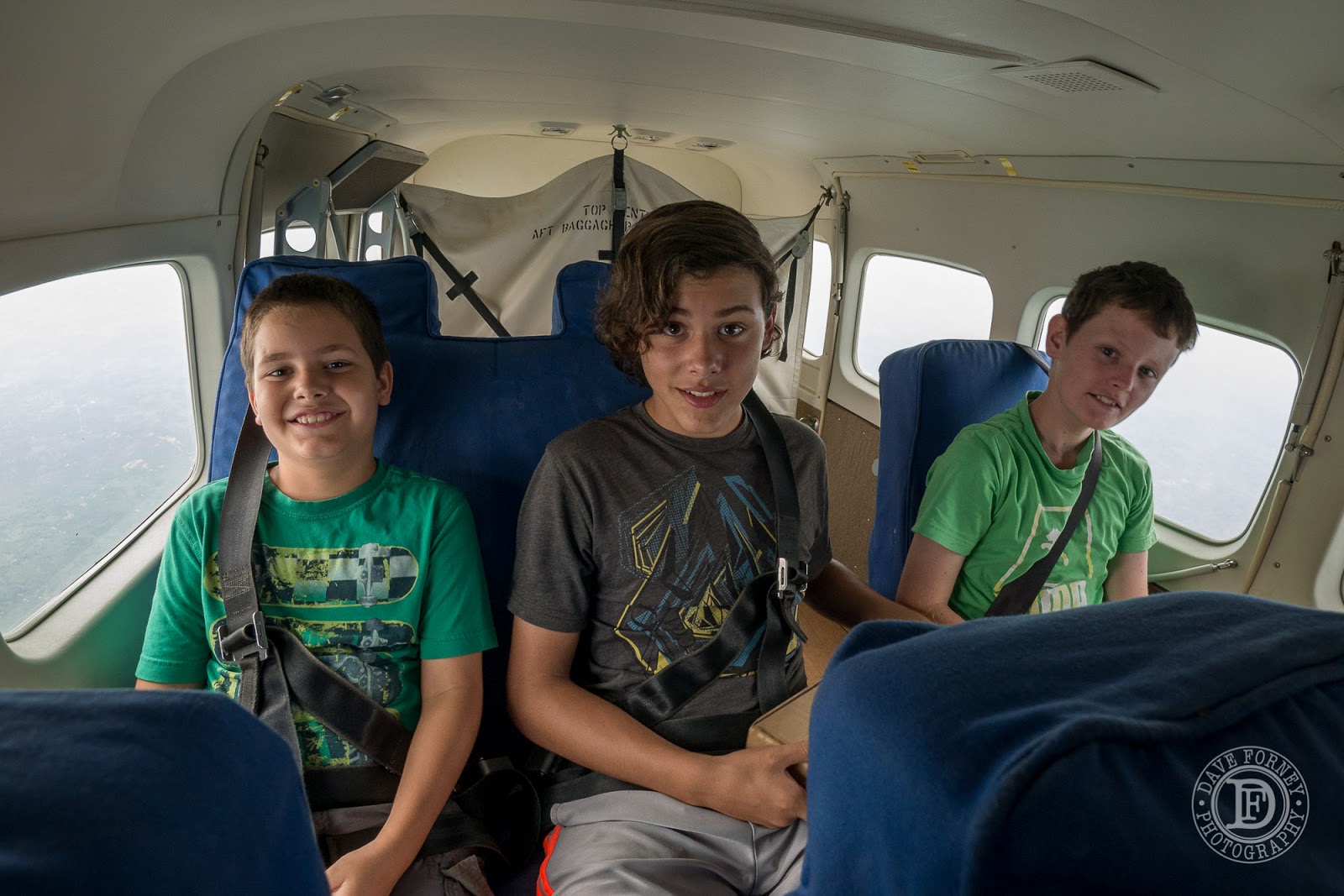 Armed with machetes and definitely feeling macho, the boys immediately began helping to clear the brush along the sides. 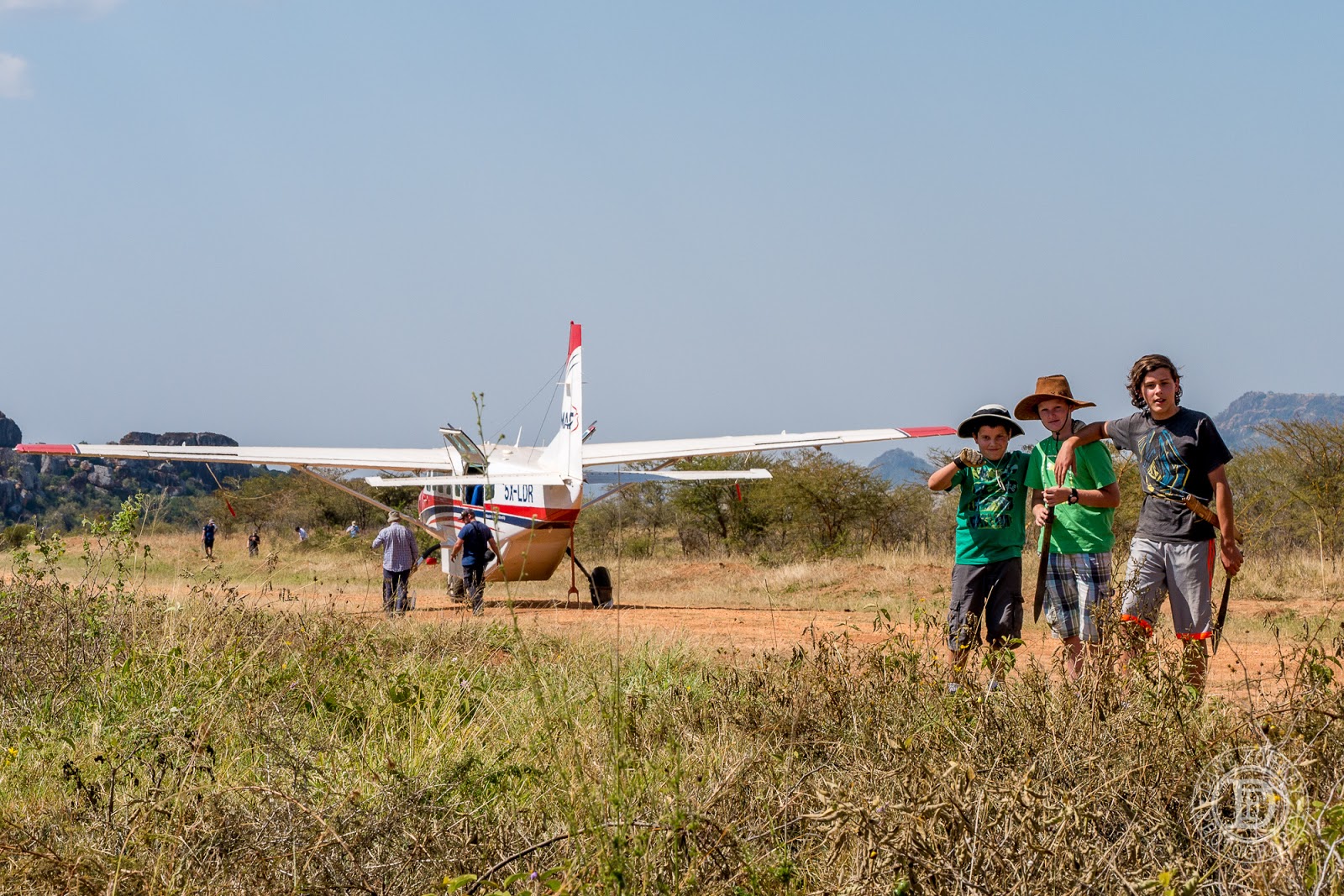 In this picture you can see where, in the foreground, some of the trees and bushes have already been cleared and burned.  But as you go further down the strip they continue to encroach more and more.  That's what we were about to tackle. 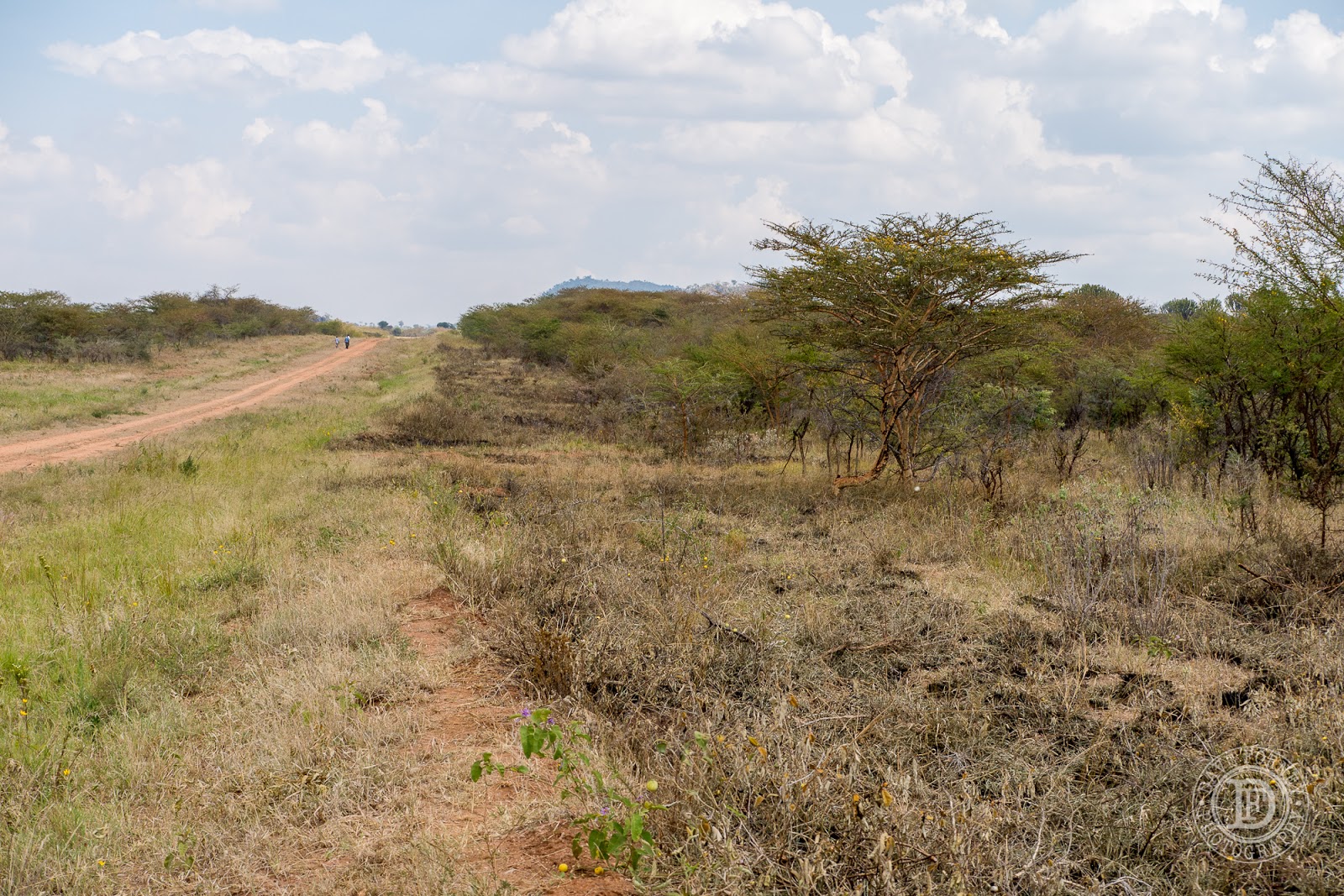 Simon and I each have a chainsaw, so we took opposite sides and began working our way down the strip, cutting the larger stuff and leaving the smaller stuff for the boys to clear behind us.  These Acacia trees are no walk in the park!  They are absolutely bristling with extremely sharp, hard, long thorns, which seem to delve out a disproportionate amount of pain when they poke and gouge you--almost like they have a bit of poison on them or something.  And because the trees are all interwoven, and the thorns act like Velcro, holding them together, the trees never seem to fall where you want or expect them to.  So Simon, below, and I, both had our fair share of battle wounds by the end of the day. 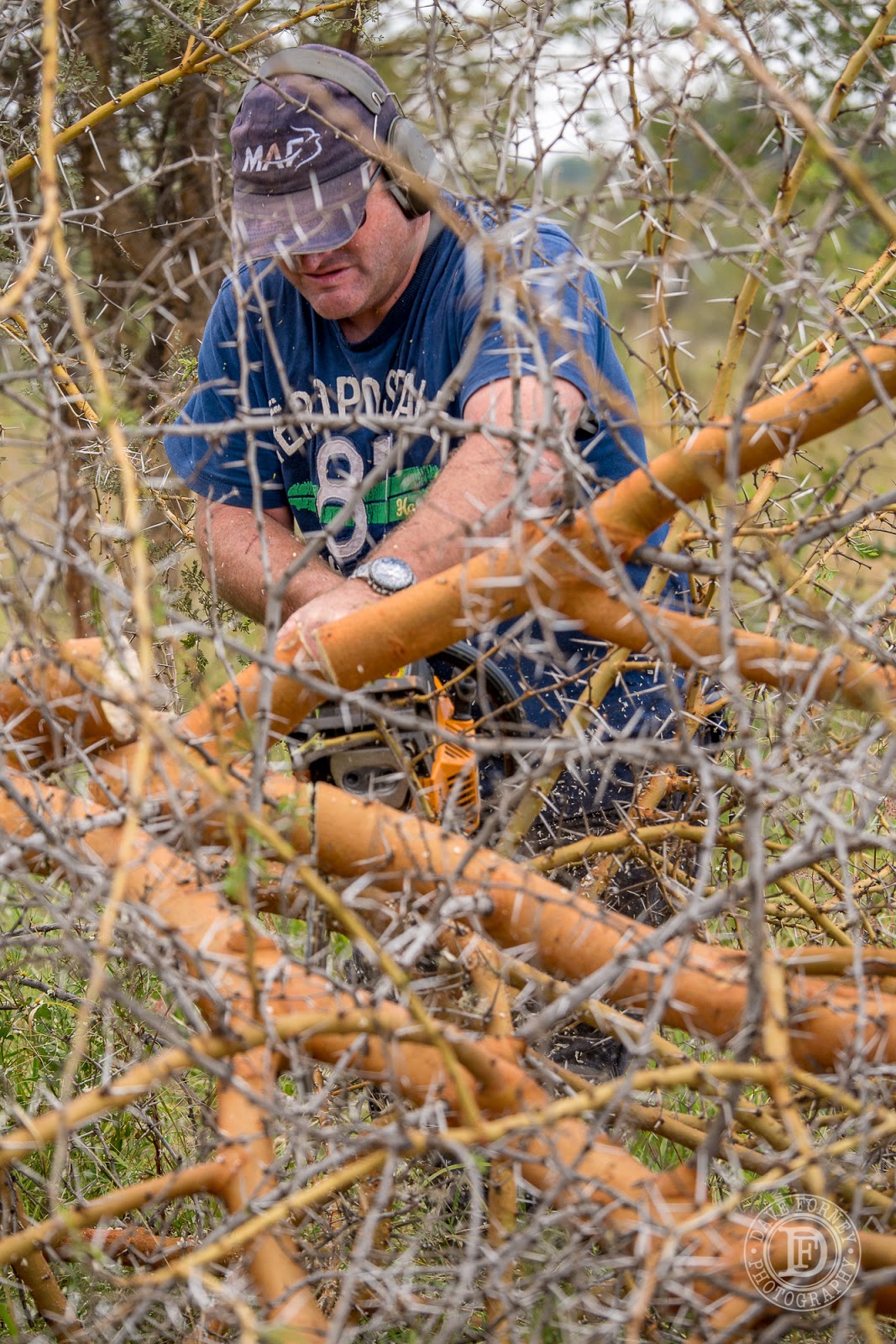 At one point, a tree about the size of the one in the photo below, spun around and fell on me.  It happened a few times to both of us--and it always took about 10 minutes to slowly extract ourselves from the thorny prison.  These trees are bushy, and not all that heavy, so it's not the tree itself that hurts.  It's those blasted thorns!  On that occasion I put out my arm to protect my face, and a thorn about 2 1/2 inches long buried itself right into the back of my elbow joint, all the way to the base.  It felt like I got knifed.  And by that night my elbow was all swollen and throbbing.  I felt like a wuss... I mean, after all it was just a thorn.  But man those things are big! 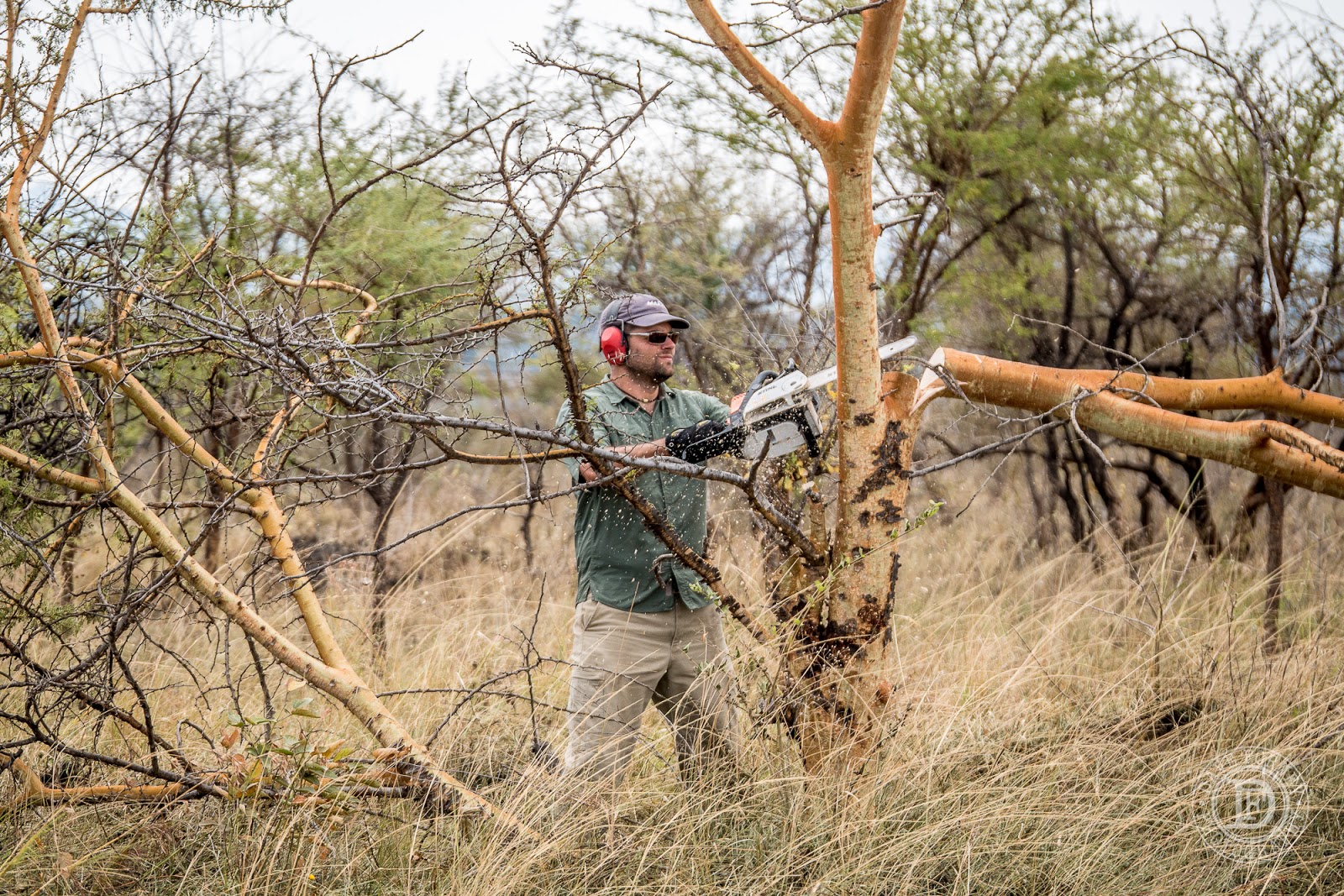 But it was all great fun!  There's just something therapeutic about chopping down trees!  Around 1:00  Jeremy, from the Baptist Mission, brought us a great lunch, which we enjoyed along the side of the strip. 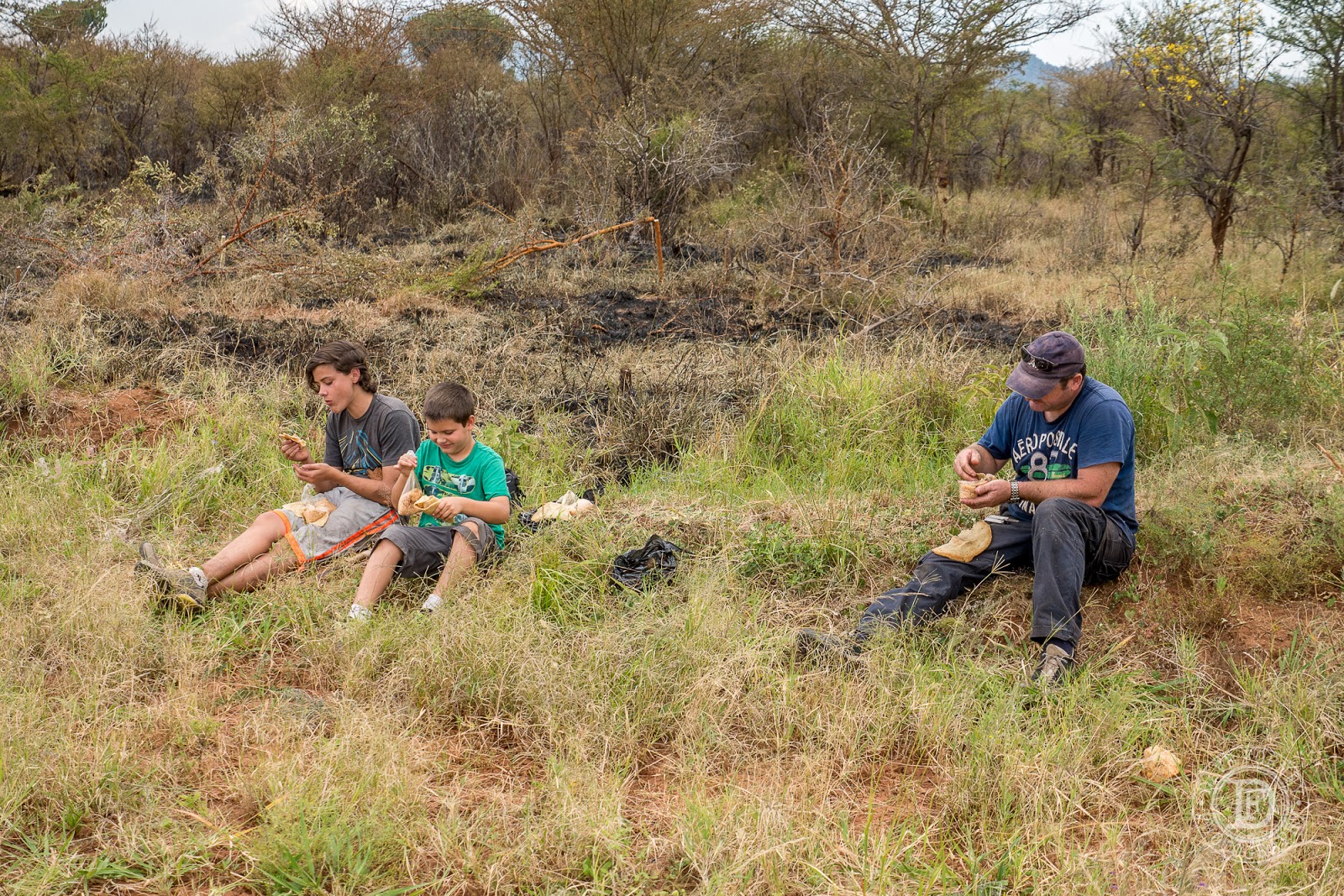 Hudson is my technical guy--he loves tools and fixing things, and says that he's going to be a missionary pilot when he grows up.  He was desperately hoping to get to use the chainsaw, so we worked together on a few trees. 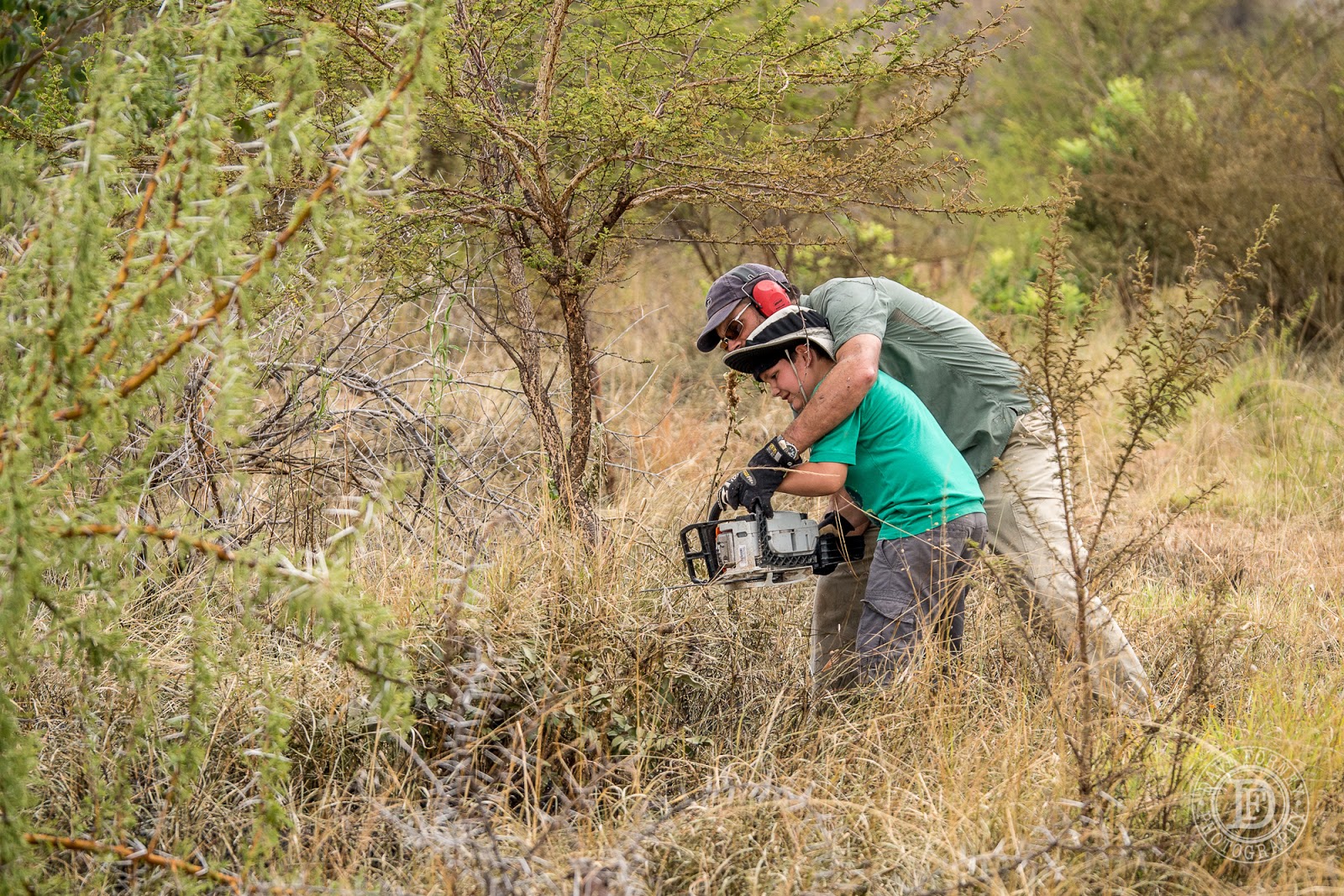 Then he wanted to pose for another macho picture, with the saw.  The smile says it all! :-) 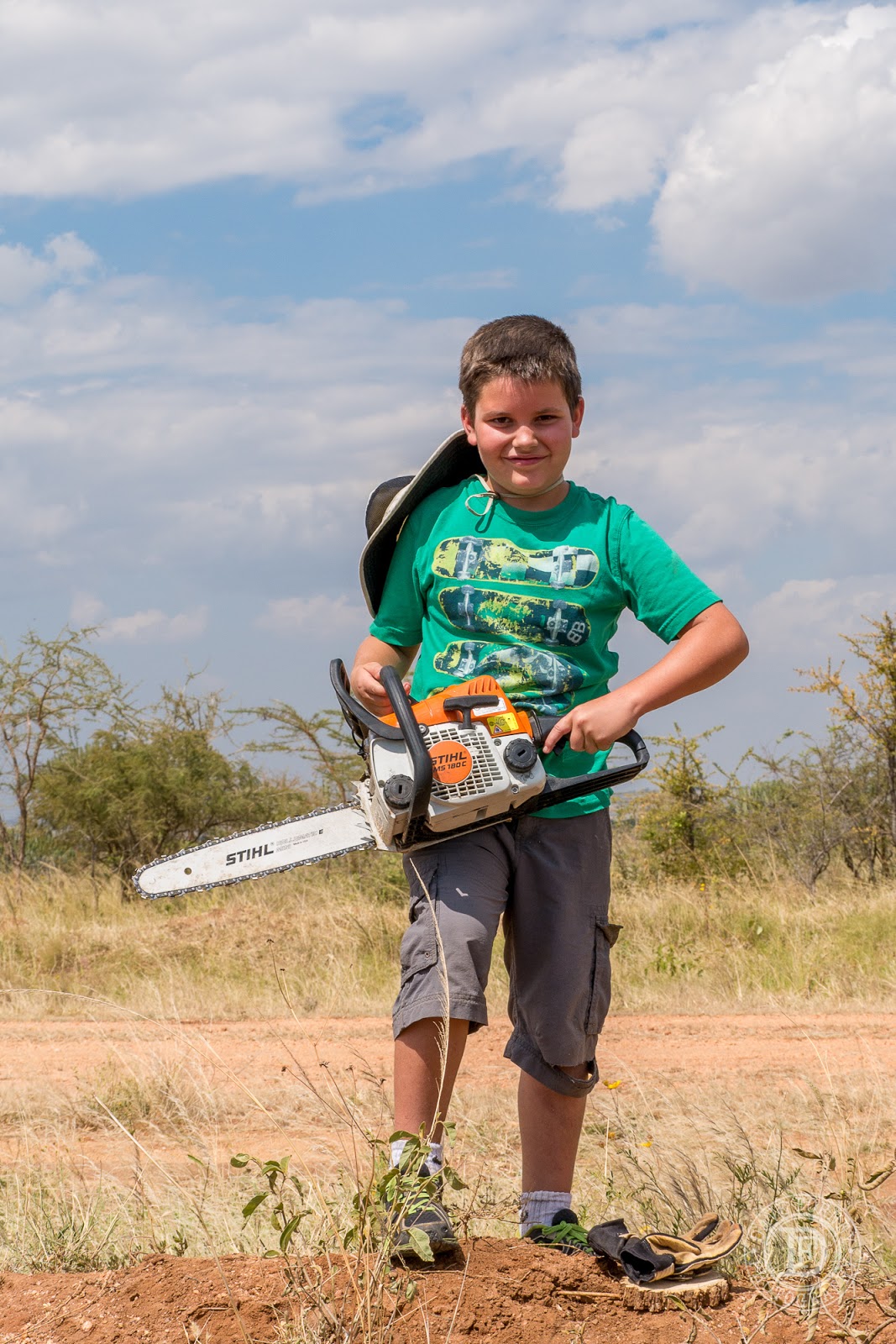 We had accomplished quite a bit by the time we headed back in the late afternoon, not he least of which was to completely tire out those three energetic boys!  Only a few minutes after takeoff and they were all three completely out! :-) 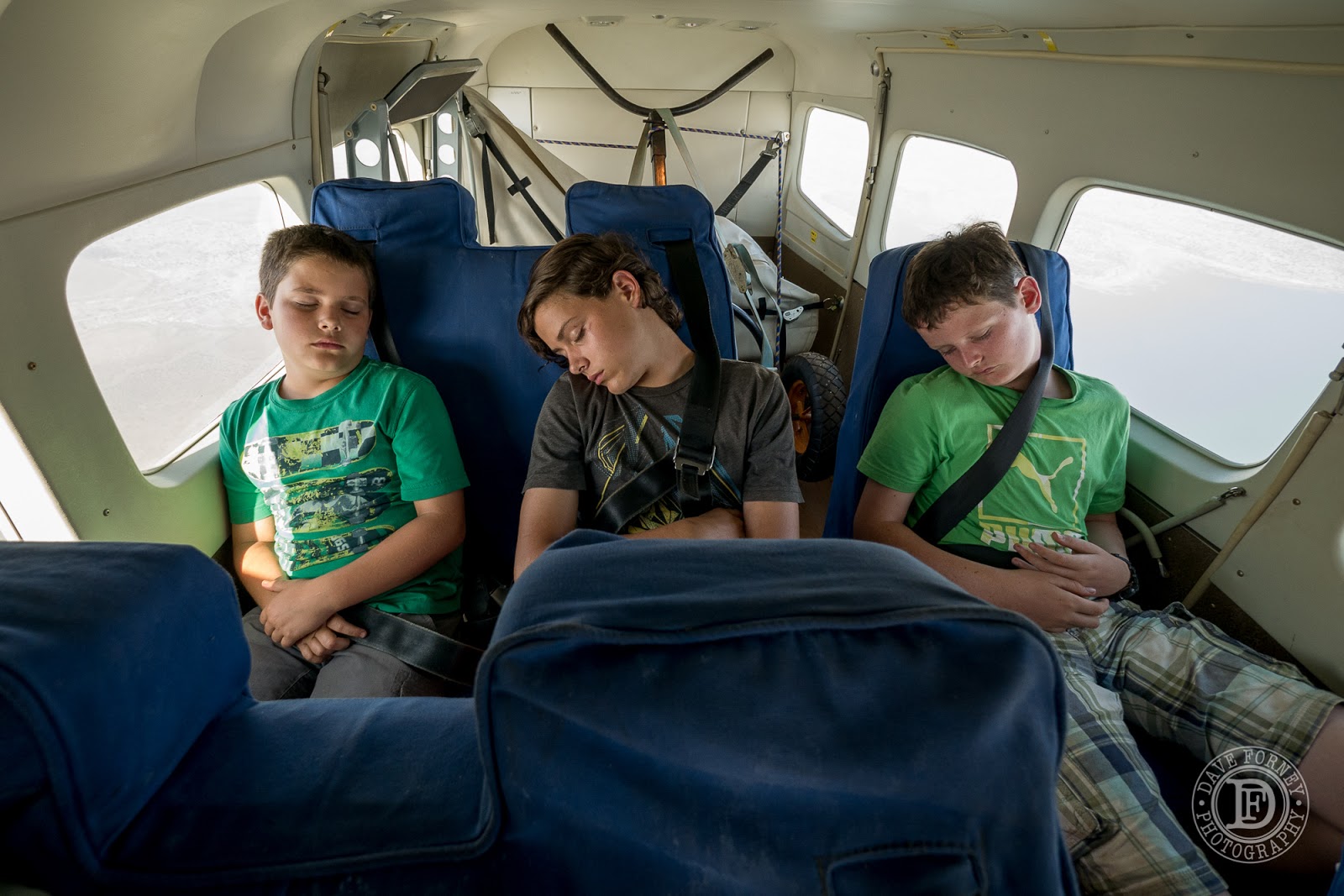 Great post Dave. Yes, there is something therapeutic about deconstructing things (like trees) - not just constructing! Love the way you give your kids so much real life, adventure and experience.

Hoping you and Joy and the kids are finding a deep sense of home together in your "new" place,
Ali