Here's some more photos, (and at the end of this post another story I wrote a day or two before I left).  Below, a few of the MAF DR guys in front of one of the choppers.  Actually, this was a rare occasion when there were quite a few of us out on the ramp...usually most of us were working feverishly in an office. 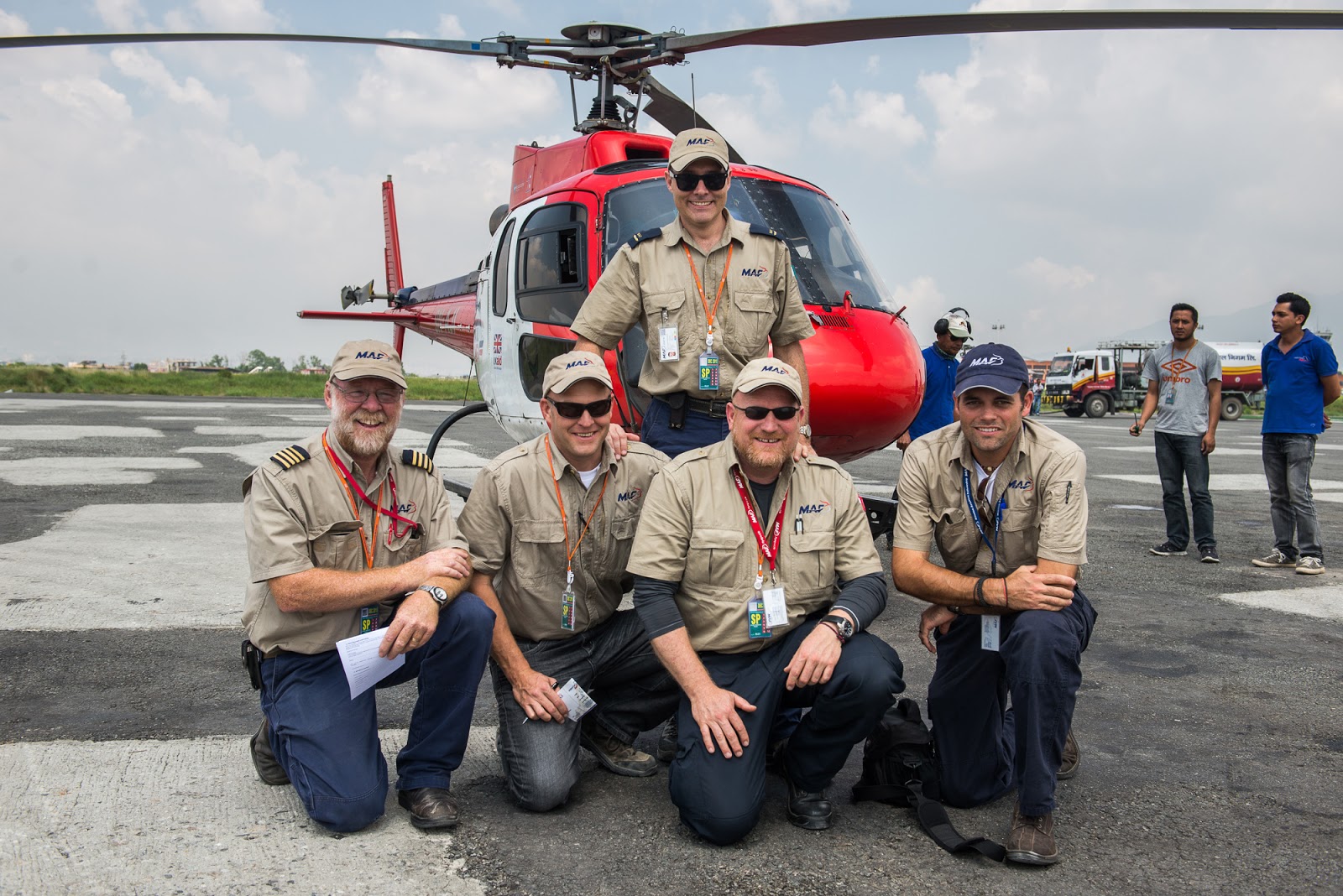 We secured major funding from UKaid.  That, combined with the additional MAF and Helimission subsidies, allowed us to provide the helicopter relief flights at a very cheap rate for the NGOs. Below, MAF's Vaughn Woodward shakes hands with the UK Secretary at the Department for International Development, Justine Greening, after she rode on a flight. 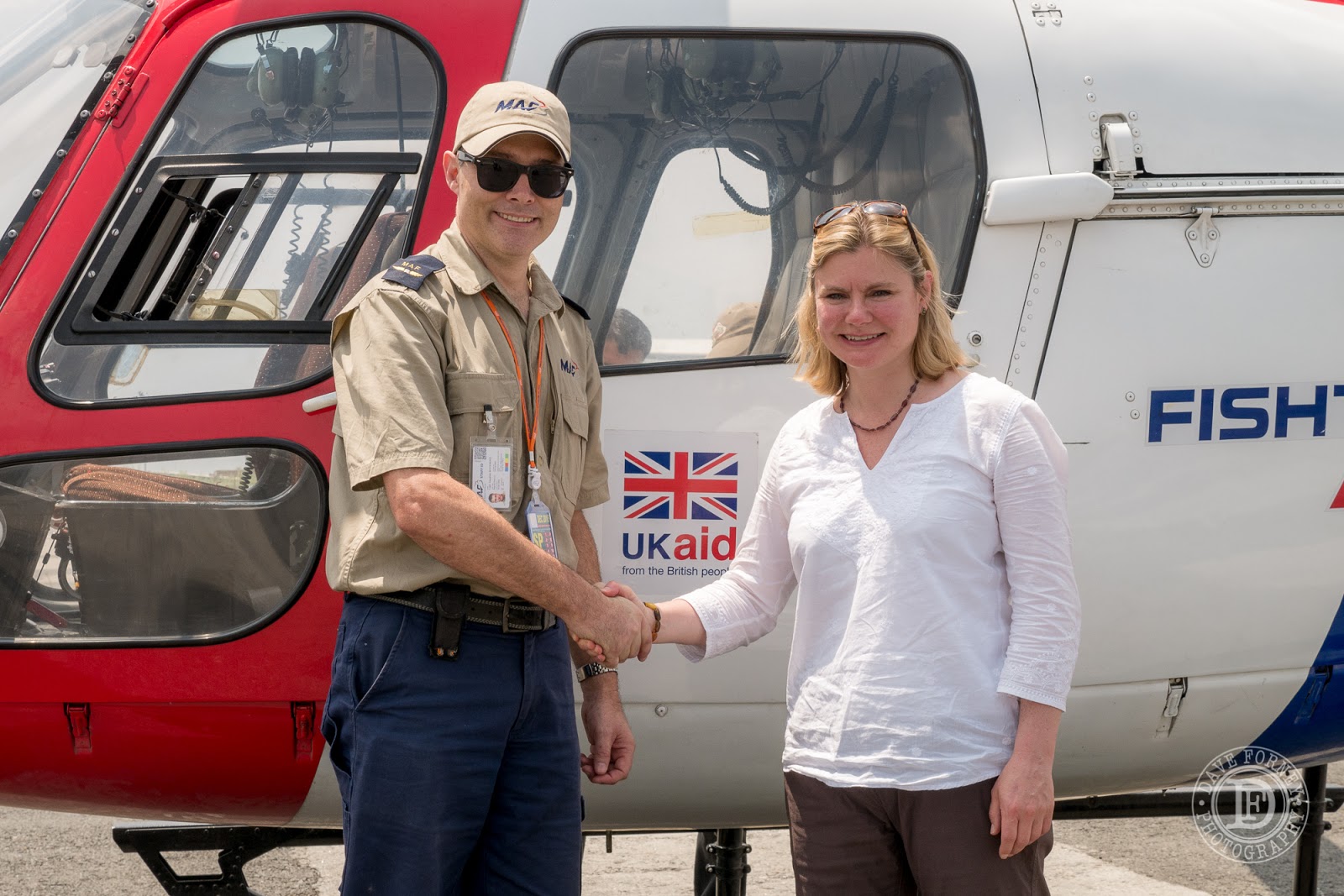 We worked with Fishtail Air, a renowned local helicopter operator, well-known in the alpine climbing community for their expert helicopter operations at very high altitudes in the most rugged locations.  They hold several world records for high altitude ops, including the highest rescue ever done by a helicopter.  Below, one of their advertising posters--a picture taken of that very rescue off of the upper slopes of Mt. Everest. 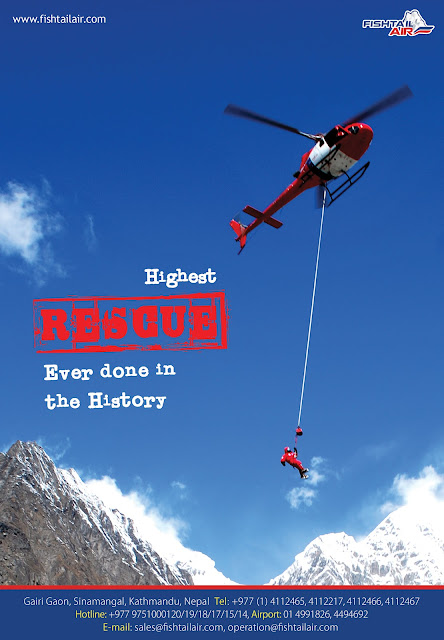 I developed a lot of respect for, and became good friends with, a number of the Fishtail Air staff, including Capt. Ashish, below. 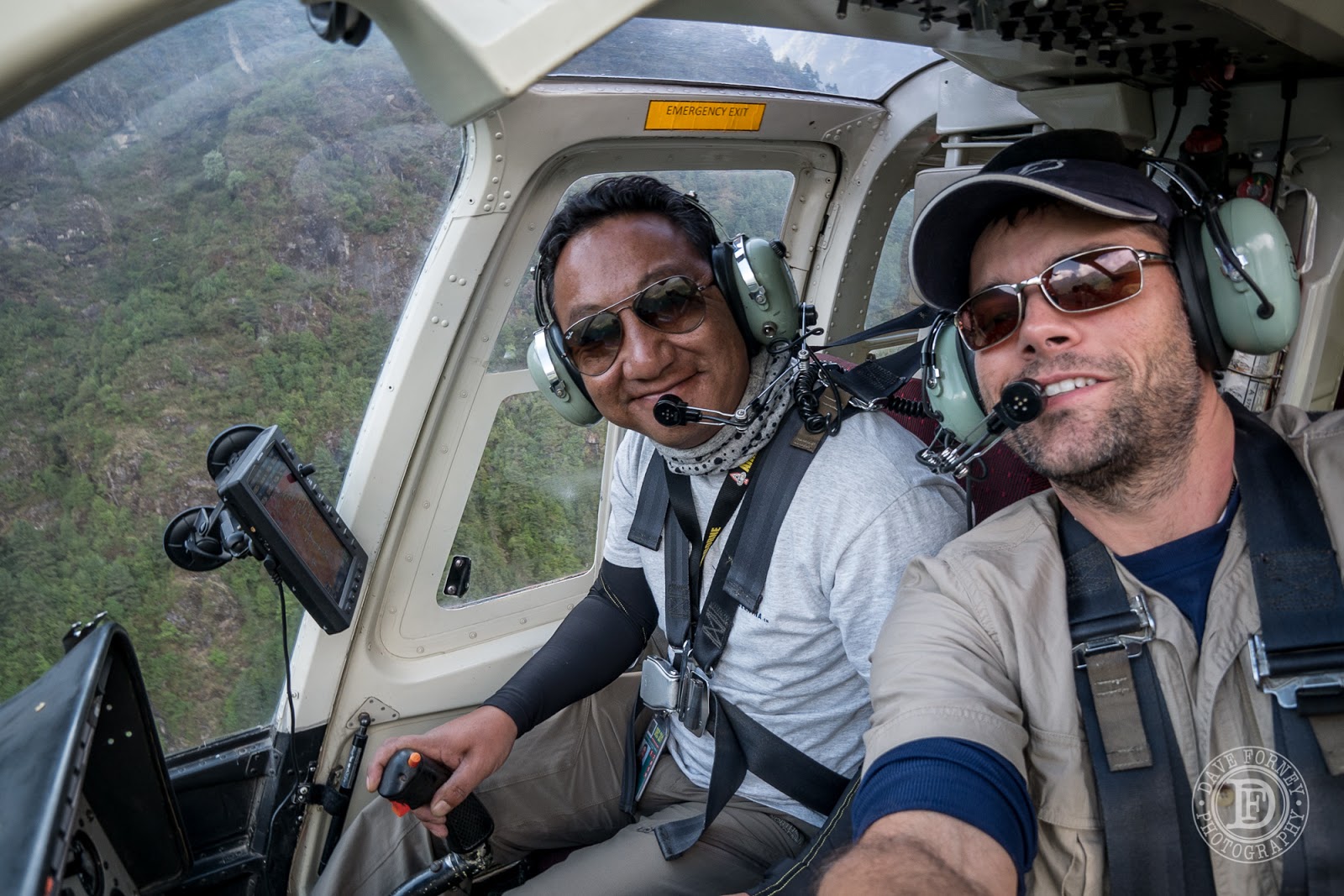 During the frantic weeks after the twin quakes, we helped coordinate hundreds of flights for many dozens of different NGOs, from big international ones to small local ones.  Below, Mountain Child prepares to depart on another flight into some of the most remote, and high-altitude locations--places where they were already doing awesome work prior to the quakes. 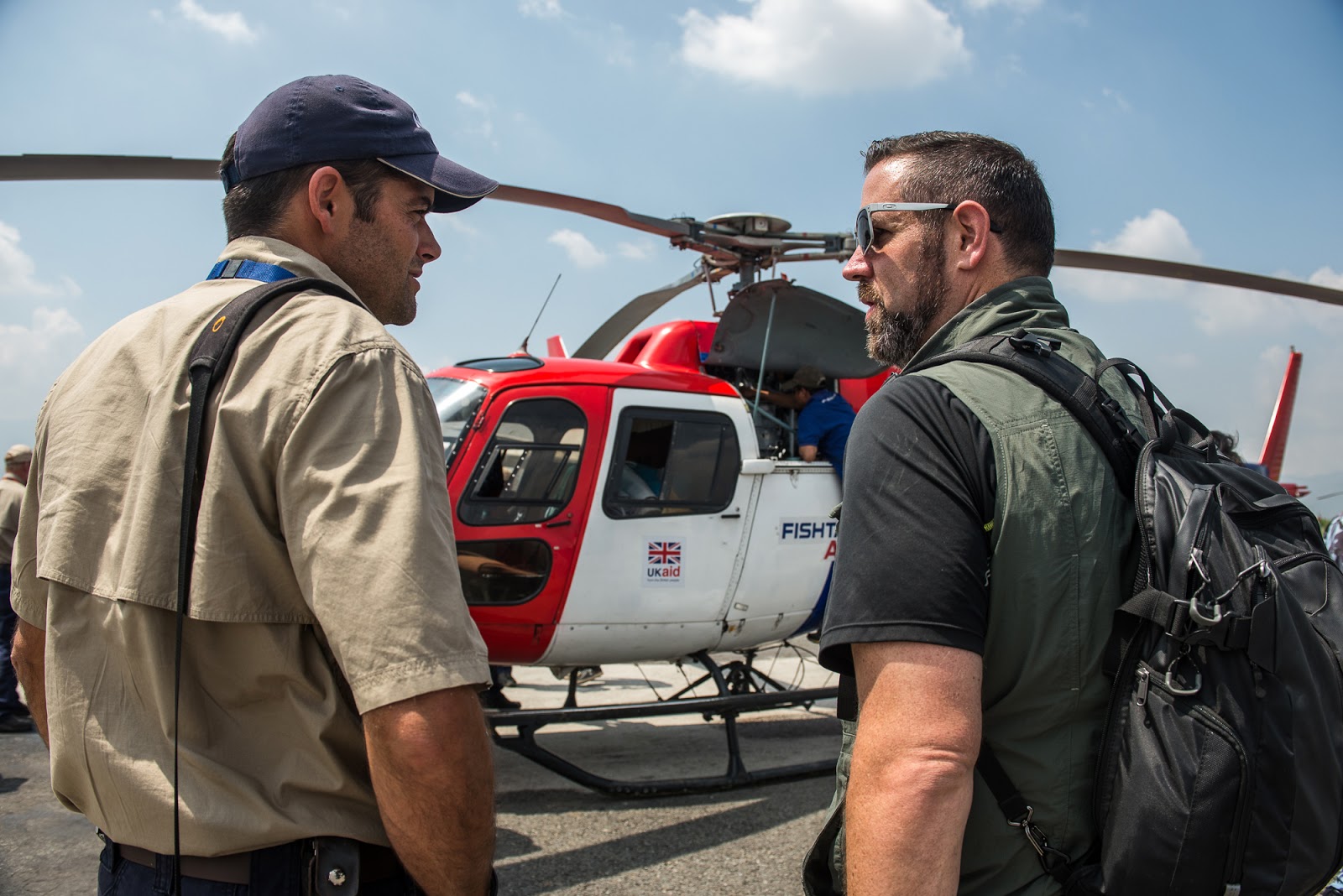 The above pics might give you the impression that I was out on the ramp a lot. In fact, I was almost never out there.  I spent 99% of my time in the office, helping to coordinate and facilitate all of the flights.  I wish we would have taken a photo during the initial two weeks, or the days after the May 12th quake. Our office was literally crammed with about 40 people at a time, all day, every day.  But I think we were just so busy that we never thought about a photo, or didn't have the time to take one.  These were taken after things became a bit more "routine".  As you can see, the process involved a lot of time looking at maps and working out details on the ground, in order to make everything as efficient and effective as possible. 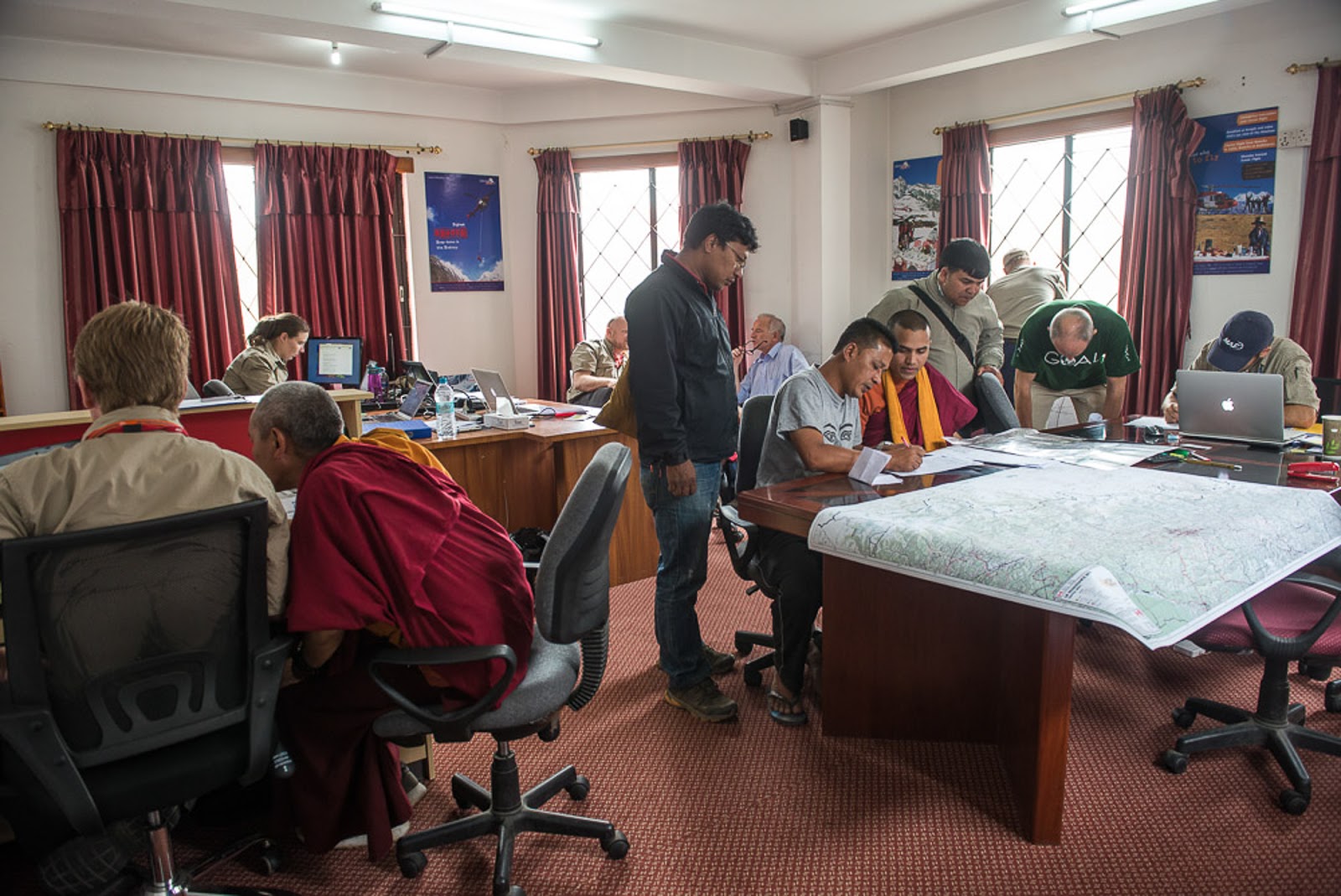 These guys are Sherpas. They are hard core!  They were arranging flights to bring relief supplies to their communities, which were some of the most remote and hardest-hit.  One of these guys has summited Everest 11 times, but been on Everest summiting teams 28 times!  The other times, when he didn't summit?--that was because he was helping the "tourists" who couldn't make it for one reason or another, back down the mountain so they didn't die. 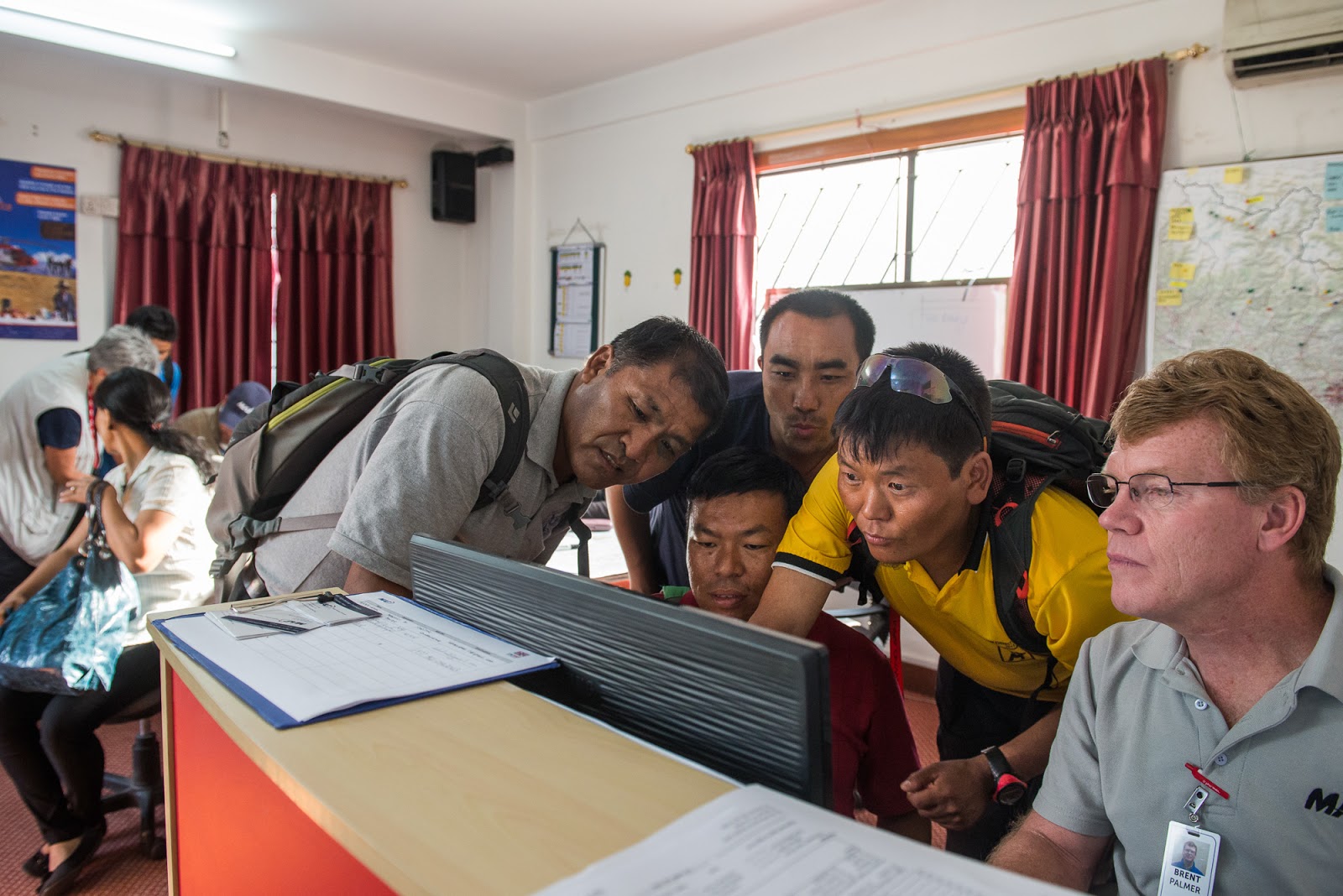 One of the agencies who was in our office almost every day arranging flights was the SDC (Swiss Agency for Development and Cooperation).  They often bought us Swiss chocolate, which we were all to happy to accept. :-)  This scene cracked me up, as they were laying out a complex flight plan on the big planning map, using little Swiss chocolates to mark various locations. 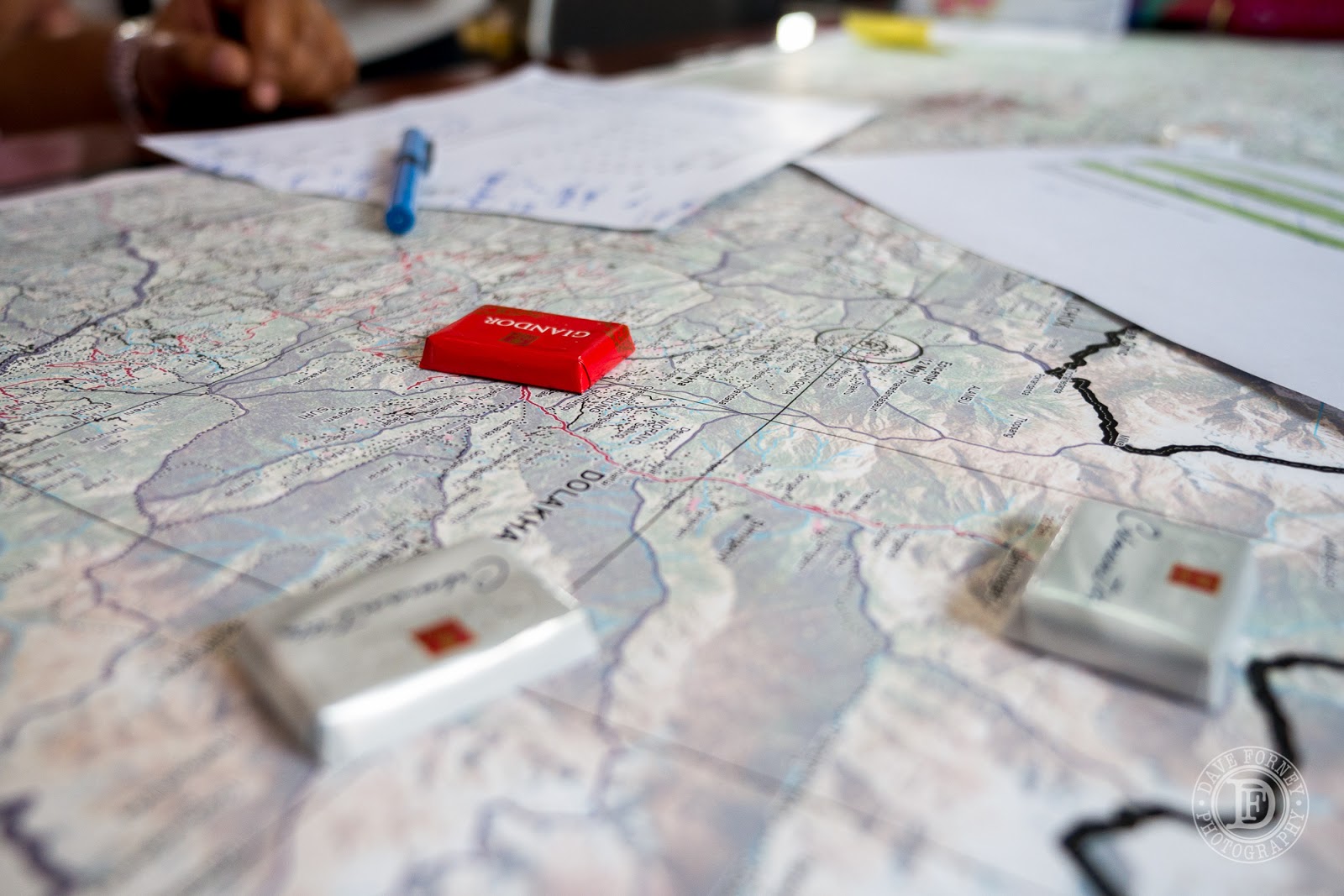 While most of us were in the office helping with the logistics of planning, we also had several guys assisting on the ground ops side of things out on the ramp.  Again, they developed a lot of respect for their counterparts at Fishtail Air, who did a great job putting in so many extra hours to help things run smoothly. 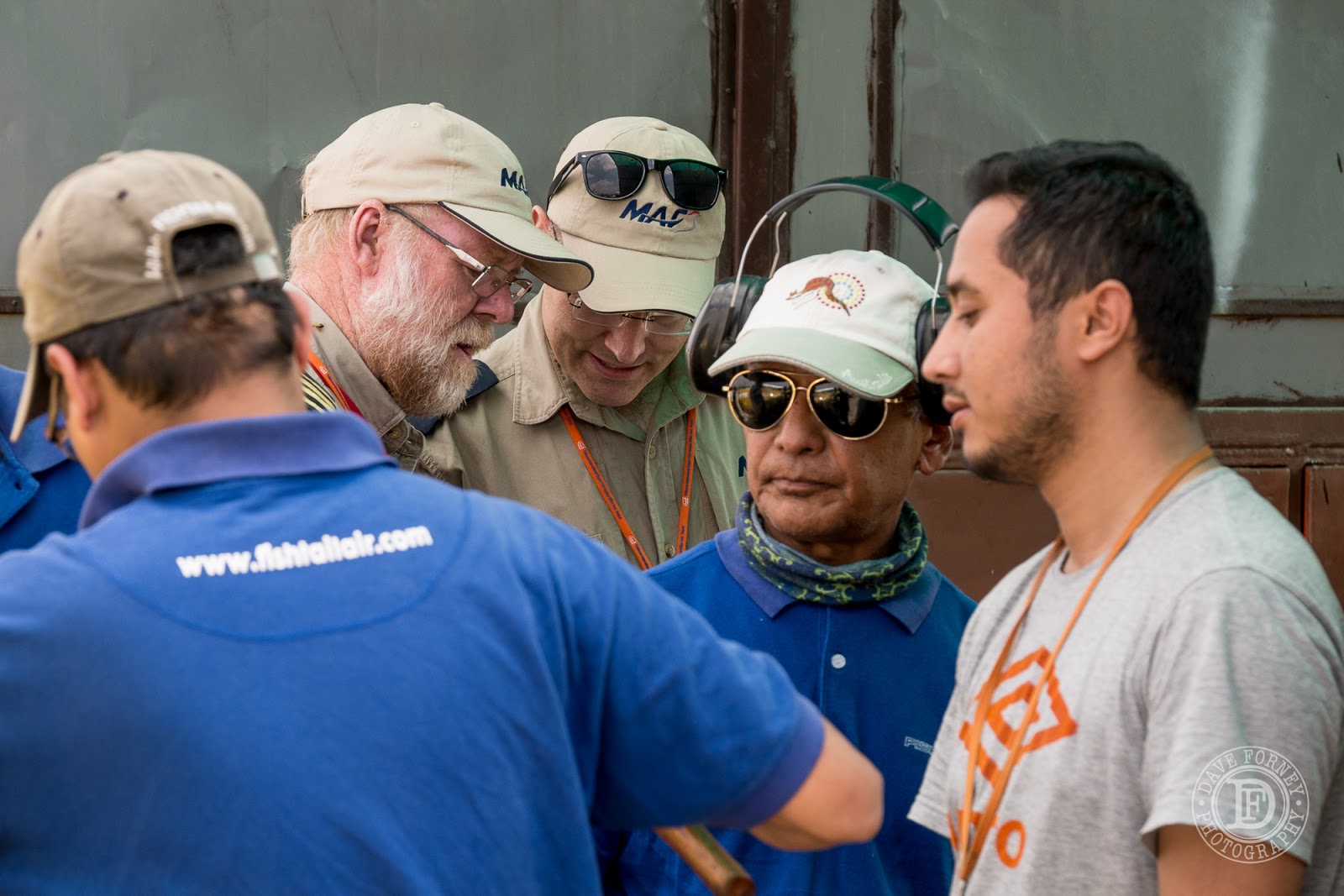 And just in case you forgot, here's a few reminders of why we were doing all of this: 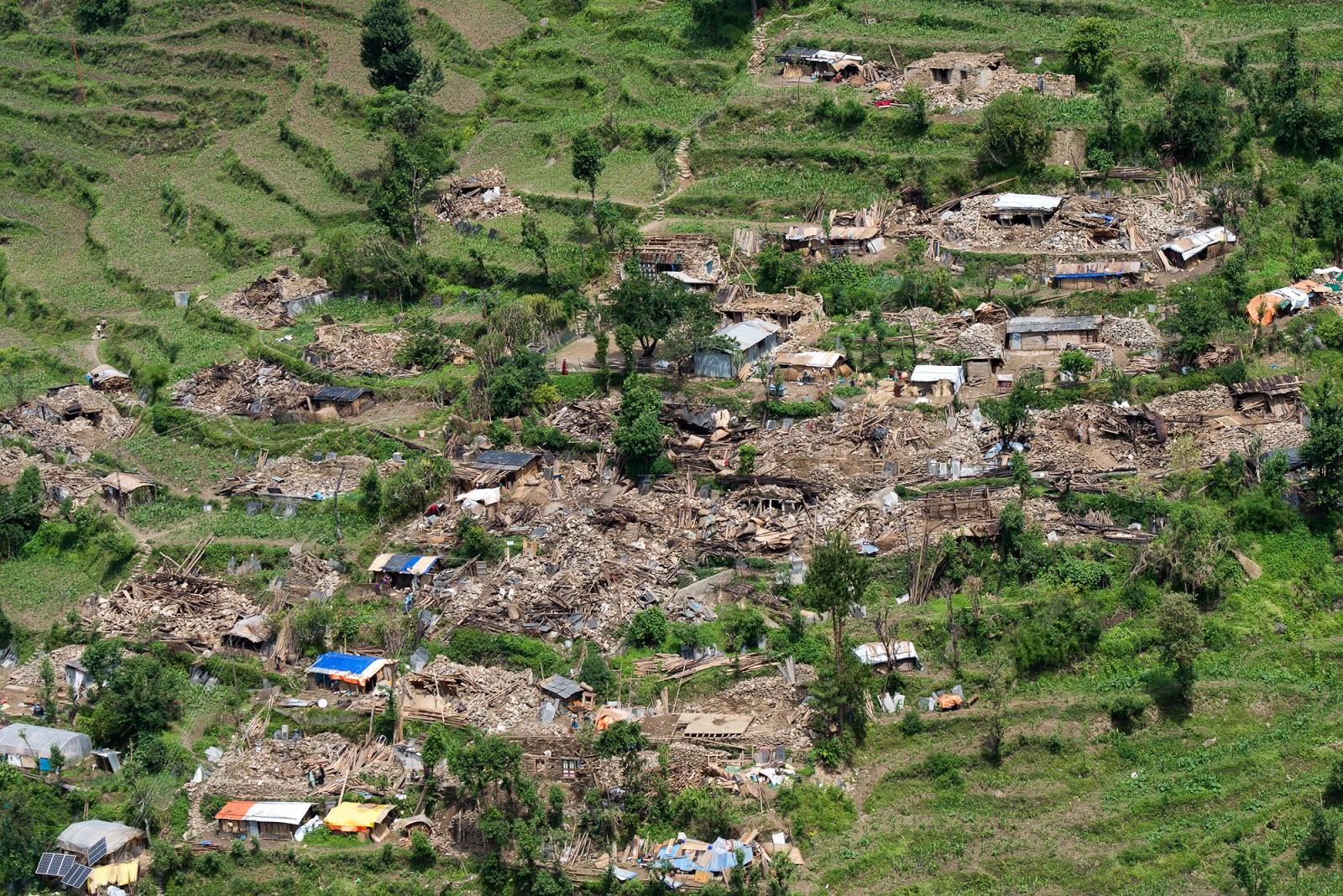 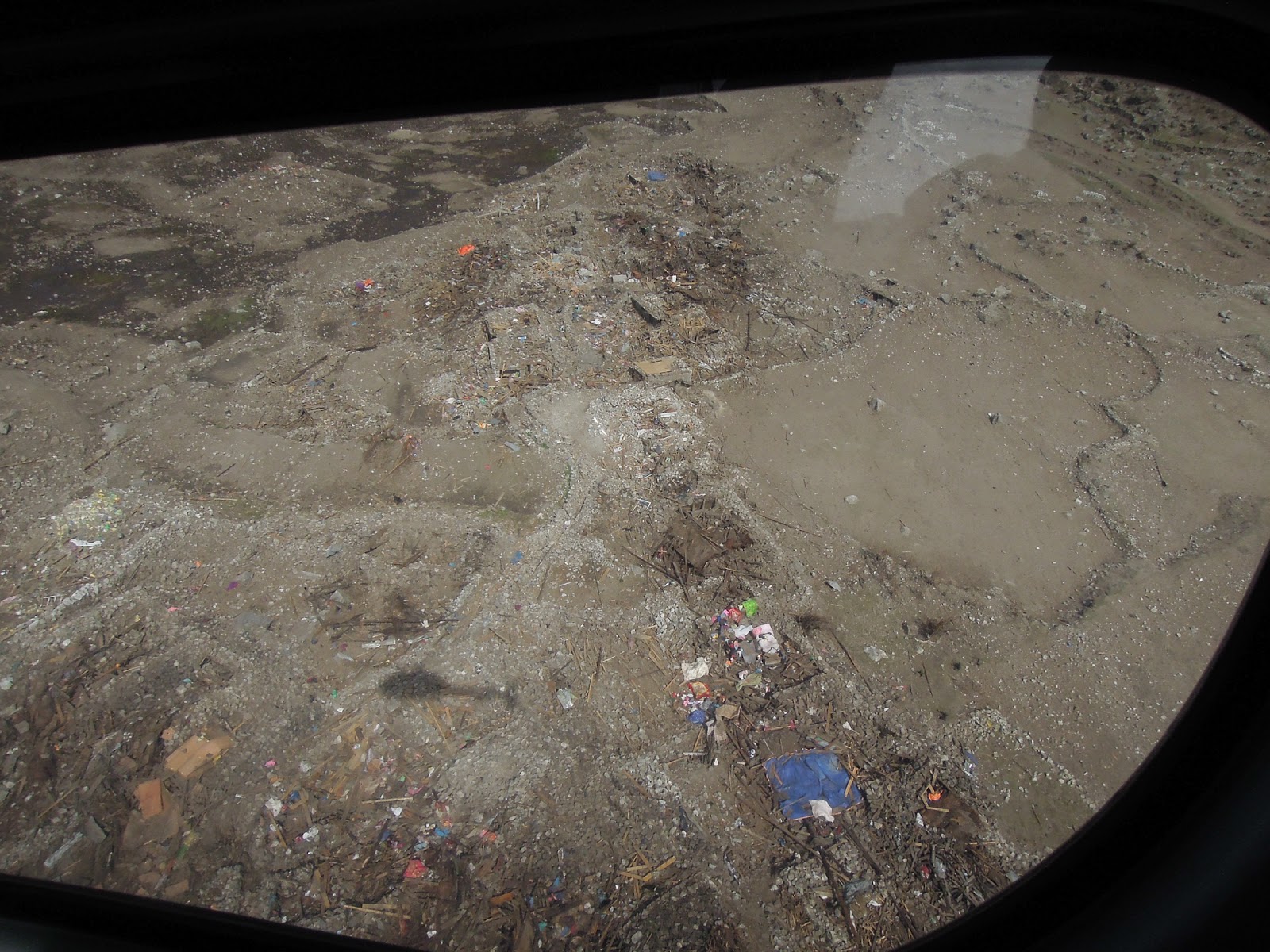 You can see that even though some communities used to have roads or trails via overland, almost all of them were wiped out by numerous landslides.  It will take many months, or even years in some cases, before all of the roads, trails, and bridges are fully repaired.  Scenes like this one were visible everywhere, the helicopters flew.  Literally hundreds and hundreds of landslides took out trails and roads all over that region of Nepal. 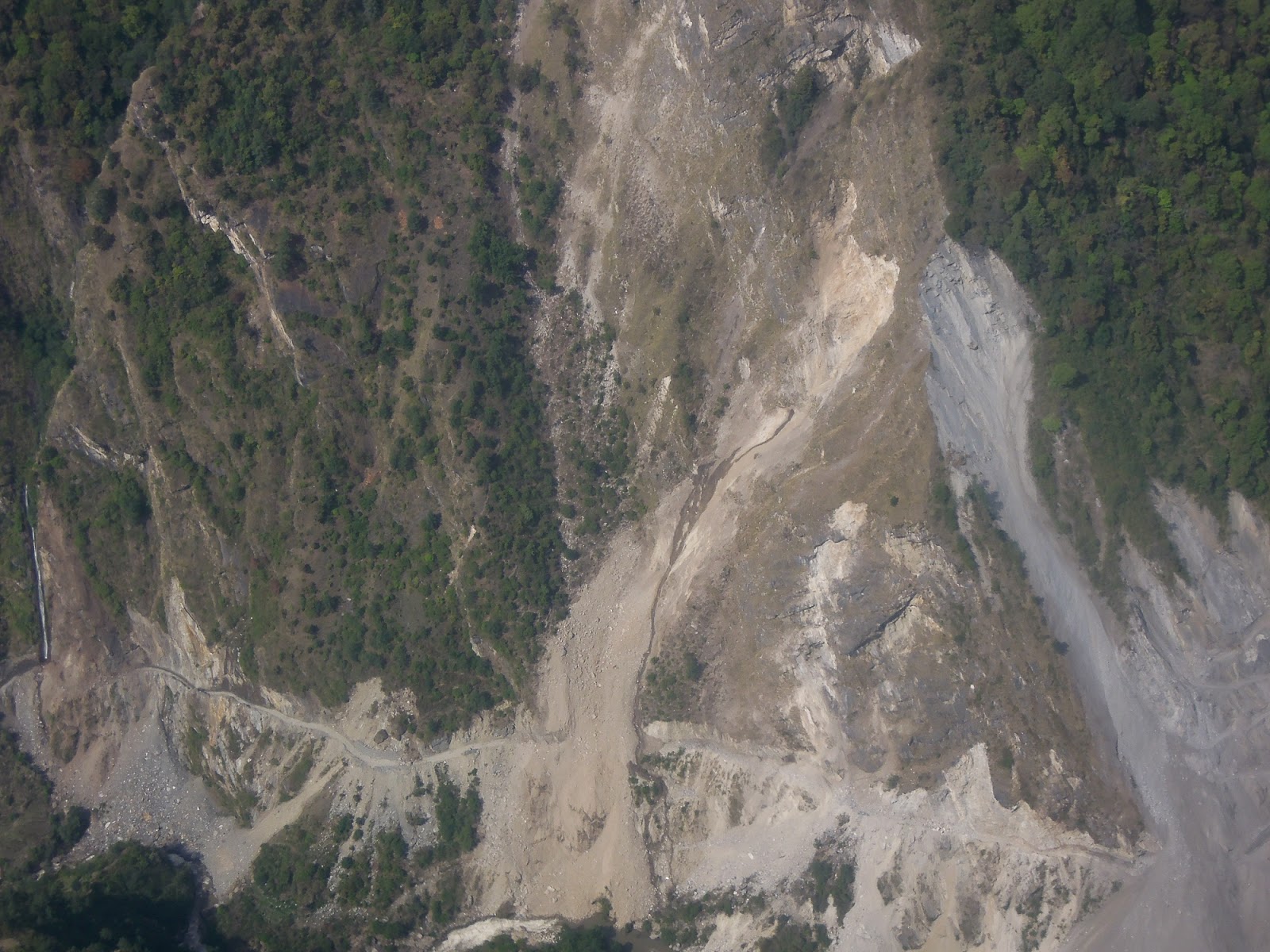 After the second big quake on May 12th, many people in Kathmandu were afraid to sleep in buildings.  The parking lot in front of the hotel were we were staying, was full of people sleeping in the open, or under tarps.  Almost all of the public and private locations in the city, where there was an open patch of ground, (where a building couldn't fall on you) had people camping out there. A few parting shots showing what we were doing, and for whom. 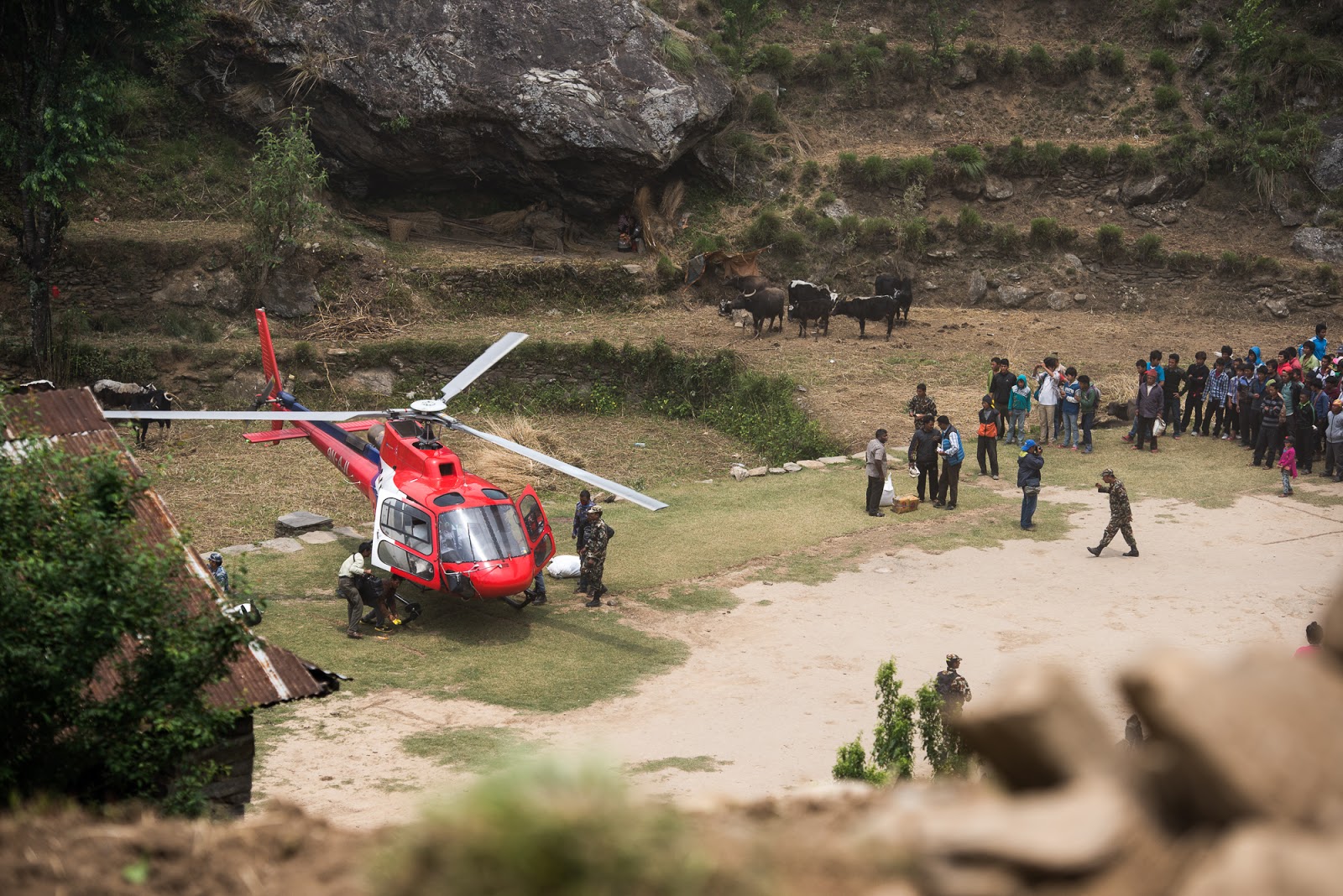 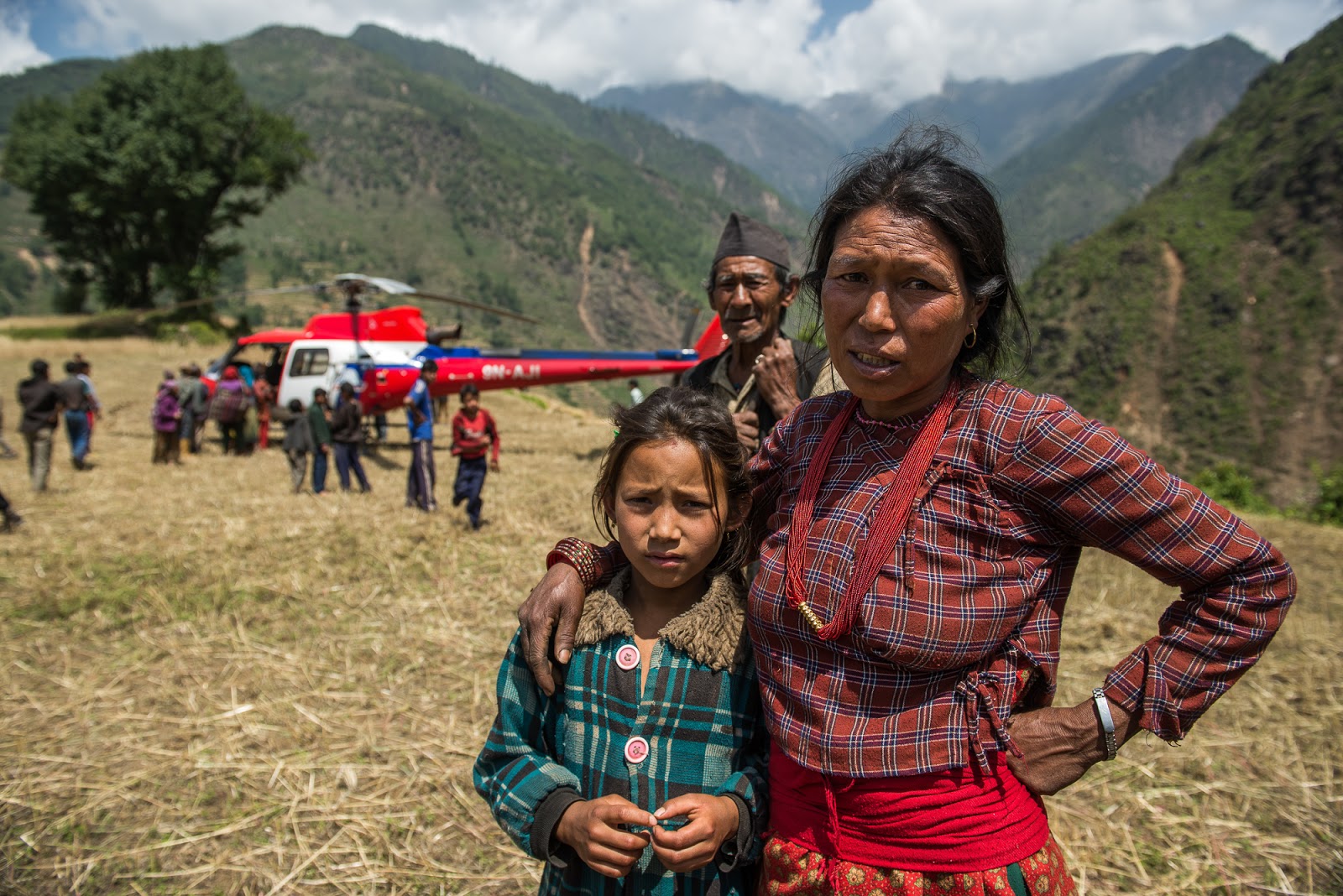 Here's the second story I mentioned:

It’s been almost a month since I landed in Kathmandu, to assist MAF’s Disaster Response team in their relief efforts following the devastating earthquake that hit Nepal on April 25th.  It’s hard to remember any individual day since I arrived.  Working 7-days a week, often 18-20 hours a day during the first few weeks, and now “slowing” to around 12-14 hours a day, the time here seems to be one continuous blur of relentless, behind-the-scenes efforts to help as many people as possible in the most inaccessible communities.

With major funding provided by UK Aid, and additional funding from MAF, and Helimission, we’ve been able to access, and provide huge subsidies for, two highly capable helicopters operated by Fishtail Air, a renowned local helicopter operator, equally interested in helping their suffering Nepali countryman, but without the experience in DR situations.  Working behind the scenes, we’re helping to coordinate and facilitate many hundreds of helicopter flights for dozens of NGO’s, both international and local, initially to provide rescue and aid in the aftermath of the twin earthquakes of April 25 and May 12, and now to provide ongoing relief to thousands of people in the most remote, and hardest hit regions of Nepal.

In my “normal” role in MAF I serve as a pilot, formally in Indonesia, and now in Uganda.  But DR situations are very dynamic, and the most effective response teams are comprised of people willing and able to fill multiple roles.  In this case, our MAF Nepal DR team is comprised of a handful of people from a number of MAF programs around the world—each person with a “normal” function and set of skills appropriate to that role, back on their home program, but filling a wide range of positions here…whatever it takes to get the job done.

In this situation I have been specifically tasked with overseeing the scheduling of the aircraft.  We receive many times more flight requests than we could possibly meet in any given day.  As you can imagine, virtually every flight request is “urgent”.  Many are considered “critical” by the agency requesting the flight.  Trying to utilize the two rotor wing assets at our disposal to their absolute maximum potential, with so many requests that are constantly changing, to so many locations where a helicopter has yet to land, is like trying to put together a huge jigsaw puzzle, when the picture on the box is constantly changing. It’s complex and dynamic, and requires patience, flexibility, and especially good teamwork.

And that’s something that I’ve really seen and appreciated here—good teamwork. I’m proud of our small MAF Nepal DR team, and what God has helped us to accomplish with the resources available, and the prayers and backing of so many people around the world. The figures are absolutely astounding when you look at the number of kilos carried, communities served, flights made, and lives saved, and/or impacted, by the flights that we’ve helped to facilitate so far.  Anyone familiar with this type of flight operation, knowing the types of conditions we’re working in, and the dynamic nature of the situation, would be shocked to see the stats.  But it’s so much more than numbers.  It’s about the people. Our team here is putting in unbelievable hours, in often unseen roles, to help bring hope to thousands—most of whom will never even know who to thank.  But it’s those people who make it all worth it!

Back to teamwork—our MAF Nepal DR team is so blessed to be working alongside Fishtail Air. From the CEO and Chairman, to the pilots, operations staff, and engineers, all the way down to the cleaning crews, the entire staff at Fishtail Air have been outstanding!  Every one of them, without exception, has gone the extra mile, again, and again, and again during the relief efforts.  Some of these have become good, personal friends of mine. A month ago we’d never met. We come from opposite sides of the world—from different cultures, different native languages, different faiths.  Yet, working closely together over many long hours in the cauldron of high-intensity disaster response, friendships often form quickly… or the opposite can happen. In this case I’m so glad to say that the MAF team, and the Fishtail Air team, have worked splendidly together, and in the process developed both mutual respect and solid friendships along the way.  It has been nothing, if not an honor, to work with such a dedicated staff,  who are equally committed to helping those that are desperately in need, and thankful for the coordination that MAF is providing within the massive NGO community here.

Soon, my five-week assignment to Nepal will come to an end. I’m looking forward to seeing my beautiful/amazing wife and kids again!  And before I know it I’ll be returning to life as a pilot in MAF’s Uganda program, half a world away. Others have already started to arrive here from MAF programs around the world, ready to swap out the initial MAF DR response team, our bodies weary from weeks of non-stop work, but our hearts filled with joy at the lives saved, people helped, and friendships forged.  Will I be back some day? I hope so, but only God knows.  What I do know is that I will always leave a part of my heart behind here in Nepal.  In the short time that I’ve been here, I’ve grown to love and appreciate the Nepalese people, and their beautiful country.  They are a kind, generous, compassionate, and determined people, and wherever I am in the world, my heart and prayers will always be with them—my new friends in Nepal, both those I’ve worked alongside, and those whom we’ve served together in a time of great need.
Posted by Dave at 7:48 AM