Day 2 we started the hiking portion of our journey. We snapped a picture just before departing Long Jelet. This was pretty much the last time we'd be dry, and smelling "normal" in the next week. 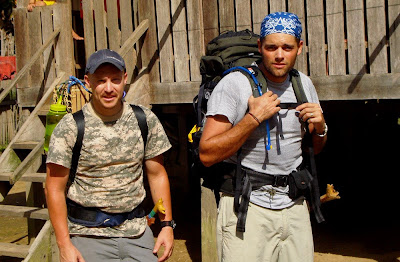 We kept a pretty good pace. But if you kept your eyes open, there was interesting stuff to see all over the place--like this mushroom, the size of a large grapefruit. 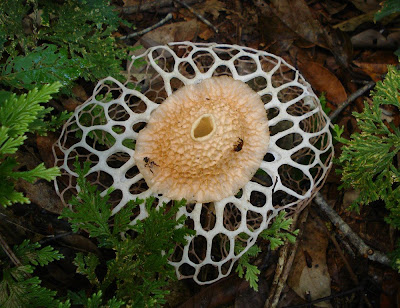 Much of the first hiking day was spent crisscrossing the Jelet river, as it wound it's way up into the mountains. There's no such thing as dry footwear when hiking in jungle! 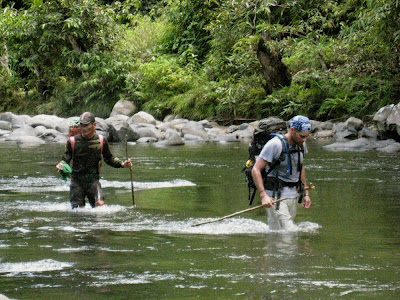 Actually, every time we came back down into the river, it was rather nice. B/c it was impossible to see the sky when we were under the canopy. We usually took a quick break on the river before crossing it and heading back into the jungle. Just after taking this picture of Paul, we saw our first Hornbills fly overhead. They were awesome! 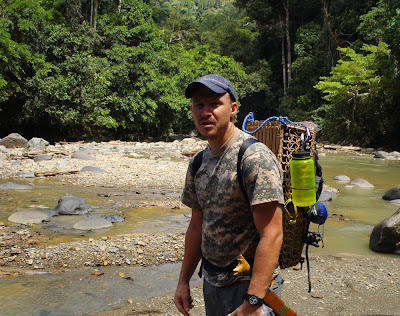 The first day was pretty light. We stopped a bit early b/c our guides had a pre-determined camp sight in mind--one which they've used before. The other reason was that from this point the trail would leave the river and we'd have to hike over the first mountain. They said that we wouldn't be able to make it to the next river in time to set up camp and since there were no good water sources on the mountain, this was our camp sight the first night. 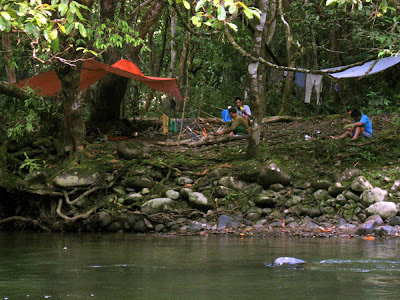 One of our guides, Pak (Mr.) Lajau, took us with him to go "fishing." He threw a small stone into a deep hole in the river. He said that this would attract the fish, since they would think that it was food. A few seconds later he threw a net over the area. He caught 12 nice fish in that one throw--more than enough to feed us all for supper, breakfast the next day, and lunch too. 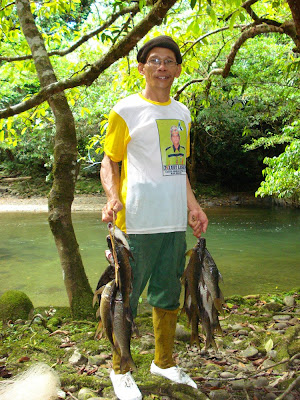 They love to eat their meat chopped up and boiled. But we're a bit more partial to the "grilled" flavor. So we boiled some, and stuck a few more on sticks over the fire. In the background is another one of our guides, Pak Musa. 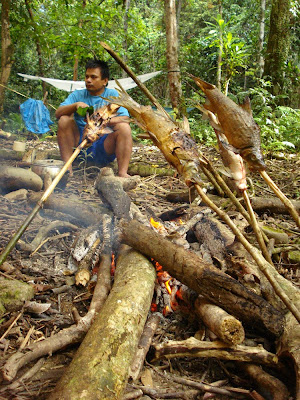 It was an absolutely beautiful location, complete with a dark, deep, pool in the little river. There's no telling what lives in there, but Paul and I jumped in for a refreshing swim. Of course, that's also where we washed clothes and took baths as well. From this point on we wore the same clothes every day for next week (except for one dry set for sleeping.) There was no point changing, as everything got dirty and wet as soon as it left the dry-bag. So we just washed the stuff as best we could in the river, and that was that. 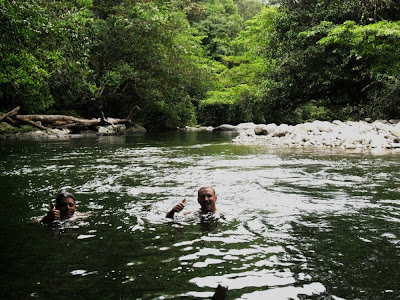 In the evenings, we really enjoyed sitting around the fire (in this picture we're sitting around the candle, with the fire just out of the picture) talking with our guides. Later I'll share some better pictures of them. They were really great men, and we had hours and hours to talk, both on the trails, as well as during meals. But especially at night we had fun, building friendships, recounting the days events, telling stories of other adventures, talking about our families, and eventually working into spiritual conversations. This is one of the opportunities that I most appreciate about a trip like this--getting to spend so much time with guys like this. Normally our flight schedules don't afford much extra time to build relationships on this level. 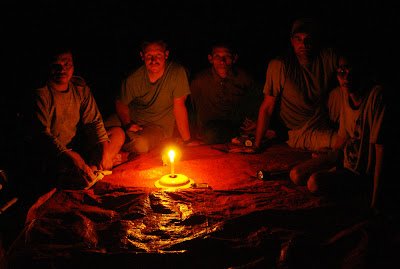 As we went to sleep, moths would come out by the dozens to sip the yummy juices from our wet clothes hanging on a rope (actually not sure why we hung them, since they always wound up being even wetter in the morning than they were when we hung them up at night). Britton would have loved it!!! 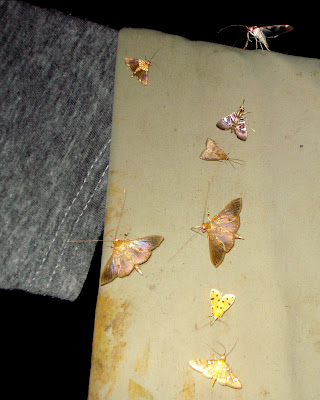 Wow...it is very interesting. the amazing journey!! i also wanna try it!!

Beautiful pictures. I like looking at them--not so sure I would want to be there. I'm more of a dry clothes person.

Your pictures are great! We can't wait to hear and see the rest of the adventure Dave.

Enjoying the excellent coverage of a once in a lifetime trip

You are amazing! I respect you so much for doing this trip. I love that you are godly, hardworking, handsome, and rugged! How did I ever get so lucky?
Your #1 admirer,
Joy

Wow, I've read the Jungle Trek 3 then the no 2. Great story Dave. And the mushroom, the fishing, the waterfall and the butterfly are owesome.