The third day we started really getting into "deep" forest. After splitting from the river, we took off on a barely visible trail, up the first of several mountains. We took this picture pretty early, maybe 9:00am, and check out my shirt and pants--they're totally soaked from sweat. Couldn't have been any wetter if I'd have jumped in a pool! 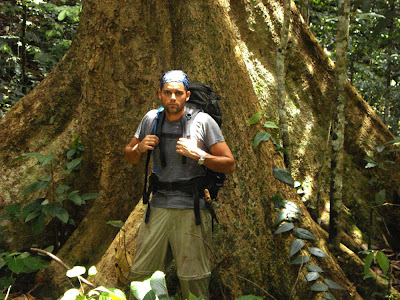 By now we were getting eaten alive by leaches, but the jungle was beautiful and we were enjoying it. 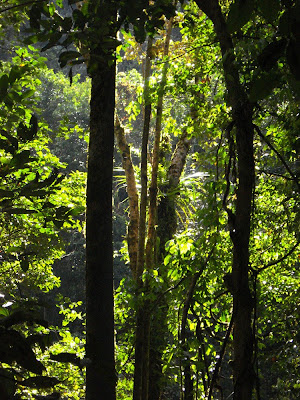 Sometime mid-morning, we heard the faint and distant sound of a little airplane. We had brought along a small, handheld VHF radio for this very purpose. It was difficult to get a good signal through the jungle canopy, but we made contact with the "outside world" today (Saturday), by communicating with Alan, high above in the comfort of a Cessna Caravan. It would be our last communication with anyone, other than ourselves, until Tuesday. If anything went wrong, we were absolutely on our own! 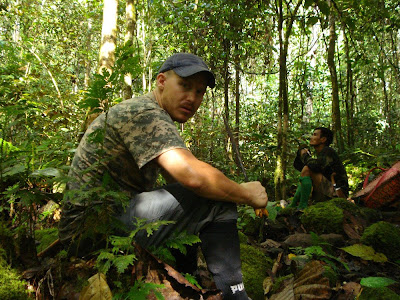 Around 1:00 we stopped for some cold rice and fish at the base of this pretty waterfall. The perspective was hard to capture with a point and shoot, but I'm standing at the base of it, and it's probably 40 feet tall, give or take. I had brought along a water filter, which was extremely useful. In addition to filling all of our water containers at night and before leaving in the morning, I also had to occasionally pump in the middle of the day at a place like this. None of us got sick on our stomachs, so it must have worked. 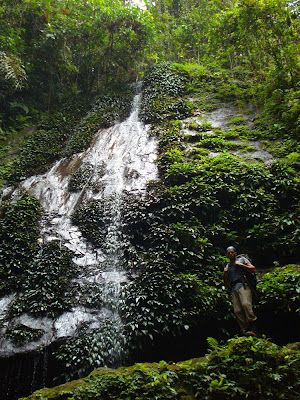 There were many strange and beautiful flowers, orchids, and blossoms of various kinds. However, they were usually to high or inaccessible to photograph with my little camera. Plus, the camera was already starting to succumb to the humidity, sweat, and general wetness of the jungle, despite the fact that I had it in a little air-tight Pelican. So I had to be careful when I took it out. 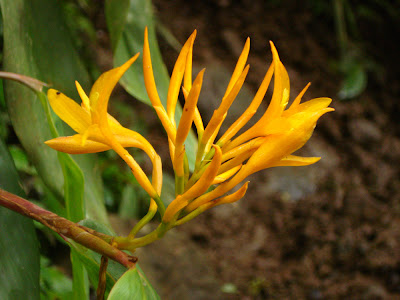 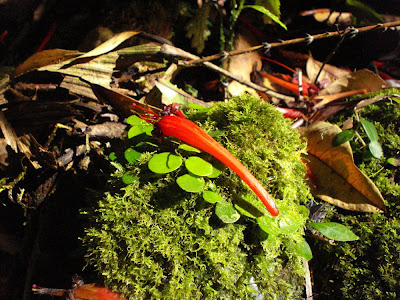 Around mid-afternoon we descended the mountain to this stream at the base of a gorge. For the next few hours we climbed deeper up into the headwaters of the gorge. It was very beautiful. Eventually we were basically bouldering over massive, slime-covered, dripping, slicker-than-snot rocks, occasionally cris-crossing the creak, but generally slithering along the 60 - 80 degree slopes on either side. 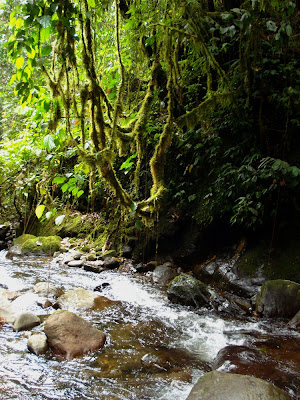 At some point in there, my cramp-on style, half-inch spikes that were strapped to my shoes busted, resulting in a nice shin gash. And thus began my dependence on Ibuprofen for the remainder of the trip. Between the thumping shin (which became swollen and really infected), a very bad knee, and all the other scrapes and bruises, I was thankful for the pain-dulling relief from my little bottle of pills. By the way, I fixed the cramp-ons with parachute chord and they worked awesome the rest of the trip! 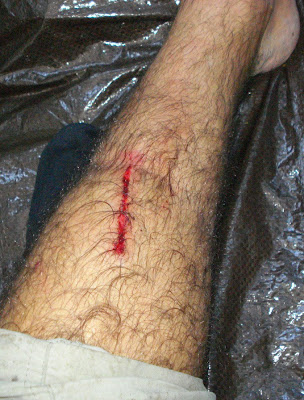 At one point we came to an open, flatter area in the creak. On the side was a huge stone cliff towering above us. At it's base was a wide, cave-like entrance with water drizzling off and out of all the cracks. It was a natural salt-water place, and the animals absolutely loved it! We were hoping to shoot something for dinner, but alas no such luck. There were however, thousands of animal tracks and droppings all over the place. Of course, I had to climb up into it to get a proper feel for the place, and of course to taste the salt water. It was definitely salty, but I couldn't be sure that it wasn't my own sweat that I was tasting. So here I was on the inside looking out. 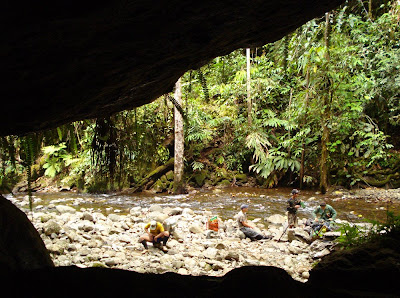 We stopped to set up camp near the head of the gorge. The jungle was very dense and primordial-looking. We nick-named this place, "hornbill gorge" b/c we saw dozens of huge, beautiful hornbills (they're big unique birds--look them up online if you want to see a picture) coming and going just before sunset and just after sunrise. 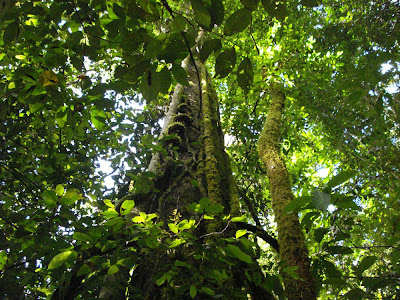 Our guides worked together to quickly construct their "pondok" (hut), under which they slept, and we all cooked and hung out together. It was good times as we hung out for hours each night, telling stories and talking about families, friends, other adventures, and spiritual things. 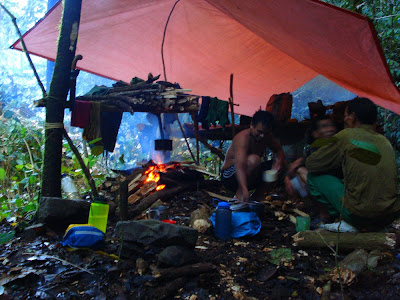 Paul and I had brought along Hennessy hammocks, so we always set them up right next to the pondok. I was able to stay dry and get a good night sleep hanging in a hammock above the leaches. 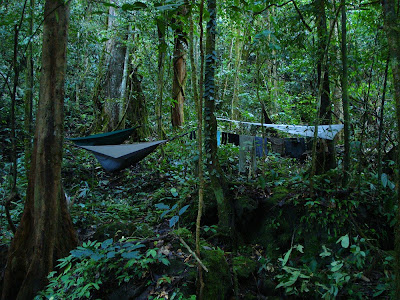 Just before bed a little tree frog of some sort jumped into the pondok and befriended Paul. There were so many weird bugs and frogs and other stuff that I obviously couldn't list them all. But this fellow was really cute. 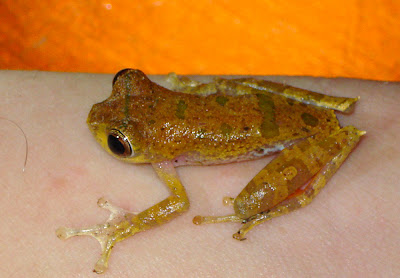 Well, that was day three. After changing into my one pair of dry clothes that I saved for night time, I got into my hammock and tried not to think about the fact that the guides said "tomorrow we go up, up, up and then up some more." Oh good. Now where did we leave the airplane again? 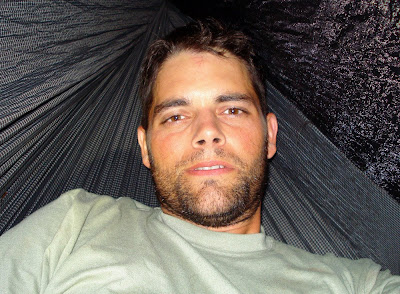 Beautiful pictures. It must have been awesome.

You're one tough dude.