Did I keep you in suspense, wondering what happened to us out in the jungle? Ya, I'm sure you were really on the edge of your seat. It's been busy around here, so I haven't had a chance to post the next update. 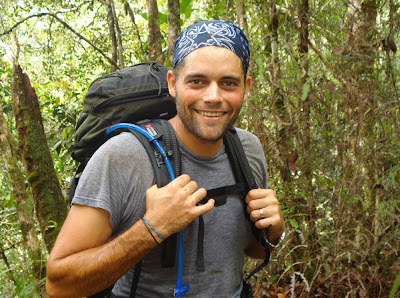 Well, the fourth day had us climbing up a huge mountain. The trail pretty much disappeared, and we just pulled and clawed and smooshed our way up, up, up the mountain. The guides were pretty much hacking there way through the entangled mess, sometimes splitting up in three different directions, b/c again, there was no trail. Eventually, we got to a place where they said, "Now we go up." Our thought was, "Well what the phat have we been doing for the past four hours?" And sure enough, we went basically straight up a very steep side of ridge, arriving in a cloud forest at the top. 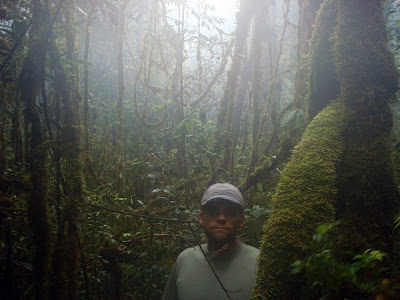 It began to rain, and we got soaked to the bone. And believe you me, it was cold. Don't ever let anyone tell you that it doesn't get cold on the equator. We were up close to 6,000 feet, and totally drenched and it was soooooooo cold! Even after the rain stopped, the clouds still engulfed us, and sent constant shivers down to our sloshing toes. 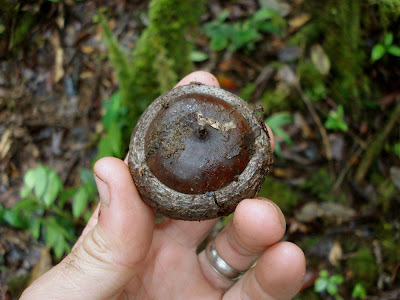 The weird thing is that there were HUGE oak trees up there. They were of "prehistoric" proportions. The leaves that had fallen to the ground were maybe 2 - 3 feet across. And the acorns!...I'd hate to see the saber tooth squirrel that it would take to down one of these babies! 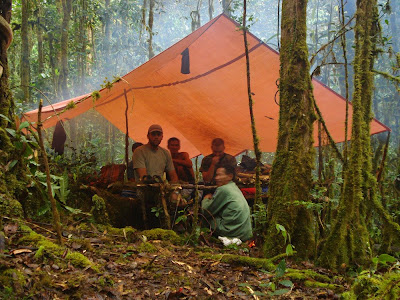 Well, we set up our camp, right up there in the eerie cloud forest. Every single stationary thing was covering in dripping, hairy moss. It was strangely quiet...and did I mention cold? 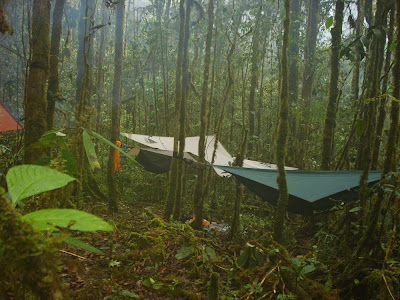 Paul and I had a bit of a hard time finding spots for our hammocks, b/c the trees were so thick. We wound up having to cut quite a few of those little buggers down. 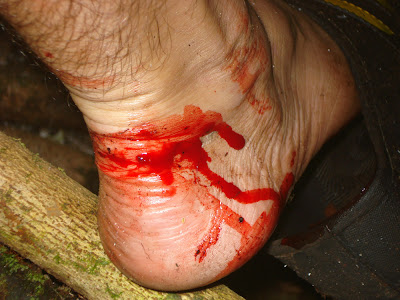 Our guides told us that there would be fewer leaches up here, b/c they don't like to get cold. The key word was "fewer". They didn't say "none." Yes, they continued to drink freely from our sweet, foreign blood. 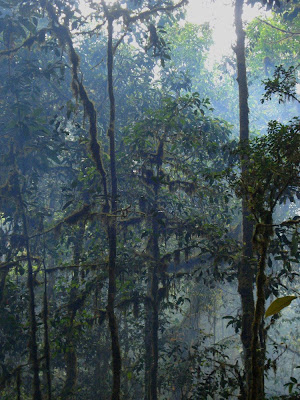 The next morning, as we woke up (day six), the sun was shining through the clouds, which still surrounded us. 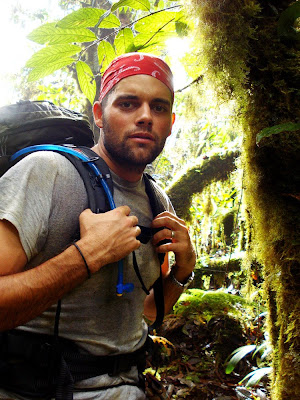 We started by hiking up some more. That's right. Apparently we weren't at the top yet. 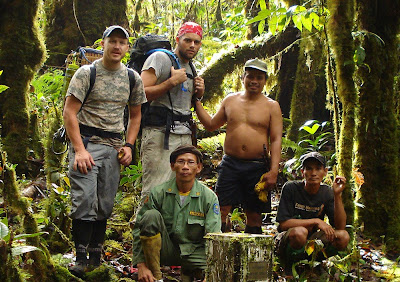 But alas, we finally reached the top, where there was a sign in the ground, indicating the dividing line between the two regions. In past times, if a person from one area had crossed this line, it was just about guaranteed that he'd lose his head to the people who's area he was entering. Fortunately, we didn't have to worry about that. 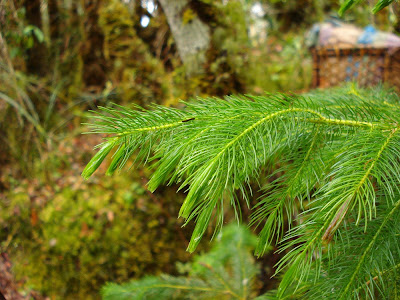 Just as we started to descend, we saw some strange flora. We were still up at a high altitude when we came across this...pine tree? I mean, it sure looked like a pine tree...and smelled like one too. And tasted like one. Don't ask. Anyway, I'm not a plant guy, so don't take my word for it. But it sure seemed to be a pine tree. If that's true, well, I had no idea that pine trees lived here. Our guides were pretty stoked too. They said they were going to dig it up and take it home on their way back, to plant in their village. But I doubt it will grow down at the lower elevations. 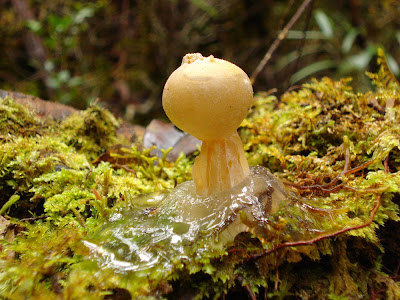 And then we saw this weird fungi thing. Of course, there's a zillion types of mushrooms in the jungle, but this one was just plain weird. It looked like some sort of ice-cream ball, which was oozing a clear jelly type stuff out it's base. Cool stuff. By the way, I didn't taste this one. 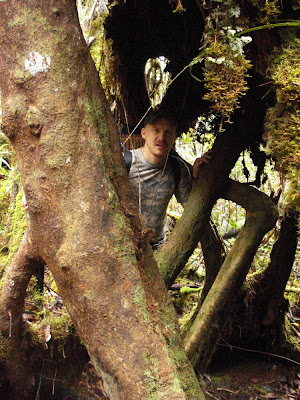 And we kept passing these huge, strangling fig trees, that were all hollowed out underneath, and were obviously being used as homes for wild pigs. So Paul and I both had to crawl inside to have a look around one of them. Not a bad set-up if you don't have a hammock...and aren't afraid to share your spot with a bunch of creepy-crawlies. 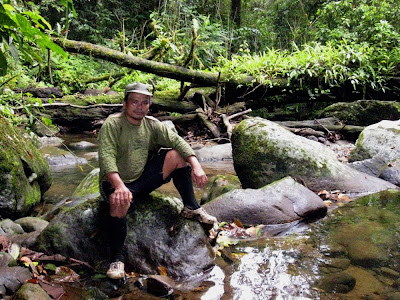 Finally, around mid-afternoon we came out to the Kat river. As you can see, with Musa sitting in front of it, this was more like a creek than a river. We still had a long way to go before we would MAYBE get picked up by the boat guys from Data Dian. And we were about to embark into "uncharted" territory. But more on that next time.
Posted by Dave at 11:35 AM

Yes! I've been waiting for your next post. Those things out there are just plain weird looking. Looking forward to the next post!

Okay, I wasn't exactly waiting on the "edge of my seat," but I was indeed looking forward to your next post! :) Thanks for the cool pictures & such detailed stories!

I came over from Joy's blog. My boys (ages 6,9,11) were anxious to hear what happened next! They are very interested in this missionary pilot and his hiking trip. Thank you for sharing it!