I have to warn you: if you you're grossed out by rats or snakes, OR if you especially like cute, fuzzy baby chicks, you should probably stop reading this blog post now! However, if you're like my sons, you'll probably love it!
Some of you may remember a blog post that my wife wrote last year. Just as she was starting into the first relaxing bath she'd ever taken here in Indonesia (just not something that happens very often here for a variety of reasons), she heard a loud snap on the other side of the wall, followed by an agonizing, relentless, high-pitched squealing noise. Turns out that my boys and I had caught us a nice rat in the gudang (shed) which shares a wall with the bathroom. Such is life in Indonesia--always plenty of critters and rodents to do battle with.
Well, the war continues! When I got back here last week, our gudang smelled like a bat cave...only there were no bats hanging on the ceiling. Hmmmm? What else could be making that smell. Lifting up our two car seats that were stored in there, I discovered a virtual farm-size pile of rodent manure. Guess we're done using those car seats. In fact, everywhere I turned there was rat poop! It's seriously nasty!
Well, that just made me mad. As if I didn't have enough to do already. The week before furlough I had to tear out all of the shelving in the gudang because of bad termites. Every last shelf came out, which meant that when I returned last week, there was nowhere to put our storage until I rebuilt all the shelves. So that's what I've been working on in my "spare time"--nights and weekend. But smelling rat poop while working late hours just doesn't sit well with me.
So the other day, while I'm in there I here some squealing behind some wood. I ran and got the pellet gun and a flashlight. Much to my surprise, I saw a small rat and a shrew in some sort of battle. They disappeared and then I caught a fleeting glimpse of one. I took a shot and killed it on the spot. (In case you're a rodent lover, don't worry, it didn't suffer.) Turns out I got the shrew. I'd rather have gotten the rat, but eventually I'll be getting them all one way or another. It's not very big, but you can see it hanging in my left hand. O.k, so it doesn't have a rack, but it's a nice hunting "trophy" for over here. 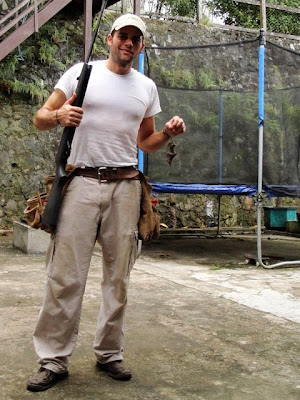 It made for a nice little meal, fried up on a bed of steamed rice. O.k. I'm kidding. I didn't eat the shrew. But several minutes later I heard more noises. Trust me, there's turf wars going on in my gudang. Well, I pulled a few more boards out and what do you think I found? That's right, a nest! 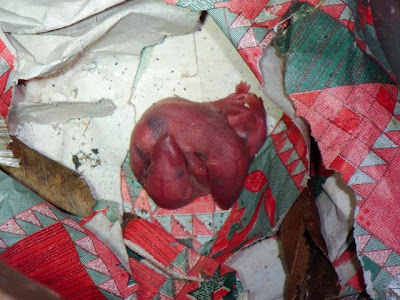 And inside were two little rodent babies. If you're smarter than me you can tell me if they're shrew babies or rat babies. I think they're shrews, but it really didn't make a difference to me. The rat was probably trying to get in there to eat them. Suddenly I was excited. You see, our pet reticulated python was hungry (he eats about once every three weeks), and that meant that I had to find time to run to the other side of town to buy a baby chicken. Yeah, that's what it usually eats--live, fuzzy, wuzzy, peeping baby chicks! I just didn't know where I'd find the time for that. Voila! Fresh veal...or rodent. So I dropped those poor little smokies in the tank and I can almost promise you I saw that handsome snake flash me a happy grin. 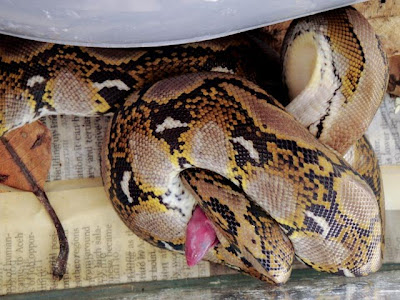 Then, in one lightening-fast strike, he'd grabbed both of them at the same time in his toothy mouth, and he was squeezing for all he was worth. Is that more detail than you were interested in? I warned you. Just keep in mind, these little baby sausages were going to grow up to by whiskery, smelly rodents with long tales, dropping presents for me in my gudang. And besides, snakes need to eat too! Incidentally, isn't that a beautiful snake?
Keep in mind, I'm here by myself. What else is a guy supposed to do for fun on a hard work day? I killed about three birds (er, um rodents) with one stone! It was great! What do you think, does this officially qualify for the first official Indonesian redneck sport--rodent hunting followed by snake feeding?

O.k. I'm ready for all the nasty comments. I can already hear them coming from my wife, mom, Carrie K, and others.
Posted by Dave at 4:29 PM

Oh Dave - I feel so honored to be mentioned. HA! OK, so want the shocking news? I have NO PROBLEM with killing shrews or rats - ever since they moved into our house while we were gone and totally made themselves at home, I have hated them. Kill away, feed them to your snake. Doesn't bother me. Now, the baby chicks - you might have to pay for that! :-) AND I had to cover my eyes with the snake picture. YIKES! :-P

Killing rats is fine with me! You and my husband would get a long perfectly!

Just think of the over population of those nasty things if we didn't have brave men like you (and my hubby) who aren't afraid to "off them"! A man's gotta do what a man's gotta do...cause Lord knows I am not doing it!!!

Found your blog via Joy's a while back. This brings back memories! Rats the size of small cats lived in our shed when we lived in PNG.

We used to lock our dog up in the shed at night and he would catch the rats for us. Very proud of himself, he was. I know, he was meant to be a watchdog...but he was too nice and the neighbours blamed him for every dog barking at night, so in the interest of peace we kept him sequestered where he would do more good!

Dave
You and my missionary son in Peru would get along just great.
thetuttletribe.blogspot.com

LOL! Glad you are having "fun"! :) Great pictures and I agree, the snake is looking good, seems like he's growing a lot!