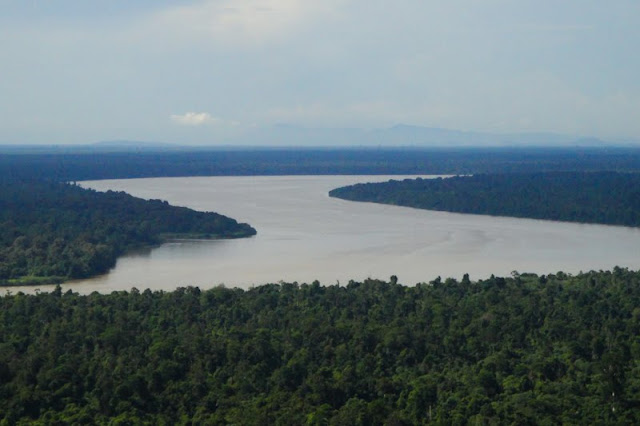 Last week I had the privilege of flying an Indonesian Christian medical team into the village of Long Nawang.  This is the third time that these dear ladies have come all the way from Java to minister to the people in the Apo Kayan area.  I just think it's so awesome to see Indonesians reaching out and ministering to meet the needs (both physically and spiritually) of their "neighbors" in remote parts of their own country.  But again, without the wings of MAF, this would almost certainly not be taking place.  It is a one and a half hour flight from Tarakan direct to Long Nawang.  Traveling there by foot and boat would take at least two months one way!  It's so exciting to be playing such a small but vital role in the national ministry that's ongoing here!  Anyway, in addition to medically treating hundreds of people, the women also held Sunday School style classes for kids and had various other meetings with folks in several villages.  Cool stuff! 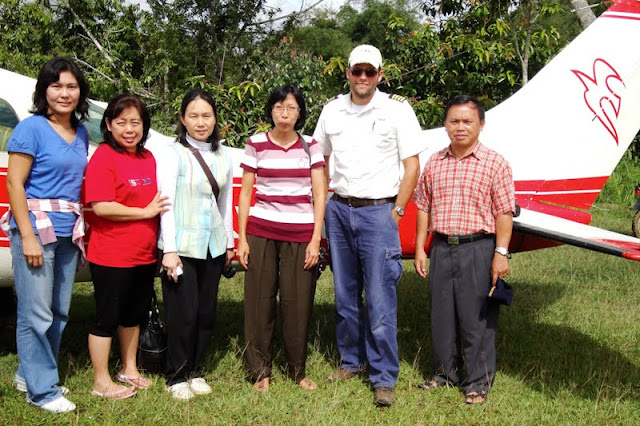 Here's the airstrip and village (in the background) of Long Nawang.  It's a short strip, but those of you that have flown or been here in the past will notice that it's been improved some.  Though only a few meters longer, it's been made straighter and wider than previously. 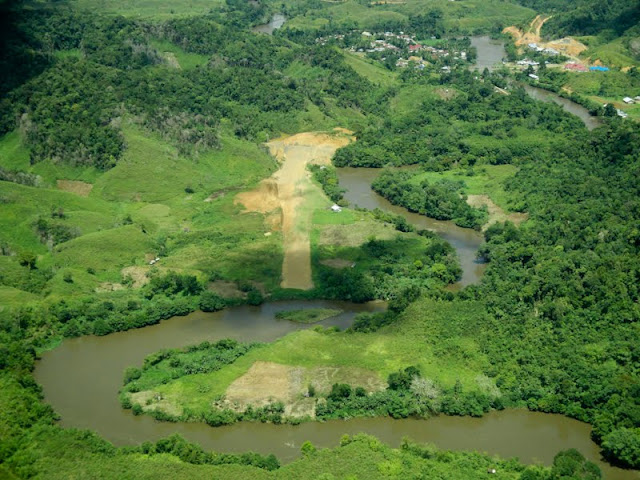 Several of us pilots were also very busy for the first half of the week flying people back out of Long Layu after a HUGE church conference that took place there.  It only happens once every five years, and usually not in a location that remote.  People came from all over East Kalimantan.  All in all we flew about 180 people into and out of Long Layu.  The village and church were extremely grateful, as this would never have been able to work without the help of MAF!


On Saturday I got called in for a medevac.  I had a lot of medevac flights this week.  In fact, on Thursday, I flew all day, mostly just taking medevac patients from remote villages to Malinau and Tarkan.  But since this one was on a Saturday I got to take one of my kids along.  Hannah had never been along on an "operational flight" before, so it was her turn!  The picture says it all.  She had a blast, and I was thrilled to have her along.  The patient we picked up in Long Ampung had fallen head first from about 20 feet up while working on making a bridge.  He was in what I would consider critical condition with head and neck injuries.  I don't mean to keep saying the same thing over and over, but it's the truth...without MAF, he would have never stood a chance! 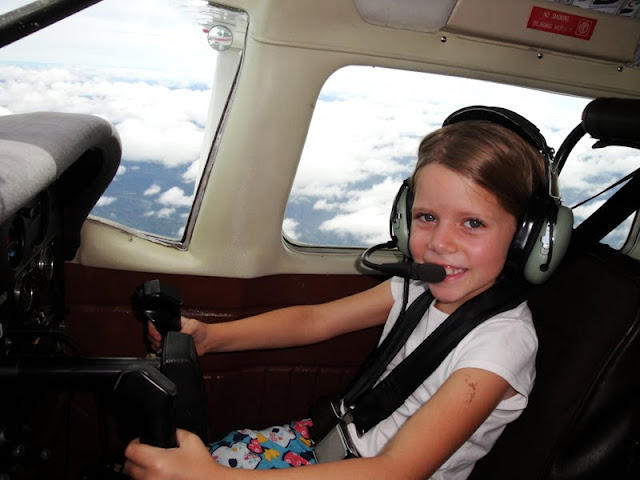 Of course, I also had my fair share of "unusual passengers".  This was actually last week, but I didn't include flight updates on last week's post.  This is a horn bill.  They are obviously very large birds!  I've seen them a few times from the air, usually flying in pairs or small groups over very remote and dense virgin jungle.  They're very majestic, gorgeous birds, especially when viewed in flight like that.  I've also seen them from down under the canopy on the jungle treks that Paul and I have done.  Again, very impressive!  But this is the first time I've seen one up close.  I was a little sad to see it like this, but apparently the guy actually rescued it two years ago when he was out hunting pigs in the jungle.  He said it was a baby and had fallen or something and couldn't fly.  So he brought it home and raised it.  It was actually quite friendly, though I was a little nervous with it's massive beak so close to my face.  I mean, seriously, that thing could have probably pecked my schnoz right off of my face if it wanted to!  The box was vine wrapping was simply used to render it "immobile" for the flight.  Can you imagine if a bird that large (or any size for that matter) got loose in the cockpit while flying?  Yikes! 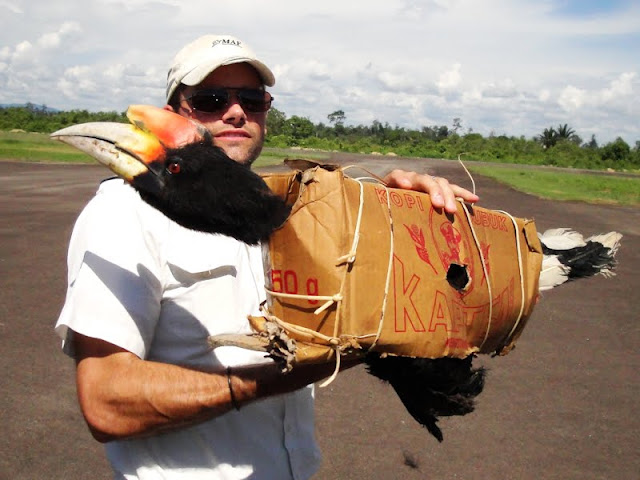 Last Sunday I took my boys and the College boys (Paul, their dad, is back in the U.S. for a few weeks of flight training on the new Kodiak airplane) out into the jungle for some guy time.  Their were seven boys plus me!  From left to right:  Tanner, Blake, Seth, Tyler, Britton, Tate, Hudson.  We had a blast! 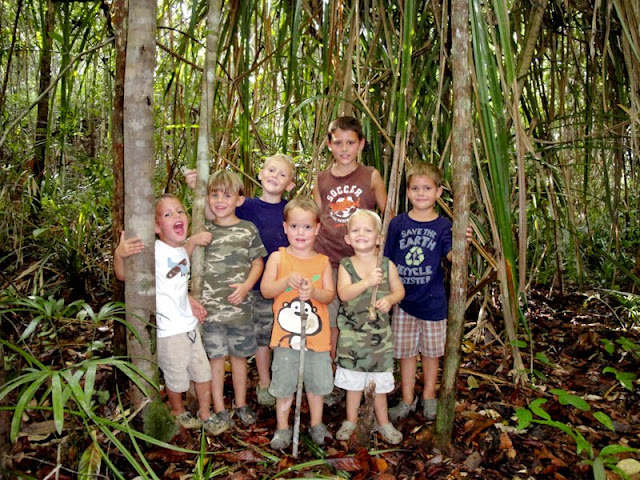 I cut a vine in a safe place so they could each get their fill of Tarzan swings.  Tanner is taking a turn below, while the other boys watch in the background. 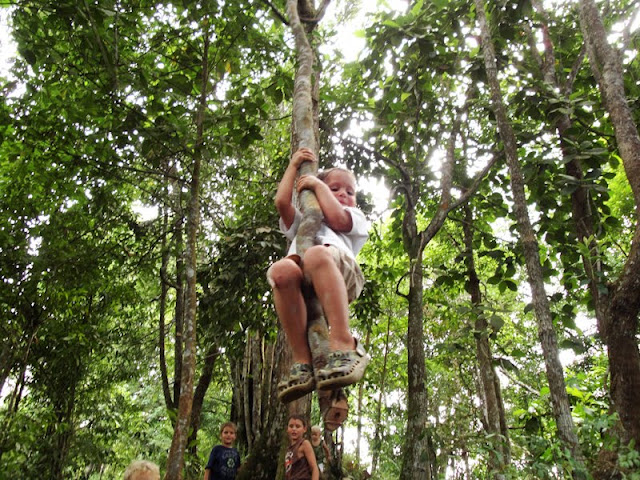 A few shots from the "office window".    This is one of the rare times when Mount Hebon is in the clear.  It's one of the tallest peaks around (about 8,000 feet) and is most often obscured by clouds and rain. 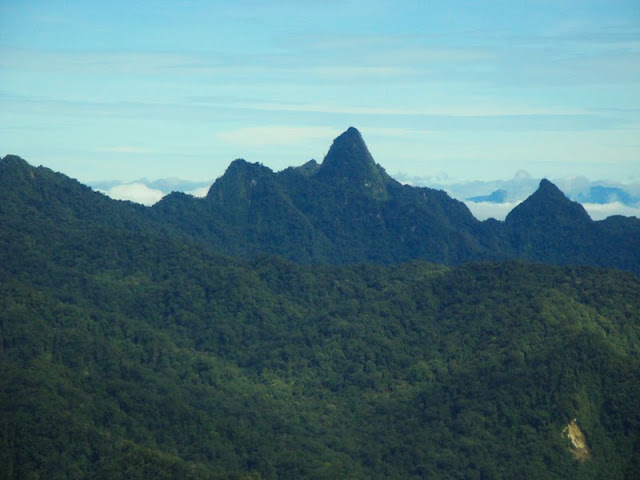 Waterfalls are abundant in the Apo Kayan region.  Hannah got to see a bunch on Saturday because the weather was unusually nice.  On this large mountain near the Bahau / Kayan River junctions, there are nearly a dozen waterfalls that are large enough to see from several thousand feet up.  In this picture you can see three of them.  I know they look small here, but keep in mind that I'm about a mile away. 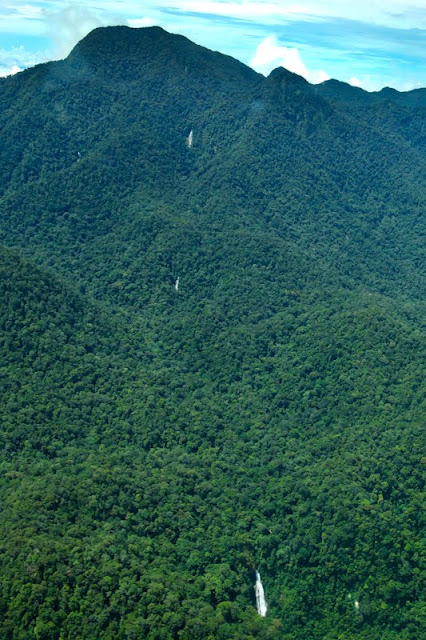 Here's two more closer to the Long Ampung area.  Most of these falls are so remote that I doubt if anyone has ever gone to them by foot.  I have to admit, I have about a hundred treks l'd love to do if I ever had the time and resources to do them.  Places like this just seem to draw me in! 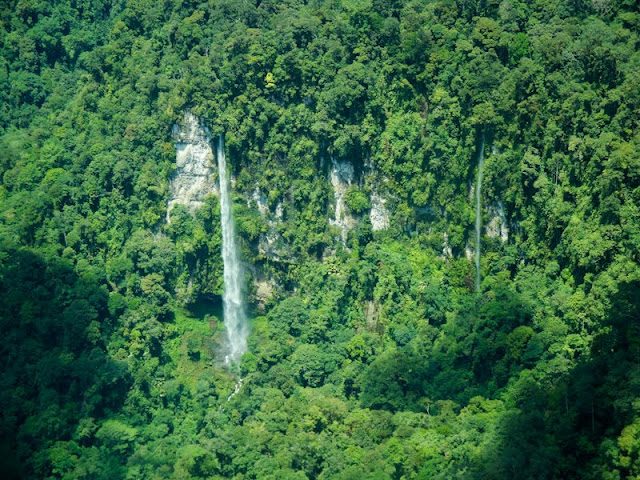 Been seeing a lot of rainbows lately--usually several each day.  If you look closely, you can see the second (double) rainbow in the background.  Doubles are pretty common, but I've only seen a triple once. 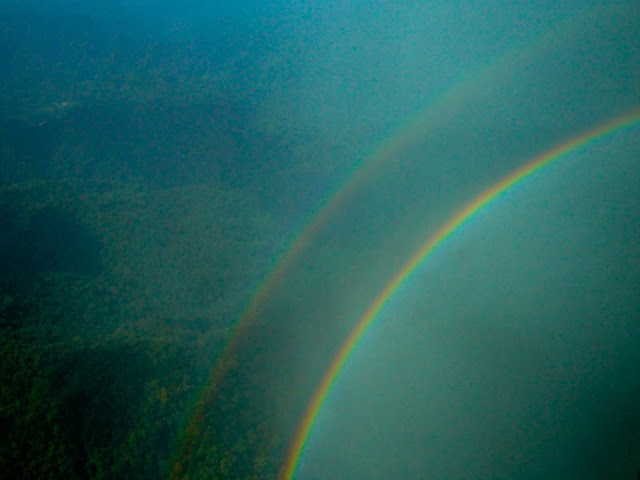 This is not unusual weather in the Krayan region in the morning--one of the reasons we usually can't get going from Tarakan earlier than about 7:30am.  On this particular morning I was trying to get into Long Layu at about 8:30am (a one-hour flight from Tarakan) and had to circle for about 15 minutes before the morning fog and clouds lifted and broke up enough to allow for a safe descent and landing. 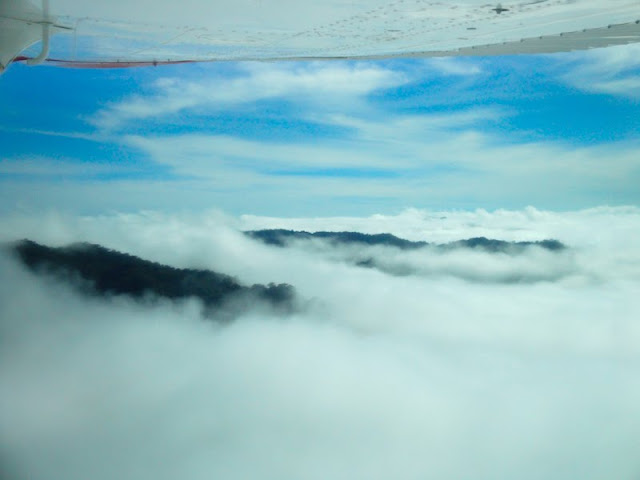 Of course, this is an entirely different type of weather.  Sorry, you probably think this stuff is boring, but I love weather.  This is an example of the typical early afternoon weather that builds up over the rugged terrain as the hot moist air gets pushed up and cooled.  Obviously I took the picture from a safe distance, where I was still in nice weather, but you can see why we have to be so careful to keep a close eye on weather out here.  It's probably one of the biggest challenges to operating safely in these remote locations.  There's no weather reporting stations in between villages, and sometimes these showers can form impenetrable lines of nasty thunderstorms, that you wouldn't want to go anywhere near in a little plane! 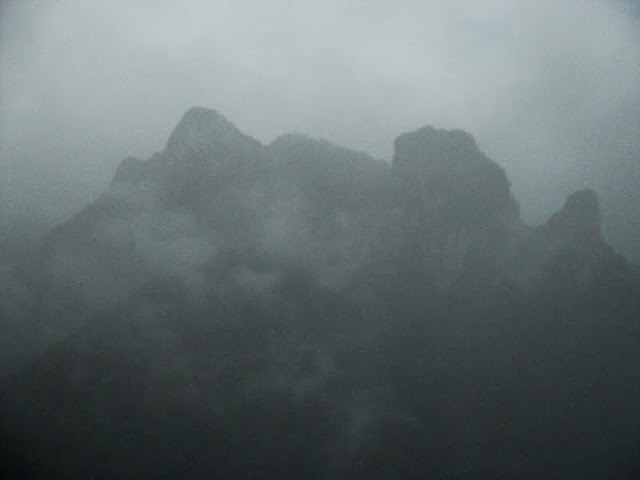 Large afternoon thunderstorms are common over the flatter areas.  This one is still in the developing stages, but again, it would be foolish to approach even within a few miles of a large storm because of the violent wind shear, turbulence, etc that often accompanies these storms. 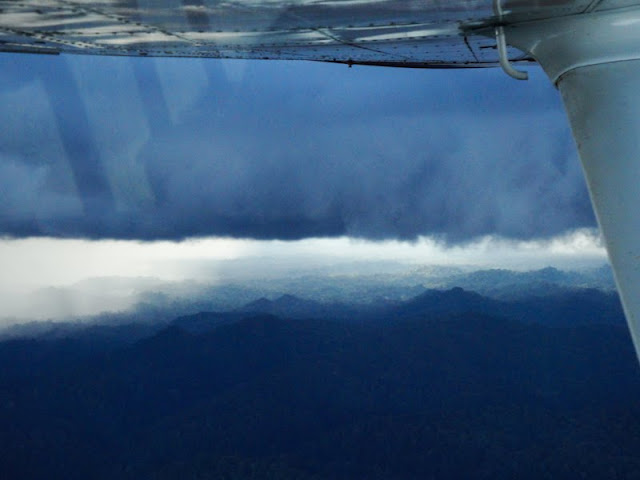 I'll end with a more "pleasant" rain shot.  This is a classic example of what happens all over the jungle nearly every single day.  Showers build up, rain themselves out and leave a trail of low clouds or fog behind in the canopy, as the moisture immediately begins to evaporate and start the process all over again.  These "fog trails" can quickly tell an observant pilot exactly which direction the rain is headed, because they stretch out for a few miles behind the advancing shower. 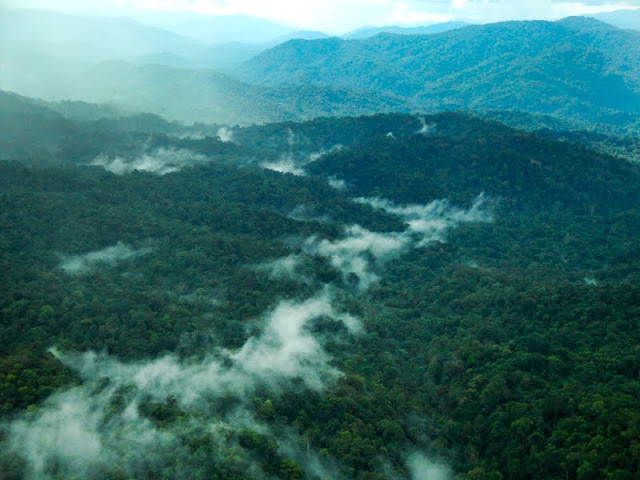 Well, there you go.  Weather (misspelled on purpose) you like it or not, you got to learn a little about tropical weather today.    Just be glad you're not Hannah--she got an entire semester's worth of weather info on Saturday.  Hey, she seemed interested!  Anyway, I never grow tired of it.  Every day, even if I'm flying over the same areas I've been over a hundred times, I always love seeing how the Lord paints it new and fresh.  My photos never capture these scenes in all their glory.  You'd have to come along in person to get the true experience!
Posted by Dave at 9:29 AM

Email ThisBlogThis!Share to TwitterShare to FacebookShare to Pinterest
Labels: Day in the Mission Pilot's Life, Our Kids, View From My Office Window

I really enjoyed this post! Guess I like weather, too! lol Seriously, though, loved all the pictures and I have to agree that those waterfalls do look really neat...I have similar pictures of waterfalls in the tepuis of Venezuela because they stand out against the black rocks when flying overhead. ¡Dios te bendiga!

Awesome pictures. Glad you are blogging so we can get a snapshot into your life.

You should have added this little weather lesson complete with pictures to my checkout!

WOW! I am always amazed at the awesome pictures I see when I come here. Don't mind your going on about the weather at all; actually, it's important to me, too, regarding laundry!