Riots and a Checkout

This week I got checked out at Long Pala--definitely the most marginal Cessna 206 airstrip in all of Kalimantan, and probably one of MAF's most marginal strips used by 206's in the entire world. 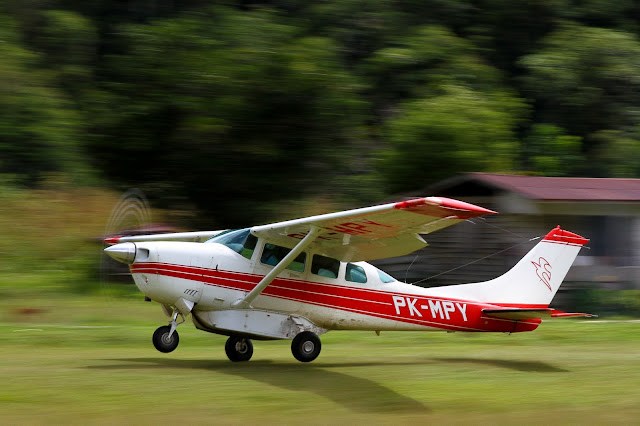 But before going to Long Pala, we stopped in Lumbis so another one of our pilots could get checked out at that airstrip.  You may remember when I got my checkout there back in April.  If not, go here to read about it and see pictures.  Anyway, the folks there love to watch the airplane, almost as much as they love to watch me taking pictures and video of the airplane.  Aren't they cute, all lined up in the long house behind me, peaking through the window slat? 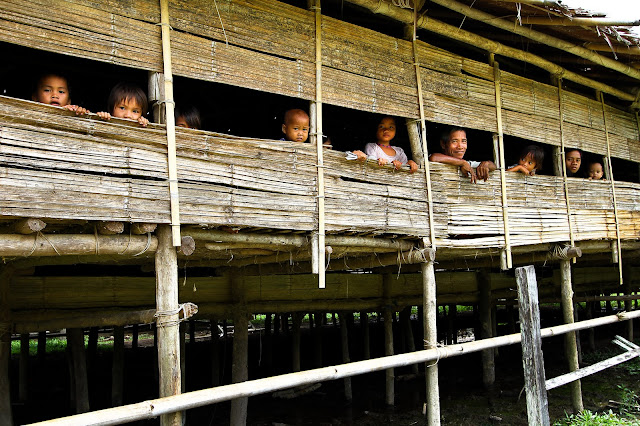 I think some of these kids were practicing their grown-up faces.  It's not customary for adult Dayak people to smile in a photo.  In fact, they usually go with a very serious look.  The truth is that they actually like their picture being taken, and often ask for photos.  However, as soon as the camera points their way, they suddenly become stoic.  But with the kids, smiles and laughs are everywhere...except in Lumbis apparently.  Perhaps they're practicing? 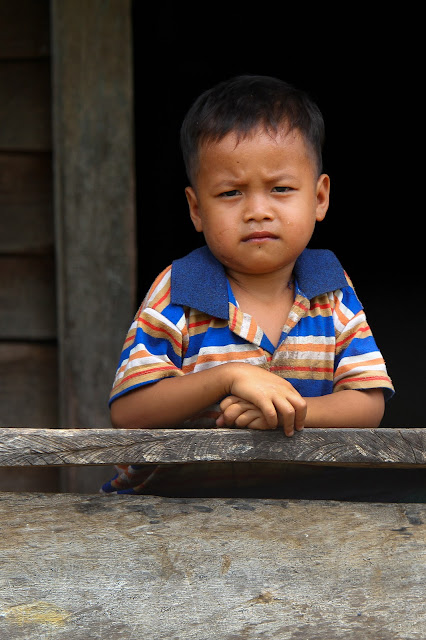 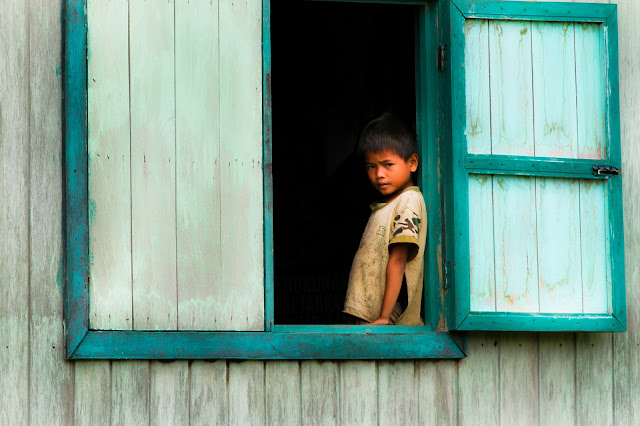 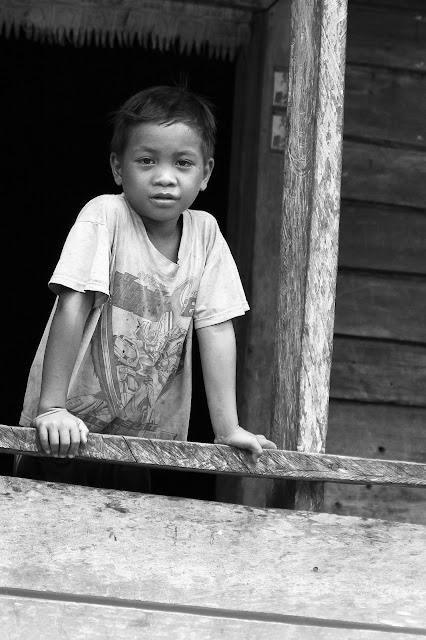 Well after Lumbis we headed over to Long Pala, 10 minutes away.  This was originally used as a Cessna 185 strip.  It's extremely short and extremely slippery when wet.  The conditions of both the strip and the weather have to be very good to land here.  Even so, it requires extreme precision in the approach, touchdown and braking, as well as on the takeoff.  For you pilot types, the strip is limited to Turbo 206's only.  Our normally aspirated 206 is not authorized.  Even so, the TU206 is very limited on takeoff (minus 550 lbs under Cessna gross in perfect conditions,) and it still requires a maximum performance style takeoff, with a Vx20 climb to at least 500'AGL.  AND, it's limited on landing weight as well (at least 330 lbs under Cessna gross).  All that to say, it's a tight strip! 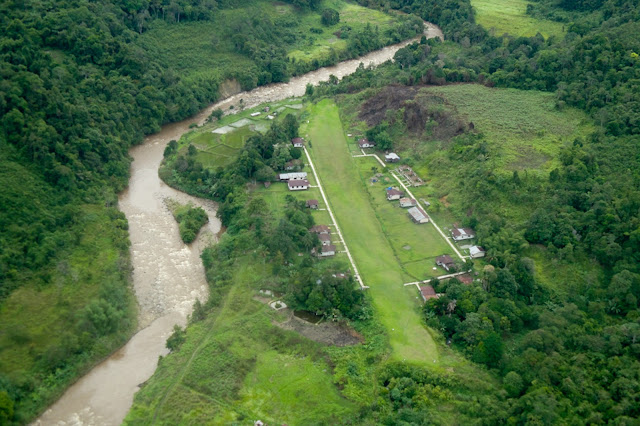 In this picture it looks benign.  To the non-pilot, this might look a lot nicer than those crazy muddy strips that look like you could sled down them.  Well it might look nice, but short, slippery, and virtually flat make for an aircraft carrier feel.  So why do we go in here? 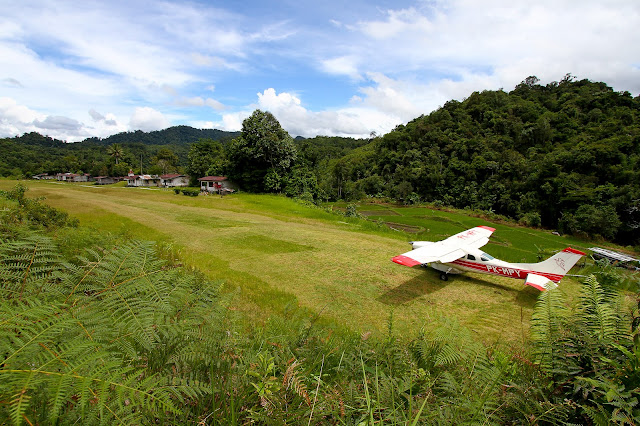 Because some of the coolest flying we do happens in Pala and Lumbis.  Several times a month we fly Indonesian church leaders and pastors into these villages where they do Theological Training by Extension.  Basically, that means we fly them into the village one day, and they teach the men and women the Word!  Then, the next day or a few days later, we fly the teachers back out.  It's basically a culturally-relevant Bible School, that comes to them!  I'm really looking forward to being a part of this! 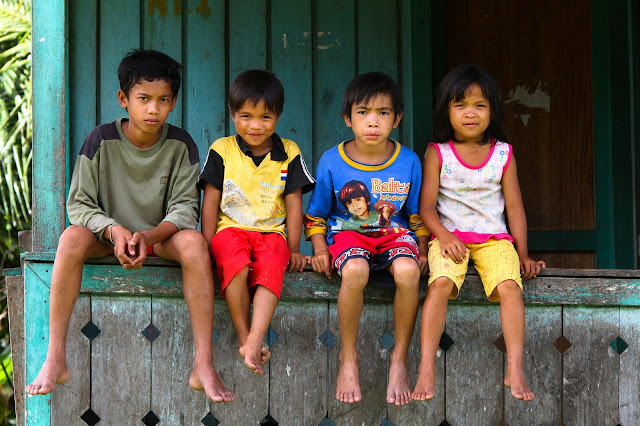 In other news, our quiet little town of Tarakan was rocked this week by ethnic violence.   I think we've often taken for granted how safe and calm our home here is.  But we realized this week how quickly that can change.  On Monday night a Tidung tribal elder was killed by a group of Bugis people.  This quickly led to anger and the desire for revenge.  By Tuesday there were gangs of hundreds of men armed with machetes, spears and knives, literally ready to make war against each other.  Though their focus was on each other, the tensions were very high all over town, and by Tuesday evening several more people had been killed and others injured.  The situation was quickly spiraling out of control.

There was an eerie silence over Tarakan Tuesday night.  Normally the call to prayer can be heard from all directions from the numerous mosques throughout town.  It was quite chilling actually, to hear only silence at the normal time for the Muslim call to prayer.  Every single store was locked, and no one was out on the streets.  That evening the police imposed a curfew of 5:00pm.  But it didn't stop the roaming gangs.  That night the violence erupted even more, and gunshots could be heard near the center of town.  The police were out-manned and unable to do anything to stop it.

Wednesday morning I showed up at the hangar at 7:00am ready to fly, but instead we were told to prepare the planes for evacuation and then go home at pack bags for the family.  This is the kind of stuff that's supposed to happen elsewhere, not here.  We spent the rest of the day Wednesday, with bags packed and planes fueled, ready for an immediate evacuation if the need arose.  But we all stayed in our homes, keeping a low profile.  Again, the conflict was between two specific ethnic groups, but with tensions that high, anything can happen.  Locals were fleeing by the hundreds, or thousands, to the military bases on the island.  The more wealthy ones were leaving Tarakan on commercial flights.  Everything was booked full.  Tarakan was beginning to feel like a ghost town.

Fortunately the Indonesian government sent in several plane loads of special police and military guys, that took up very visible positions all over town .  Wednesday night there was a peace deal brokered between the two ethnic groups.  That deal is still holding, though I'd say the tensions are still very high in town.  The military and police units are still in place, and apparently will be for some time.  It's a bit strange to have guys with machine guns guarding the entrance to MAF, the main airport, the port, and various buildings and intersections around town.  But it's really reminded us of how much we have to be thankful for.

Please pray for Tarakan, and specifically for the Tidung and Bugis people.  Pray that they would be able to know true peace and forgiveness--lasting peace.  Pray that those of us with MAF, and our local friends that are like-minded, would be able to use this as an opportunity to show them the Way to that peace.  We love these people and it breaks our heart to see a tragedy like this.  But we believe that God can ultimately use even this for His glory.  Please pray to that end.
Posted by Dave at 3:04 PM

Thanks for sharing. We will definitely be praying.

Well guys, we have been praying for you and the rest of the MAF team there since we heard about it on Facebook. As you might have heard, things got a bit rocky in Ecuador this week as well, though as of now, things have calmed down and my brother and his wife have been fine in Shell. Lots of craziness and prayers...thankfully we know the One who is in control.

You're in our prayers!
-The Hammond Family