Yesterday after an early morning run, I left my shoes on the front porch.  This morning at 6:00 I went out to put them on and smelled something funny.  It smelled like a strong herb or juicy weed of some kind.  Joy was reading her Bible in the living room and saw me sniffing my shoes over and over.  Of course, she wondered what in the world I was doing. 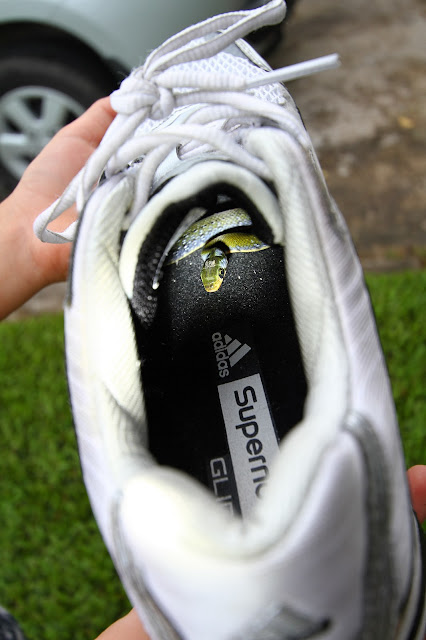 Well, I brought them inside as I explained that I kept smelling something weird--not really a bad smell, just a strange smell.  She thought I was nuts till a few seconds later she too caught a whiff.  These types of things drive me crazy, so I had to find the source.  Nothing was obvious, so I started searching deeper.  Pretty soon I was sticking my schnoz down into the shoe, when suddenly I saw something move...or maybe I just sensed it.  One thing is for certain--it freaked me out!!!  Joy screamed!  I yelled for Britton.  The neighbor boy heard Joy's scream and came running. 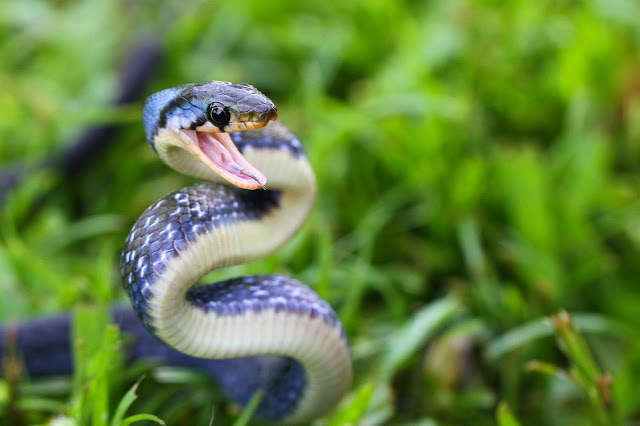 Ah, yes.  The snake saga continues.  This time it was a little "harmless" rat snake.  Britton and the neighbor boy, Carter, were all too excited to identify him/her and instigate the cobra-like, self-defense mechanism that this snake is known for. 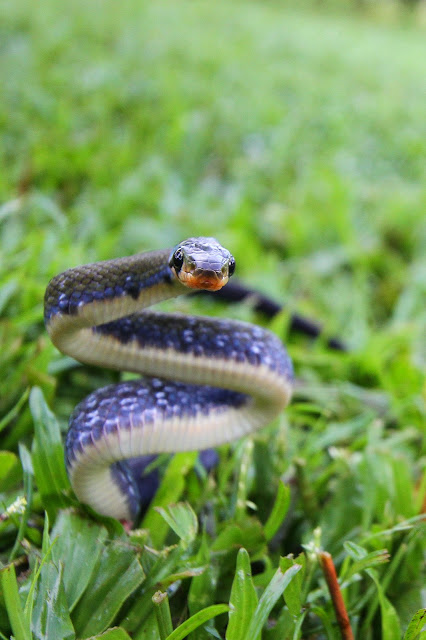 After positively making sure that it was not poisonous, I allowed the boys to handle the snake.  It didn't take long before they excitedly remarked, "It's bite doesn't even hurt that much compared to other snakes."  Is this a normal thing to hear your 10 year old kid saying???

Meanwhile, in the living room, I heard Joy saying something entirely different to the other kids.  "Close all the doors and lock them.  I'm moving to Siberia!"

After it was all over, we had to laugh.  I mean, the whole idea of me sniffing my nose right into the forked-tongue of a lounging snake in my shoe...yeah, it's pretty funny.  I guess the snake was putting out that scent as a warning or something.  But for me it didn't work--I almost got my snout bitten.
Posted by Dave at 2:58 AM

Whoa! I wonder why that made me laugh?

Before putting on my shoes in the tropics I have always banged them against the floor to rid them of anything that might have taken up residence since their last use. I have never found anything and I thought that my routine was stupid. Now you have just given me precedence that I am only a little crazy and I will continue to bang my shoes for critters before using them. Thanks for taking one for the team.

Yikes. But Joy, don't forget about the Siberian Pit viper.

Oh my nightmare! So not funny. Even though we had suburban snakes growing up and my mom would catch them and bring them in the house . . . so different.
"It's bite doesn't even hurt that much compared to other snakes." Is this a normal thing to hear your 10 year old kid saying???
So not normal, but completely classic. Should make a shirt with that on it.

Now you know why Indonesians (and smart Americans) wear flip-flops all the time.

I began dumping out my boots when we started getting scorpions in the house. But I never found one in my boot (just the dishwasher) so the habit wore off.

That is so cool! I would mind finding a snake in my shoe, as long as I could identify it. My family would freak. That is so cool. Praise God!