As part of their commemoration of Idul Adha, (or Eid al-Adha,) the "Festival of Sacrifice," Muslims offer animal sacrifices (usually goats or cows here in Tarakan).  The mood after morning prayers turns very "festive."  Many people exchange gifts.  By 9:00am the streets are full of people, gathering in front of every small Mosque and many homes to sacrifice their animals. 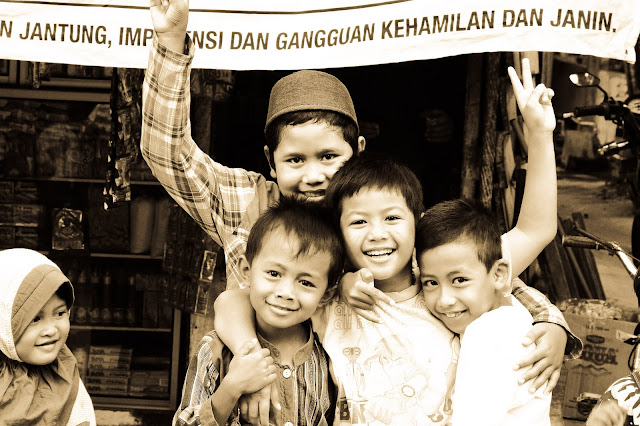 This is done--according to Islamic beliefs--"To commemorate the willingness of Abraham (Ibrahim) to sacrifice his son Ishmael (Isma'il) as an act of obedience to God, before God intervened to provide him with a ram to sacrifice instead." - from this article.  So Muslims must offer up a non-blemished animal as a demonstration of their own willingness to offer up their "best" to Allah, and hold nothing back.

Why the banana leaf?  Well that's being used as a shield to protect the bystanders, including me, from spraying blood.  I was asked to get right up in there to take pictures.  They kept telling me to "come closer, come in closer!" Two years ago we observed at this same Mosque and I later gave printed copies of the pictures I snapped to the folks there.  Apparently that was a big hit, as they welcomed us back warmly! 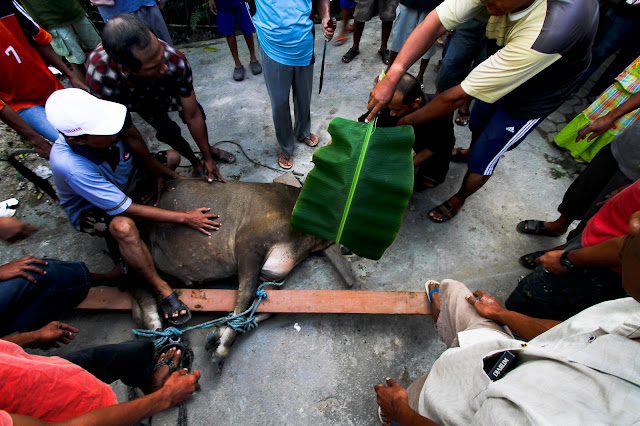 The animals are always killed in the same way, by slicing the neck (and jugular vein) and allowing the animal to bleed to death over several minutes.  The animal is bound with numerous ropes and tied to a heavy wooden beam, but still fights and struggles as it's life is taken. 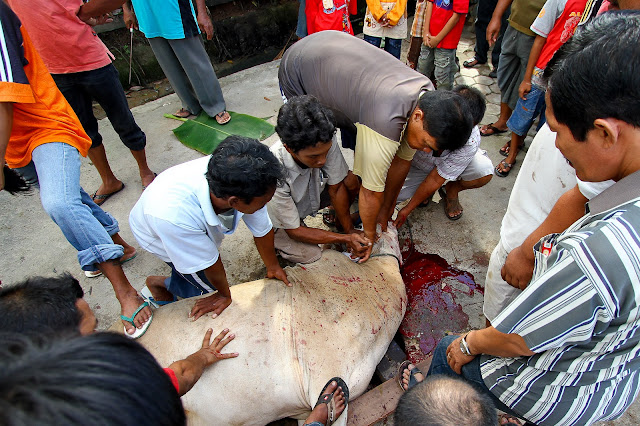 Obviously it's a very bloody and graphic event.  These photos were taken during the sacrifice of the first of six bulls and a goat that were taking place just at this one, small Mosque alone.  You can imagine how raw and gritty the scene was.  The intensity crescendoed as more and more blood was spilt, and the men chanted in a rhythmic unity, "Allah akbar..." 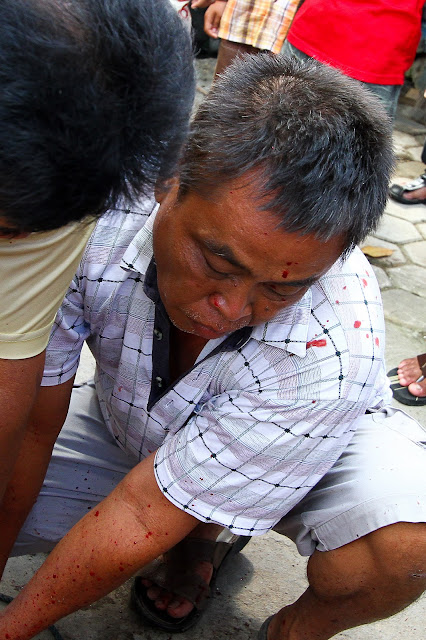 Meanwhile, my family, along with other women, kids and spectators (including neighbors and friends of several other faiths from the neighborhood,) stood and watched from a distance.  The mood is both festive, somber, and surreal all at the same time.  But I can't overemphasize how friendly everyone was to us.  The smiling man in the picture below sums it all up--they were thrilled that we would show enough interest to be there--though Hudson's facial expression betrays his feelings of uncertainty at watching a bull bleed to death. 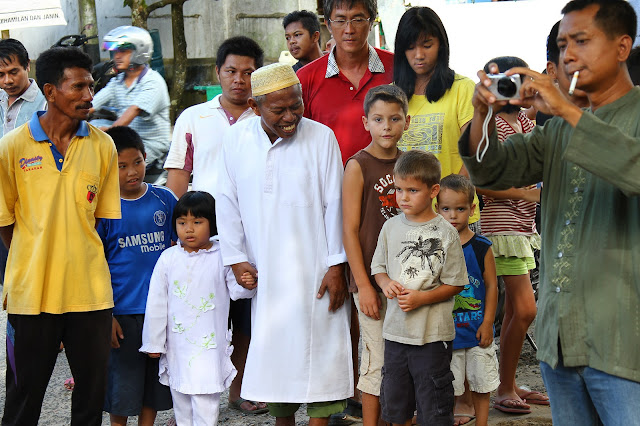 After the first several bulls were sacrificed, I was invited into the Mosque's front courtyard area to hang out with the guys cutting up the meat.  They were having a good ol' time, very excited and laughing and joking. 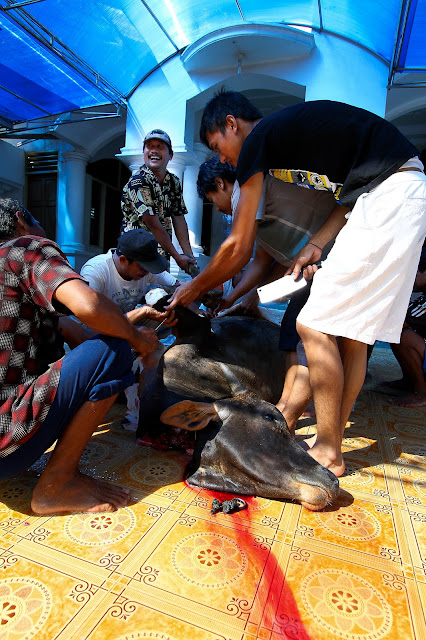 Again, each one of these guys were so very kind and generous.  They appreciated our our interest in learning more about their festival of sacrifice.  They asked for photos, often striking poses (below) in hopes that they'll get a nice, big printed copy for themselves.  And of course, they will!

The meat is always divided up in approximate thirds, with one portion going to immediate family members and relatives, a second going to friends, and the third portion being given to the poor. 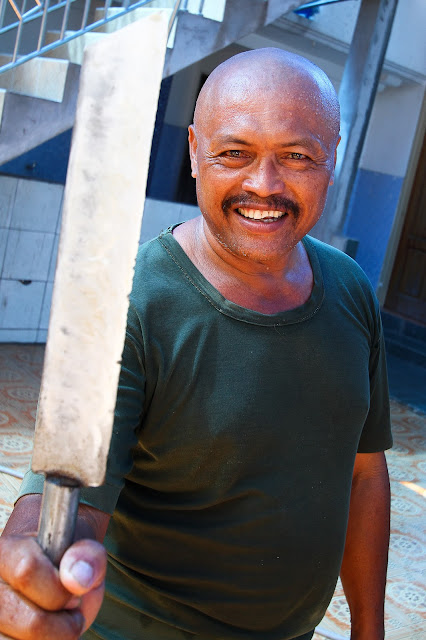 Later that day I was invited to a friends house to eat and fellowship.   Often, Muslims spend much of the rest of the day visiting and being visited by friends, relatives and neighbors, and eating lots of food.  It was a busy and interesting day.  I was thankful for the opportunities I had to see, up close and personal, some of the beliefs and customs related to Idul Adha.  I hope you enjoyed it as well. 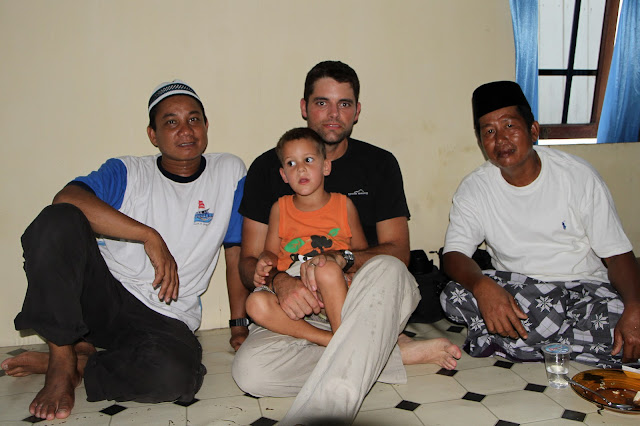 I've observed Idul Adha festivites numerous times now, but this year I had the opportunity to be far more on the "inside" than other years.  Because of some relationships I have with folks, and a few things I've learned culturally, I was invited into places and specifically asked to watch and photograph things that weren't "available" other years.  Watching these sacrifices always has a profound impact on me as it reminds me of aspects of my own faith.  That was especially true this year.

I, and my family, are followers of Isa al Masih (Jesus The Messiah).  As a Christian, seeing these sacrifices reminded me of the weight and burden that was the "Old Covenant."  Imagine the scene in the temples, as priests sacrificed dozens, or hundreds or even thousands of animals to atone for for the sins of the people--over and over and over again.

But praise God!--because of His willingness to offer up His One and only Son, the perfect, unblemished Lamb of God--Jesus--because of His ultimate sacrifice and the blood that He spilt on the cross, I am free!  I had only to accept His sacrifice as the ultimate gift of grace in my life.  I live under the New Covenant, where although I'm still a sinner, my sins are atoned for through the blood of Christ.  By God's grace and through faith in His Son, I live free--redeemed, knowing that I've done nothing to deserve it, and can do nothing to earn it, or keep it.  I love life!

And of course, as a follower of Jesus, one of our own exciting holidays is fast approaching--Christmas!  The commercialization of Christmas is missing here.  There's something odd, but refreshing about that.  The weather is the same year-round.  Our families are back in the U.S.  Yet, Christmas is not about the peripherals.  It's about celebrating the birth of our savior, Jesus Christ.  And you can do that anywhere, anytime, with anyone!  And you can bet that's exactly what we'll be doing!

Idul Fitri and Idul Adha with them, will in turn come to our home to experience and celebrate Christmas with us.  We look forward to this opportunity to deepen our relationships with our friends and neighbors here.
Posted by Dave at 5:17 AM

Wow, different perspective than what we're used to here in the States.

Very interesting! So neat and informative to read a blog post like this and see pic's to go along with it.

Dear Dave Forney,
I read this post and I think you might have understood the concept of sacrifice in Islam wrongly. Muslims don`t sacrifice to atone for there sins. In Islam there is no concept of original sin, He forgave Adam and Eve for their sin. Every human beeing is responsible for their own deeds and will be held to account for them. For Muslims God/Allah is The One God, The Merciful and The Forgiver of Sins and He likes to forgive. I hope I clarified, and God knows better and may He forgive if I said anything wrong, amen. Warm regards and all the best for you and your family.
Maryam

Maryam,
Thanks for taking the time to drop in and read my blog and leave a comment. I'd like to clear something up in reference to that comment. I did not ever mention that Muslims sacrifice animals to atone for sins. You must be referring the the Post Script (PS) section at end of this post, as that is the only place where I mention animals being sacrificed to "atone" for sins. If you read it again, I think you'll see that in that section I'm clearly commenting on my own faith, as a Christian.

In the Old Testament, people would sacrifice animals to atone for their sins. Christians believe that Jesus Christ ultimately gave his life on the cross as the ultimate sacrificial lamb (perfect and unblemished), so that the Old Covenant no longer applies to Christians today. We believe that by simply placing our faith and trust in Christ our sins our forgiven, and with that we receive the promise of eternal life with Christ in Heaven!

However, before that Ultimate sacrifice, it's clear from many, many passages in the Old Testament that people offered many sacrifices to atone for there sins. My comment was referring to how watching sacrifices today gives me a clearer picture of what it must have been like back in the Old Testament for people of my faith that were living under the Old Covenant, offering many sacrifices to atone for their sins. But again, I was clearly not referring to Muslims in the Post Script section.

Thanks again for taking the time to comment. I sure appreciate your interest and help in clarifying this. Blessings,
Dave