Last Saturday we were asked to fly around the Governor of East Kalimantan and his entourage.  Craig flew the Caravan and I flew a 206 (they requested the Kodiak, but it was grounded, waiting for a part from the U.S.) 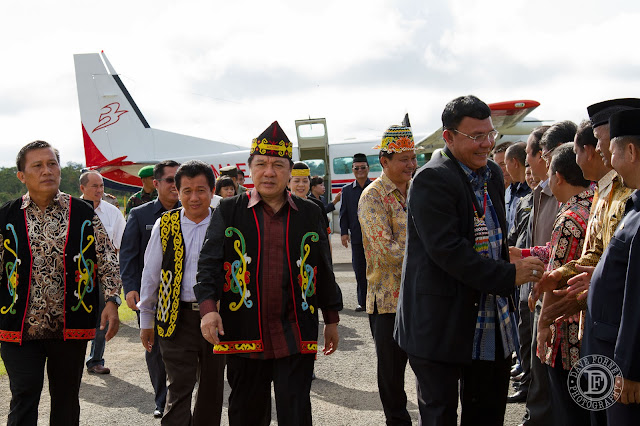 And here (pictured below) is the Governor himself, all smiles after a great flight by Craig. 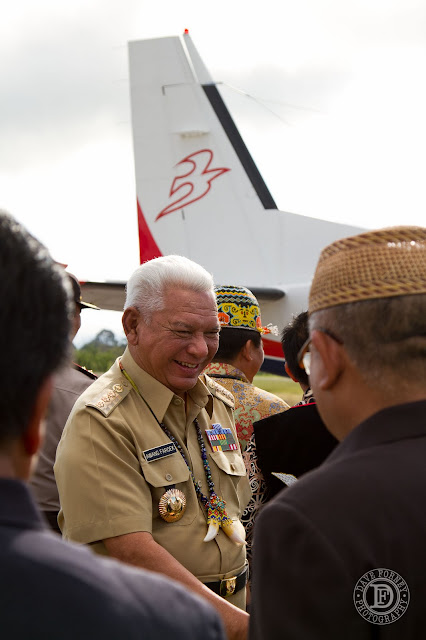 A huge line of people were waiting to greet them when they got off the plane in Malinau. 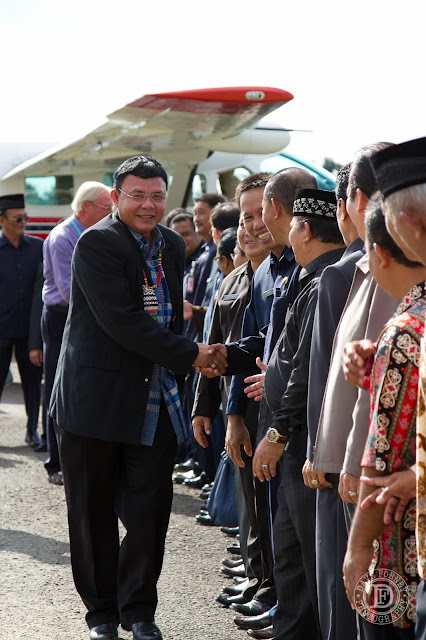 Then, later in the afternoon they had requested the Caravan to take a group of them directly from Malinau to Samarinda.  Because it would be late in the day and it's a long flight, there was no way that Craig could get there and back to Tarakan before dark.  So he was planning to spend the night in Samarinda.  However, as often happens in these situations, there was a communication blunder and in fact they wanted BOTH planes to go to Samarinda.

It's been a long time since we've taken a 206 to Samarinda.  It's a loooong way from Tarakan (or Malinau) and there is no Avgas.  What's more, late in the day the weather can be very wild en route in that area.  And the 206 is a lot slower than the Caravan.  I wished for the Kodiak, but alas, it would have to be a 206 or nothing.  I pushed for my passengers to get there earlier, but again, as is often the case, they were not to be "pushed".  Finally, at 3:15pm I departed Malinau, heading for Samarinda, a 2:15 flight away.  If all went well, I planned to arrive 30 minutes before sunset.

This is not normal for us here.  We typically plan to land at least 45 minutes before sunset, and especially on a long flight like this!  But since there were two of us going and the Caravan was faster and would be out ahead giving me weather reports, I departed--planning to turn around within the hour if the weather was anything but perfect.

Ten minutes after departing Craig overtook me in the Caravan (pictured below as he flies past to my right).  As you can see, the weather was absolutely beautiful.  In fact, I'd say that it's probably only this good about 10 times a year at this time of day.  I climbed up to 11,500 feet and settled in for the ride. 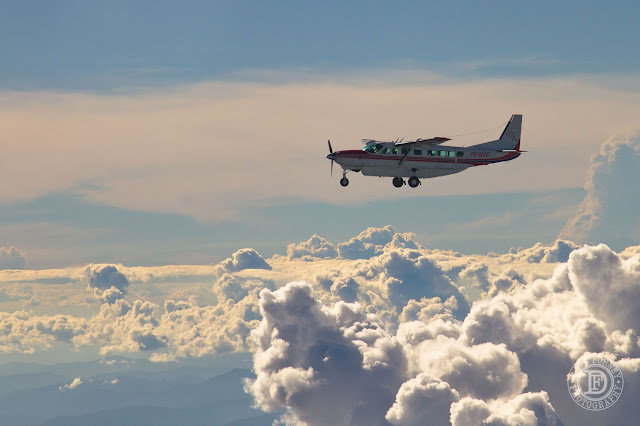 Shortly after leveling off I saw a nice mushroom topped thunderstorm way off in the distance.  It was dead ahead and about 100 miles away.  That was the only "bad" weather on the entire trip, and it was easily avoided and as it stood all alone in a clear sunny sky.  Here's a shot of it out the window as I skirted well clear of it to the west. 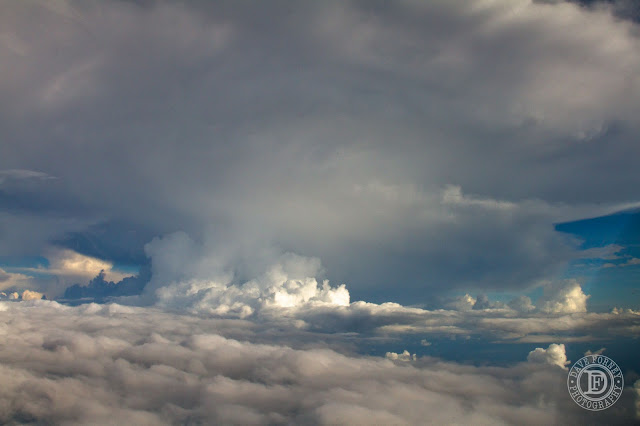 Helped by a nice tail-wind we made good time and landed at about 5:20pm in Samarinda (the airport is called Temindung). 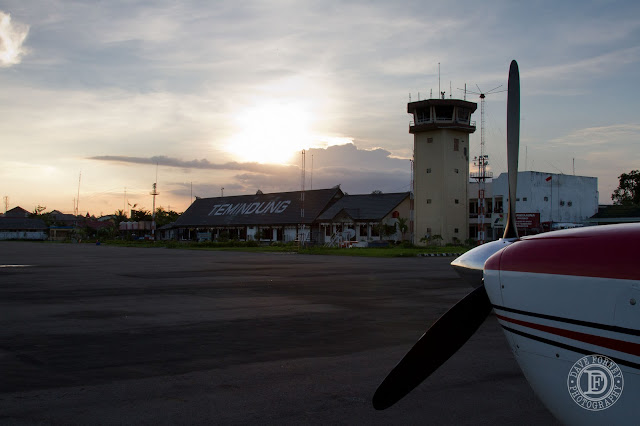 When I landed, there were hundreds of people on both sides of the runway from end to end--not right up next to it, but off to the side.  I thought that was strange, but no one was moving and the tower said the runway was "clear" and that I was "cleared to land".  I was very much on edge, ready to abort on a moments notice if someone ran out into the runway.  But they didn't.

However, by the time I taxied in and shut down, I realized what they were doing.  They were waiting for me to land so that they could overtake the runway.  Normally the airport closes at 5:00 pm. Apparently at 5:01 it gets overtaken by throngs of kids playing soccer and couples going for romantic walks. 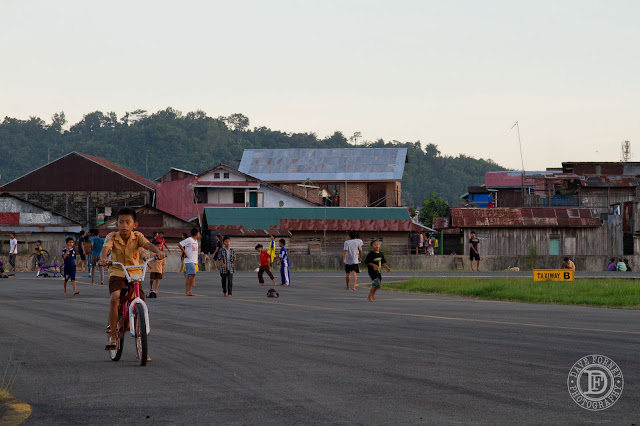 After securing the airplane for the night, I walked out onto the runway to see what all the fuss was about.  It just struck me as both funny and surreal to see a paved, aviation runway, covered in swarms of screaming, laughing, happy kids.  It was so not normal--at least for my western mindset.  So here I stood looking to the west as the sun set down at the end of the runway that I had just landed on 10 minutes before.  The shirts on the ground make a goal at one end of a make-shift soccer field.  There were probably a dozen similar games going on simultaneously from one end of the runway to the other. 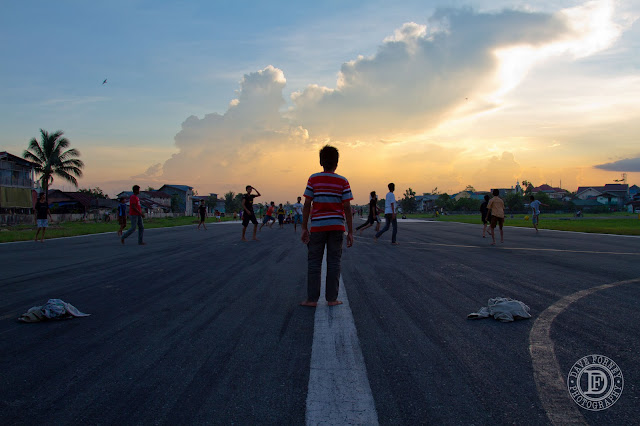 Then I turned around and shot a picture the other way--yes, another goal, this one defined by two pairs of shoes.  I hung out and made a bunch of new friends for the next 20 minutes or so, before finding Craig and making our way to a hotel. 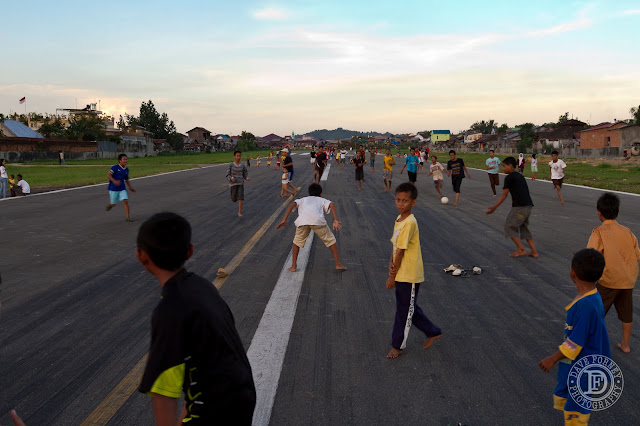 The next day I flew back to Tarakan, and once again the weather was great.  I have some pictures I want to show you from that trip, but that will have to wait till next time.
Posted by Dave at 11:08 AM

hahahaha...it's pretty common in a small airport in borneo.

here at nanga pinoh (kalimantan barat), the airport was overtaken by people of any ages since 4pm. there are no scheduled flight to nanga pinoh, so the masyarakat are allowed to enter the runway anytime they wants. but the airport itself are very well maintained.

i really love to read your blog dave. thanks for sharing your Bush Pilot life. :)

The colors of the govenor's welcome are great; everyone dressed nicely....
The runway pictures are awesome! I love that kids anywhere...everywhere will use what they have for fun.
I've just returned from Israel where I attended the Goodwill Ambassador Academy and have just begun blogging. Wishing i had a camera like yours in the Land but I had to make do with a pocket size due to luggage limitations. Read about it @ http://allaboutroam.blogspot.com
Merry Christmas to all your family. I've been following for a year now.