Happy Thanksgiving!  If you're not from the U.S., then you probably don't celebrate Thanksgiving, at least not at the same time we do.  But of course this is one of the biggest holidays in America, and many family traditions often go along with Thanksgiving, not the least of which is stuffing yourself with good food and hanging out with family and friends!
We certainly have a lot to be thankful for...a loving family, great friends, an awesome ministry and team here in Indonesia, generally good health, and most of all the hope of eternal life with the One to Whom we give thanks for everything--Jesus! 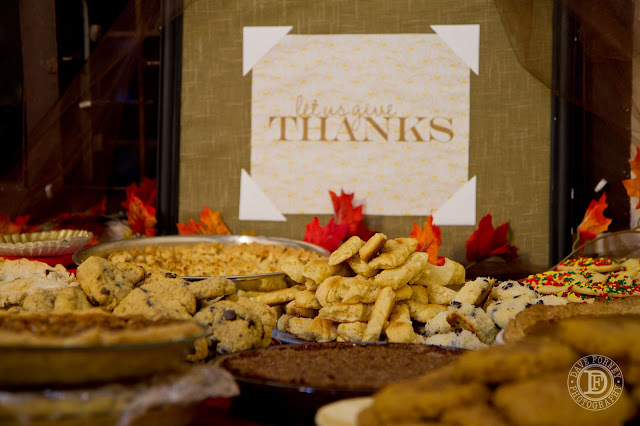 As is the tradition here in Tarakan, our entire MAF team got together to celebrate, including our Dutch and Canadian families!  The wives slaved away in their respective kitchens all day, cooking up a massive feast, on par with anything found on a Thanksgiving table in America, but this one being made entirely from scratch!  I mean, seriously, take a look at the dessert table above!  Unbelievable!
There were smashed potatoes and rolls and corn and green been casseroles and salads and more!  Joy even went so far as to string and cut each individual green been lengthwise, to make her green been casserole look and taste as much like it would in the U.S.  This is one of my favorites, and her's was awesome!
What about the bird you ask?  You see, in the U.S. you virtually HAVE to have a turkey or a ham.  Well a ham is just out of the question in this country--at least in Tarakan, and a Turkey--well, um yeah, those are really hard to get and very expensive too!  One of our families, Chris & Sarah, generously bought a turkey to share with the team, but in addition to that we also roasted eight chickens!  Yeah, you can stuff a chicken and put gravy on it just like a turkey, only it's smaller!  Over here you have to improvise.
By 6:30pm we were finally all crowded together and getting ready to start the feast.  You can see Paul, on the left, whistling loudly to get everyones' attention.  (Notice the beautiful lights and ceiling fan--that's important, as you'll see in a minute.) 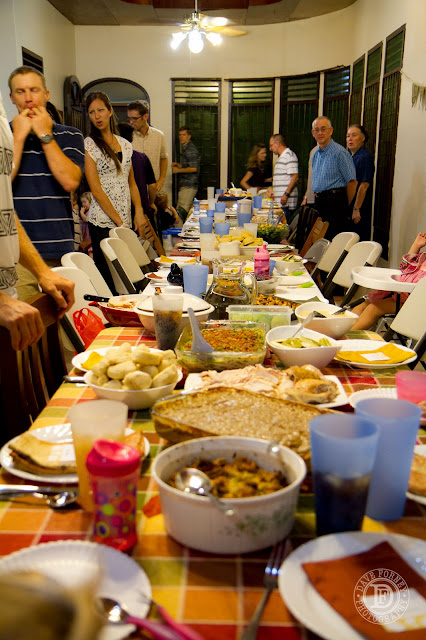 And then, just after we prayed and started dishing up the food, this...

I guess we forgot to be thankful for electricity--which seems to be rather sporadic as of late. 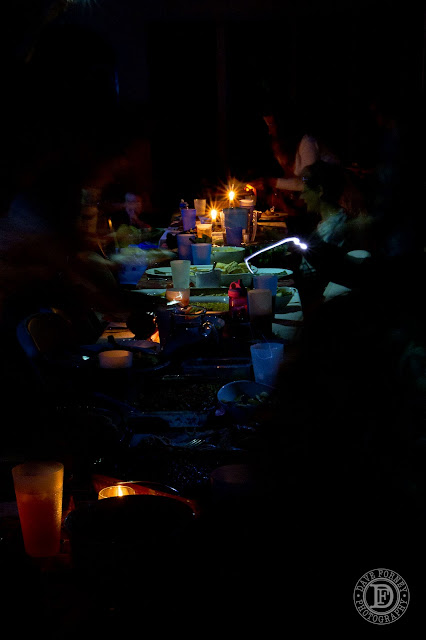 It stayed off the rest of the evening...which gave us the chance to be thankful for candles!  I mean, despite the fact that it was stiflingly hot and humid, with no fans and no breeze, what could be better than eating a thanksgiving meal with dozens of your best friends, lit by candles, cell phones, and LED flashlights?

The below picture almost makes it look like the ambiance is intentional.  Isn't it "romantic"?  Well, this is one of those rare cases where something actually looks better in the photo than it was in real life.  This is a long exposure that I took just after the power went out, just to show you what was going on in the darkness.  Initially, it actually looked a lot more like the picture above, almost totally dark...until we rounded up more candles and flashlights.   (You might notice that the ceiling fan is still moving in this shot, since it was just a minute or so after the power died.) 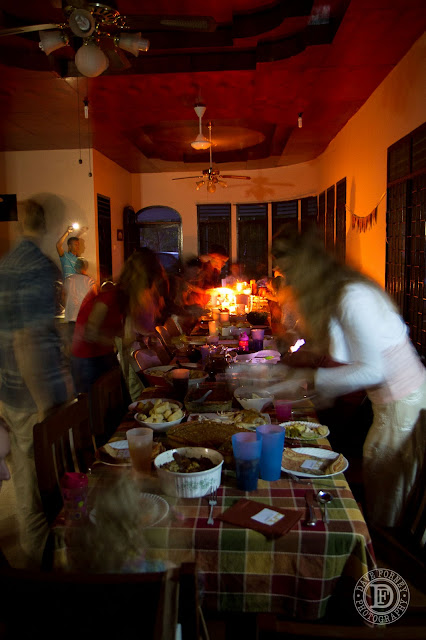 Well, it wasn't what we had in mind for our Thanksgiving dinner, but we still had a great time none-the-less.  And now we won't forget to be thankful for electricity--when we have it--and candles when we don't!

Here's a few ladies from Long Sule that seemed joyful and thankful the other day.  I had just flown in some government employees for a meeting with the village, and I was waiting around for a half hour until they were ready to leave.  These ladies were taking a lunch break, having been working hard in their rice fields on the hills behind the airstrip.  They were all laughter and smiles! 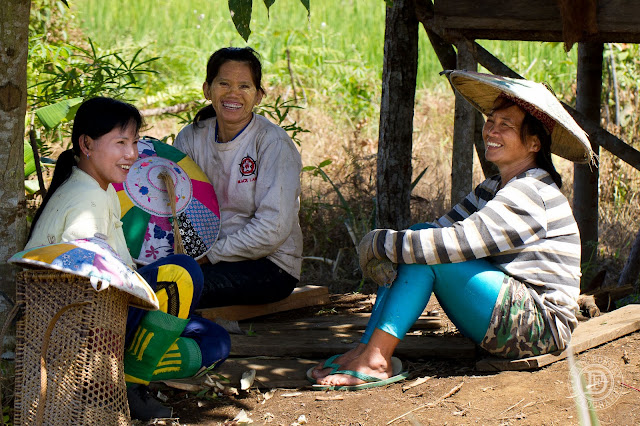 And here's the rice field where they were working.  There's two types of rice here in Kalimantan--wet and dry.  "Dry" is misleading, b/c it's never really dry here, but the dry rice grows on hills like this, whereas the "wet" rice grows in the flooded, flat rice paddies like you've probably seen in pictures from here, or areas like Vietnam or Thailand.  It just depends on the village and the terrain as to what type they grow. 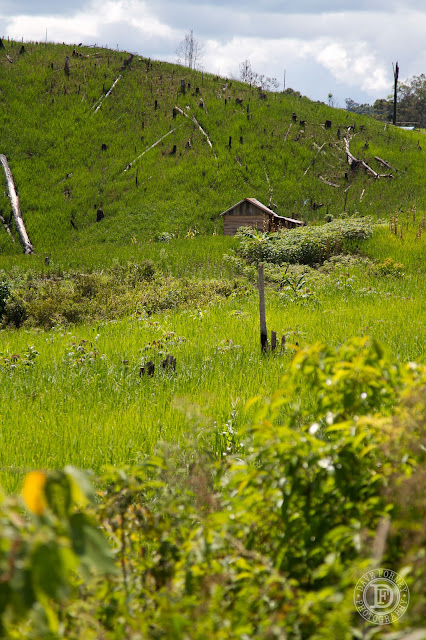 It was a busy week, ending with some flights for the Governor of Kalimantan on Saturday, along with an overnight in Samarinda and return on Sunday.  But I'll save that for next time. 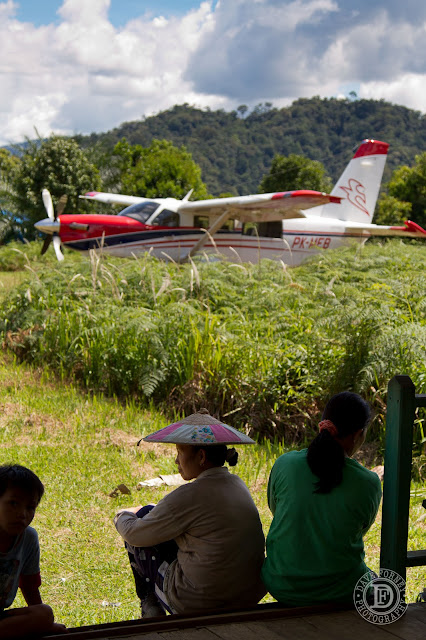 Oh now you're just showing off with your camera-that-shoots-in-the-dark. I'll bring back a D3s and show you!!! :-)

God bless you as you serve away from home. It's nice to see you have a great attitude about it.

I can eat in the dark as well as anyone but no air conditioning or fans? That's sacrifice!

This is the stuff great childhood memories are made of! Some of my favorites include times when things did not go according to plan.

hilarious! we have the same lights-out-kind of fun in Tarapoto! ;)
yay for candles!

we also have dutch friends and rice here (in peru), but not dry rice, I'd never heard of that.

it looks like you had a wonderful time! I'm so glad!

I have a Nikon FM2 which shoots wonderful pictures in the dark. (f you can find film for it). It is for sale for a song and will not make you poor.consimic

Hey...I'm starting to check out people's blogs now that I'm a bit removed from the action. Natalie and I got cracked up thinking about the Thanksgiving chaos up there. All I have to do is close my eyes and I'm transported to that living room. Kids yelling and running all over the place. The heat. The smell of all that food mingled with the smell of burning rubber from the other side of the fence. Sniffle...

Hi..I've not seen your blog in quite awhile but we too relate to your power outages here in the Dom. Rep. It's been so on-going that many have bought inverters for a battery backup. Glad you enjoyed Thanksgiving with others. We admire your family's dedication to the Lord's service! ~~Merry Christmas!