A lot of people came from all over to congregate in Binuang for Irau.  There were people from all of the surrounding villages, from the coastal towns and cities, and people from as far away as Java, Malaysia, and even other countries.  These were all people who had roots in the Krayan region, and many had not been back in a long, long time--a few for over 30 years!  We made a ton of flights to help get everyone into and out of Binuang.  Here, Isaac and Craig are taxiing for takeoff after dropping off another load of folks in the Kodiak. 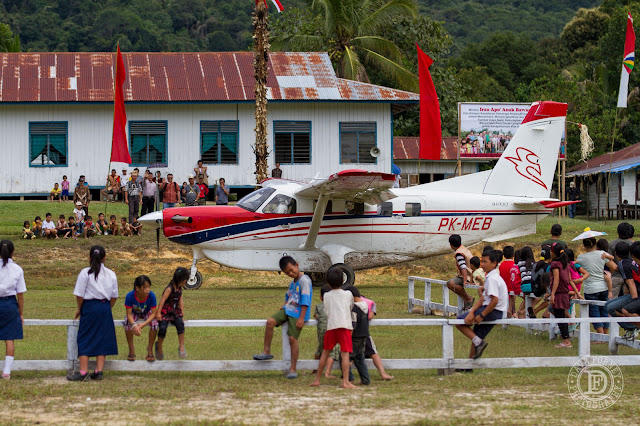 In the above picture, do you see that tall, bumpy pole rising out of the picture in the background, just behind the cockpit?  Well, here's a close-up of it.  It's actually a tree trunk cut like a telephone pole and then covered with hundreds and hundreds of animal sculls of every kind.  I asked what it was for, or what it represented, and was told that it was a symbol of the abundance of food that the people have received from the jungle over the years.  At the top is a windmill of sorts that would spin wildly in the strong afternoon breezes. 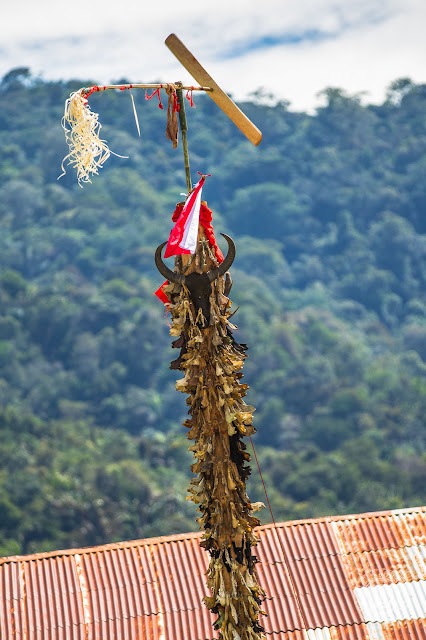 We spent much of our time just hanging out and visiting with people.  Our hosts, Pak Kalfin and his wife, are good friends and were absolutely so gracious and generous--as they always are!  Here, Joy and the kids are hanging out on their front porch, a favorite place for folks to gather, where one has a good view of the whole village and the airstrip. 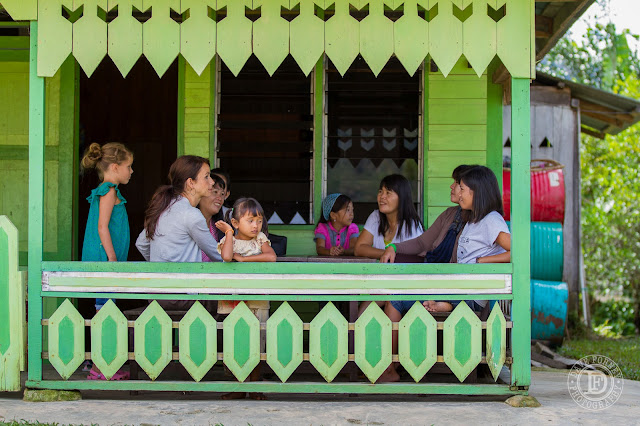 Going for a late afternoon walk...the kids are never without friends in the villages.  Though many kids in the villages speak only limited Indonesian, and no English, language doesn't seem to be a big barrier for them.  School is taught in Indonesian, so they quickly learn to speak Indonesian, though they all retain their local languages/dialects and speak that among friends and family. 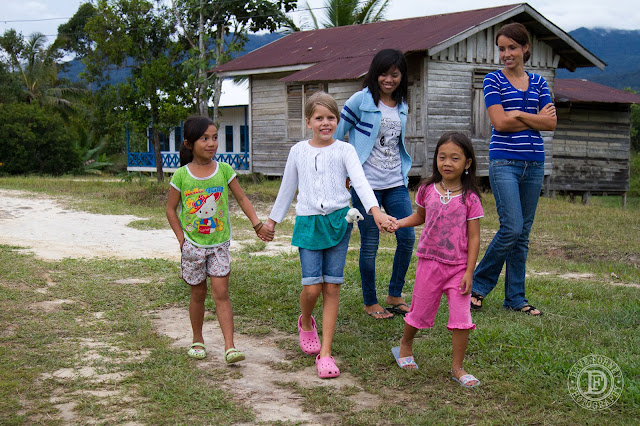 Joy and Tyler jumped in and joined the musical "class" being offered by one of the village's cultural "instructors".  The music was going virtually non-stop day and night.  It was really neat to see so many people all playing different traditional instruments in perfect rhythm and harmony.  When someone would get tired, a new person would take their place and the instructor would teach them how to play their part (if they didn't already know) all while the music continued to play.  In short order they would become a pro--contributing a small but significant part to the song that was made from nothing but a variety of bamboo instruments.  And that's just what happened when Joy gave it a shot.  Her smile says it all. 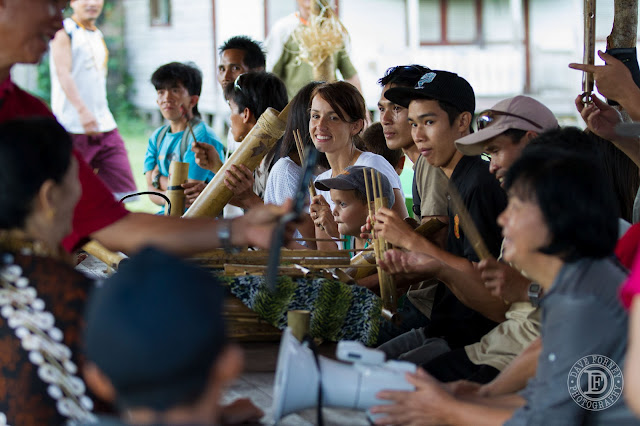 We also worked in some fishing in one of the many little ponds around the village.  The kids love fishing--but whereas normally our hosts fry up the fish we catch, this time we did the "catch and release" plan--seeing as how there were already 15 pigs and 5 water buffalo being prepared to eat I don't think we needed our little fishes. 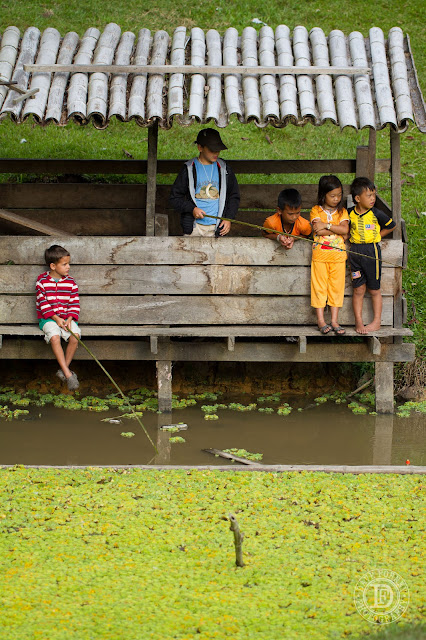 And speaking of food, I mentioned previously the beautiful traditional feast that the women put out one evening.  They asked me to take pictures of all of the food so they would have it documented to remember.  I took a bunch of photos--some more artistic, and some simply from straight above to show each dish.    Later I'll print them out and give them copies. 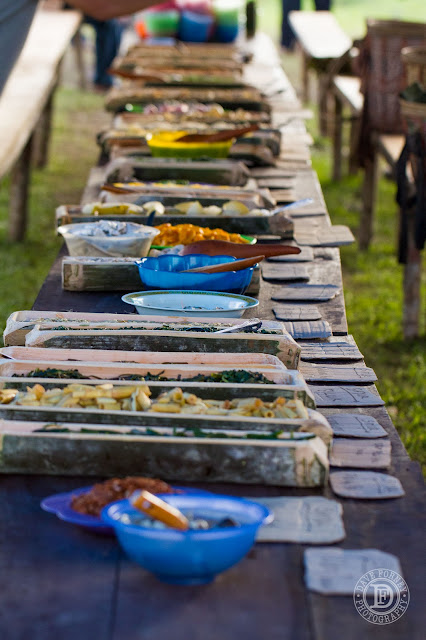 Each food dish had a little description above it with the name and what it was.  Some of them we could identify.  Some, we had no idea.  But we tried all of them before the end of the evening.  These, however, were the ones that were getting all the attention.  There were three wonderful species of grubs, cooked to perfection.  The blue bowl contains the smallest ones, about 1 1/2 inches long.  They pop when you bight into them, but are smooth and "creamy" on the inside.  The taste is mildly bitter and has some other flavors that I'm not sure how to describe.  (I'm always amazed when I read descriptions of coffee or other drinks or foods--the variety of adjectives and descriptions are mind-blowing, and I won't even try to imitate that.  Just use your imagination).    The bowl in the front has the larger, plumper read grubs.  Suffice it to say that the flavors and textures and experience is intensified in proportion to the increase in size.  And then there's the bowl to the right--the one with the big-daddy, jumbo grubs.  I just don't quite know how to describe these--and yes, both Joy and I did try them.  Apparently, according to the locals, these have strong medicinal value.  If that's true, then I should be healthy for a very long time to come! 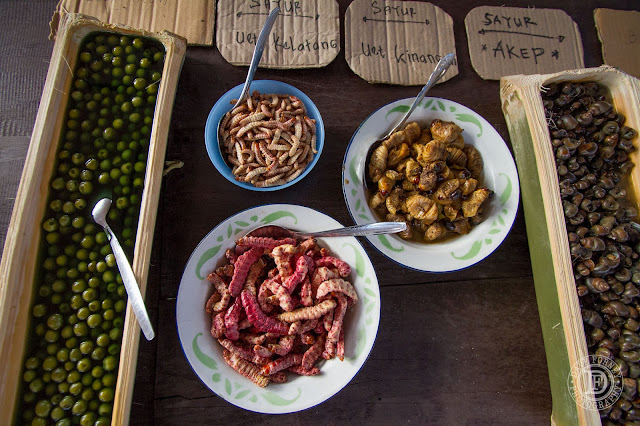 In fact, the entire traditional eating festivities pretty much waited to start until everyone had gathered around to watch the pilot and his family partake of multiple grubs of all the varieties--including the ones that were still ALIVE and uncooked!  And yes, I do have full 1080p video documenting Joy and all the kids chomping down live grubs.  I was really proud of them all.  Here, our friend Pak Donnes is reaching for more grubs to hand to the kids.  The ladies who made the food are dressed up all beautiful in their traditional dress behind the dishes that they made. 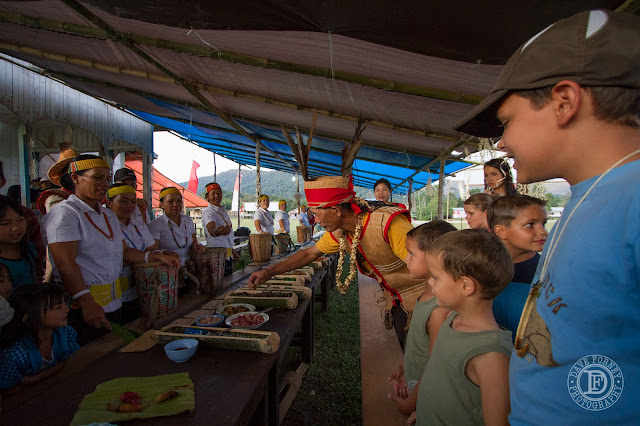 There were many games and activities as well, like a blowgun competition.  Of course, I was given a try and gave a good laugh to everyone as I completely missed the target.  But after a few tries I got a few darts within the target--enough to score a few points. 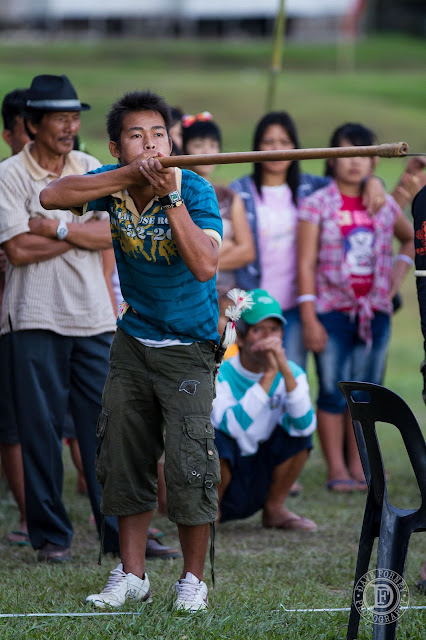 They also played a traditional game where a person (Pak Kalfin in this case) throws a raton ring overhand so it bounces up and down at a high rate of speed as it passes by a line of guys with spears. 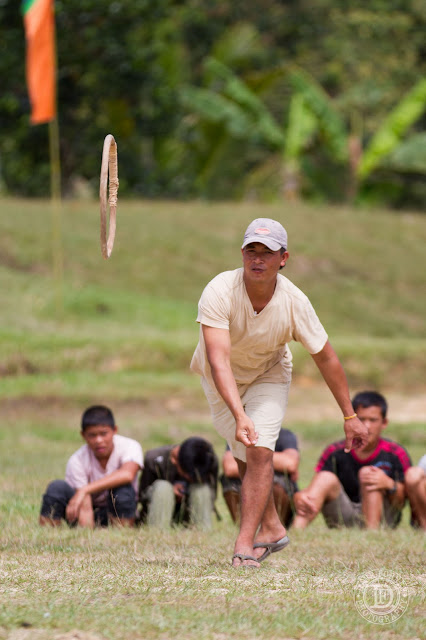 The bouncing ring is supposed to mimic a jungle pig as it runs through the jungle being hunted.  Having seen pigs run like this, I can assure you that it's not to far from reality, though I'm not sure I've ever seen one jump quite that high.  Anyway, the objective is to spear the "pig" to the ground--to "kill" it.  You can see in the shot below that one of the spears is going directly through the "pig" but this shot likely did not result in a "kill", as the hoop probably continued to roll.  About every two or three throws someone managed to "kill" the "pig" and would then score the appropriate points. 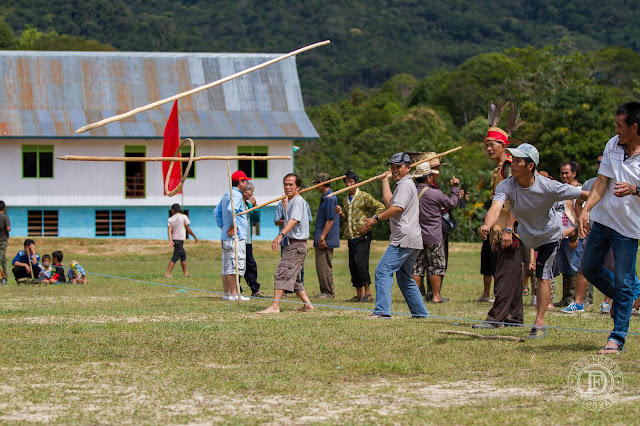 Joy and I both also joined in games of barefoot "bola"--a sort of soccer game played with a very heavy, but smaller ball made of packed leaves, wrapped tightly.  It was a lot of fun!