The island we live on, Tarakan, does not offer any white sand beaches or clear blue water.  Quite the opposite in fact--brackish, brown, muddy water surrounds our island.  But hop on a speed boat and in a few hours you can be in water like this... (I swam down about 20' or so to shoot a picture of Hudson, snorkeling just off the edge of Kakaban island, where the shelf drops hundreds of feet straight down into the clear, dark, black water.) 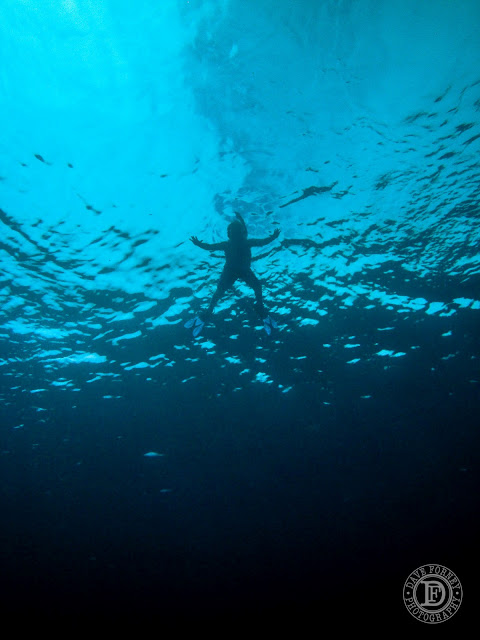 In July my mom came over here for a visit.  We had a great time!  One of the highlights was a trip that she took us on (well, actually we took her on, but she generously paid for) to the islands south of here.  I've featured several blog posts before on these islands, so I hope you're not board with it.  But I never tire of seeing the fascinating, extravagant colors and creatures that are "hidden" just below the surface of these tropical waters.  We all had a great time and made many good memories! 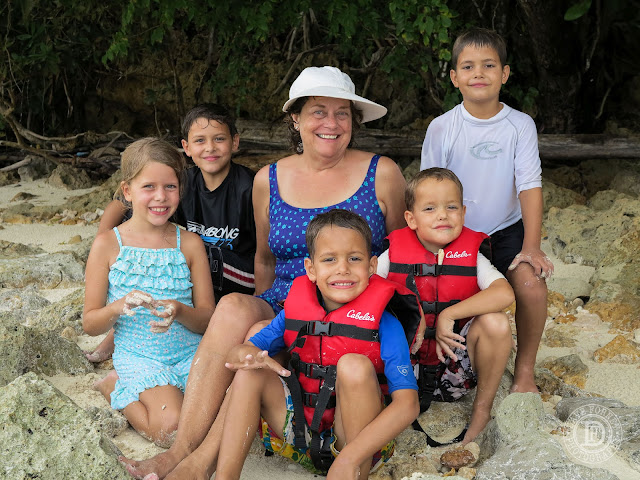 Hudson had his first chance to get up close to a large sea turtle.  There's a lot of them around Derawan. They like to graze on the grass that grows in the white sand.  The larger they are the less skittish.  Often, if you approach slowly, you can go right up and touch them. 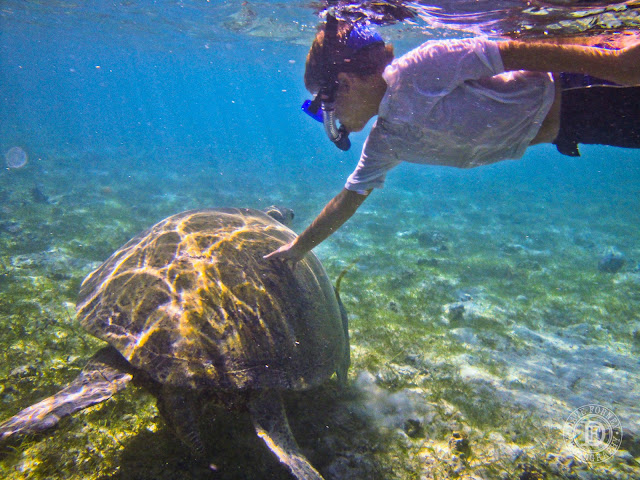 Got quite a few shots of Hudson this time.  He's turned into quite a little fish...reminds me a lot of Britton a few years ago.  The guy just kept going and going and going.  He's like a swimming version of the energizer bunny--that is if bunnies could swim.  Can bunnies swim?  He even went night snorkeling with me and Britton--which is pretty impressive for an eight year old I think. 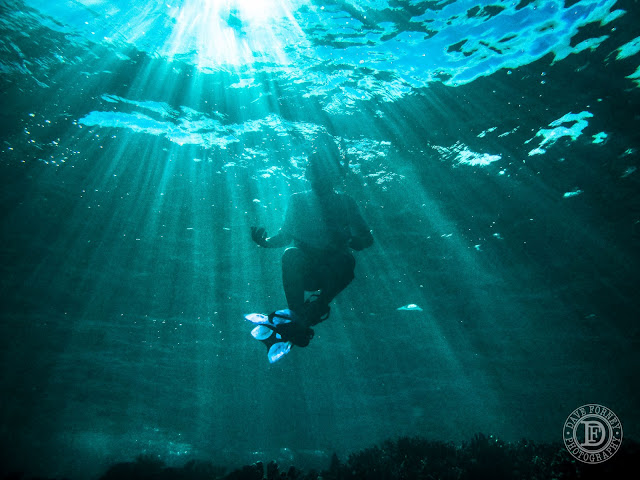 Occasionally a large piece of drift wood or log floats by on the currents.  The kids love to wrangle these in and ride them. 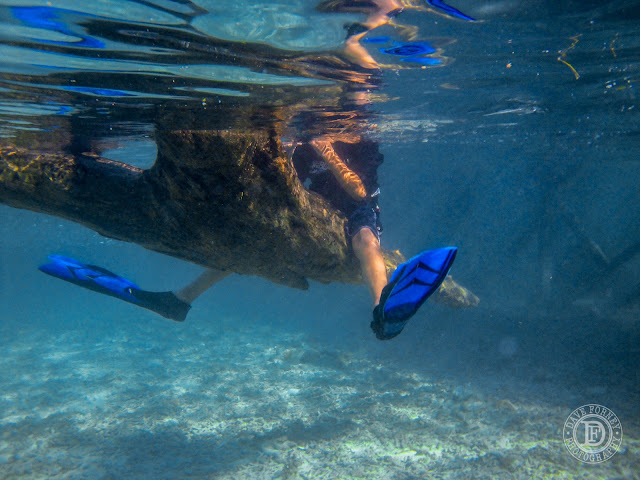 The island of Kakaban is not too far from Derawan, where we were staying.  It's uninhabited and offers a gorgeous, albeit narrow beach, with blindingly white sand and lots of shells and hermit crabs.  In the center of the island is a large lake that's home to hundreds of thousands (if not millions) of jelly fish, all of which have lost their ability to sting.  And encircling the island is a dazzling coral reef that drops straight off into the "abyss" just 20 or so meters off shore.  The kids love to play at Kakaban, and this time we brought a pack lunch and spent the better part of a day there.  Hannah was happy for hours playing in the soft sand surrounding the lava-rocks that make up the island. 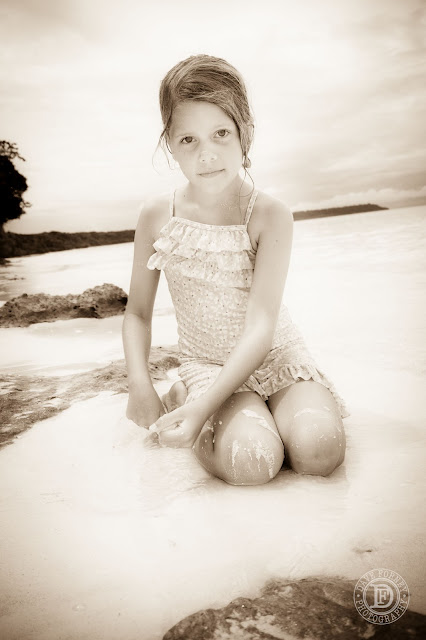 Here's a shot from way down deep in the lake, looking up through the eerie green water at the twins and Britton as they swim among the jelly fish. 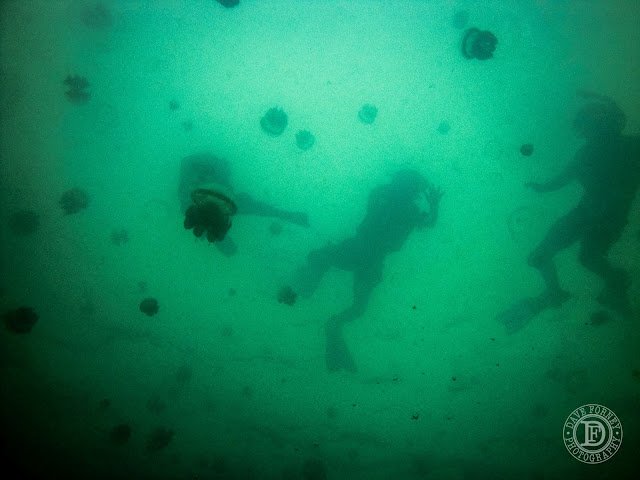 The jellies are harmless here, unlike in the ocean proper.  So you can catch and feel them to your heart's delight.  Tyler couldn't get enough of it! 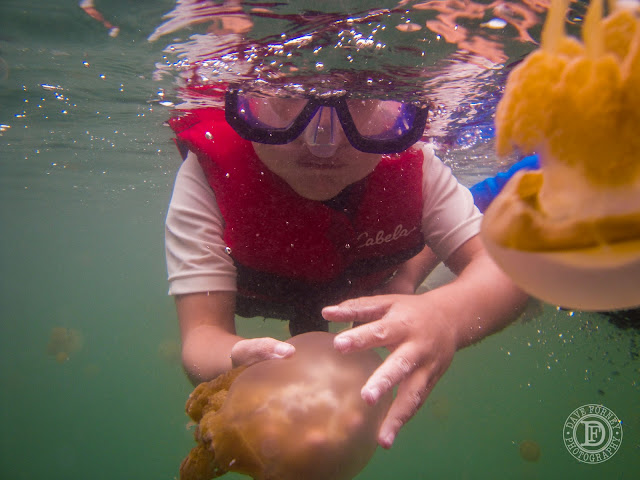 Speaking of Tyler...he sure has a flamboyant personality.  He can really work the pouting face thing.  I don't even think he knows why he does it half the time.  He just likes to "work it".  It doesn't get him anything special in our family--in fact, it should backfire if we're on our parenting toes.  But, I have to say it cracks me up...I just can't show him that or I'll encourage it even more.  The question is, does he get that from his mom or his dad?  Things that make you go hmmmm...? 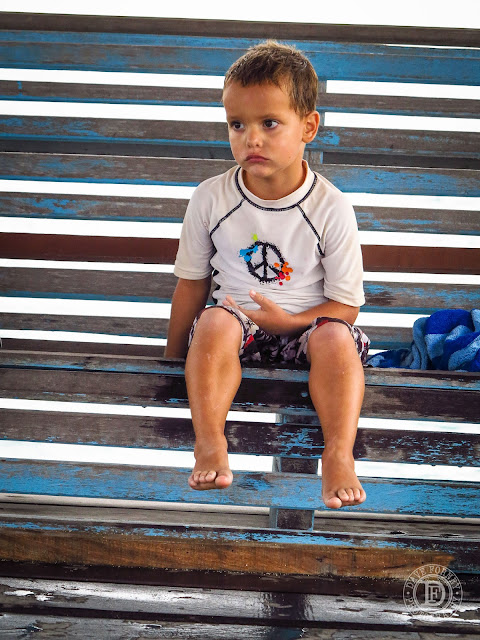 There's a long jetty that goes out to the edge of the reef in Derawan (actually quite a few of them).  This time the boys asked if they could jump off the end of it.  In this picture, it's high tide.  But at low tide the water was quite a bit lower, and the jump was probably at least a good 10 to 12 feet.  They had a blast doing this for hours.  Even Joy, Hannah and the twins jumped off! 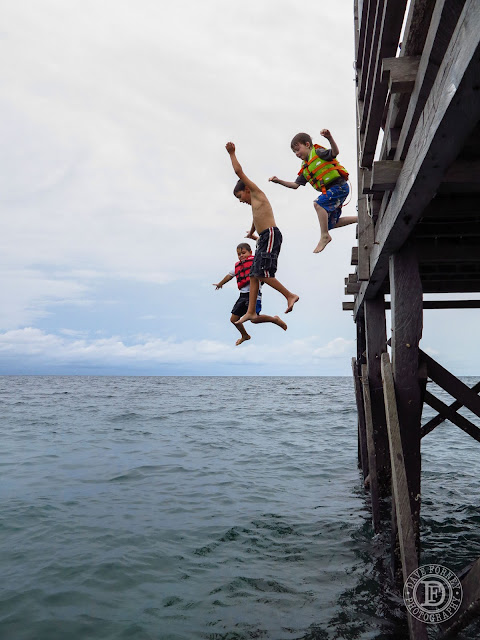 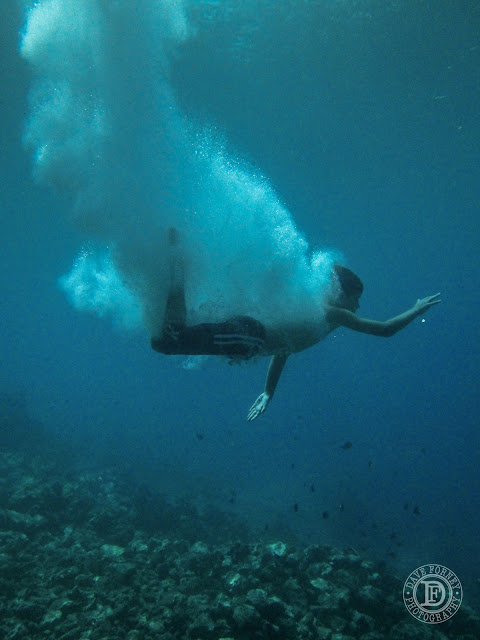 As usual, we saw a lot of gorgeous fish and critters!  Here, Britton gets up close and personal to a poisonous Lion Fish.  If the brilliant zebra stripes and crazy, eccentric spiny fins aren't a clear enough sign to "stay away!", then the final clue is the fact that a fish this size should be afraid of you...but he's not!  And that is always a good sign that you should be afraid of him!  But if you don't mess with them, they typically won't mess with you. 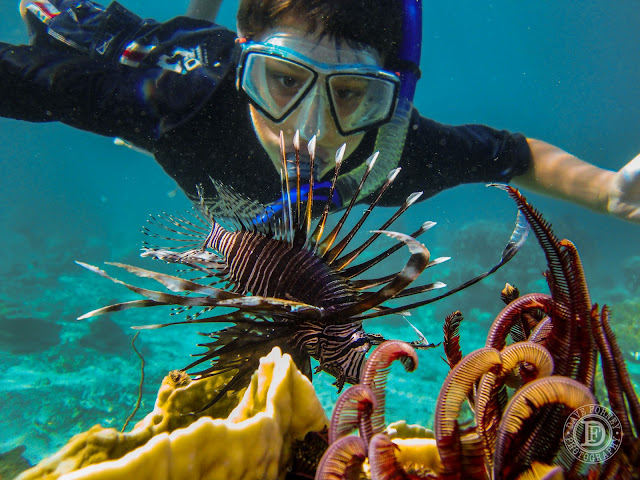 Stop by soon for the other half to this blog post where I'll show you more of the creatures that we saw under the water.
Posted by Dave at 10:34 AM

These are beautiful photos! We live in the Northern Territory of Australia, and our waters are filled with jellyfish (ones you don not touch!) and crocodiles (you also would not want to touch these). I'm slightly jealous of your waters. :)

Our kiddos thought these photos were incredible...the one with the turtle especially.