As I mentioned in the last post, after a week of ministering to local pastors in Karamoja, we then drove up to the remote and beautiful Kidepo National Park in the far northeastern corner of Uganda, for a weekend of camping.  Though some of the other parks in Uganda probably have higher concentrations of wildlife, none offer the same diversity of fauna, or simple, serene, beauty as Kidepo.  Perhaps because it's the most remote of Uganda's National Parks, Kidepo sees far fewer visitors than the other big parks, and definitely has a more "wild" feel, in my opinion.  You really sense that this is what East Africa used to look like back in Livingston's era. 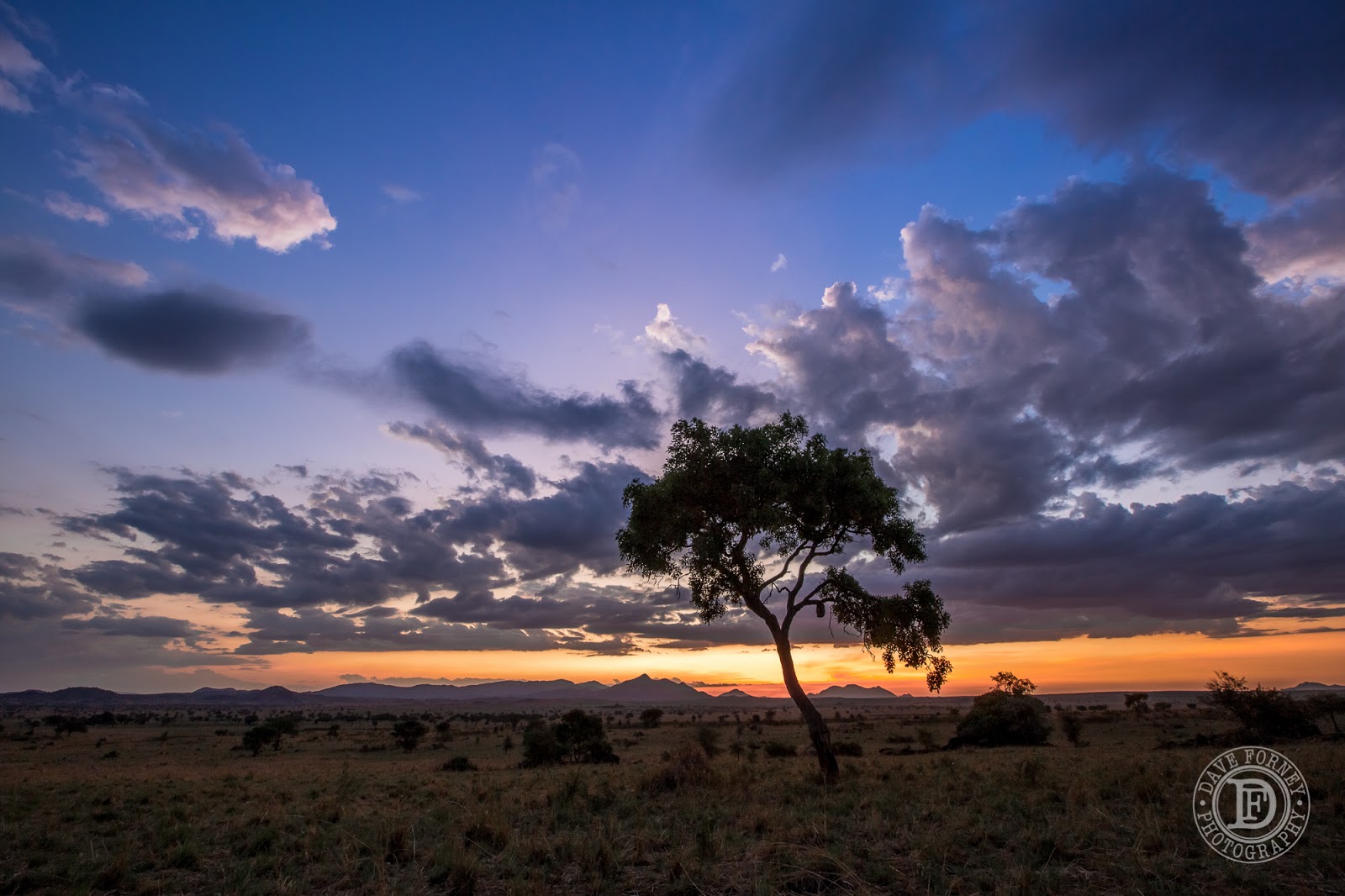 Although this park is very remote, there is actually a small, gorgeous five-star resort there, which offers unparalleled pampering in one of the most beautiful spots in probably all of East Africa.  It's also insanely expensive, and therefore I will never be able to spend a night there.  But I've seen it from the air, and I've seen pictures online and talked with people who've stayed there--they say it's phenomenal.  If you ever visit, and have an unrestricted budget, that's the place to stay.  For most of us, as an alternative, the UWA (Uganda Wildlife Authority) offers a very affordable option with some simple concrete bandas nearby--they are very basic, but also very cheap.  However, we opted for the most basic and cheapest option of all--to camp in our own tents, at one of the gorgeous campsites on a hill, which offered nearly unobstructed views in all directions.  The camping may have been cheap, but the views were priceless!

We arrived just before dark on a Friday night, and set up our camp by flashlight, firelight, and moonlight.  In my previous post, the last picture I shared was a shot of our camp under the light of the moon.  That first night was gloriously clear, but the moonlight was blocking out a lot of the stars.  So I checked what time the moon would set, and then got up about an hour later to gaze at the stars.  I love star gazing! 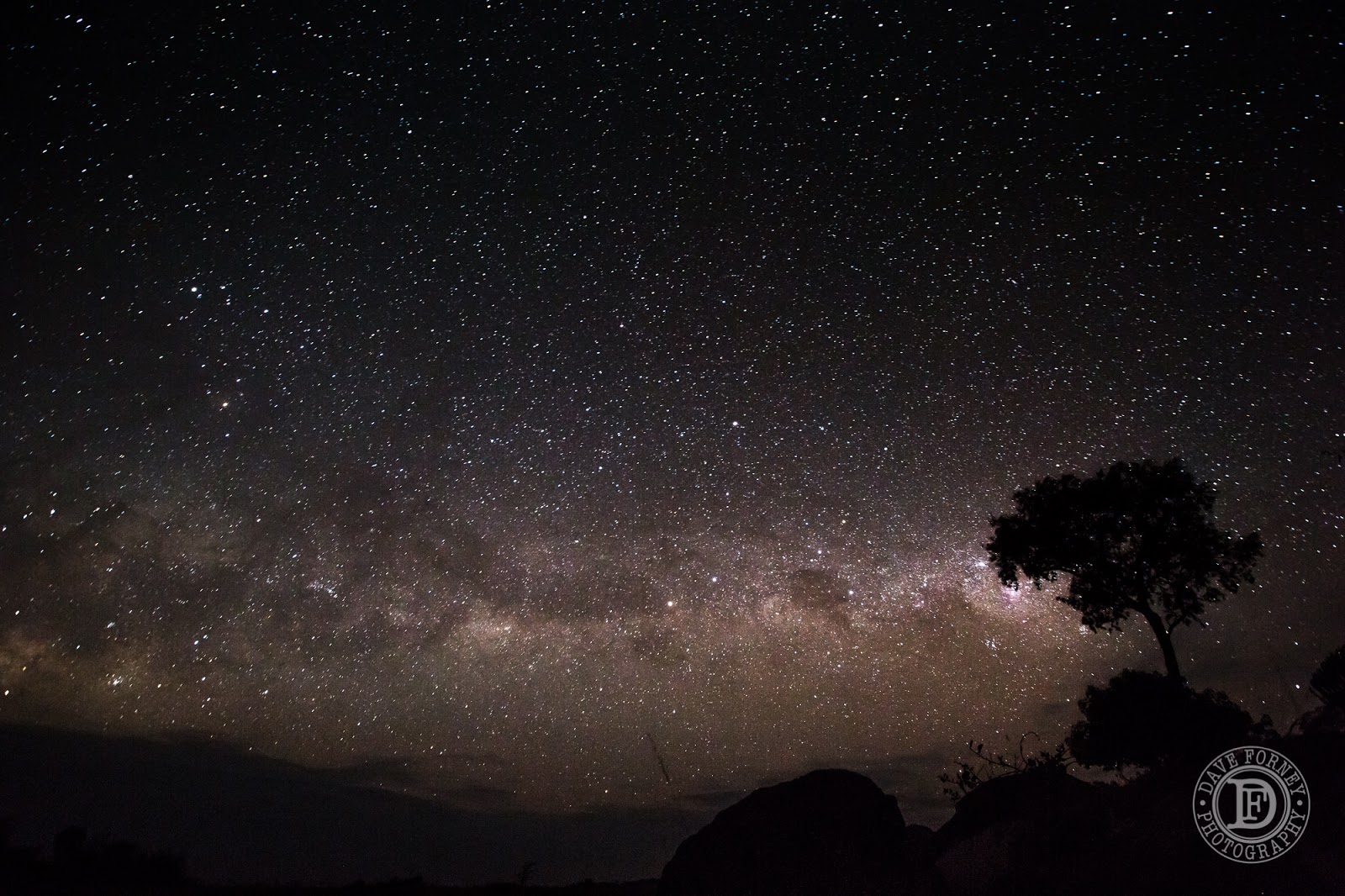 Since we were camping in the open African savannah, complete with all sorts of wild animals including lions, and since there are often lions sighted on or near the big rocks right beside where we were camping, it was required that we have an armed UWA Ranger with us at all times.  He carries an AK-47 and is supposed to make sure that we enjoy our surroundings, without being "enjoyed" by our surroundings.  When I got up at 1:00am, he was snoring loudly.  Haha.  I thought about borrowing the AK, but decided to take my chances with just the camera and flashlights.

The stars were so bright I could easily see to walk without a flashlight. But out in the surrounding darkness, I could hear strange animal sounds.  Out of curiosity, I turned on my bright spotlight and scanned my surroundings.  It was eerie to see so many eyes out there, several pair of which were obviously staring intently at me!  Anyway, with that creepy feeling that I was being watched, and taking occasional peeks with the bright light to make sure they weren't closing the distance, whatever they were, I spent an hour or more enjoying the beauty of the night heavens.

This shot below was taken about 35 mins after the shot above. The tree on the right side in the shot above, is the same tree that appears on the left side of the shot below.  I should have tried to do a panorama, but with the wide lens I was using, the foreground gets distorted (you can see how the tree appears to be leaning--it was only a few feet in front of me and was subject to the distortion of the wide lens) and makes it a lot more difficult to do a proper panorama.  Plus, I was worried about those eyes. 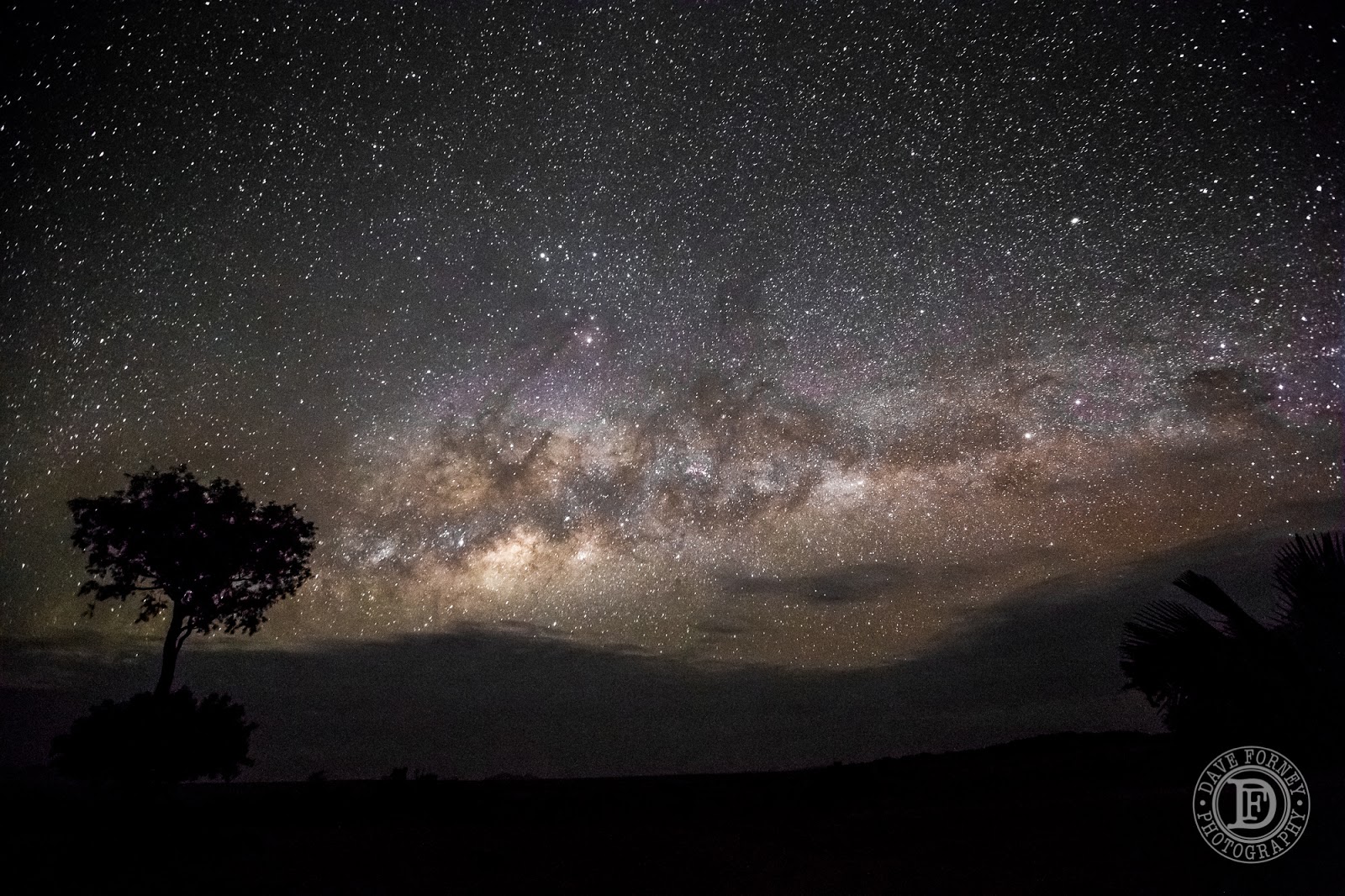 Anyway, I figured I'd get another chance the following evening for a panorama.  That was not to happen, as the long, grueling dry season was about to come to a dramatic end within a few hours of sunrise the following morning.  With the waves of massive, soaking, rain, and pounding storms that prevailed throughout the remainder of our time in Kidepo, came a once-in-a-lifetime chance to witness an epic shift in seasons, and with it, the onslaught of insects and animals that rely on these life-giving rains for their survival.  (I'll have some pictures showing what I'm talking about in the next post.)

But before the storms, we got this--the warm, bright rays of the rising East African sun accentuating the crackling, dry, golden, Savannah grasses, while overhead, the deep, azure skies to the north began to fill with a few clouds, the first signs of the impending rains to come.  I took this photo, below, while sitting up on top of the land cruiser. In the shadow you can see Britt sitting beside me.  It was a great view from up there. 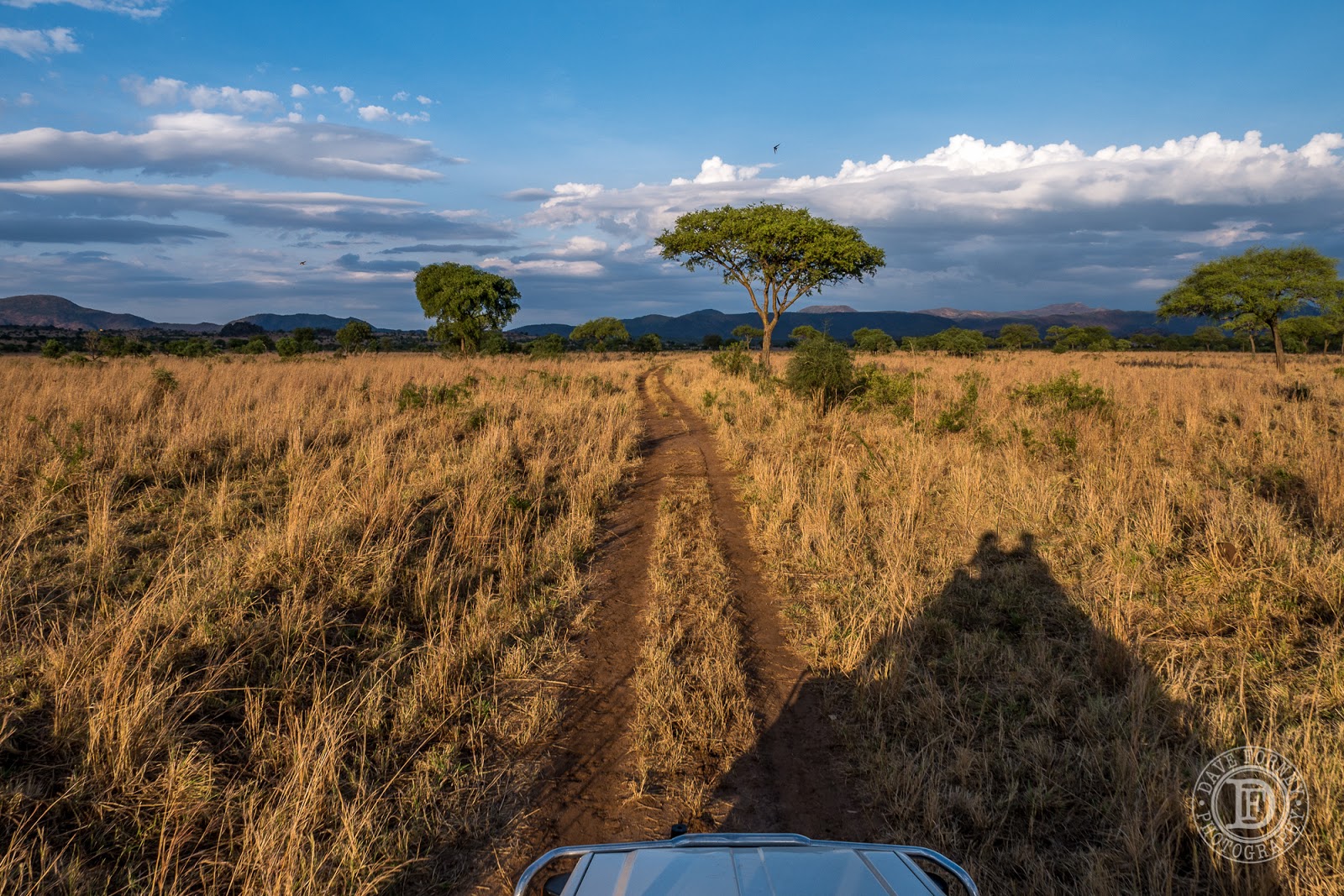 Within hours the sky had changed dramatically.  Storm clouds began moving in, the winds were picking up, and the sun fought hard to force its light through the darkening sky.  It was a photographers dream--those skies--rays of light and shadows dancing over the dramatic landscape. 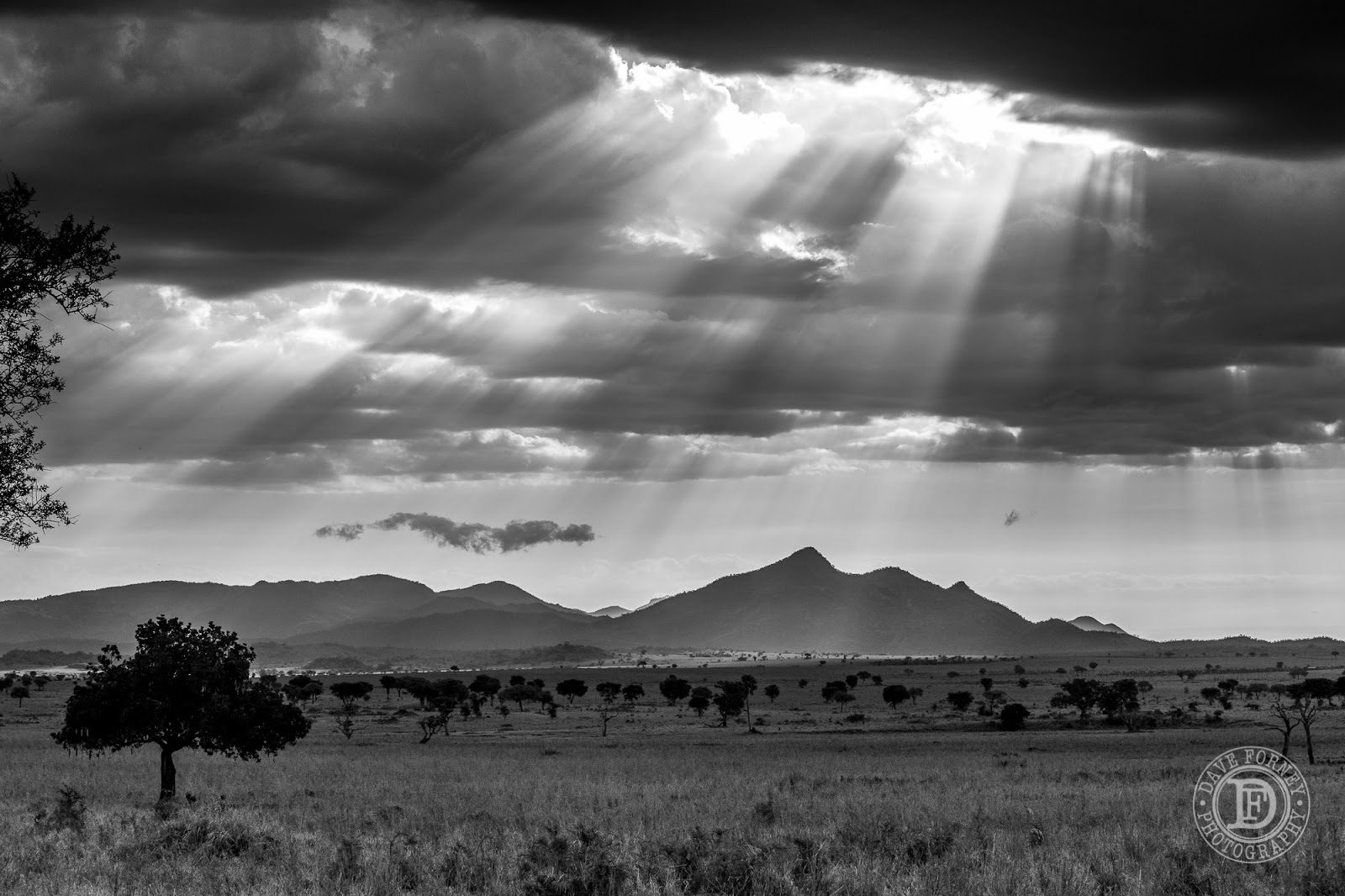 And then the storms hit!  We had wave after wave of storms during the rest of the weekend--thunder, lighting, pounding rain--then the skies would clear again.  Thirty mins later it would start all over.     It might not have been the best time to be in a tent, but we smooshed our tents inside the little gazebo-style shade shelter they had at the campsite, and managed just fine.  The drama of the changing seasons more than made up for any sort of damp discomfort we might have felt. 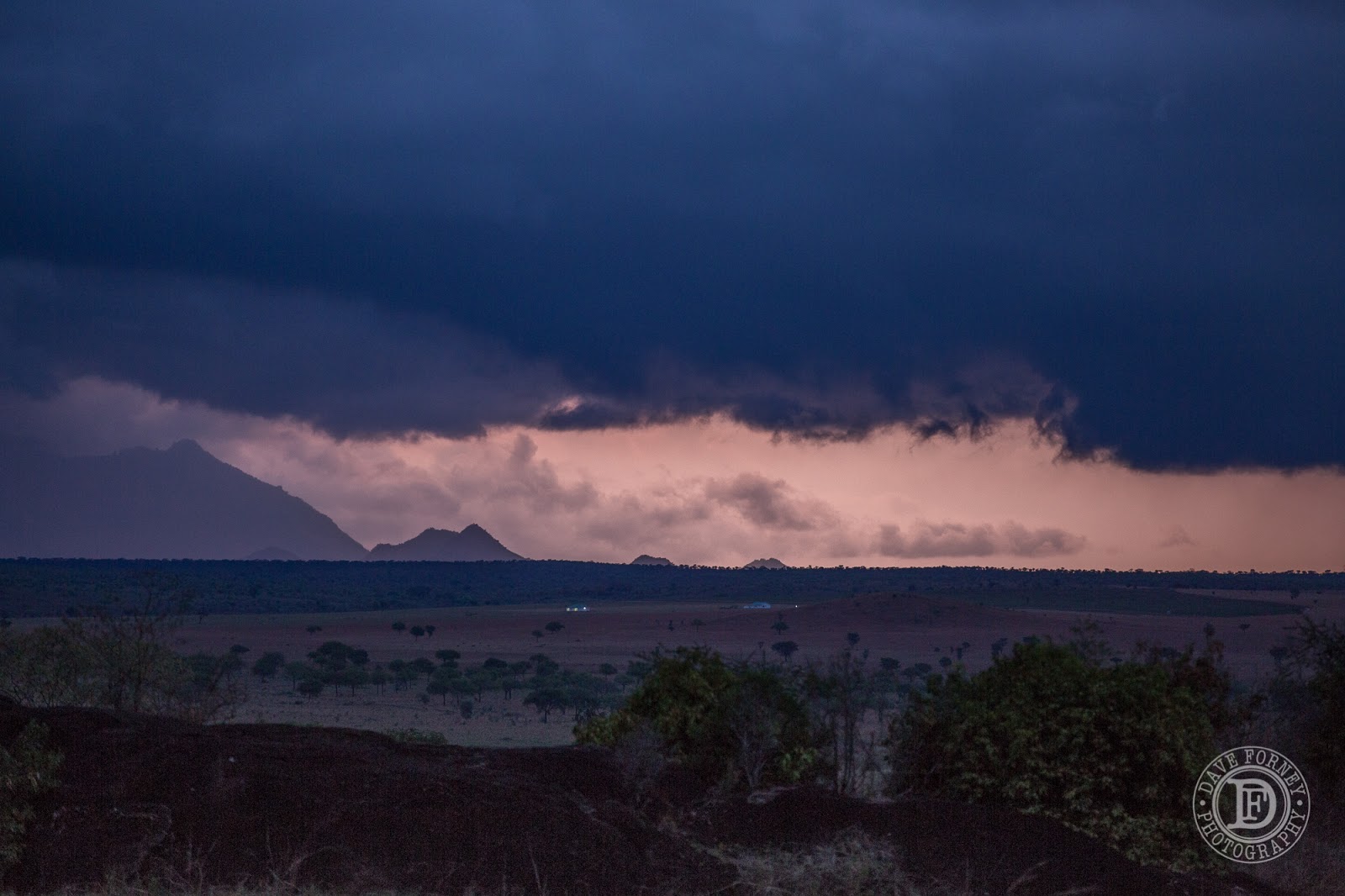 Despite the storms, we had nice, brief sunrises, both Sunday and Monday mornings.  They didn't last long before the clouds once again rolled in, bringing with them the rains, but we didn't mind.  In some ways it seemed like this was the African Savannah version of snorkeling the brilliant Indonesian waters of our previous home, where we could simply drift with the current and watch the scene constantly changing beneath us...the next day, repeating the event over the same reef, with completely new and equally beautiful scenes.  That's what this was like, except on land--albeit we were still wet. :-) 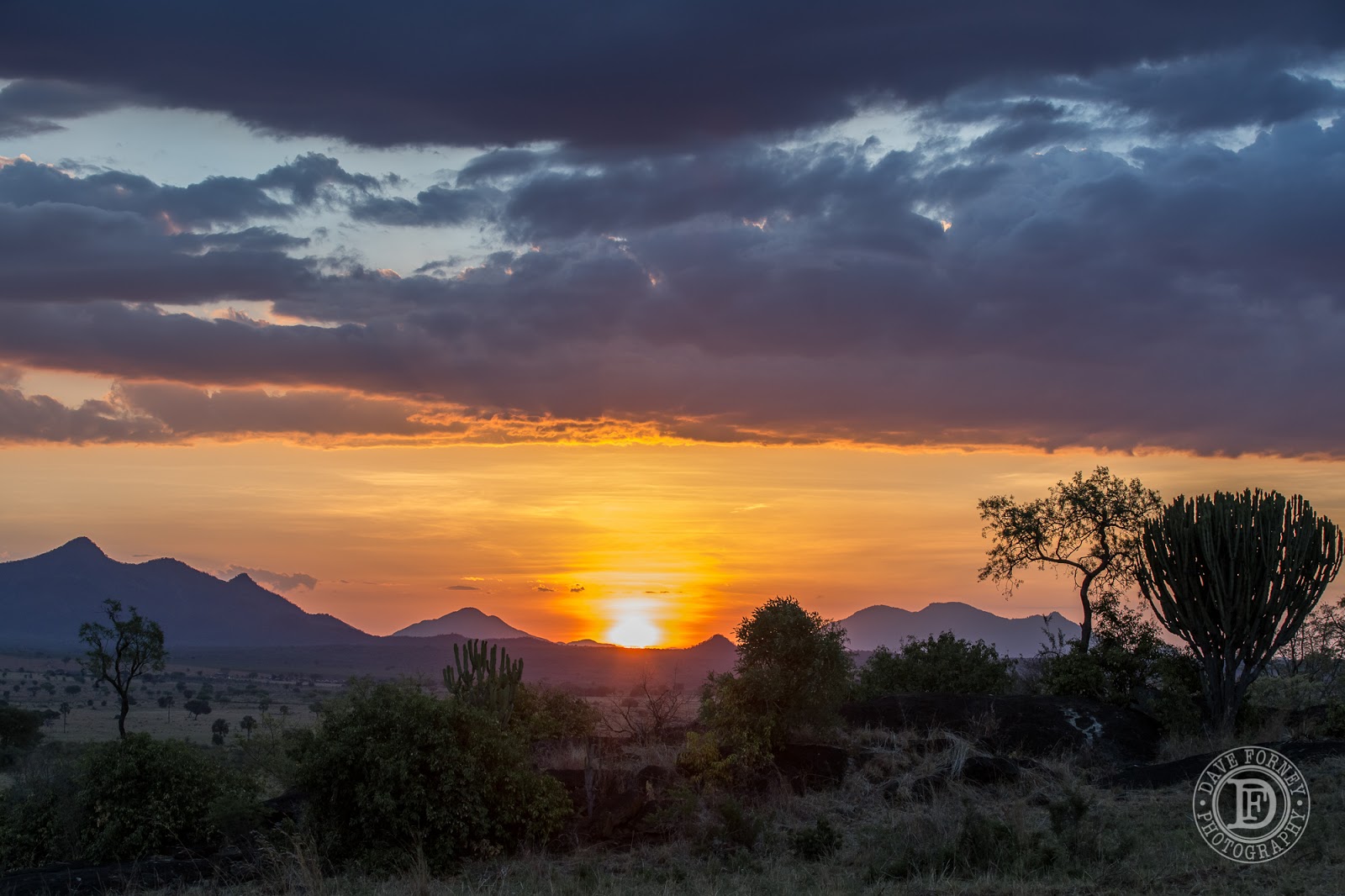 Here's a few more shots of the landscape and skies that we enjoyed. 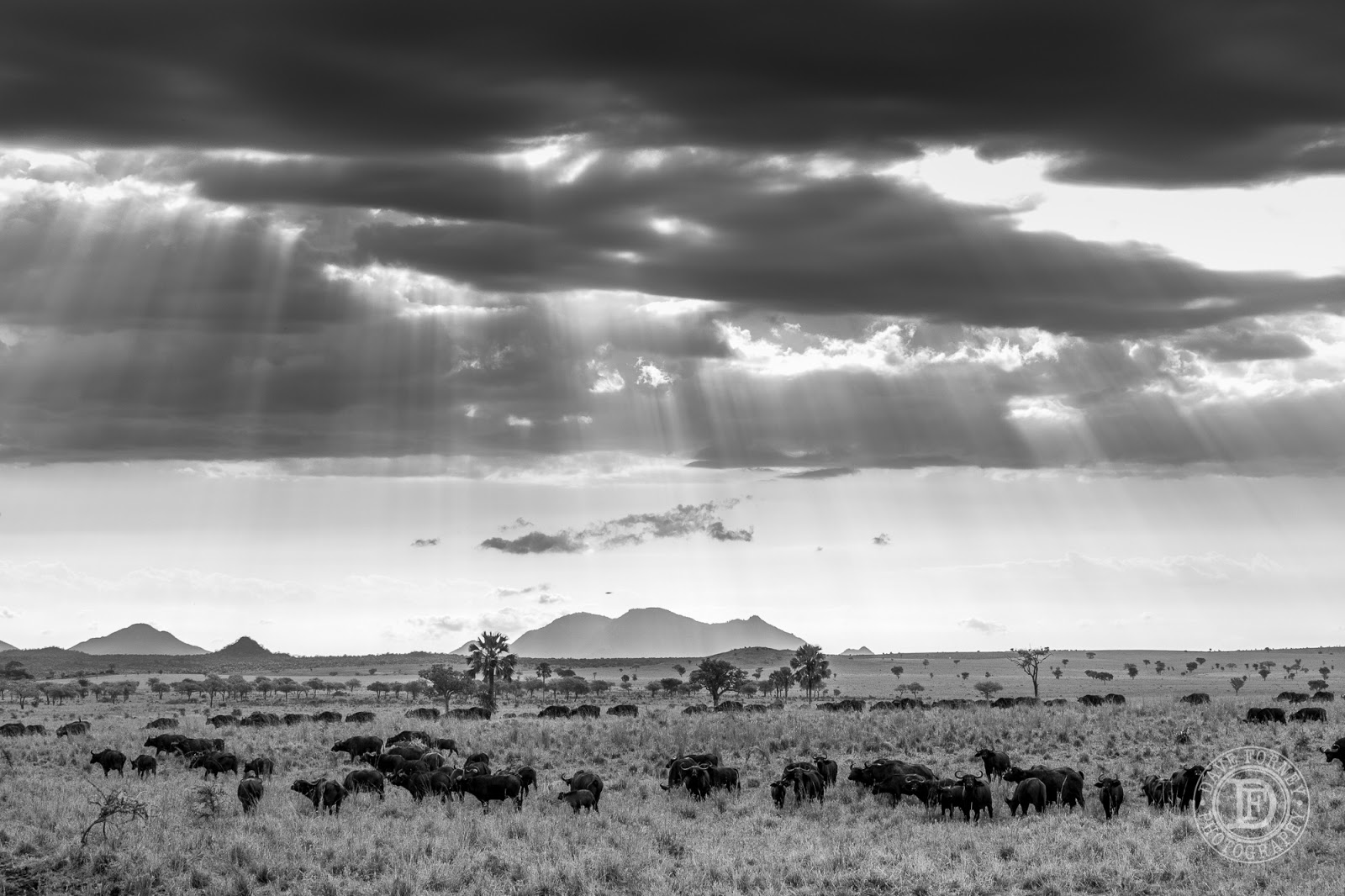 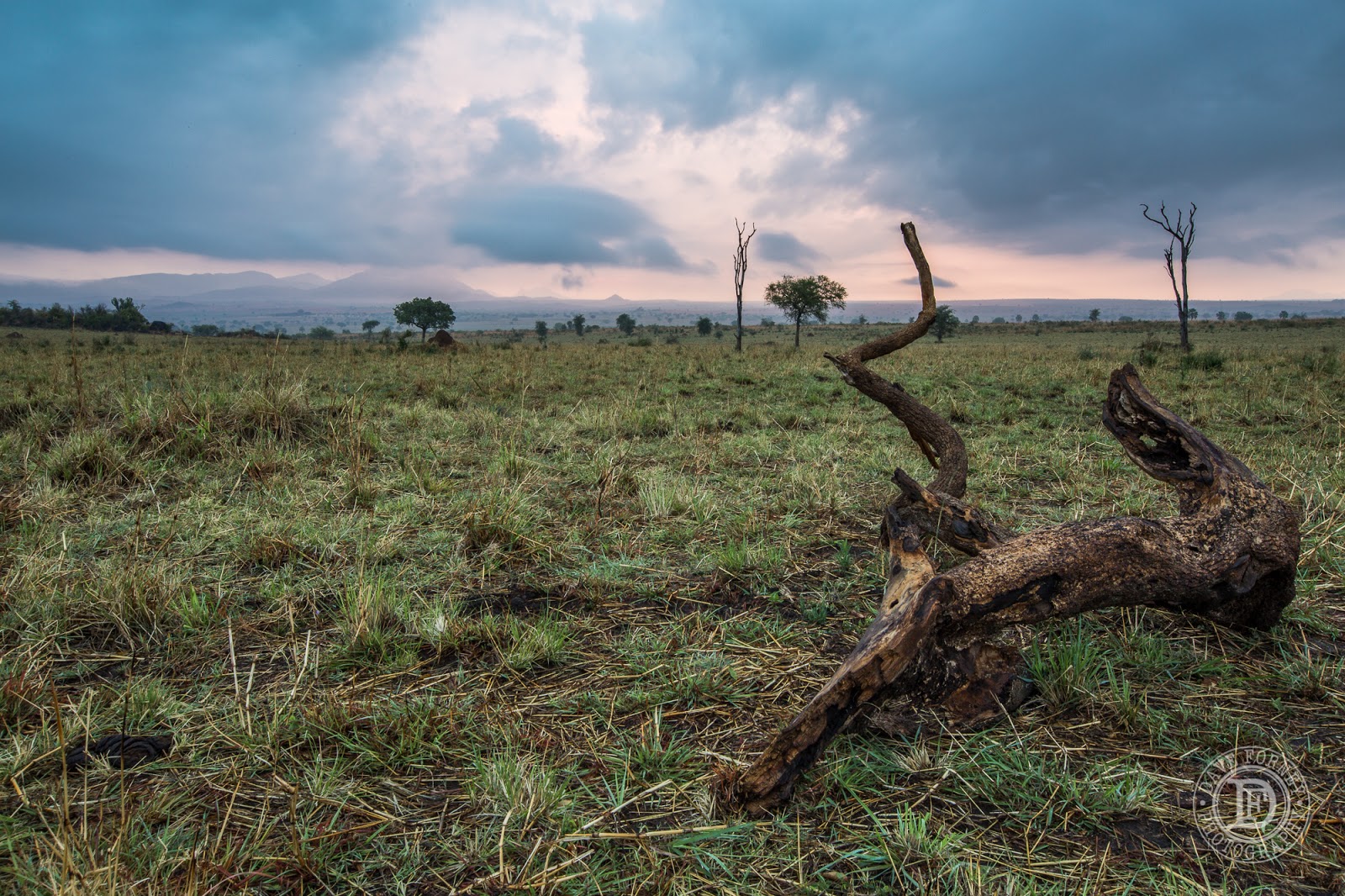 Do you see the zebras, hiding in the grasses near the tree at lower center? 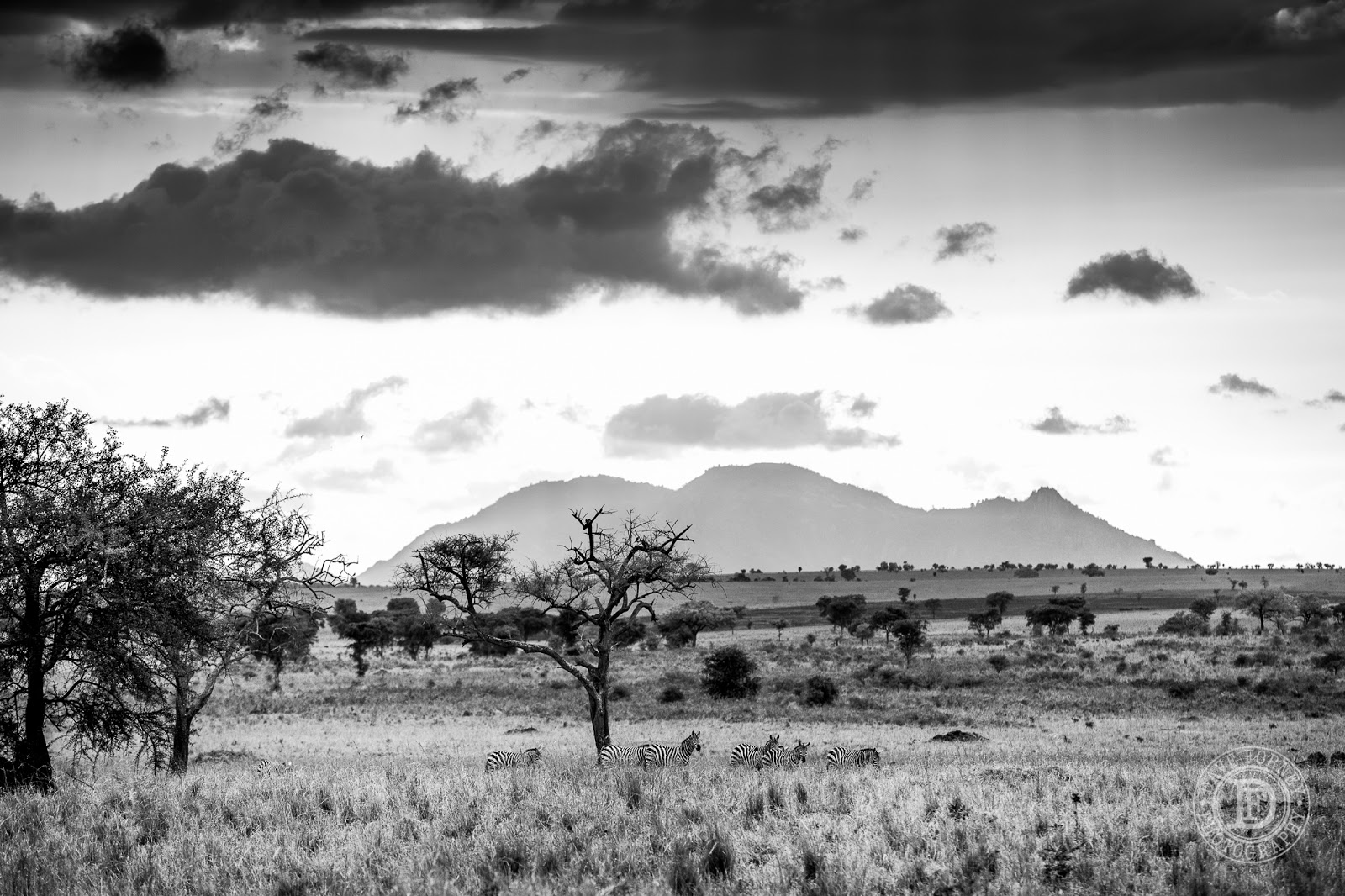 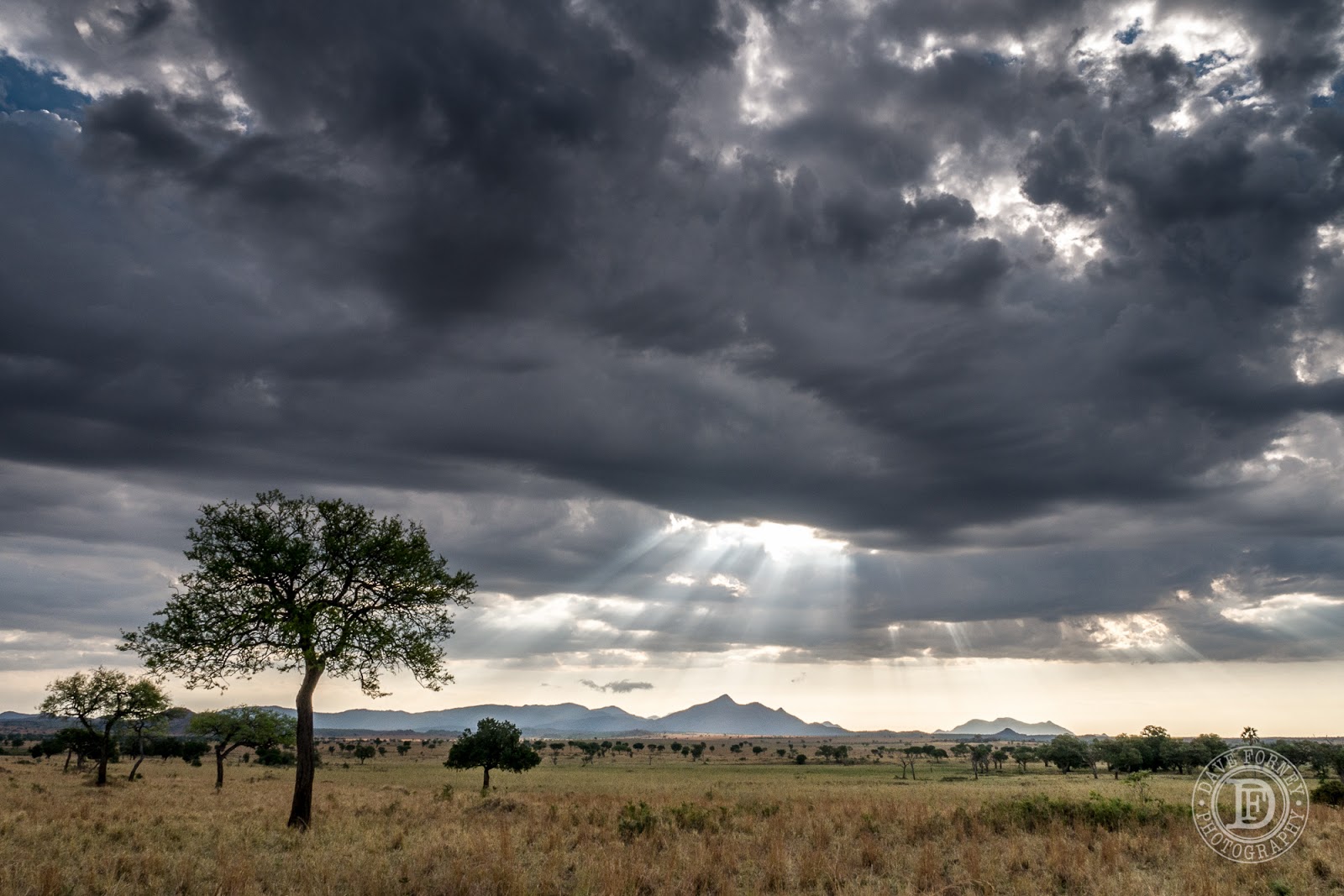 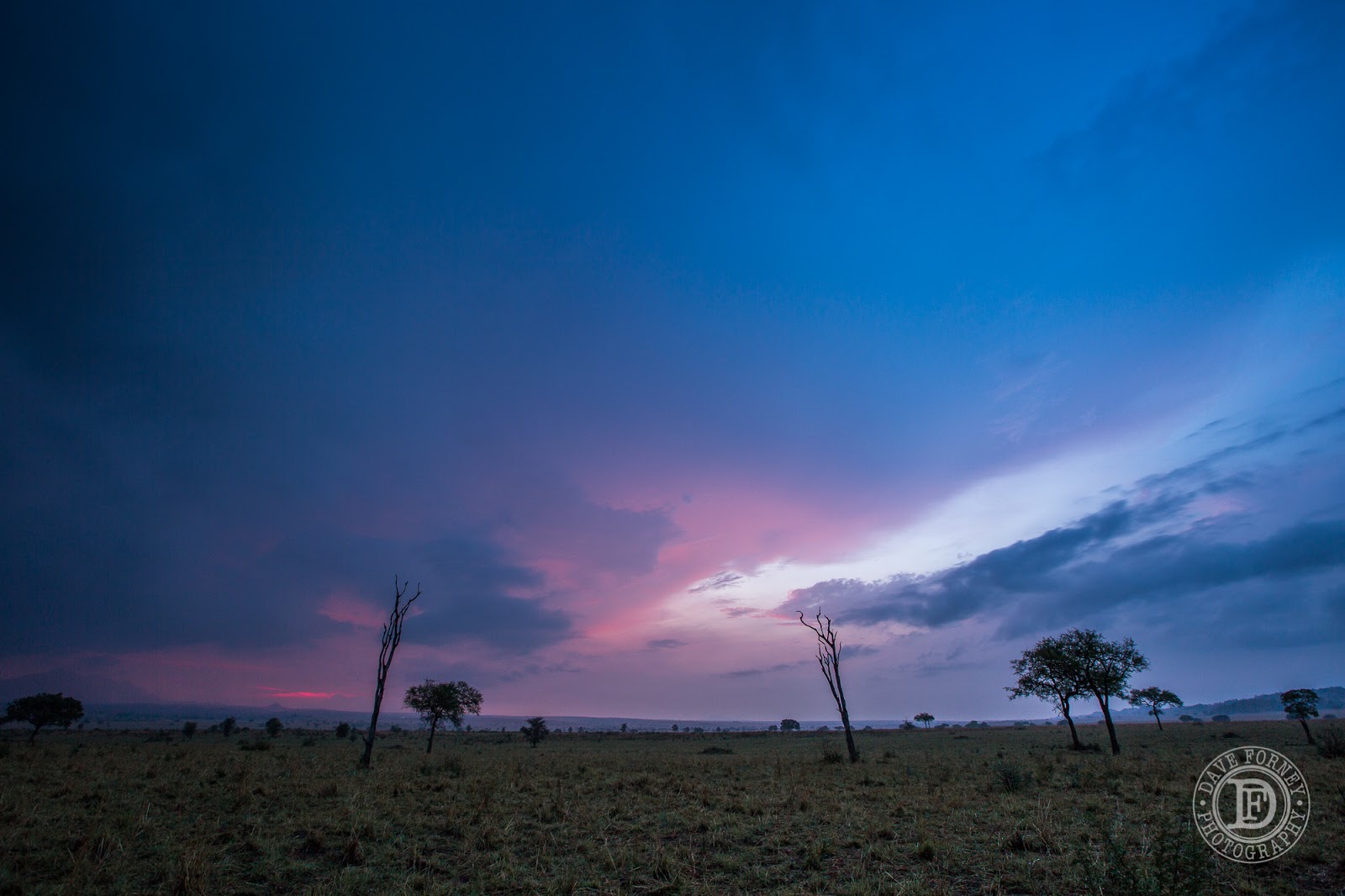 The last evening we were there, we drove to the top of a hill to watch the sunset.  Not surprisingly, the sun disappeared behind another wave of clouds before it sank beneath the distant hills, but we still enjoyed the views.  Britt and Jonathan had the best seat of all, on top of the Land Cruiser. 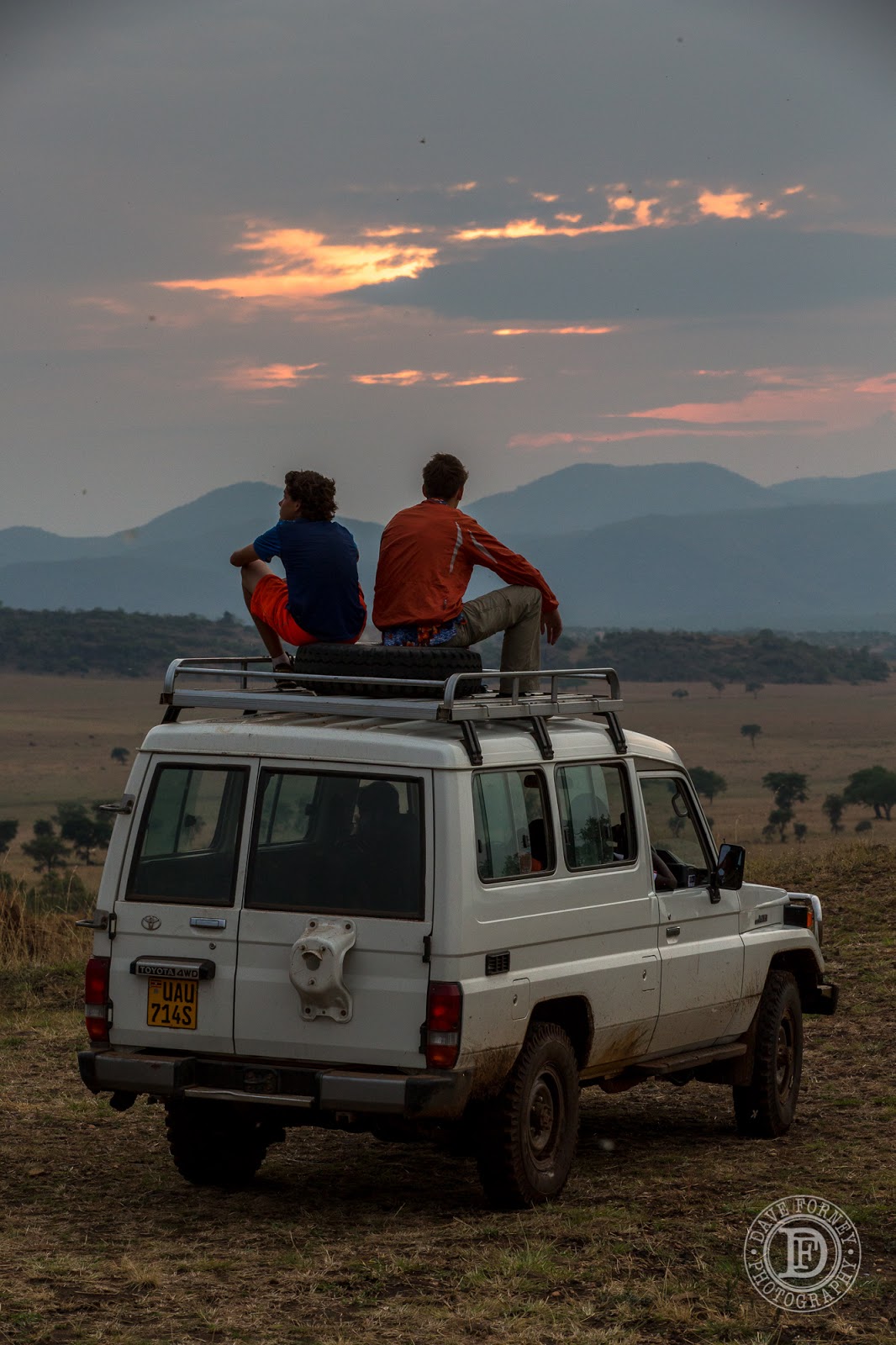 On Monday, we were picked up at the dirt airstrip by one of the MAF planes, and flown back to MAF's home airfield in Kajjansi.  All along the way we fought these storms, as they pushed their way deeper into Uganda.  In the shot below, about 15 minutes into the flight, South of Kidepo, it's easy to see how parched and dry the land was.  However, within a few days much of this land was actually covered in water, and within a week it had all turned green again. 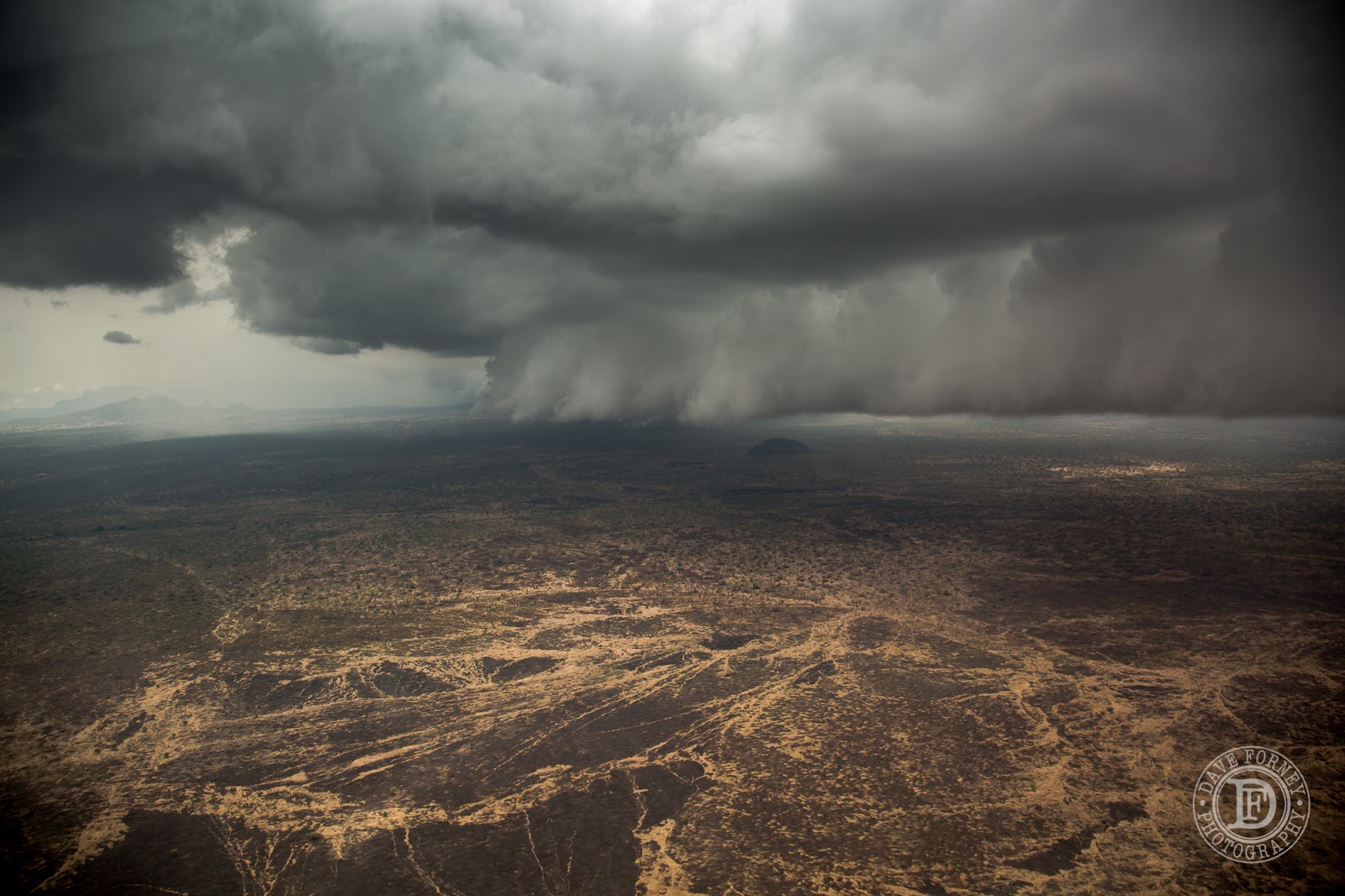 Here's a shot of the grass lands inside Kidepo Park itself.  When we arrived, all of this was completely brown--in fact, much of it was black because of fires that had burned the grasses.  But by the time we left, three days later, already you can see the tinge of green beginning to take hold--and the ponds, streams, and swamps beginning to fill with water. 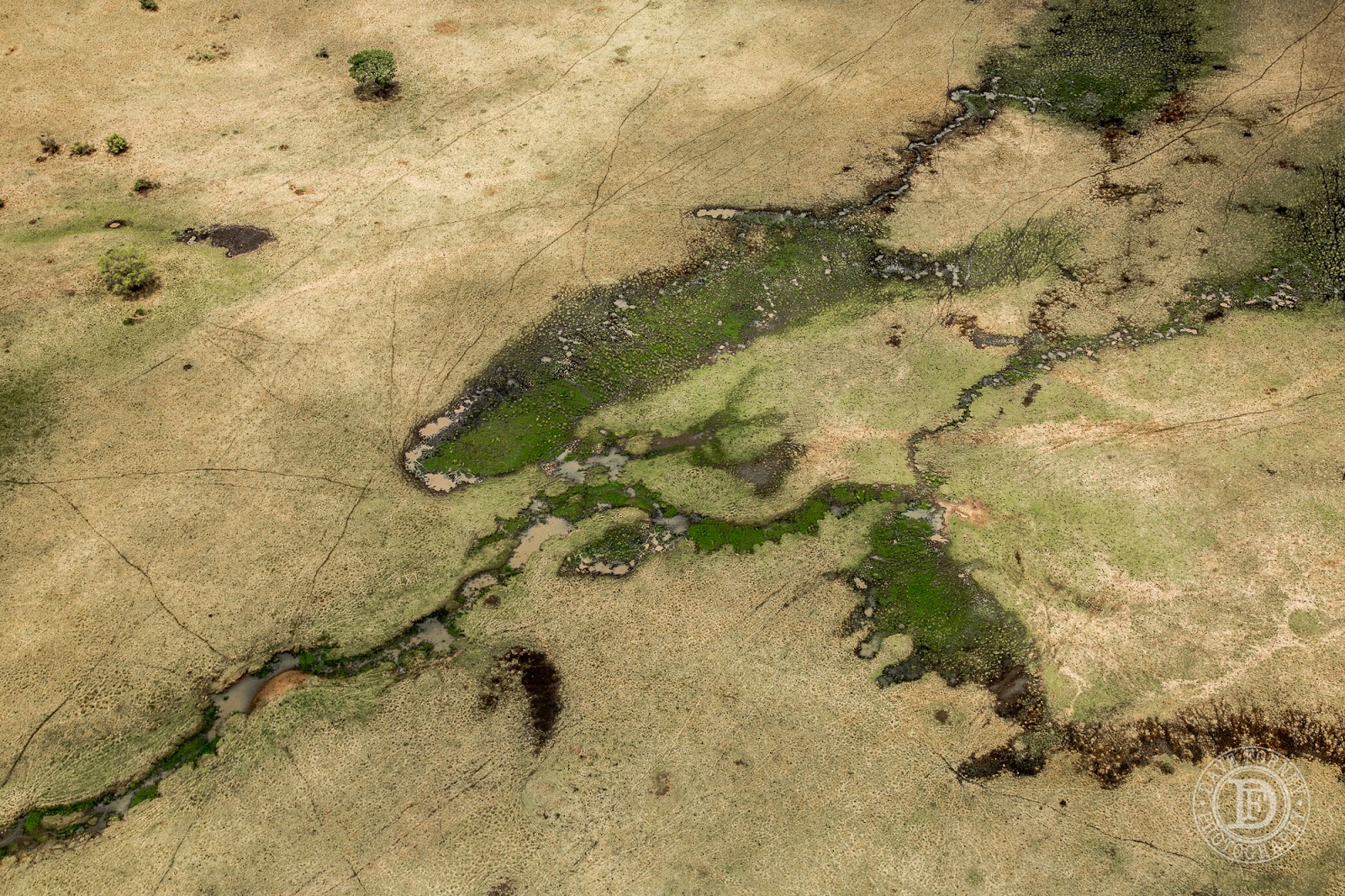 Check back next week, when I'll show you some of the beautiful animals we saw while in Kidepo.
Posted by Dave at 8:26 AM