Here's a shot from a few weeks ago--one of our Cessna Grand Caravan aircraft departing from our home airstrip in Kajjansi, Uganda. As I mentioned in a previous post, it's been very wet for the past few months.  This was actually one of the "dry" mornings, but there were still a lot of puddles in the slight wheel depressions of  our dirt strip. 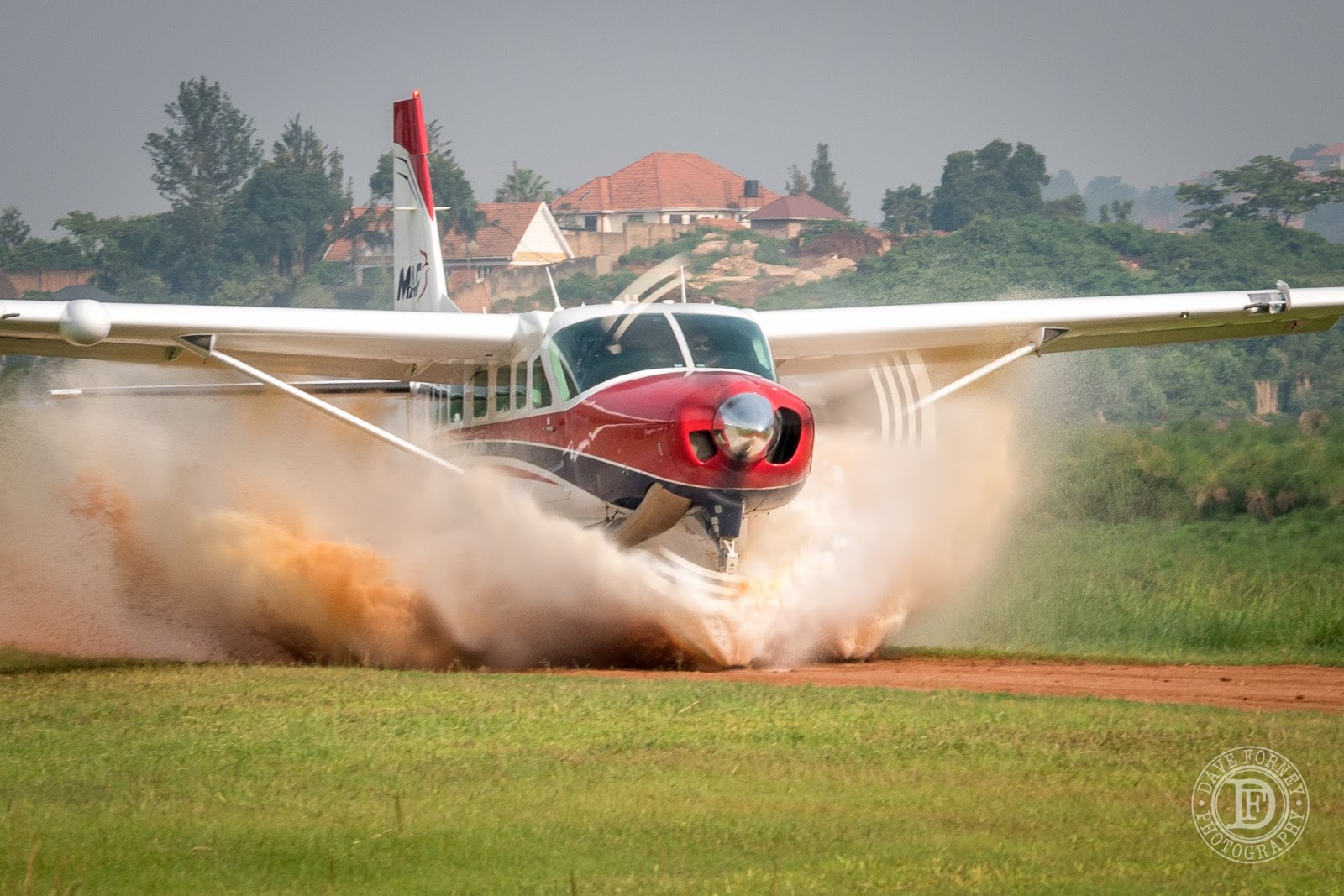 The stormy weather definitely brings some additional challenges to the flying, but the resulting views from my office window have been popping with vivid shades of green and blue.  Here's a sampling.

Below: Near Soroti, Uganda there are large swampy areas. Some day I'd like to get a canoe and explore around these places to see what lives there. 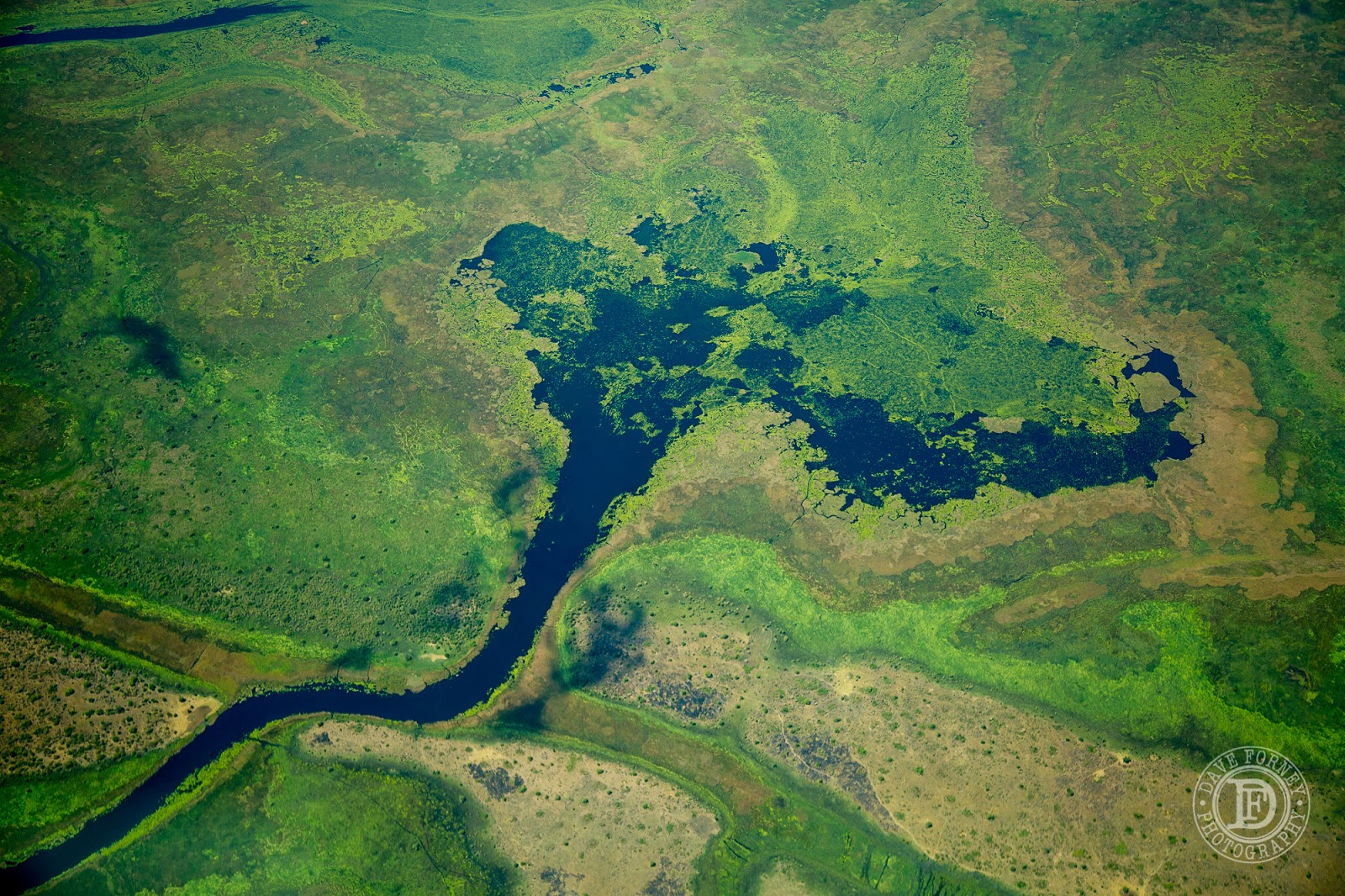 The stormy weather clears the dust and smoke and provides for beautiful, expansive skies. It reminds me of the American Southwest. Here's some shots from around Karamoja, in Northeastern Uganda. 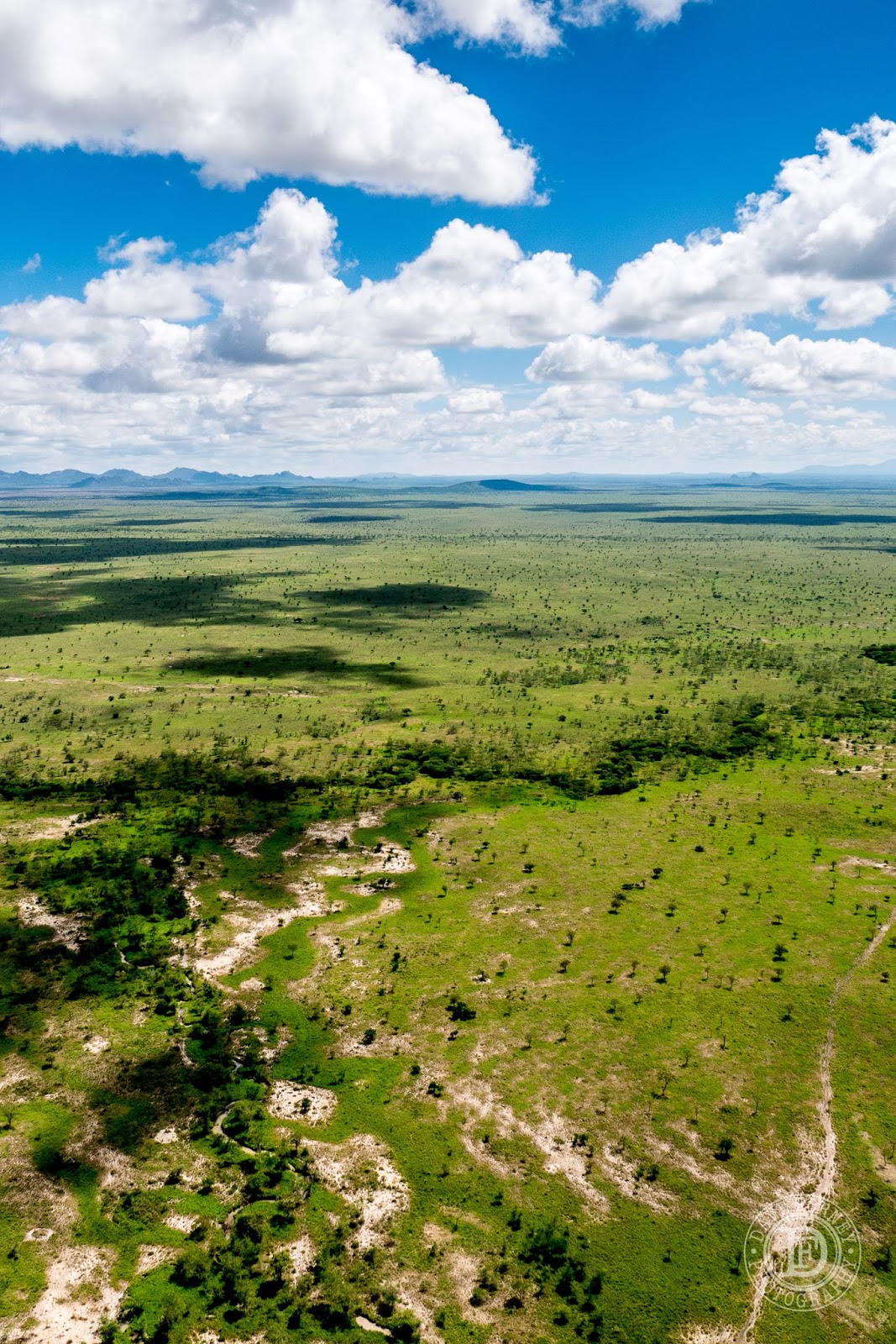 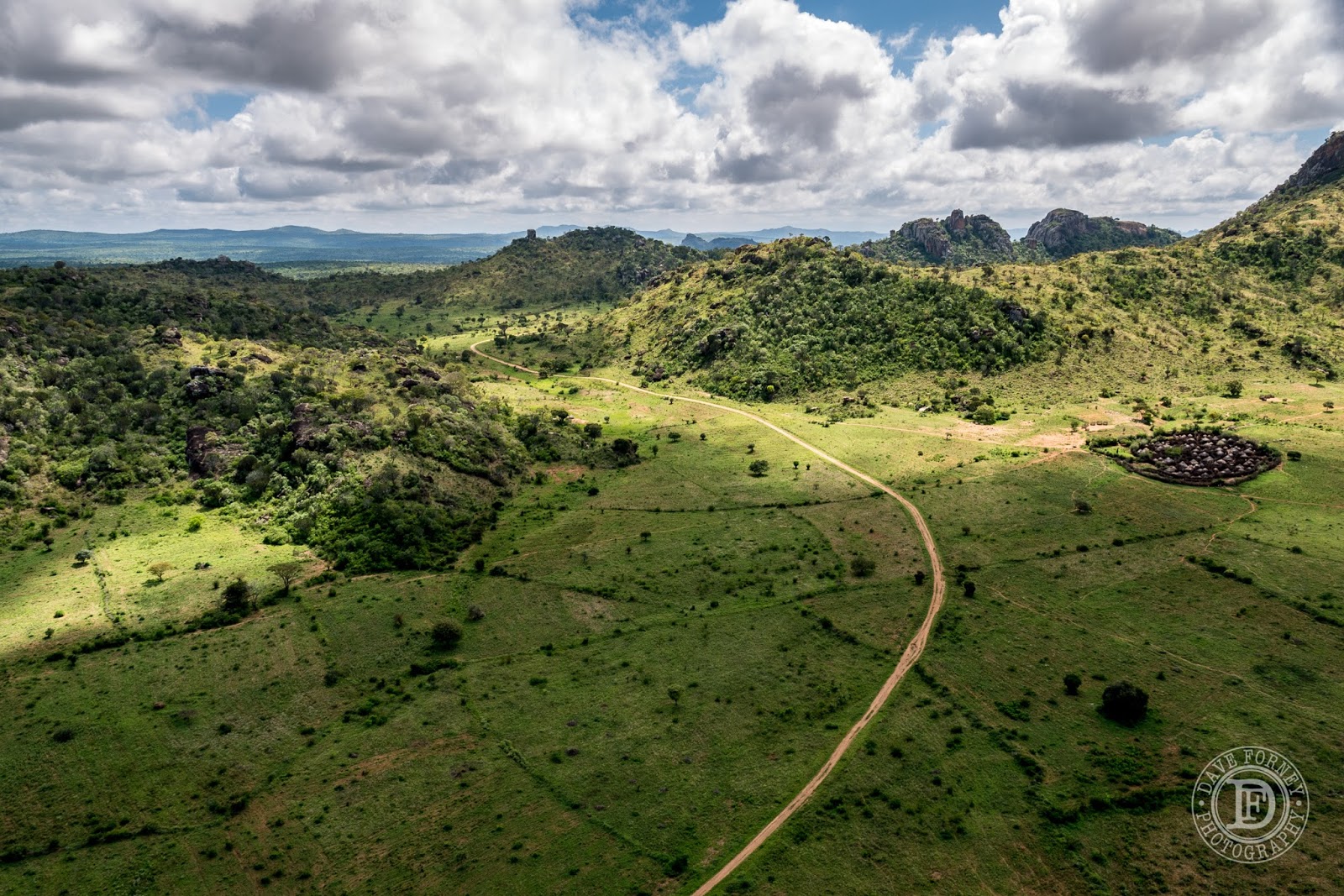 But all of this green is about to end. In fact, it's already beginning to turn brown.  The seasons have changed and we're now entering the big dry season. It doesn't take long under the brilliant, hot, African sun, and with the strong accompanying winds, for this vast land to dry up and turn brown. Compare the two shots above (taken a few weeks ago) to the one below (taken a year ago, part way through dry season). These shots were taken in the same geographic area and they give you an idea of the changes that are now underway.  Soon, the land will be brown and all of the vegetation will appear to be dead. Even then I find it surreal and beautiful, though I know that life gets a lot more difficult for those who live in this region during the harsh months of dry season. 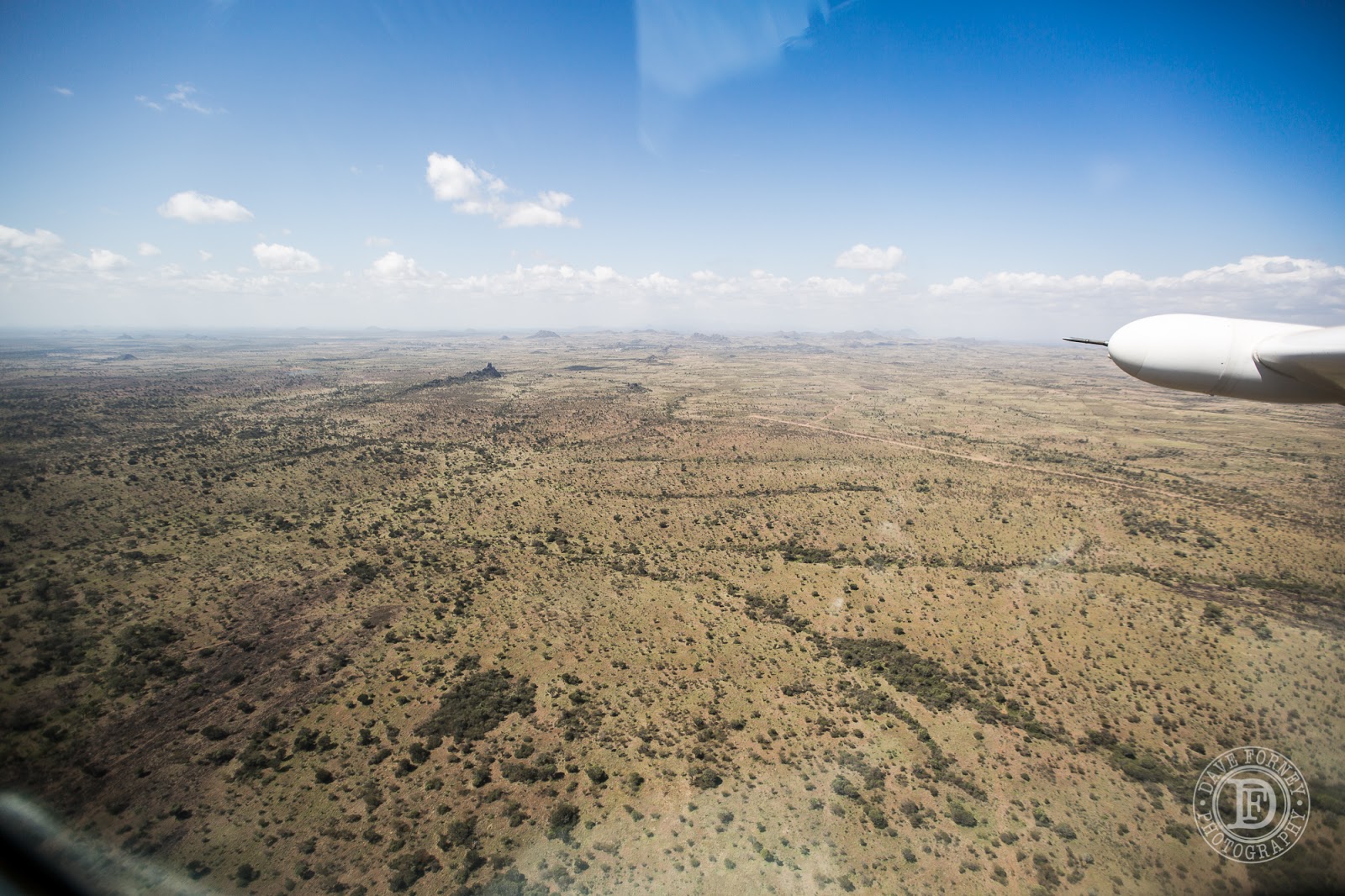 Here's another pair of contrasting shots. Both show the expansive savanna cattle-grazing lands between Kotido and Moroto--the first taken a few weeks ago, while the second was taken last year during dry season. If you look closely in the upper half of the photo below, you can see several large groups of cattle--they look like closely packed dots of black and white from the bird's eye perspective seen here.  Each heard is accompanied by a Karamojang shepherd boy who will wander these lands for days or weeks at a time seeing that their cattle and goats get enough life-sustaining food and water. 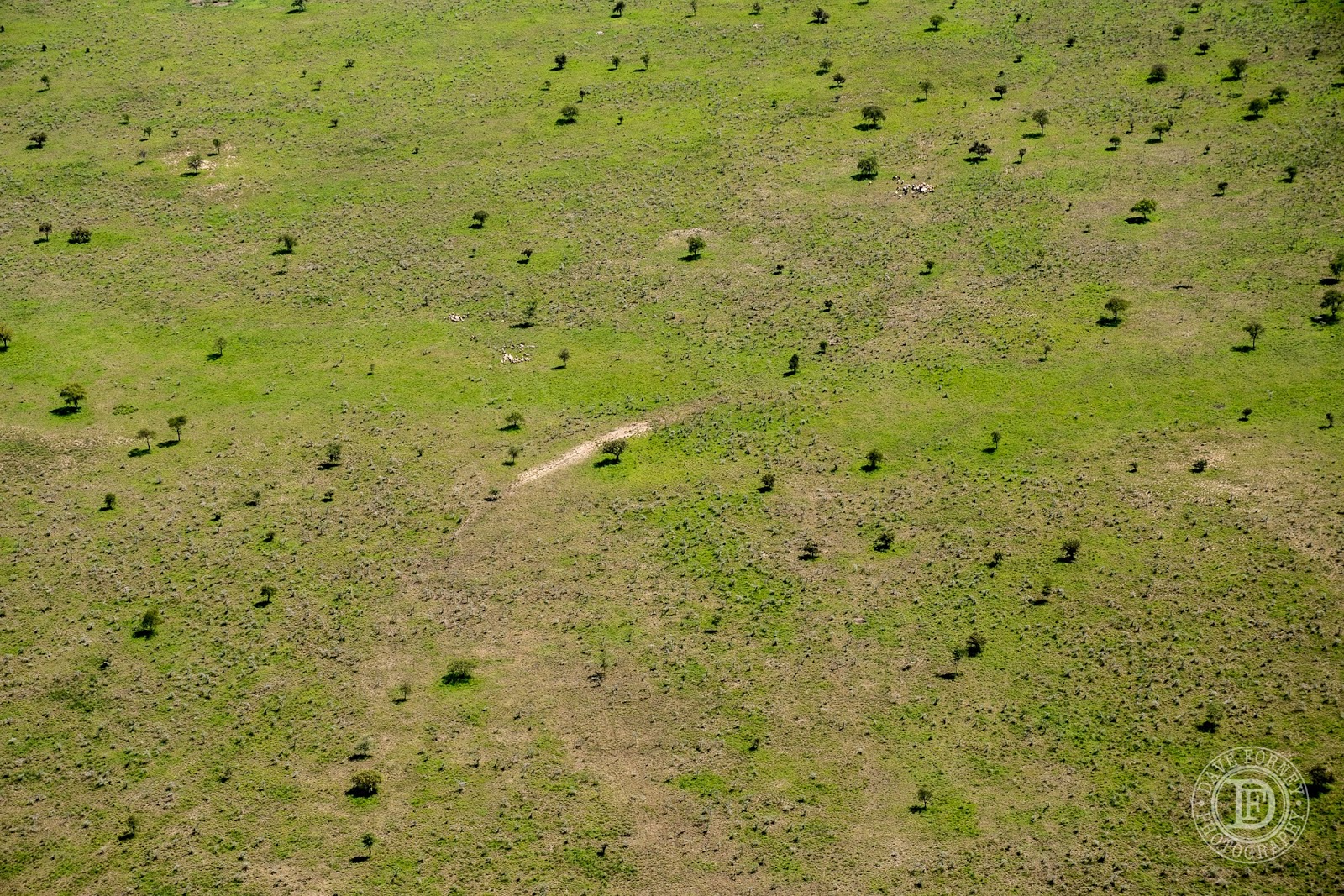 Imagine how much harder life gets for these people (and their animals) when the landscape turns to this...

In years past, the people of Karamoja have traditionally lived mostly from their cattle and goat herds, which they will fight to the death to protect. In recent years, some have taught them about farming, and planting crops, to hopefully help them obtain sustenance from the land itself, and provide another source of food for them and their livestock.  Sadly, this year, ALL of their crops failed. The big dry season typically lasts through May or June. Last year, the end of dry season came a bit late, and when it finally did try to end, they got just a few, light rains, not enough to replenish the parched earth. Their crops sprouted happily and grew quickly, but within weeks they dried up and shriveled. No more rains came for many months. There should have been a short rainy season during that time, which normally would sustain the crops, and combined with the fertile soil and hot sun, allow them to quickly grow and produce before the long dry season begins sometime around December.

Sadly, the rains did not come and all of the crops died.  That will make it a lot tougher for the people in Karamoja this year. Food will be a lot more scarce and much more expensive! At least they finally did get some good rains late in the year, just before the big dry season.  Although too late to make any difference for their planted crops, the rains did allow the wild grasses to grow, (photos above) which will help to put a little fat on their hearty cattle and goats before another period of long, hot, dry weather. 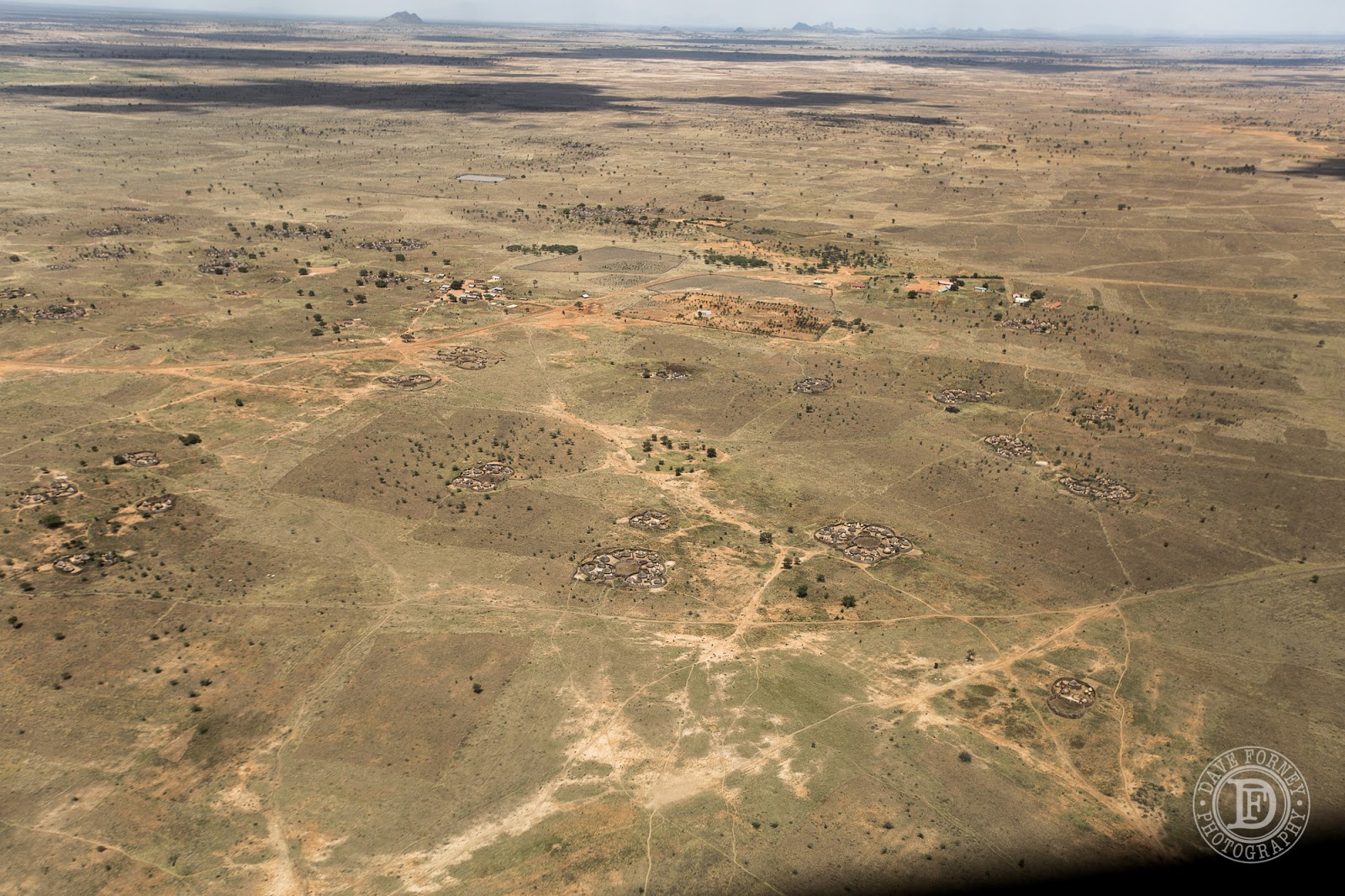 Here's a shot from the Amudat airstrip in Southeastern Karamoja. Soon these tufts of green grass will be gone, each blade withering and turning to dust and blowing away on the wind, along with the large clouds of smoke from the fires which will burn most of the wild grass across the land. 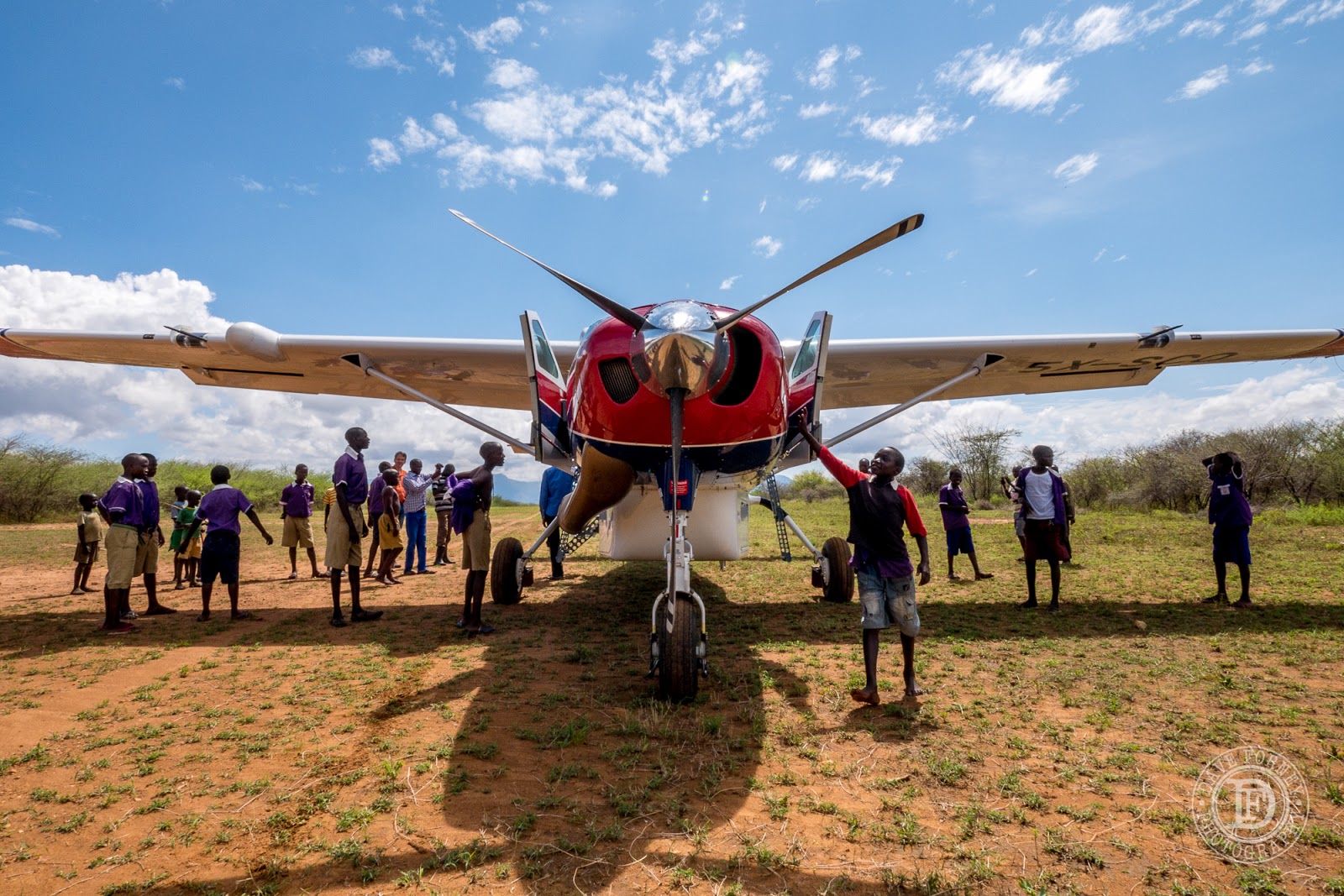 Speaking of airstrips--recently I had the privilege of doing the first landing at the soon-to-be-opened Adjumani Airstrip, up near the border of South Sudan. Here's a shot taken just after I landed, with several of the key people representing several organizations and agencies which have helped to organize, fund, and do the work that made the new Adjumani airstrip possible. I'm the one in the red hat near the center. To my right is fellow MAF pilot, Rembrand, who went up earlier by land, to do measurements and confirm that the airstrip was ok for me to land. 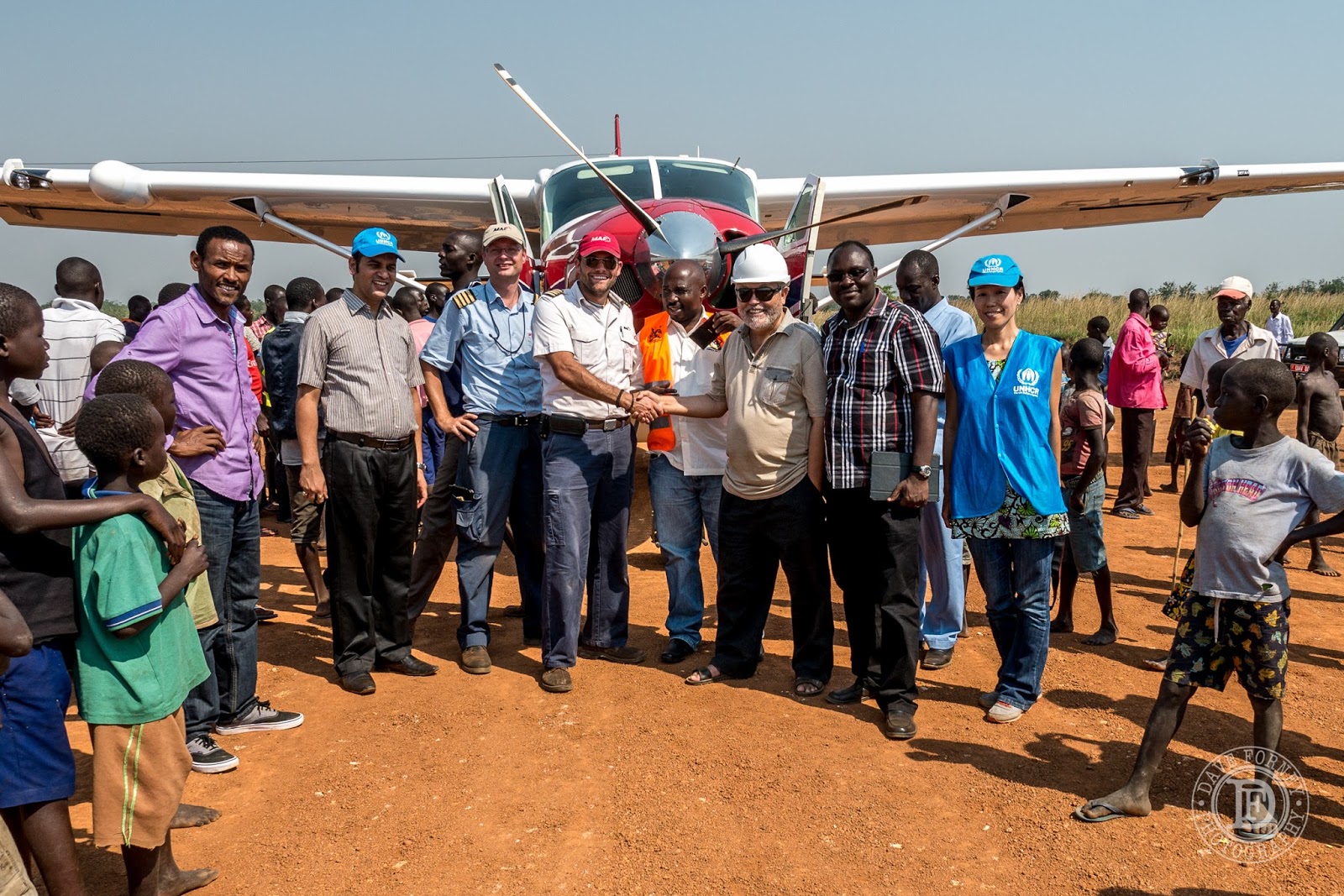 This whole thing started about a year ago, when MAF was first approached about the possibility of re-opening the old Adjumani airstrip. That old airstrip was last used many, many years ago. Since then it became totally overgrown and indistinguishable from the rest of the "bush". There was no way an aircraft could even consider landing there again until the airstrip was rebuilt--or more realistically built again from scratch.

For the past two years, Uganda's neighboring country to the North--the youngest country in the world--South Sudan, has been suffering through a horrible civil war. As a result, tens of thousands have been killed, and millions displaced. Many of these war refugees have fled into Northern Uganda. Adjumani has become the center of the international response to the South Sudanese refugee crisis in Uganda. As a result, there are MANY international aid agencies and missions who are working feverishly from this area. In fact, it's quickly becoming one of the busiest humanitarian efforts in all of Uganda. So, several of these got together and requested MAF to help give them guidance on what needed to be done to get the old airstrip operational again, with the hope that we'll be able to provide them regular air service between Adjumani and Kampala, as well as options for medevacs, special supply flights, etc.

So, last March I went up to Adjumani, by land, along with fellow MAF pilot, Dallas, so we could do an extensive survey of the old airstrip site to determine what needed to be done to re-build it, and bring it up to modern usable standards.  Here's a shot of me and a couple of the key guys from the agencies taking charge of the project, as I began taking measurements on the old airstrip site.  Do you see that dark mound of dirt at the right side of the picture?--it's one of many giant ant hills that peppered the overgrown old strip site.  Those are obviously not good for aircraft! Not only do they stick out high above the surrounding ground, but the tunnels and soft ground beneath extend far below and beyond what you would probably imagine possible.

Fortunately, they're all gone now.  In fact, they didn't just try to build a new strip on top of the old one--instead they dug out everything and started with a brand new foundation. The top is crowned with several layers of beautiful, compressed mural, and there's good drainage to boot.  The new strip is beautiful--it will probably be one of the nicest strips in all of Uganda when it's totally finished. 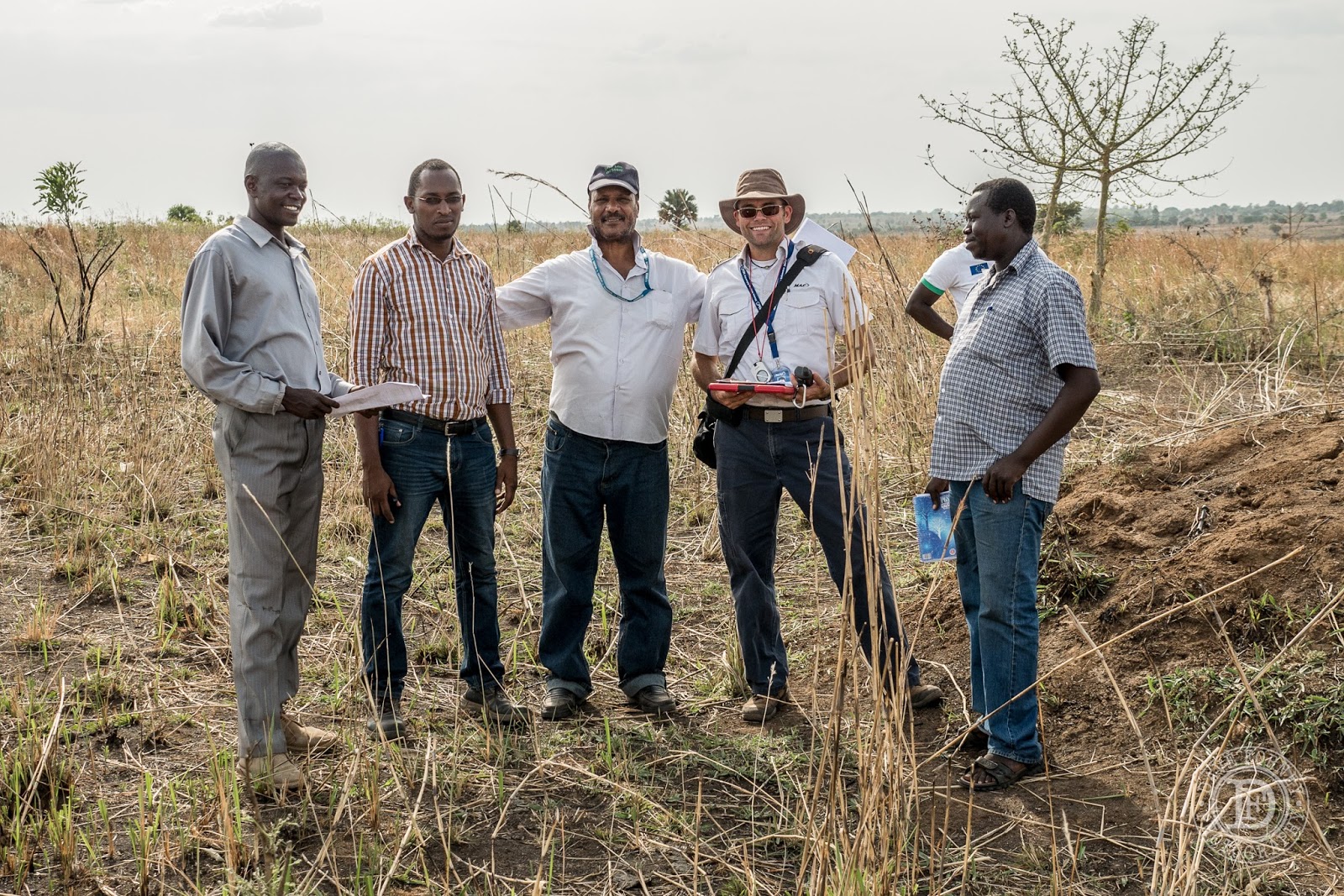 Well, here we are nine months later, just after the first aircraft landing a few weeks ago.  You can see that SO much work has been done! If you look in the distance behind the standing people, you can see the beautiful murrum (dirt) strip extending well over a thousand meters to the west. Eventual plans are to take it all the way out to 1,600 meters! 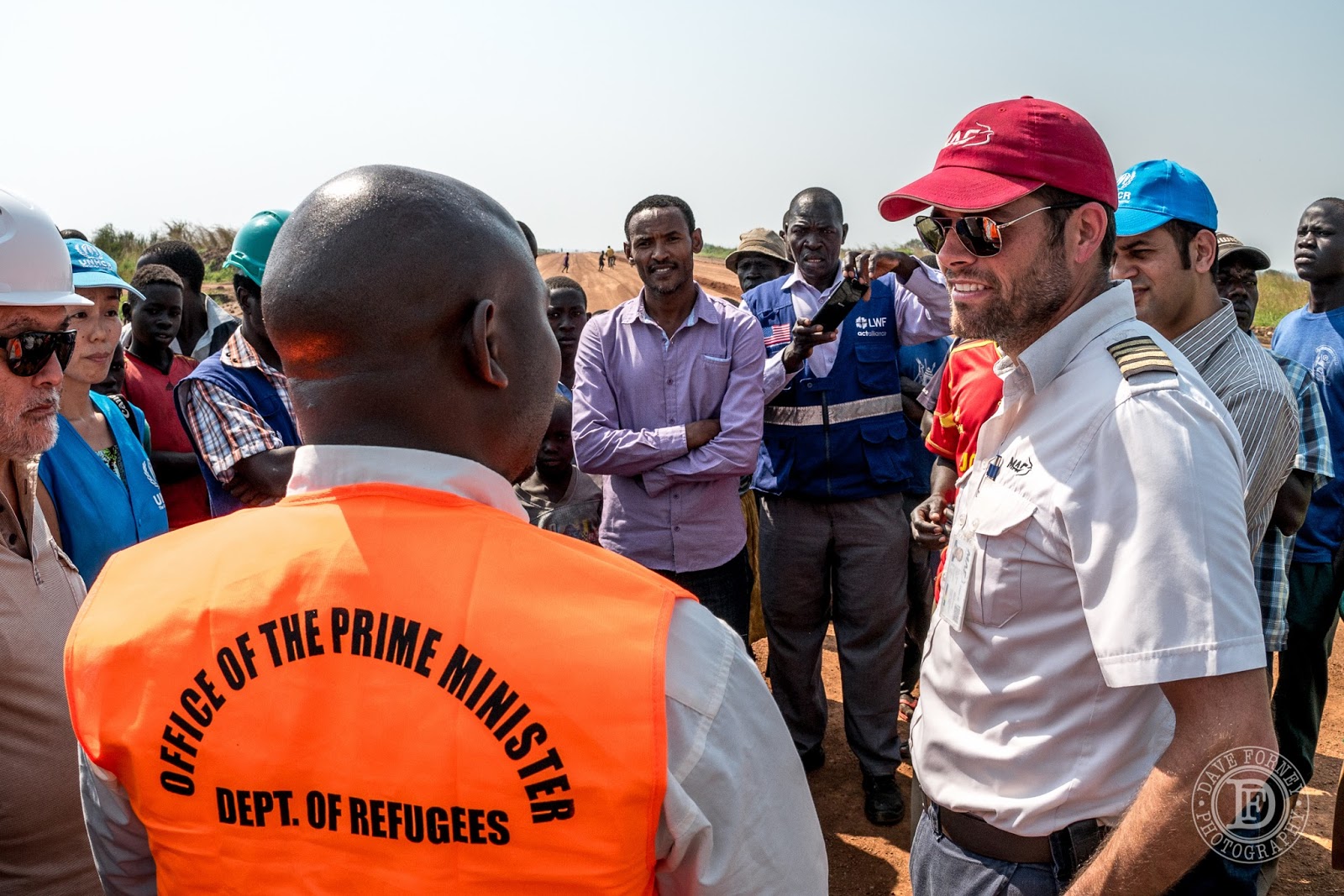 As you would expect, crowds of people showed up to see the plane. It's been decades since a plane has landed here, so they were understandably pretty excited!  There's a few more things that need to be completed before the strip is officially opened, but they are very close, and we look forward to soon providing regular service to the many people who are working tirelessly to take care of tens of thousands of South Sudanese war refugees, who are being settled in camps around the Adjumani area. 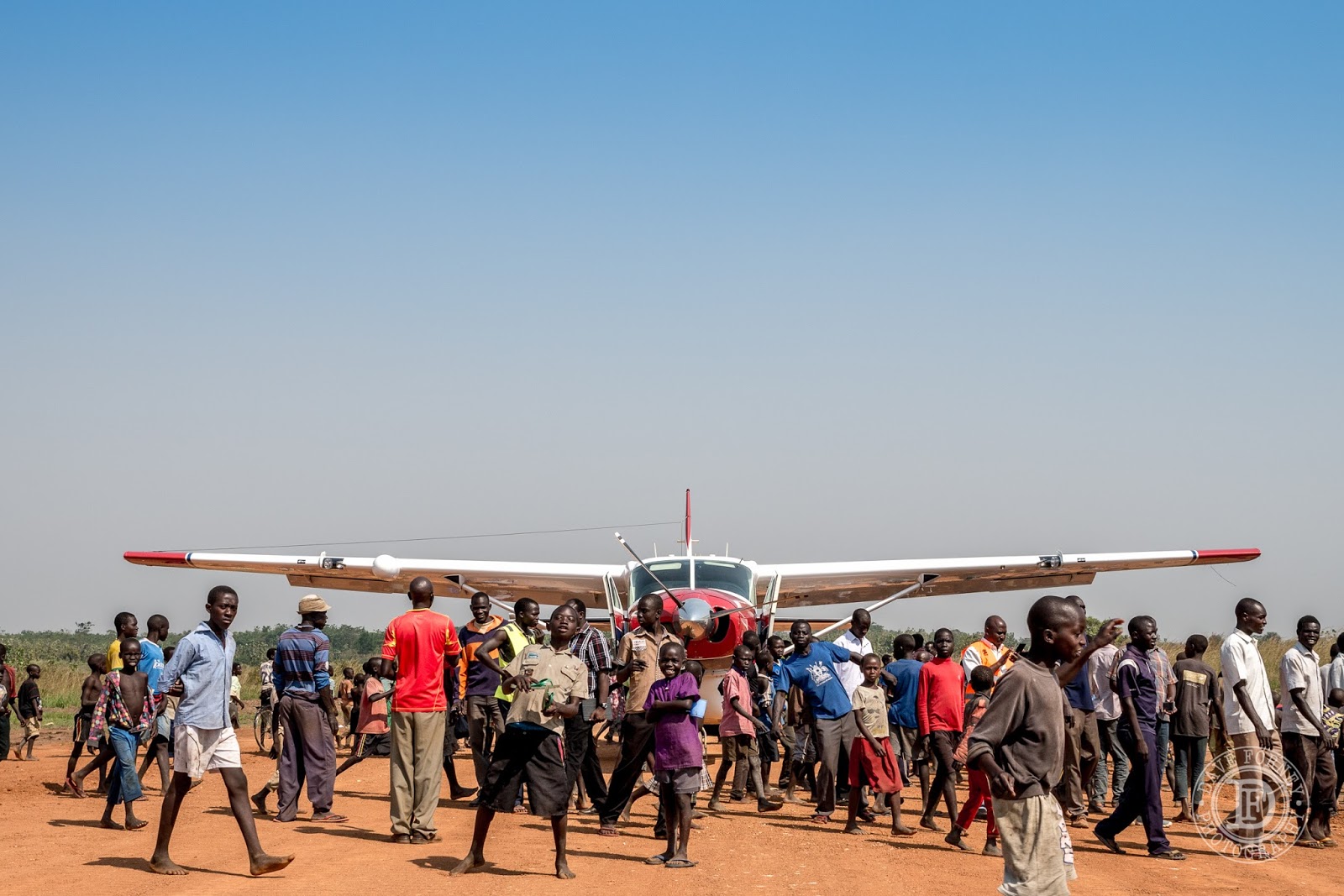 Speaking of airstrips and of South Sudan, here's a shot from the end of the strip in Lokutok, South Sudan, shortly before Christmas. This strip is surrounded by beautiful, rugged mountains and trees. But don't be fooled by the natural beauty--this is a harsh land, where survival is a constant struggle.  If you're like me (before I ever set foot in, or flew over, South Sudan) I assumed that South Sudan was all flat and dry. Not true. In fact, parts of southern South Sudan have beautiful mountains like these, and parts of Southwestern South Sudan are covered in forests (jungles) and swamps.  However, not too far to the North, things do get quite flat, and the further north you go, the flatter and dryer and dustier things get as you approach the country of Sudan itself. 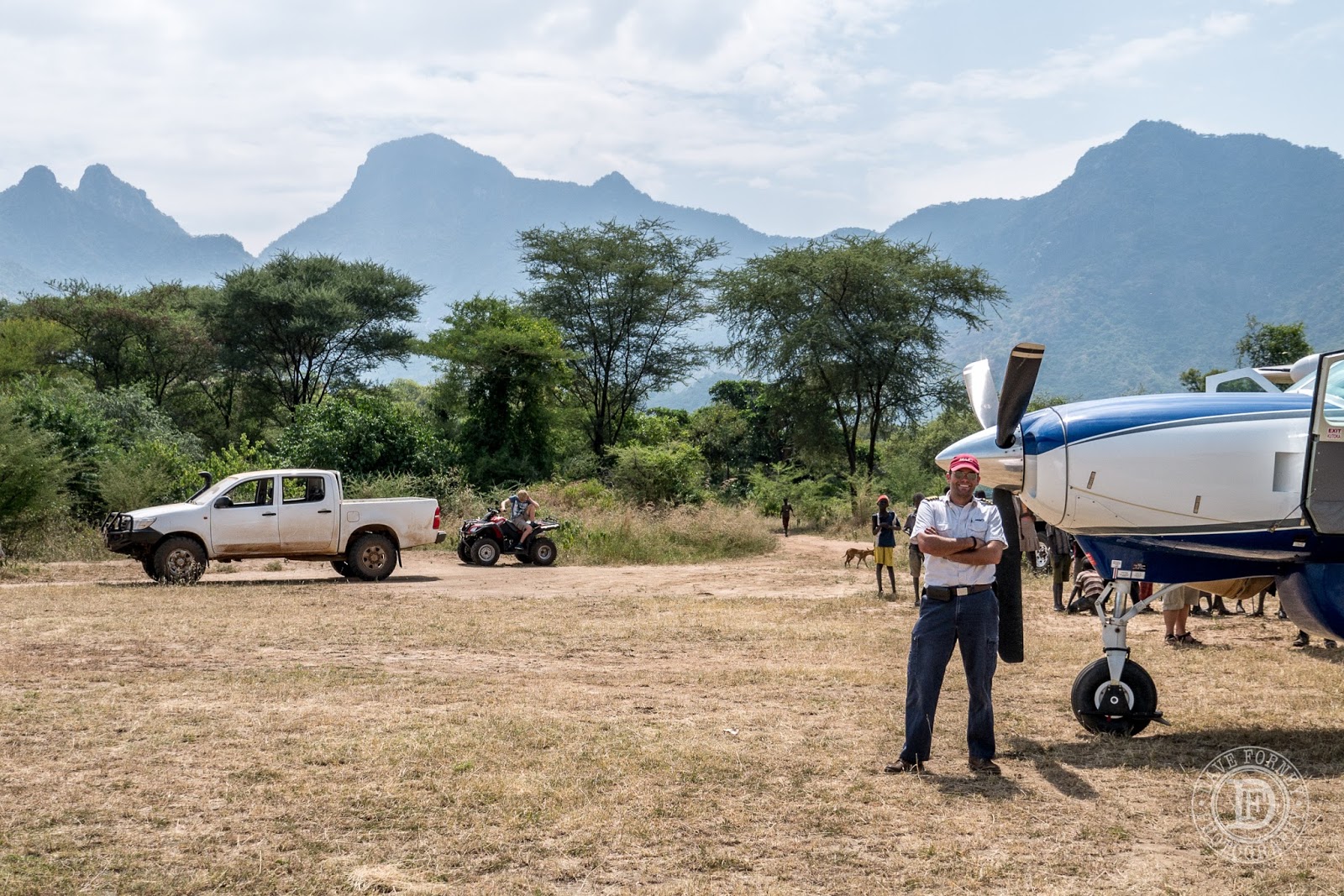 Do pray for South Sudan. The situation there is beyond difficult. Many local people are suffering beyond what we can imagine. And those who live/work/minister among people in remote parts of South Sudan face daily risks and hardships that go far beyond anything typically encountered in Uganda. MAF plays a vital role in their work, by providing regular transport and supply flights, as well as evacuations when necessary. Many of these dedicated people have clearly said that they would NOT be able to continue their work if MAF were not here to facilitate flight services.
Posted by Dave at 2:14 PM