As promised, here are a few shots of some of the animals I saw while in Chad. These first five photos were taken in Zakouma National Park in the southeastern section of Chad. 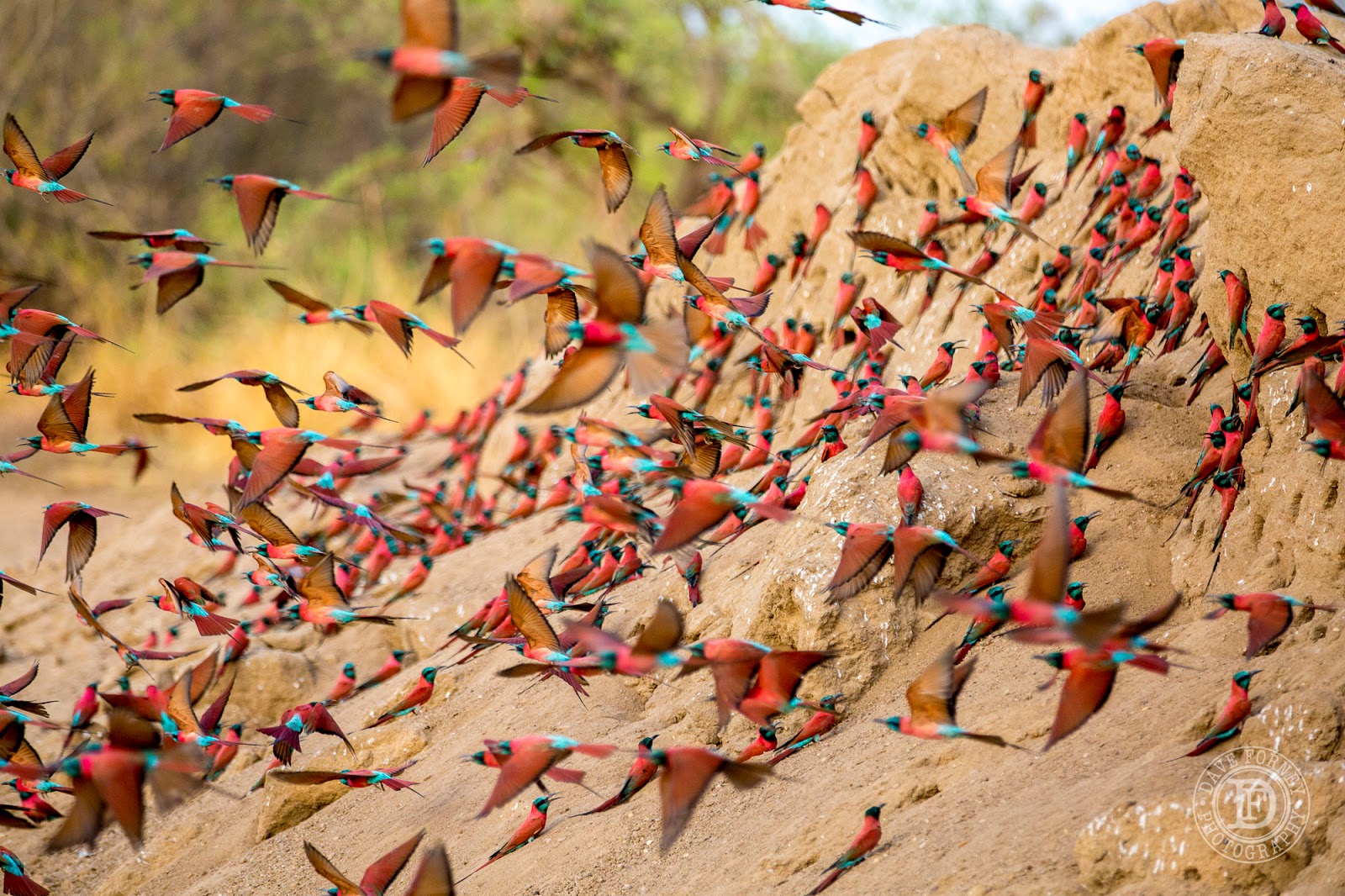 We flew down there late in the day, and spent the night in the park in order to be able to leave very early the next morning. Our passengers had international flight connections from the capital city that next day, and we wouldn't have been able to get them back in time unless we were pre-positioned to the park the day before. These shots were taken on the short, meandering drive from the dirt airstrip to the lodge.

These northern carmine bee-eater birds were as loud and raucous as they were colorful! 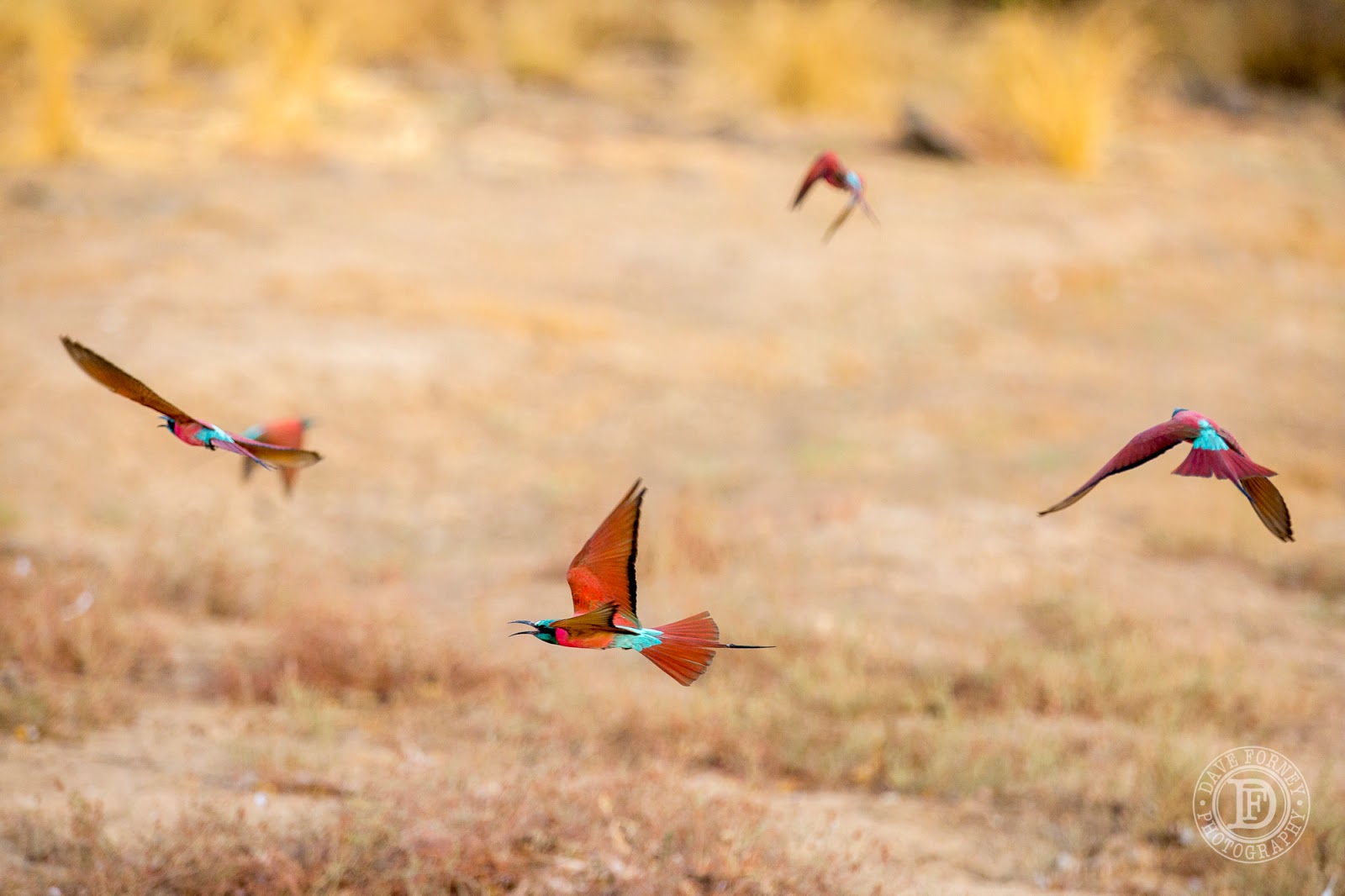 Not so colorful, and with an overwhelming accompanying stench that made our eyes water and our stomachs turn, were the marabou storks and vultures feeding on the rotting remains of a buffalo. The Marabou stork is one of the largest birds in the world, with standing heights reaching about five feet, and weights of up to about 20 lbs. Their wingspan can easily be 7-9 feet across, and the largest on record was 12 feet across! There are unconfirmed reports of them  being even bigger! We often see them circling over Kampala in large groups, at exactly the traffic pattern altitude that our aircraft fly over the airstrip. Several times I've seen them much, much closer than I'd like to from my 'office window.' It would not be a good day, if we hit one of these giant, ugly birds in the air. But they do play an important role, along with the vultures and other scavengers, in a well balanced ecosystem. (I definitely prefer seeing them here, in this environment, as opposed to in the city, where they love to hang out and eat the garbage.) 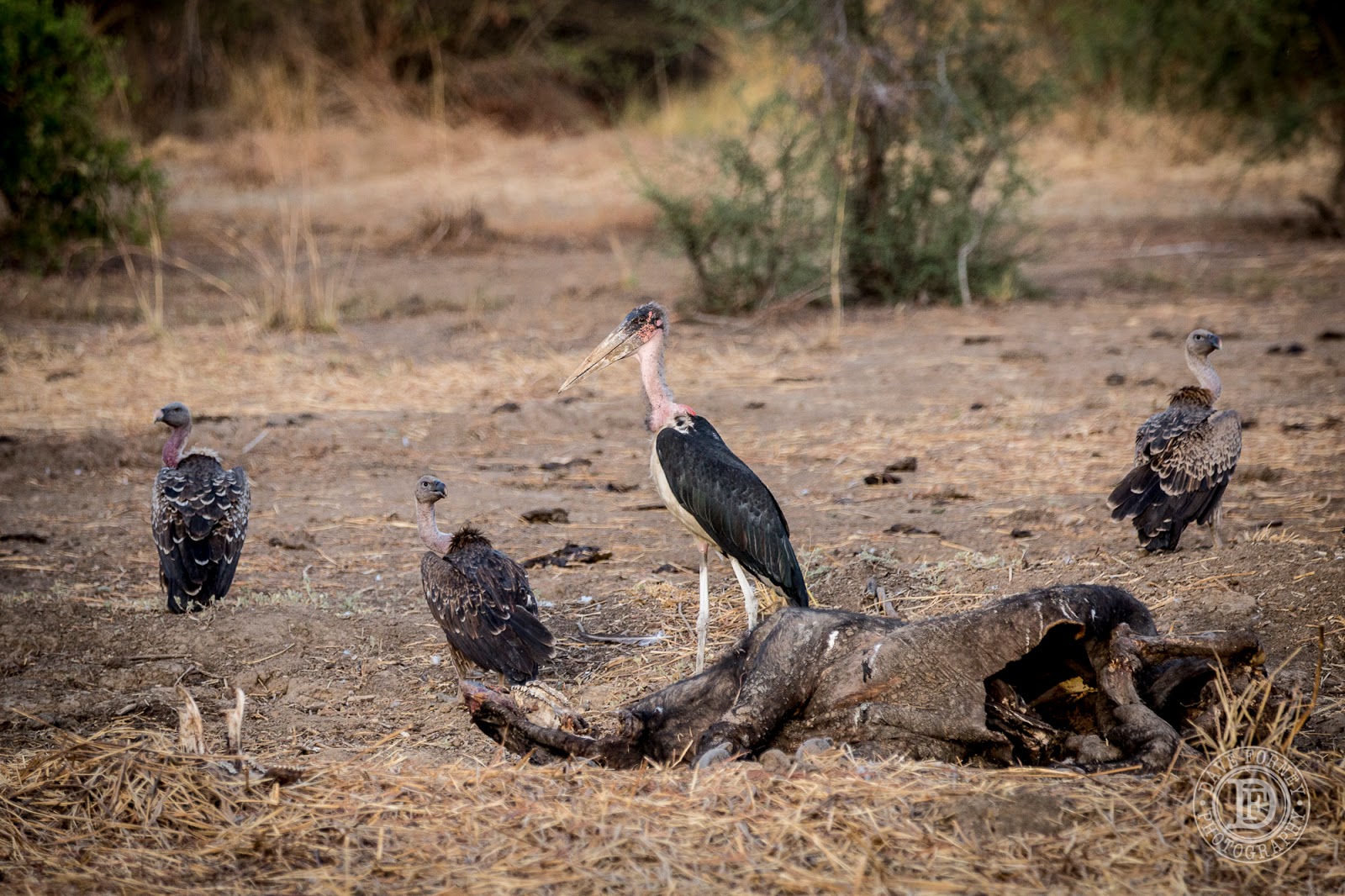 It was very nearly the end of dry season when I was in Zakouma National Park. The river was mostly dry, and most of the former lakes and ponds were either dust bowls, or were marked only by a dark dirty stain in the dust, with some thick, soupy mud and 'water' the middle. But the animals that live here, like these giraffes, know where and how to find the water they need to survive. These were some of a heard of about two dozen giraffes that were quenching their thirst as the sun was setting. 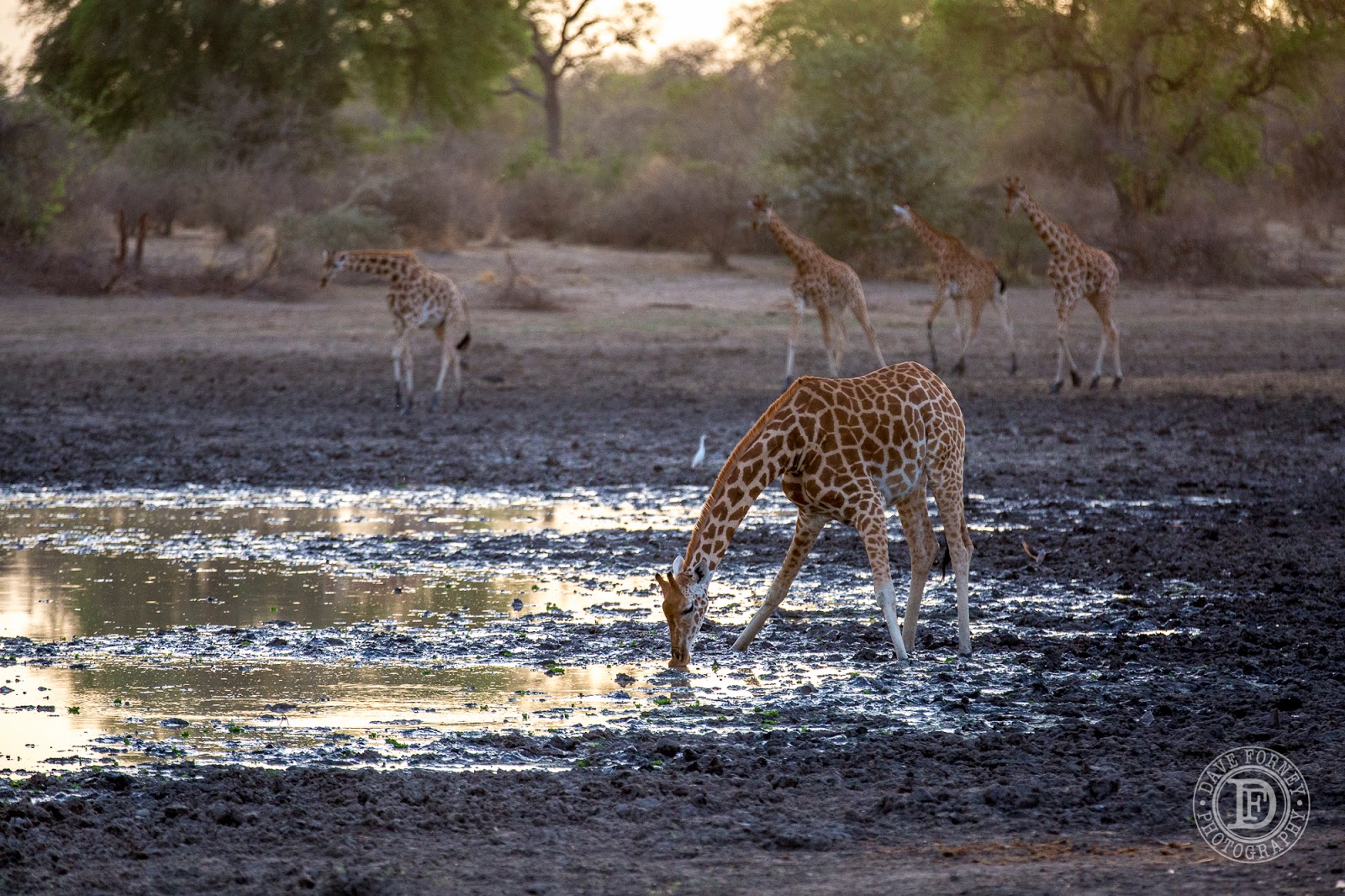 It was dark by the time we reached the lodge, which is located by a small river. The next morning I saw that the river was almost completely dry. However, there were isolated pools of water that remained here and there. The driver took us to one such pool, very close to the lodge, to show us the resident crocodiles. The pool was about the size of a typical swimming pool, and appeared about as deep (although there was no way to know that.) He turned off the engine and we quietly coasted down as close as we could get on the vehicle track. Then we walked up to the edge and peered down over with our flashlights. I expected to see one or two crocodiles. But what I saw was far more shocking! Dozens of the beasts were everywhere! Some were still in the water, betrayed only by the bright spots of their reflected eyes, but many of them were fully out on the sandy bank, their gaping jaws wide open as they all reflexively either plunged into the dark water, or turned their heads in the direction of the light as if challenging us to get closer. This one held his ground the longest, and he was larger than he appears in the photo. It was pitch dark except for the light of our torch (for you Americans--a "torch" is what the British, and others call it--we would call it a flashlight). Anyway, it was a very impressive scene. The black water was churning and bubbling, and there were sounds of splashing and grunting everywhere. I would never have thought it possible that there could have been so many crocodiles in such a small body of water. Do you see the shadows of the two bats that I happened to catch in the circle of light? 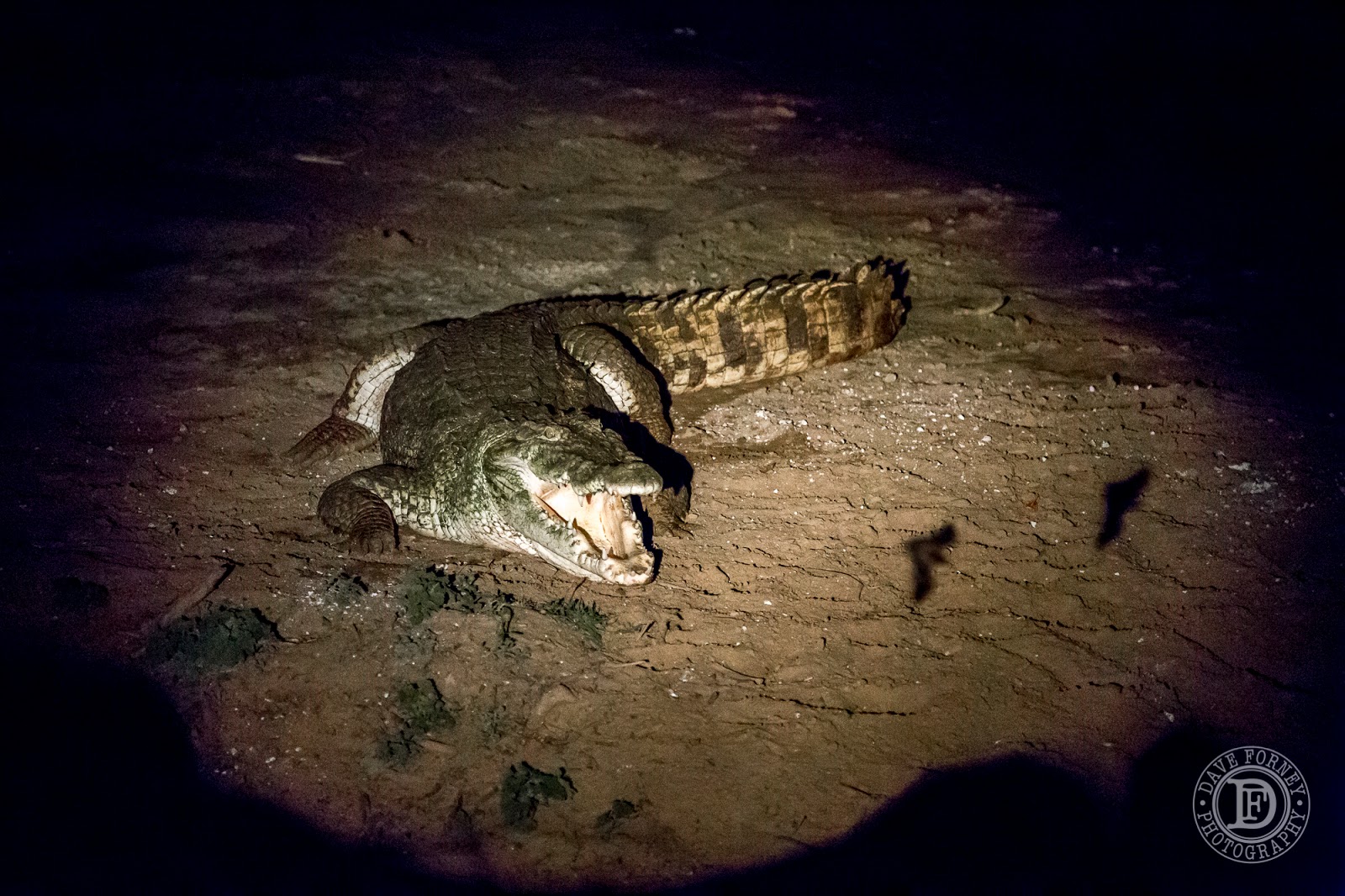 Aside from that one trip to the national park in the south, the rest of my time in Chad was spent in the northern half of the country, which is mostly nothing but desert. It's amazing that any animals can survive in these harsh conditions.

Once, when we were waiting for some passengers in the middle of seemingly nowhere, we (the other MAF pilot, Andrew, and I) walked several miles out into the desert just to "check it out." We saw some large rocks that appeared to be about a five or 10 minute walk away, and they beckoned us. Distances can be very deceiving in the wide open desert, and it wound up taking us probably 45 minutest to get to the rocks. Initially we thought they were maybe the size of a house, but they turned out to be many times larger than that. Of course, we had to climb them, and the view from the top was amazing. While we were up there, we spotted some old bombed-out tanks in another direction, so we headed that way. As we were walking in that direction we came across some fresh camel tracks in the sand--one set of large tracks and one set of small tracks side-by-side. We followed them for a bit, and low and behold, in the distance we saw this mama camel and her calf. They were very skittish, and we weren't able to get close. It's amazing how fast camels can walk! There was no sign of any people anywhere around, but I assume they were owned by someone? I guess it's possible that they could have been wild (I like to think that they were wild) but I know that there aren't very many wild camels left in the world. That said, I've heard that there are still allegedly some wild camels living in remote parts of Chad, so who knows? Lets just agree to pretend that they were wild, even if they weren't. :-) 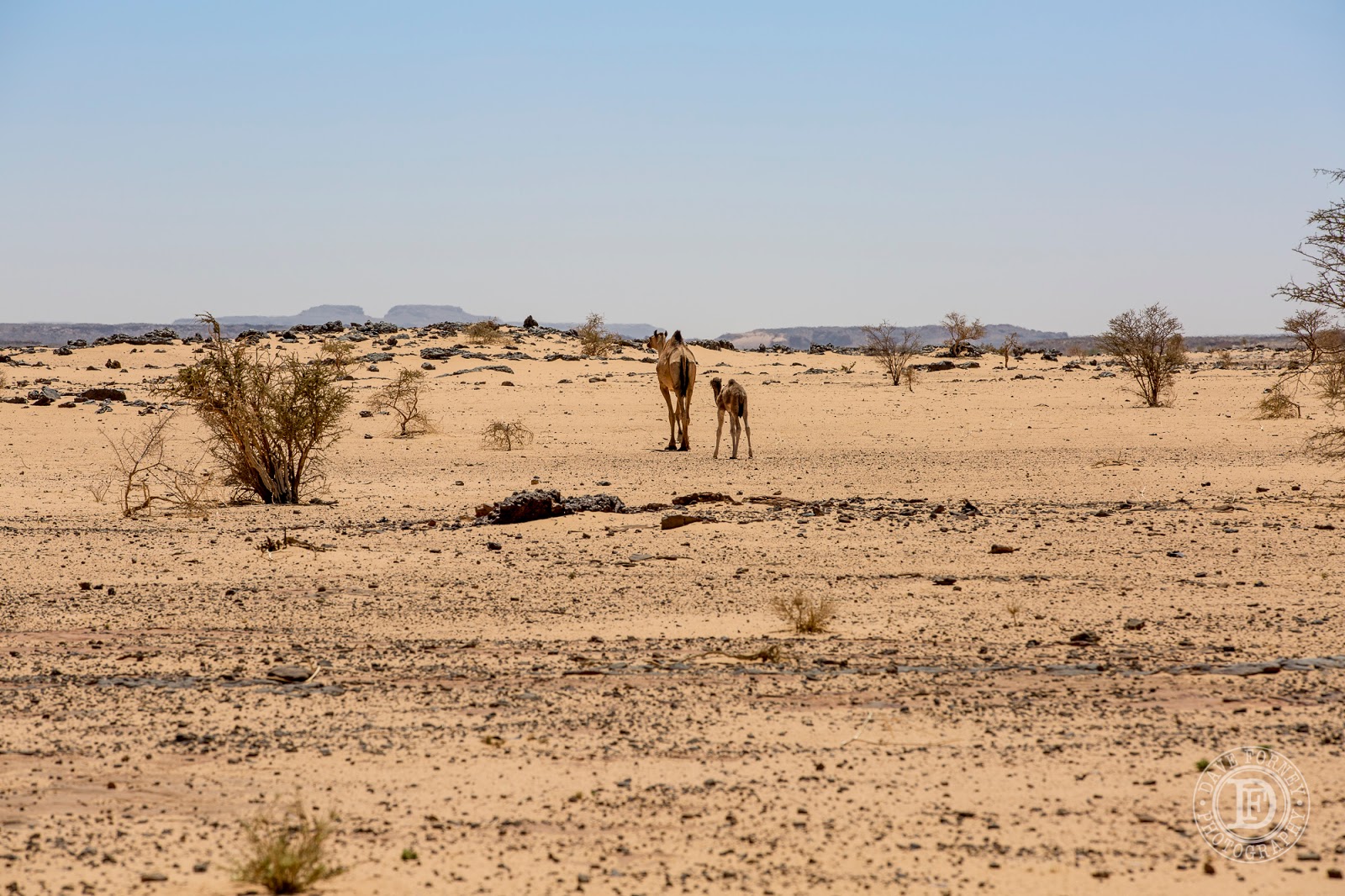 As I was exploring the giant rocks, I came across a sort of slot canyon--the sheer red rock walls extending 75 feet or more above my head, where they seemed to converge into one against the dark blue sky. As I was gaping at the contrast of red rock and blue sky above, I saw something out of the corner of my eye. It was a gorgeous owl, staring at me with huge, striking, golden-orange and black eyes.  Quietly, and slowly I backtracked out of the slot canyon. Then I affixed my longer lens to my camera, got it all set the way I wanted, and then crept back into the canyon and took this picture. 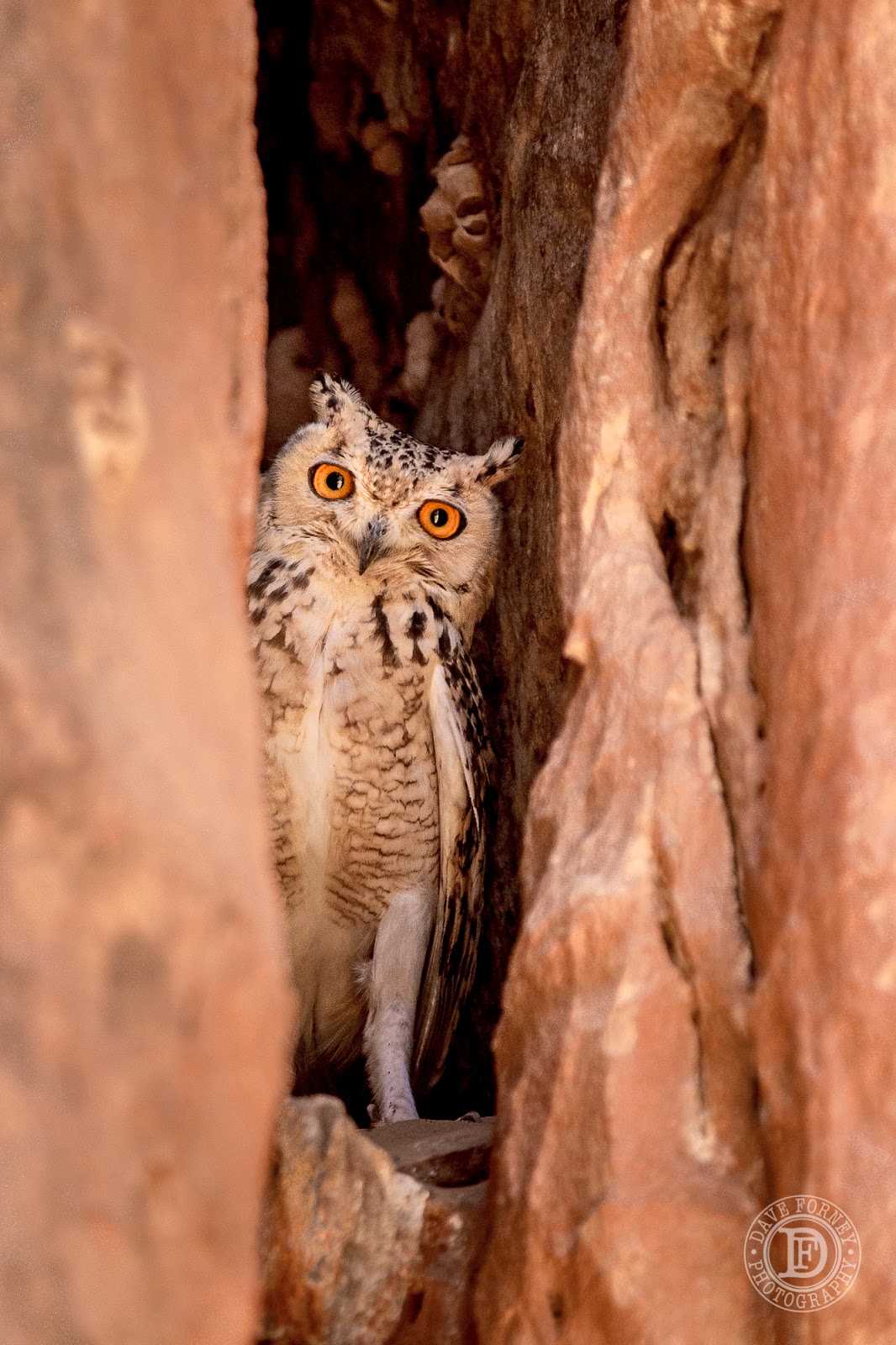 Desert life is harsh and difficult. Only the strong survive! The same, dry, extreme heat which kills so quickly, also preserves, seemingly indefinitely, that which it kills. I came across a several skulls and mummified remains, like the one below, during my little explorations. In the background you can see some old Libyan tanks--another type of 'mummified' remains, which peppered the desert landscape in this area. They are remnants and reminders of a different era--the Chadian-Lybian conflict of the 1980's. 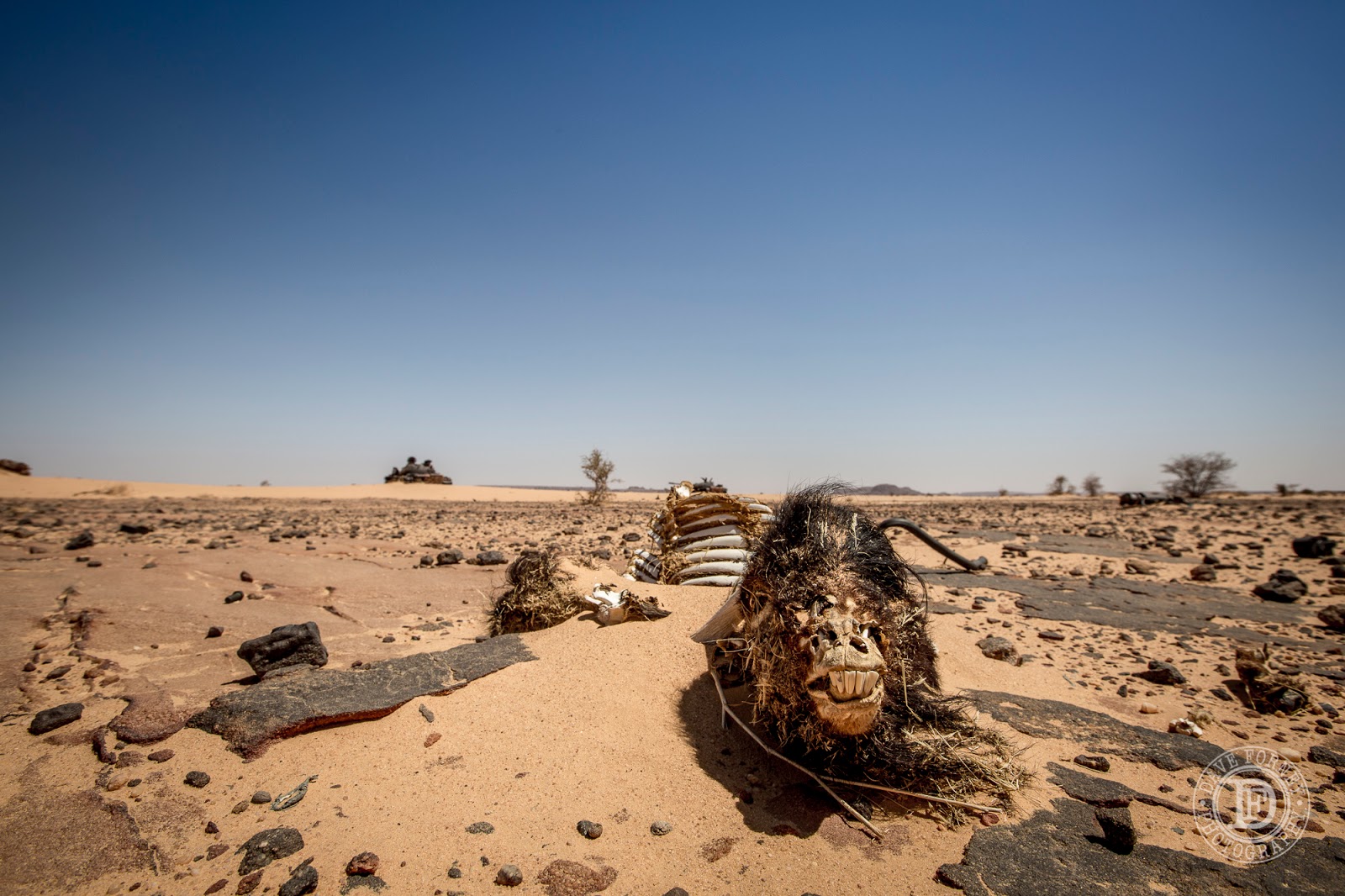 Check back next week... I think I might have one more post related to Chad. I'd like to show you some of the airplane shots, and a few other odds and ends.
Posted by Dave at 10:12 AM

Love the story detail and the pics. And I think camels do fairly easily go back to wild if given the chance. The Australian Outback has feral camels, around a quarter of a million; not native, but brought in during the 19th century as transport animals before roads, planes, etc. So let's certainly agree your camels are wild!

Thanks for sharing Dave.
Ali

Thanks Ali.
Now there are at least two of us who can agree that the camels are wild. :-)