Planes & Other Stuff from Chad

First, some MAF airplanes-in-action shots, way out in the middle of the Chadian desert... 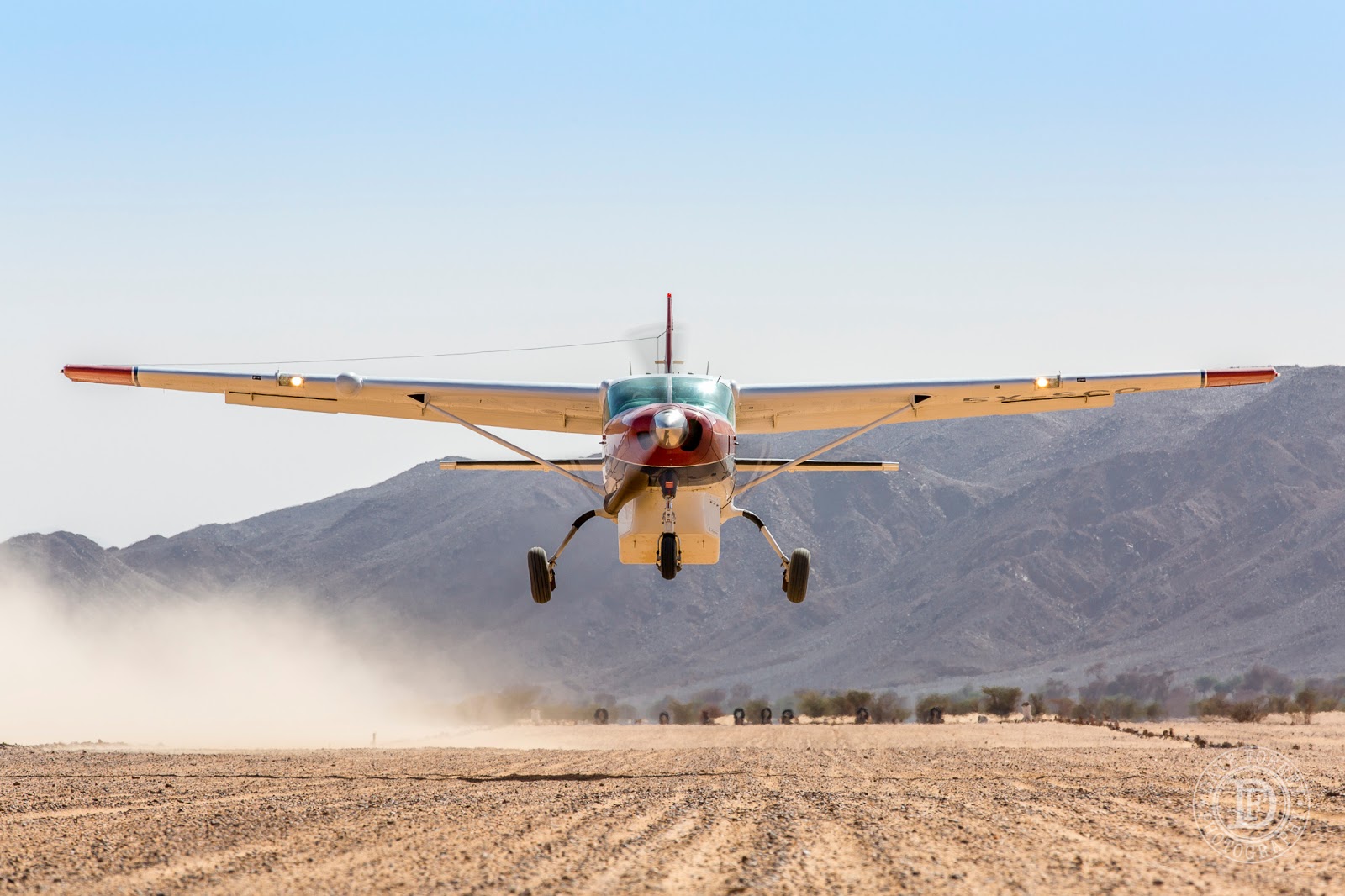 As I've mentioned before, it's difficult to get the proper sense of perspective in the vast, open desert. The photo below was taken from over a kilometer away, with a 200mm lens (the largest I had with me) and a 1.4x teleconverter, and then significantly cropped in post. The plane almost looks like it's being viewed through slightly distorted glass--the result of the shimmering heat waves rising from the sun-scorched gravel and sand airstrip in the foreground. 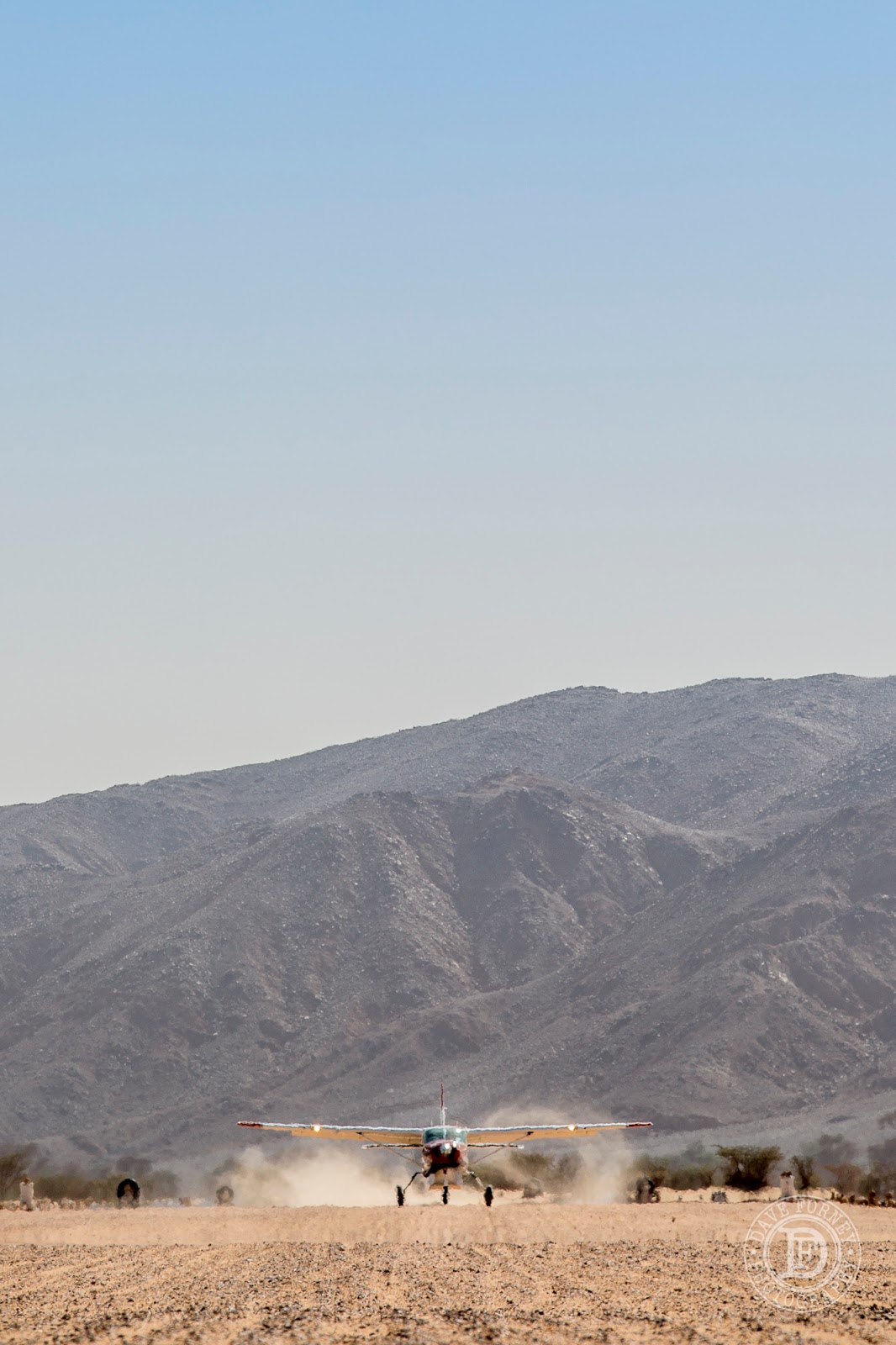 Here's a shot taken at 24mm. A wide angle lens will automatically tend to diminish the size of background objects. Still, that black hill just behind the plane appears deceptively smaller than it should, even with the wide angle lens, because of the immense, open sky and landscape beyond. In truth, it's an incredibly imposing, glistening-black cone, towering almost exactly 1,000 feet above the surrounding flat sands.

In case you doubt me, here's a telephoto shot of the MAF plane as it flies a circuit to land at the strip above, with the same black cone forming the backdrop. Crazy how distance, focal length of the lens, and objects in the foreground or background can change your perspective hugh? 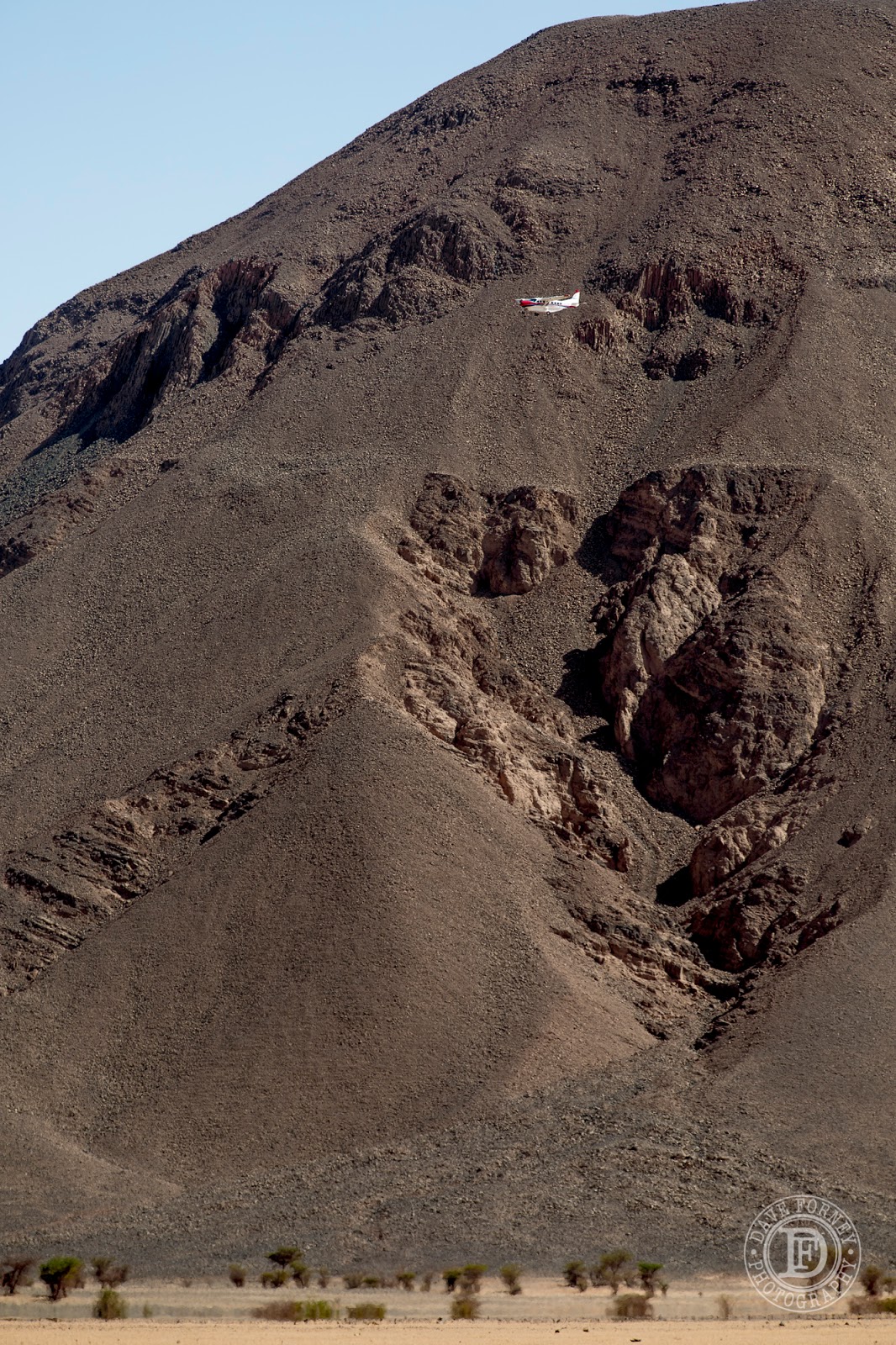 Here's a shot of our parked MAF plane, appearing tiny against the vast yellow sands and deep blue sky of the Sarah Desert.  I took this shot as I was returning from what was supposed to be a 'short walk' to an intriguing rock I saw, not too far away.  We were waiting for some passengers to conduct meetings with local government officials, and decided to explore a bit. Well, the 'short walk' turned out to be a rather long walk, in the same way that the intriguing rock turned out to be a massive, towering, giant of a boulder (well over 100' high.) I guess its size had been disguised by its distance, which, incidentally, was much further away than the "not so far away" that I had initially thought. Although returning a bit tired and slightly dehydrated, it was actually a lot of fun! In some of the previous posts I included a few shots of some of the things I saw along the way, including some of the desert shots, and the shot of the owl, and of the camels. 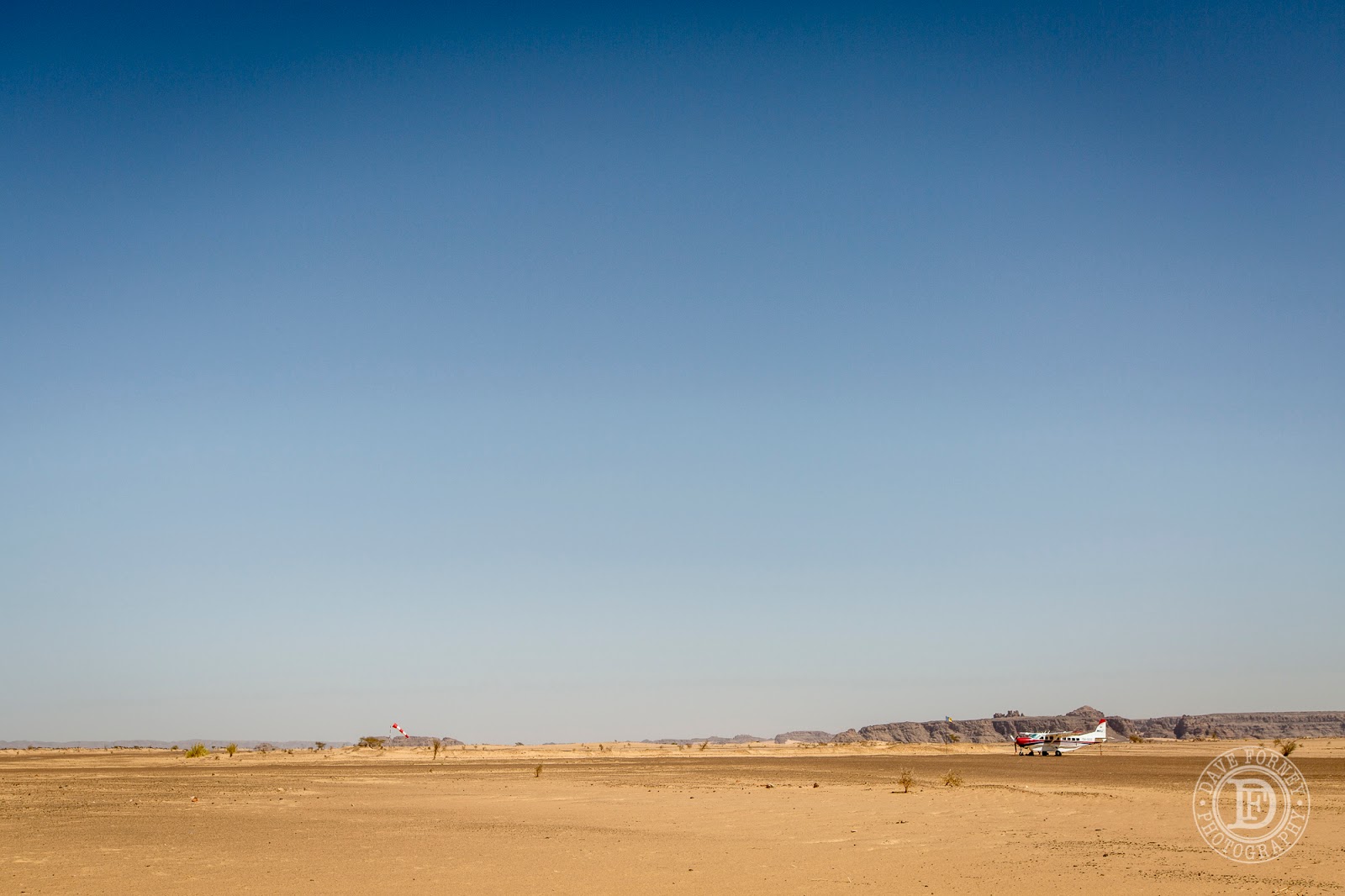 We also came across the remnants of a battle, which took place here against the Libyan forces in the 1980's. It's amazing how the dry heat of the desert preserves everything. 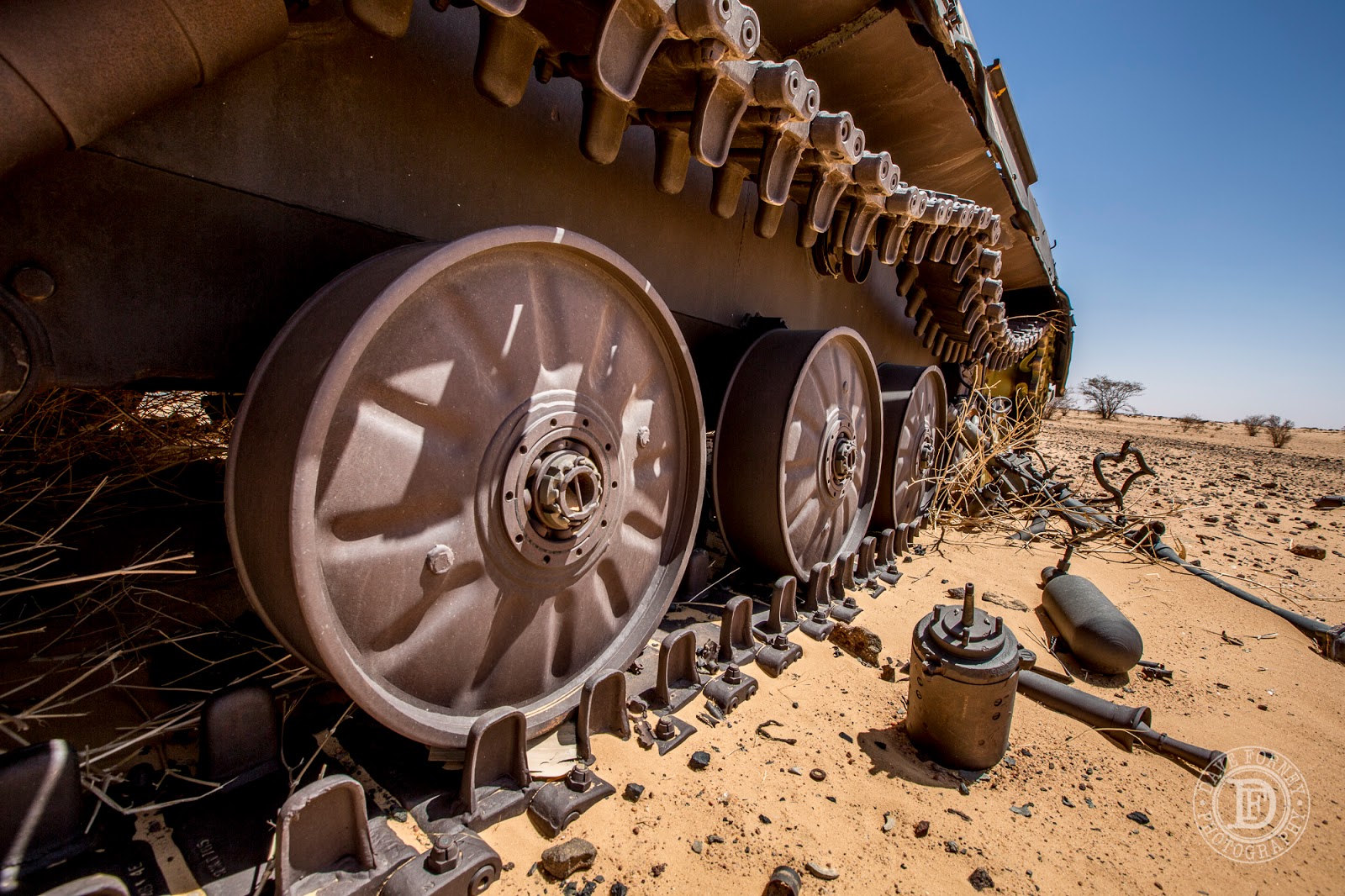 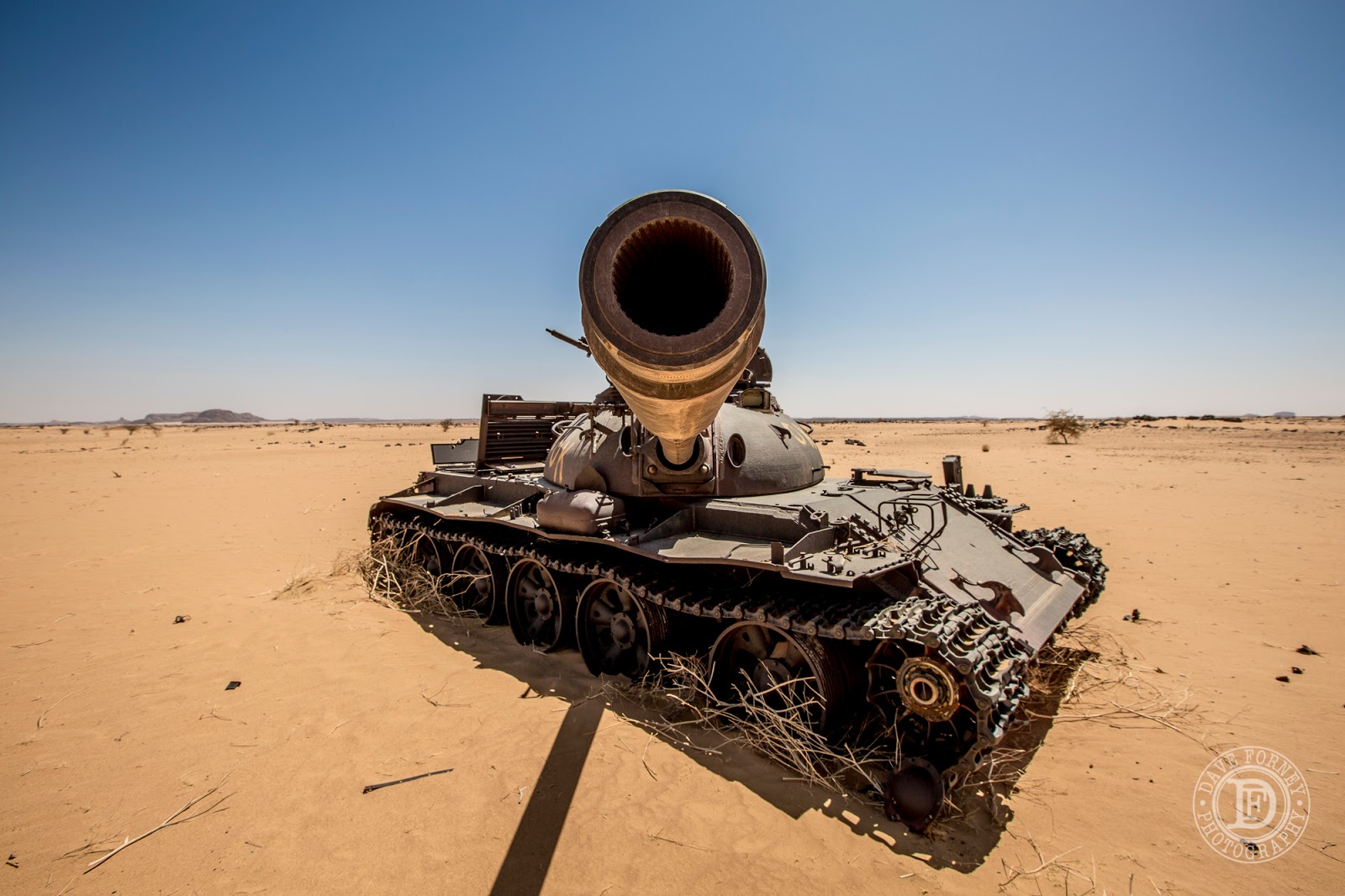 If you want to travel long distances here, and you don't have access to a tank, or an airplane, or a camel, and you don't want to walk, your alternate method of transportation across these seemingly endless sands, is probably going to be by 4x4 truck. Traveling by truck through the desert is not just a difficult adventure, it's often an arduous battle against the elements, and can quickly become a fight for survival. Here's a shot from thousands of feet above, as a truck ambles along the deceptively benign looking tracks, meandering through the desolate desert sands. 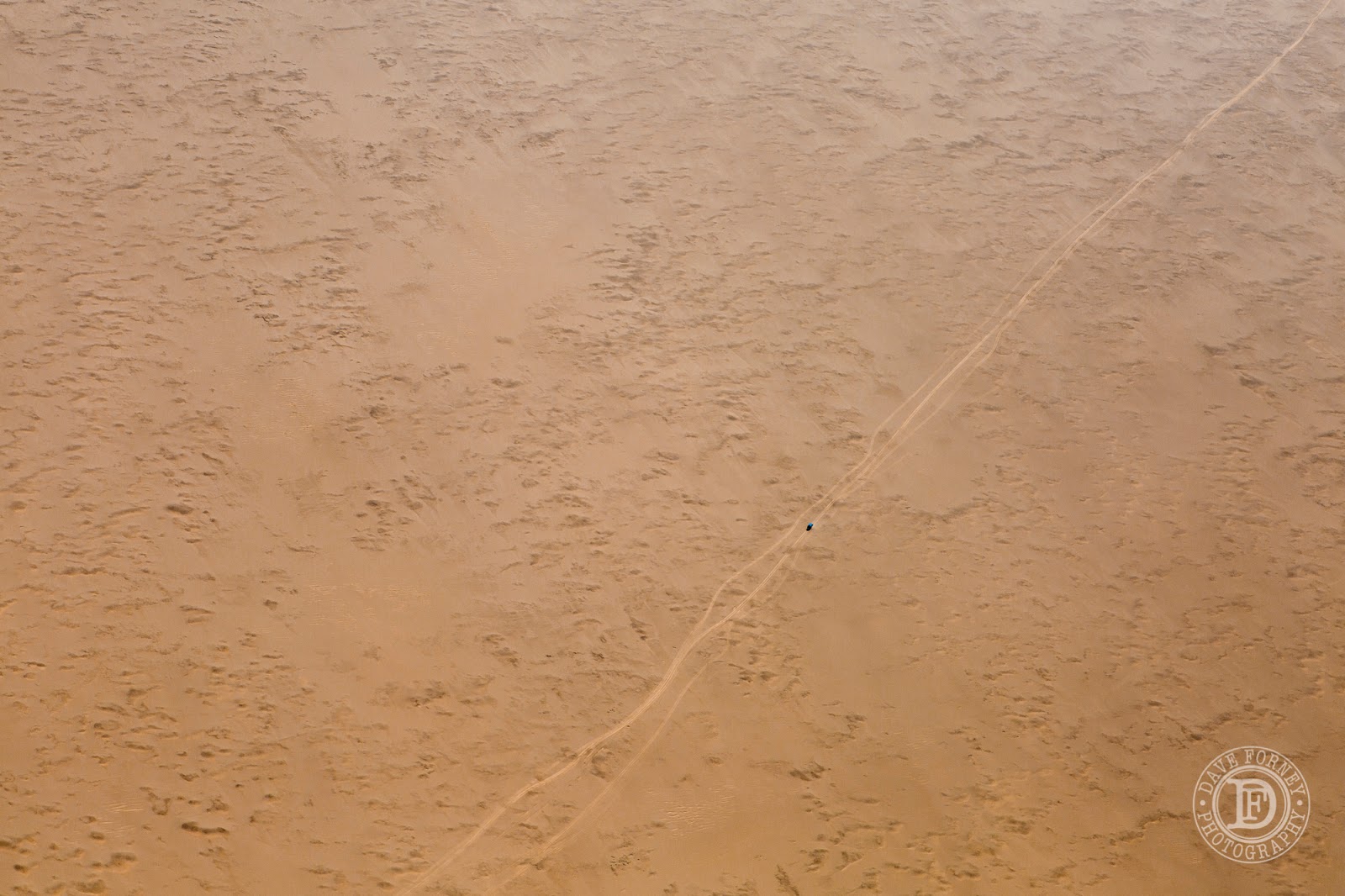 And here's another, showing the all-to-common outcome. In this case it appears the truck followed the wrong tracks, or perhaps the sands shifted and the tracks changed. The sands are constantly changing with the blowing winds, so the path is constantly changing too. If you zoom in, you can see the people, appearing as tiny ants surrounding the truck, which is hopelessly stuck in a deep sand dune. Imagine digging and pushing and working for hours under the scorching sun, only to get stuck again a few minutes or hours later. And again. And again. That's what it's like to travel by vehicle through this desert. The trip by 4x4 truck from the capital city to the oasis town (where I was flying when I took this photo) can take between five to nine days depending on the conditions and the vehicle and its loading. The MAF flight takes only a few, comfortable hours, and is infinitely safer. 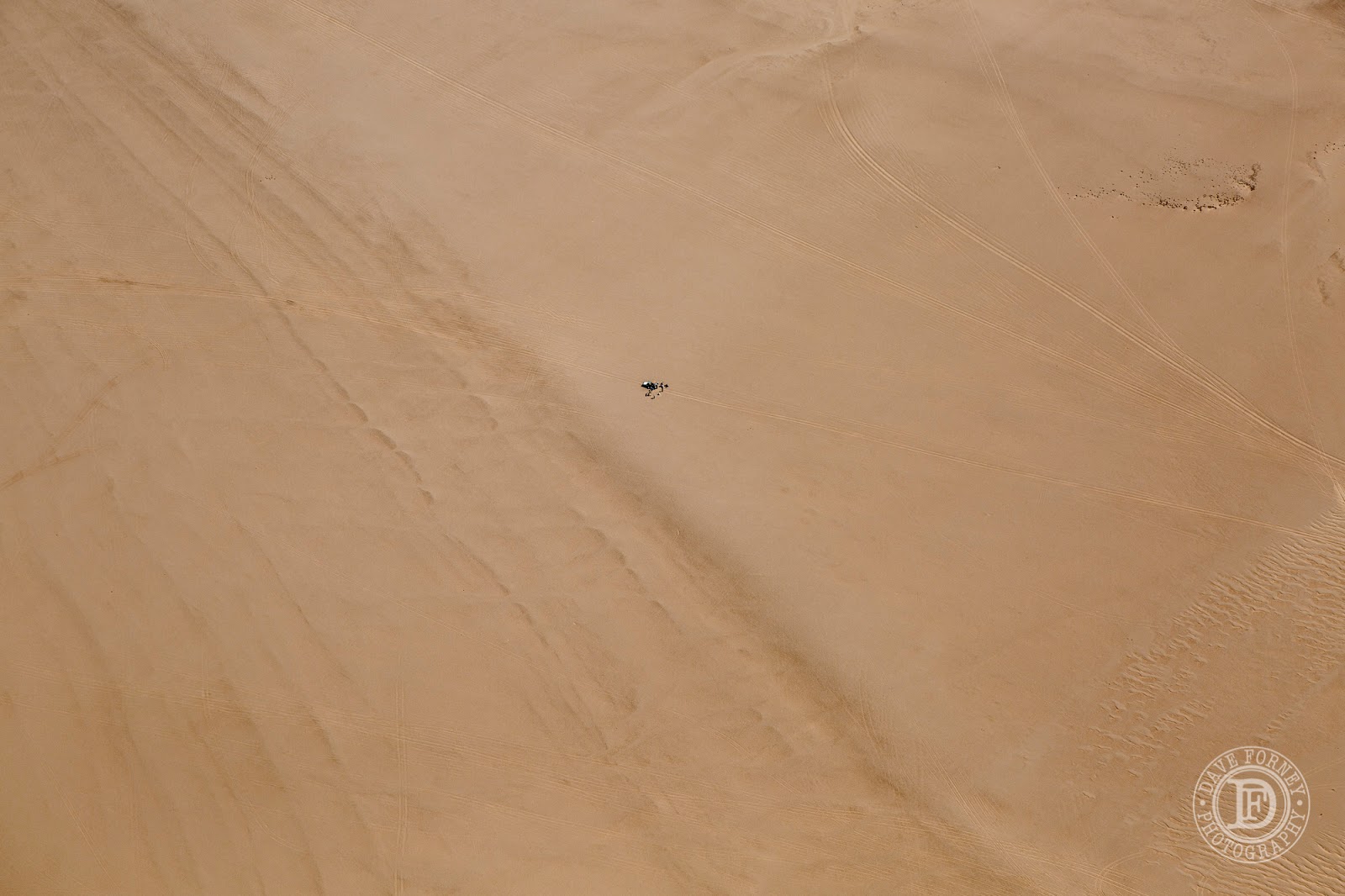 I mentioned above that the sands are constantly blowing and shifting. Here is a picture of a typical, small, remote village. You can see how the sands and dunes blow right through the village, and around the structures. Do you see the trees at the top of the picture? Those are date palms, which are very common wherever there is a water source, and people. 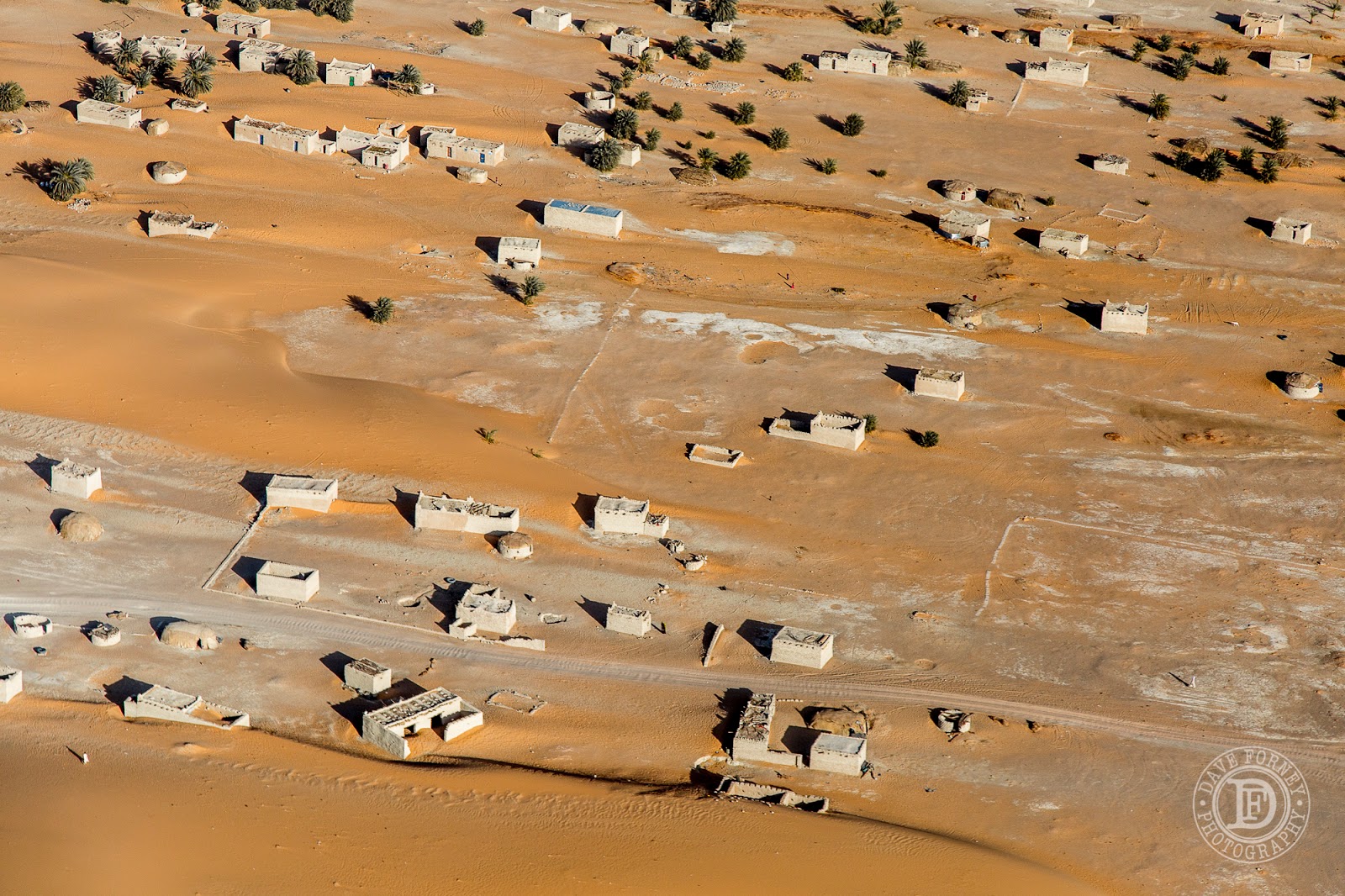 Here's a closer shot of the dates. I had never seen dates on a tree before. They were everywhere in the little villages and oasis towns. From what I came to gather, this region is famous for the quality of their dates. I can attest to the fact that they were delicious! 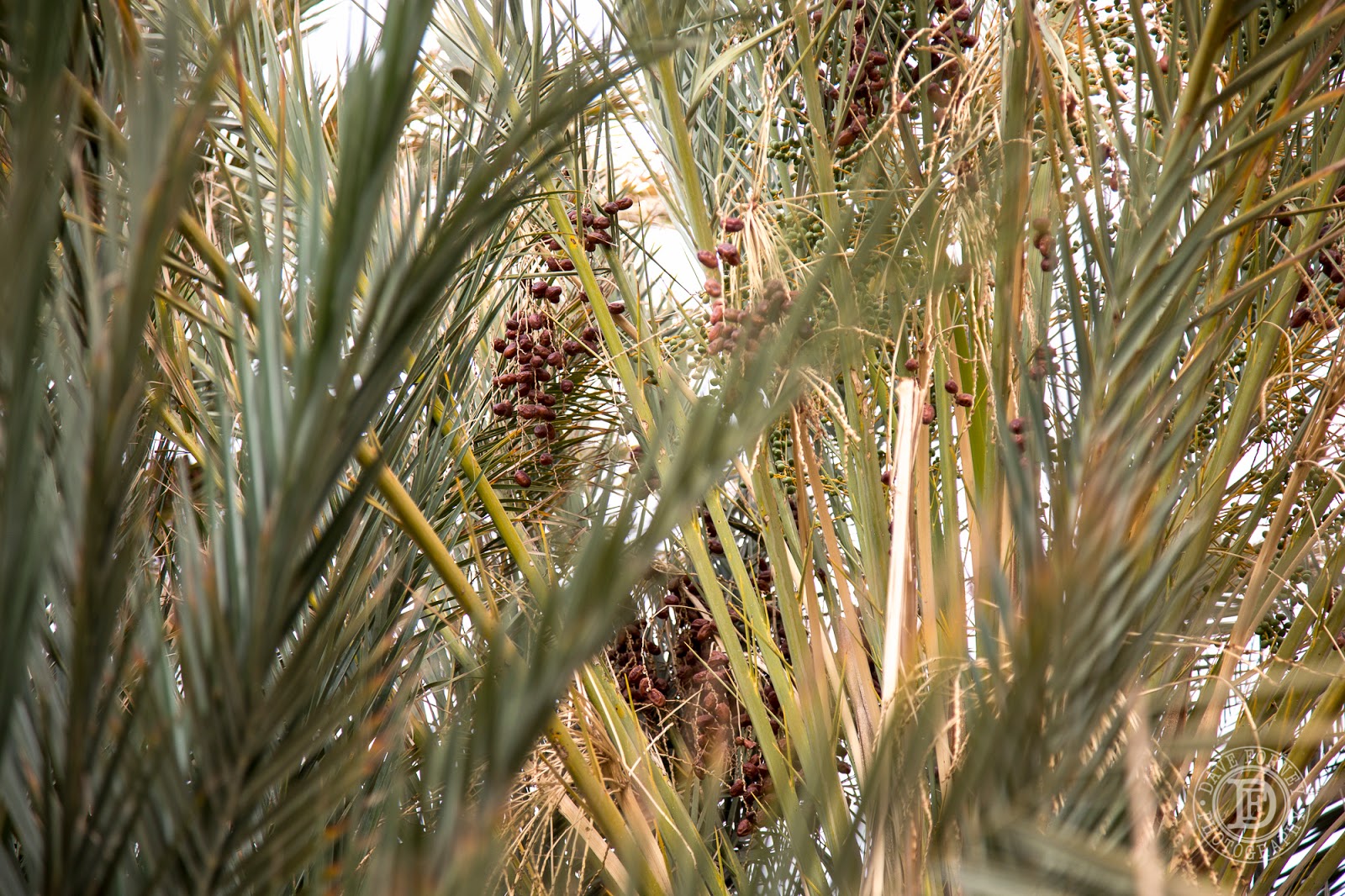 Over time, the sands can completely overtake a village, forcing the people to move their houses. Here's an example. As I've said so many times previously, life in the desert is difficult and unforgiving. But there are many people who call these places home. And there are those who have relocated to work and minister among these peoples. And they rely on MAF for their transportation. 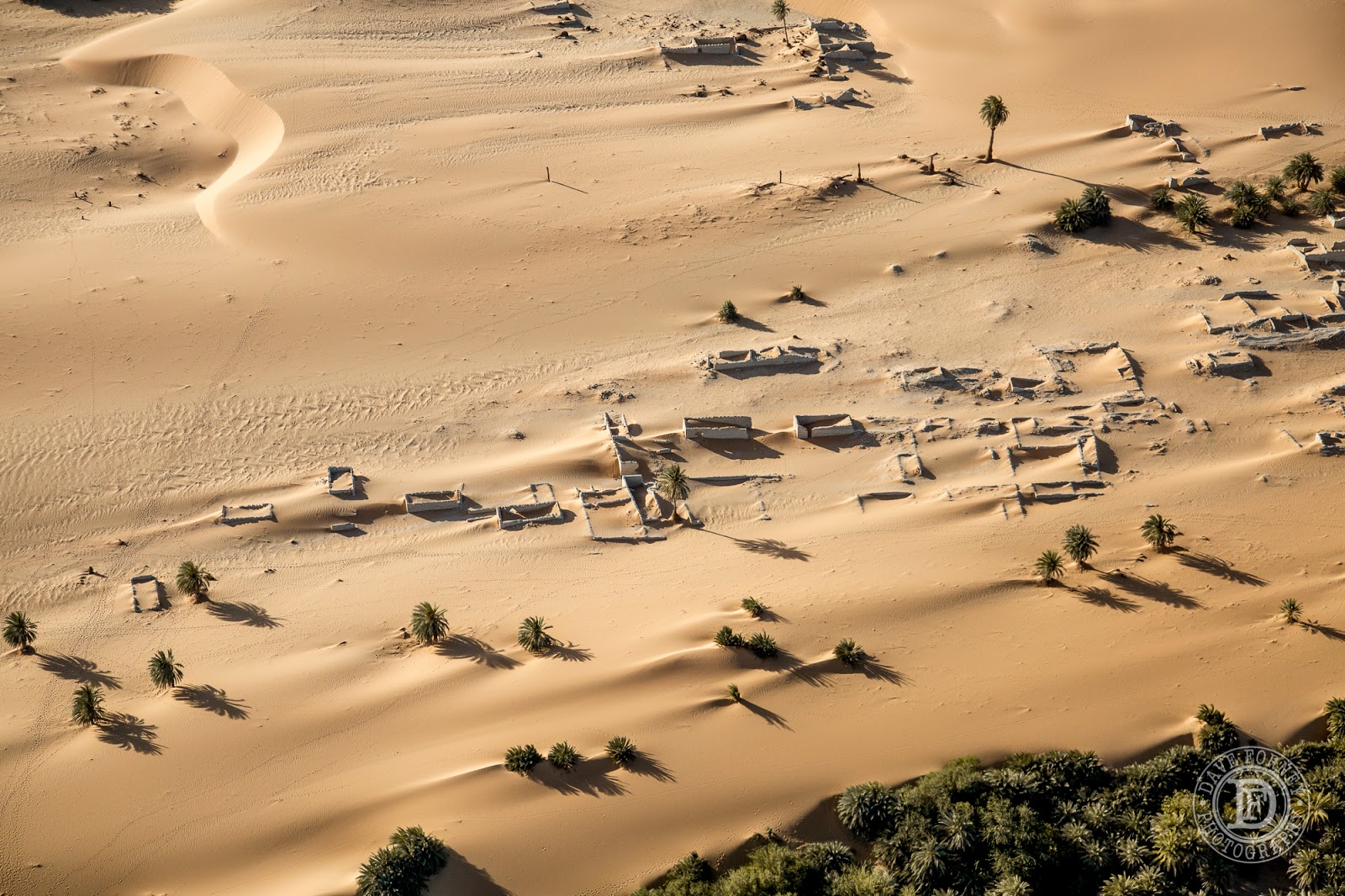 I hope you've enjoyed my posts on Chad. I was privileged to be able to spend a short time there flying with MAF, where I got to meet some wonderful people who are doing some incredible ministries and works in some very difficult and remote places.
Posted by Dave at 1:38 PM

Awesome stuff Dave - NGQP ( <-- National Geographic Quality Photos ! You see, I've said it so often it's just going to be easier from now on to have an acronym to work with!) and a very interesting perspective (literally).

Reflecting now on heat, dust (sand) and aeroplane engines. I know the planes I fly really don't like hot days. But I guess all the equipment you work with is fit-for-purpose, and designed or altered to be as safe as possible for the conditions you're in most of the time.

Always enjoy your posts and your angle on things!
Ali