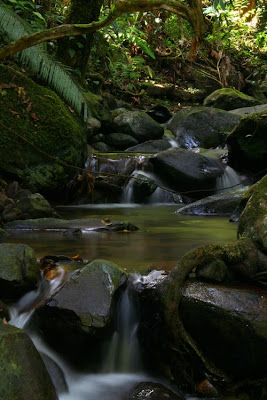 Hope you're not getting bored with the retelling of our jungle adventure. Since we don't get to do stuff like this very often, (and certainly most folks never get the chance to do a trip like this,) it seems like it might be interesting for you as well. But if nothing else, I know the grandpas and grandmas like to see all the details. So here's part III.

We woke up Saturday morning at first light, with the sounds of the jungle all around, including the babbling brook that ran right beside our hammocks.

Already the cooking fire was going, and the ladies that had come along to prepare the food were hard at work. The hunting party the previous night had been successful, the guys bringing back a small deer and several small rodent-looking things. But since they were still being skinned and gutted, the pleasant, sizzling aroma drifting low on the smoke through the mist must be something else.

Indeed it was! Frogs! Lots of crispy, fried frogs, the result of our frog-hunting expedition the night before. I can't emphasize how small they were, especially after shriveling up in the hot campfire oil. I've never eaten the large bullfrogs that I've heard of in the southern U.S., but I'm pretty sure that you don't eat them the same way we did these. These were eaten whole...everything was pretty much the same crispy texture and flavor (bones, meat--what little there was, tendons, etc.) Actually, they were pretty good. Of course, just about anything cooked over a campfire in sizzling oil is good. Anyway, the one that Britton has in the picture below was the biggest one. The rest were all considerably smaller, with less "meat." 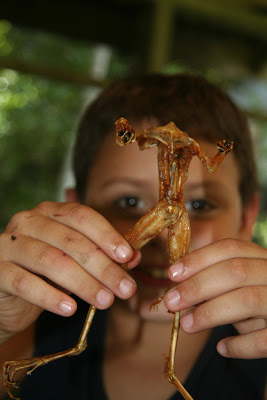 After breakfast we took off on a jungle hike with our guide. Britton was awesome, keeping up with the adults, despite the fact that we went up, up, up, and then up some more, as we climbed a spine ridge to one of the old transect areas that the scientists used to study here. In the picture below, We're on our way back down that same trail. 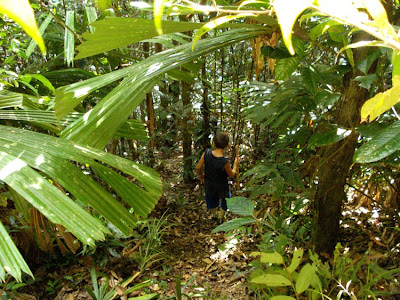 Our guide was fantastic. He pointed out all kinds of interesting things that the people use (or used to use in some cases,) for medicine and remedies of various sorts, building, weaving, painting, etc. etc. This is a certain kind of tree sap from a certain type of tree, that works particularly good for starting fires. I've seen it on the hike I did with Paul last year, and I've also tried it. It's quite amazing, being easy to light and burning steadily for a very long time. You could use it as a candle as well. I also learned that they use this (after melting it,) to help seal their canoes and boats. 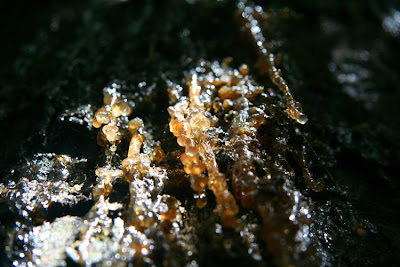 We saw quite a few of these trees (below,) covered in long (maybe 2 - 4 inches,) hard, strong needle-like thorns all the way up. It seemed like no matter what we saw, there was some use or purpose for that thing, according to our guide. 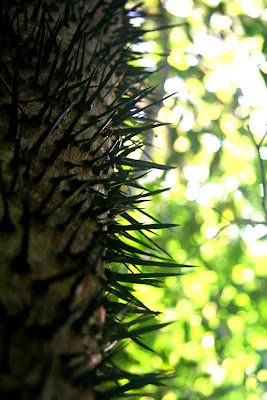 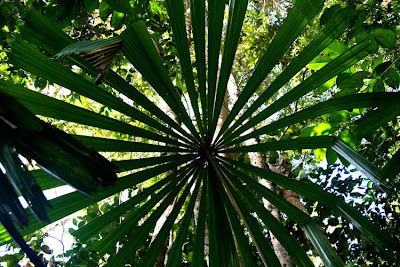 Occasionally when I'm flying over endless green broccoli, I see one tree that stands out because it's totally covered in bright red flowering blooms. Other times, I've seen trees that appear to be orange, or red, but rather than flowers it appears to be the leaves themselves. Well, I finally got to see one from the ground. It's true that there's no fall, winter or spring here. But trees still often go through the cycle of losing leaves and getting new ones. They don't do it all at the same time though, and most of them don't turn colorful. But there's a few that do, and it's funny how right here in the middle of the hot and steamy Borneo jungle, if you just looked up at this one tree, you could almost think you're on the Appalachian trail in the Northeast U.S. in October. 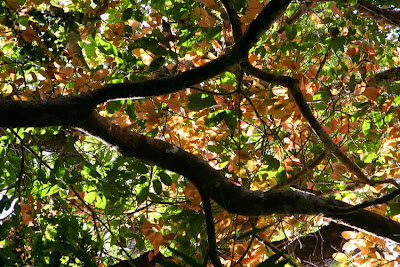 Speaking of dried leaves, when we turned our gaze down, there was just as much to see there. Insects were busily going about their lives all around our feet. One of Britton's favorites were these giant ants. They were HUGE--close to an inch long. 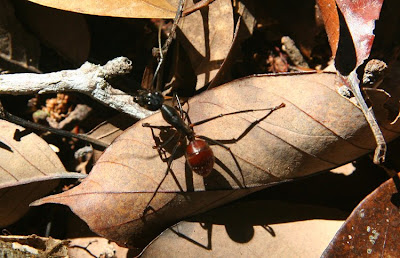 After hearing the unique call of Gibbon monkeys for some time, we finally spotted them overhead in the canopy. It was an extra special treat for Britton, since he so badly wanted to see some "wild" monkeys. I wasn't able to get a picture of them, b/c they are fast, and stealthy, and my main focus was on getting Britton a chance to see them. But you can use your imagination, or look them up on Wikipedia here if you're interested. 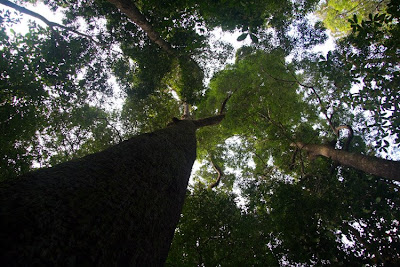 The hike was well worth it, and we came back both tired and energized in time for lunch. 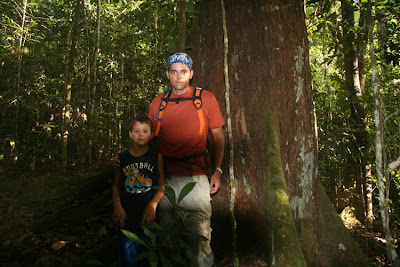 After lunch we went swimming in the small river (Sungai Enggeng) that passed by the research station. It's full of big rocks, but also offered "pooled" areas that were fairly deep. The banks were natural, undisturbed jungle, so it really had the feel of being out in the middle of nowhere. We also did some more vine-swinging (check out the video at the bottom.) 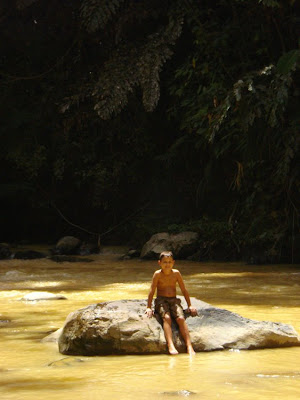 As for critters in the water, (something that my mom already asked about,) yeah, there were some. There's a lot of snakes around, but we didn't see one till the next morning (I'll have a picture in the last post about our trip.) They did catch this big eel right here in the same area where we were swimming later that night. Since they didn't have time to cook it before we left, they sent it home with us in the plane. 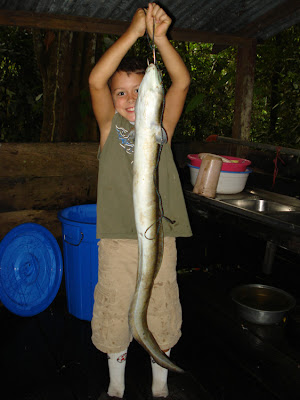 And of course the thick foliage-covered banks of the Enggeng river were teaming with insects and critters. Britton managed to rescue a praying mantas that was floating down the rapids, almost certain fish bait. 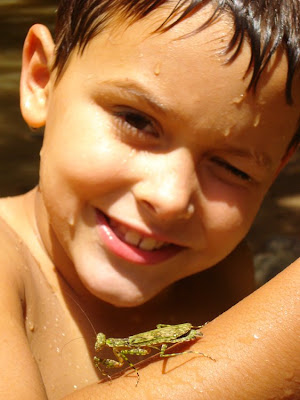 After placing him on a leave, the mantis hung out for quite some time, drying his wings before flying away. We were told later that there are some varieties here that are poisonous. Glad this wasn't one of them! 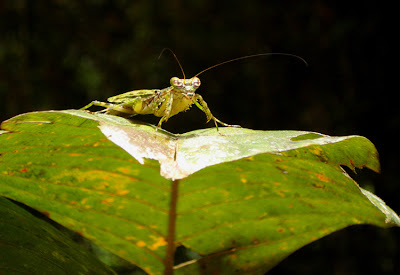 That night, Pak Anyi (Mr. Anyi) who is an elder in the village of Long Alango and had helped arrange the trip for us, had a ceremony to "adopt" Britton as his son. We all gathered around before eating supper, and he said some words, before giving Britton a special hat, and pronouncing him "Lawai Anyi" (a son always takes his father's first name as his second name--so in our case, follwing their tradition, Britton's name in English would be Britton David, my name would be David Carl, and my dad would be Carl John, and so on.)
Pak Anyi already has 12 children of his own, ten of whom are already married. He proudly informed us that he has a child married to just about every "suku" (people group) in the area, with the exception of two, the Punan (might have the spelling wrong, but these are the famous "jungle" people that still live totally out in the bush,) and a Westerner. Then he emphasized that he'd REALLY like to have a daughter of his marry a Westerner. He immediately followed up that statement by mentioning that he had specifically brought along his second-to-youngest daughter, so that she and Britton could meet. "Granted, they're a little young," he said, "but I thought they could begin to get to know each other now." We were all laughing about it...but I think he was actually sort of serious.
In any case, it's official, Britton is forever known as "Lawai" now in that area, and he is always welcome back as family. Pak Anyi was particularly impressed with how "strong" Britton was, and how interested in all the animals, insects, and jungle. Suffice to say, as I translated what Pak Anyi was telling Britton, I conveniently forgot to translate the part about how he was essentially trying to arrange a future marriage for him. Besides, I'm not even sure if I could afford the dowry! :) 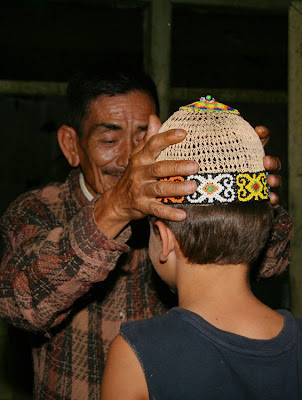 That night, and after hunting and finding another scorpion, as well as a HUGE, poisonous centipede, we collapsed and slept soundly in our hammocks under the jungle canopy. 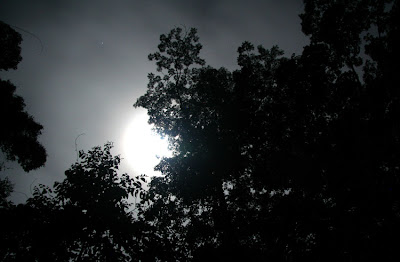 Tarzan! from Dave Forney on Vimeo.
Posted by Dave at 3:42 AM

Keep them coming - I'm enjoying them a lot!
~Jenn

That is awesome!! Loved reading and seeing what you did. What an amazing adventure for both of you. Thanks for the post.

new to your blog and really enjoying it!! looks like your having an adventure of a lifetime! P.S.- im a friend of your sister Anne!!

The adventures we had in the jungles of Brazil pale in comparison to yours. Nevertheless, they are precious memories of time with you and it is also precious to me to see you are doing the same with your son and my grandson. Great post.

Wow Dave... You took some amazing photos! What adventures you and Britton have had... I am speechless!