Alan Becomes Co-Pilot for a Day! 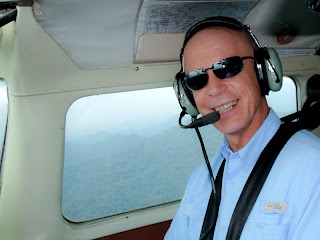 Yesterday my father in law, Alan, was able to ride along with me on a full flight day in Northeast Kalimantan.  Obviously I've had the privilege of carrying many different people and things over the past few years.  But this was the first time Alan has ever flown with me--and just like last year when my dad had the chance to come along--there's something extra fun and special about showing your family first-hand, what you're out here doing...and why.  Stories, blog posts, and video only go so far.  At some point you have to experience it first hand.  I really enjoyed having Alan along.  As for his opinion...well, I think the smile says it all, but you can ask him directly if you wish.  I don't think I scared him too badly. :)

After flying 30 minutes from Tarakan to Malinau (our major hub-town interior) we loaded up with a group of government workers and flew an hour and a quarter over some of the most rugged and remote jungles on earth, to land in the village of Mahak Baru, pictured below.  It had rained a lot the night before, so Alan got the full feel of water and mud flying up over the windscreen and wings as we were slipping and sliding safely to a stop. 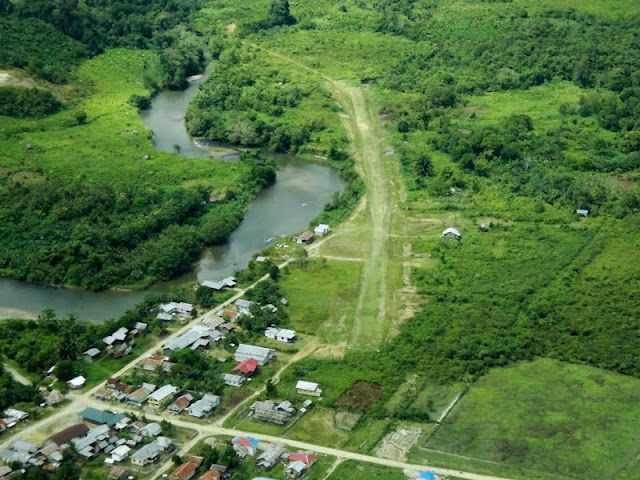 Many of you saw the "All Over the World" video that we shared last year on furlough.  Well, the last Indonesian person to speak at the end of that video was Pak Taman Bang, thanking YOU for making it possible for MAF to serve him and the people of his village.  Yesterday Alan got to meet Taman Bang personally.  I had previously mentioned to him that Alan is the lead pastor of one of the churches that plays a significant role in allowing us to be here.  Because Taman Bang understands how important that role is, he was very excited to to meet and greet my father-in-law.  Taman Bang is a dear Christian man that helps MAF immensely in Mahak Baru--arranging loads, weighing people and stuff, preparing tickets and manifests, helping to fuel/de-fuel the airplane etc. etc.  Taman Bang and his sister Tinan Kule also make it a habit to almost always greet the pilots with hot coffee or tea, and a packet of fried rice and/or fresh, juicy, sweet pineapple (the sweetest, juiciest pineapple in the world!)  Yesterday was no exception as Alan got to experience the love and generosity of a people who don't need to be able to speak his language to communicate clearly their appreciation for him coming along and seeing the ministry of MAF. 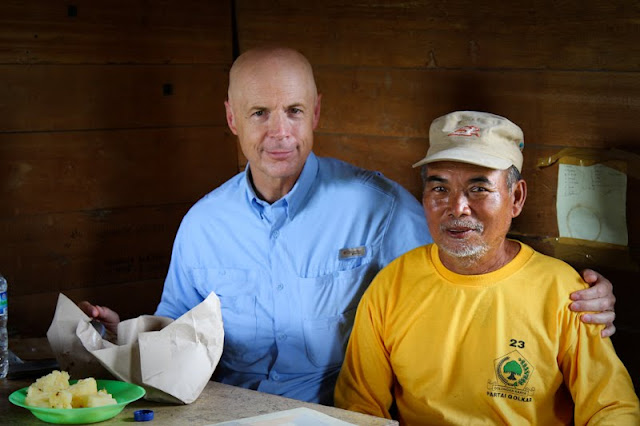 From Mahak we hopped 15 minutes over to Long Sule, perched on the top of a small plateau above the village.  To walk between these villages would take about 4 to 6 days. 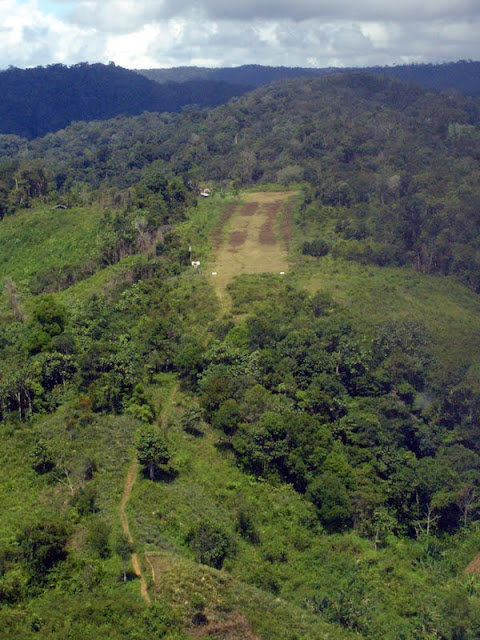 The people of Long Sule had also heard that Alan was coming, and they were equally excited to see him. 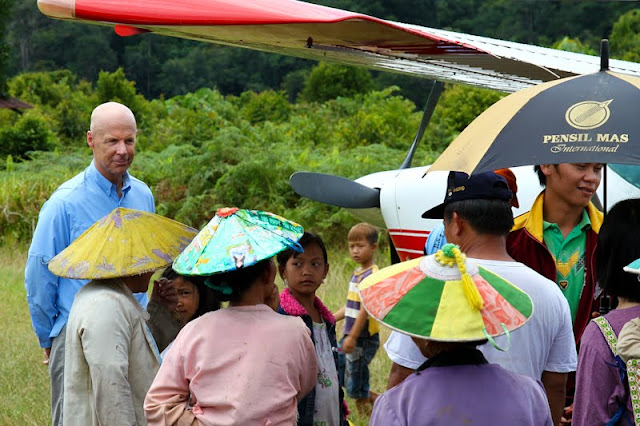 Two of the local pastors were excited to have a picture taken with Alan, hoping that he'll carry the image back to his congregation and thank them for the role that they play in the ministry of MAF.  Most of the pastors that serve in the remote village churches in Kalimantan are essentially national missionaries in their own country.  In most cases, they are from far away places, having been trained and prepared at a Bible School or Seminary, they are then sent out by their congregation for several years at a time to shepherd and/or plant a village church.  They often go many years without seeing their family or hearing their own native tongue spoken by others.  It's humbling to see their heart and dedication to serving people, and how little it takes (speaking of material goods) to keep them going.  They are far more efficient and effective than most western missionaries could ever be in similar circumstances.  However, they make it clear time and again that they would not be able to serve in this capacity without the help of MAF.  And that's why we're here!  Routine flights that we take these pastors on from one village to another--15 minutes, 30 minutes, or an hour--would take weeks or even months to do the old fashioned way.  It's a real privilege to partner with Godly men and women in such a critical way! 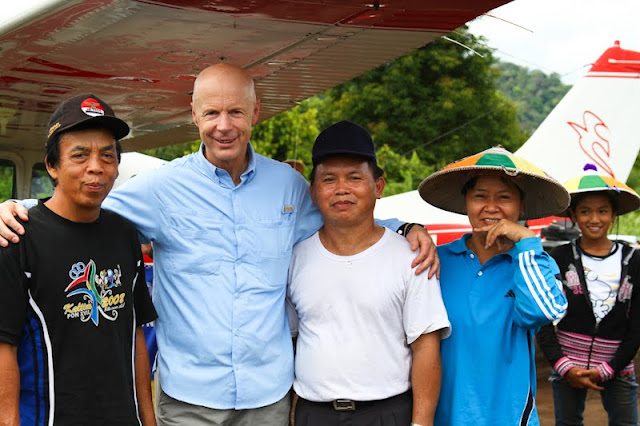 On our way back to Malinau we hit a wall of smoke.  Two days ago, people near Malinau started burning their ladangs (fields), making way for a new crop of rice.  It usually begins in August or September.  Every day that we don't get widespread rain, it gets worse.  So yesterday it was already getting pretty bad.   Look at the picture and imagine flying directly into the smoke.  If your instinct is to quickly suck in a gulp of air and hold your breath...well, that's a good instinct.  Just hope you can hold it for the next 20 minutes or so.  Good luck! 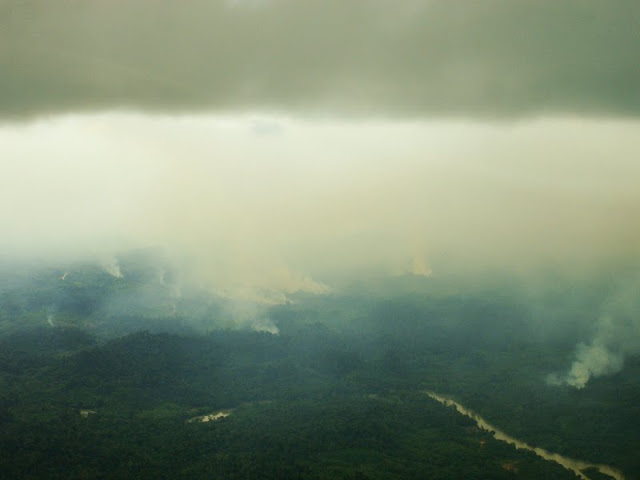 Upon arriving in Malinau, we found out our plans had changed.  There was great concern about some sort of quickly spreading sickness in the village of Long Alango.  Earlier in the morning everyone was fine there, but already by 1:30 in the afternoon, over 50 people were sick with severe vomiting and diarrhea.  People in the village had used the HF radio to call out to the hospital for help.  So we loaded up with two doctors and a nurse, along with several hundred pounds of medicine and made our way back through the smoke to the beautiful area of Long Alango, just visible at the bottom of the picture below.  The very short and marginal landing strip is located on the right side of the river, two bends up to the north. 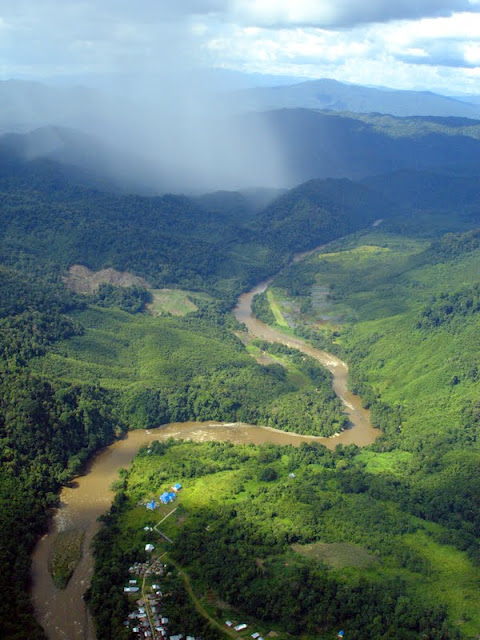 Long Alango is a tight strip!  Any rain or unusual winds can/should cause a pilot to abort a landing here. In fact, a few weeks ago I was turned back four times in one week trying to land at Alango because of wet conditions.  It's just too short and slippery to maintain safe margins under those conditions.  Fortunately the weather cooperated yesterday.  Although there were nearby rain showers, the strip was dry, and the sky was even smoke-free in this area. 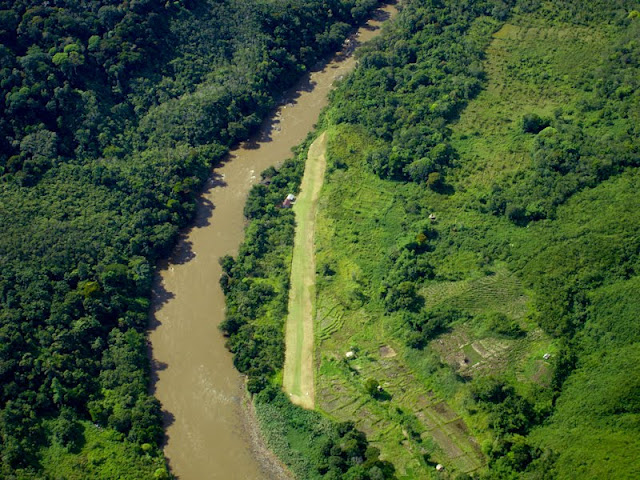 Landing from the North makes for a very exciting approach--especially for someone who's never been here before.  The approach path has you following the river in, unable to see the runway till turning onto a very short final, and descending closer and closer to the trees and hills on both sides.  Because of benchmark altitudes and key positions along the path, it's actually very safe, but needs to be flown very precisely, especially if you're landing at gross weight as we were yesterday. 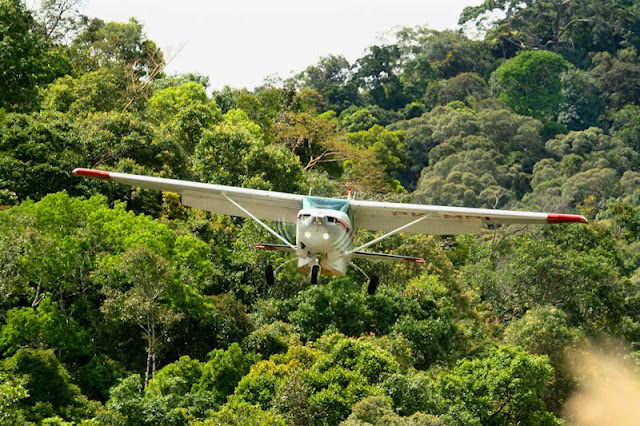 Once again, the local pastor was there to greet Alan--in this case Pendeta (Pastor) Yah Yah.  I can't overemphasize what a Godly and encouraging man Pendata Yah Yah is.  I've had the opportunity to spend the night at his house several times, and I can tell you that he not only cares deeply for the people of Long Alango and surrounding villages, but also for the pilots and their families who serve with MAF. In fact, just last week he came to the airstrip to ask me for a list of prayer requests so that he and his congregation could have a special time of prayer for each MAF family and the ministry of MAF.  It's humbling!

Well, this time Yah Yah showed a concern and worry that I've never seen in him before.  He asked me and the MAF family to pray specifically for his village and the unknown sickness that is sweeping through it.  Many people had gathered in Alango from surrounding villages to celebrate Indonesia's Independence day on August 17th.  They concluded their celebrations on Wednesday night.  Thursday morning people began getting sick.  By the time we got there about 3:00 Thursday afternoon, more than 50 people were sick and the number was quickly increasing.  Already one child had died.  The sick were being quarantined in a large building.  Officially, they do not know what the sickness is, though a friend of mine in the village mentioned Cholera.  It fits the apparent symptoms, but I don't know what the actual diagnosis will be.  The bottom line is, they need prayer.  Please pray for the medical team that we flew into Long Alango, that they would be able to quickly discern the cause for and treat the disease or sickness that has stricken so many.  And pray that somehow through this ordeal, that God's name would be glorified! 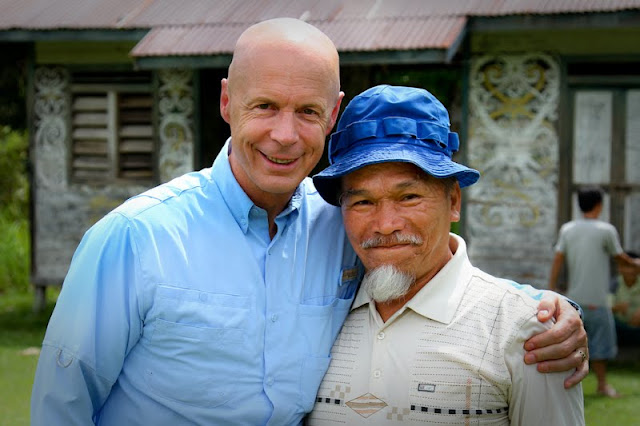 This was/is a remarkable example of the reason that MAF is here.  Within hours of a desperate call for help from this remote village, we were able to deliver a medical team with supplies directly to their location.  There is no other operator here that can land in Long Alango.  Without MAF, help would have taken days to reach Alango by river.  Perhaps for many that would be too late.

In other news, our plan was to pack everyone into a 206 and fly to PaUpan to spend the night tonight.  They were really looking forward to us coming.  We were too.  We were going to hang out with our friends there, have a church service tonight, show a film, etc. etc.  Unfortunately, our kids have been taking turns battling a stomach bug all week, so we had to cancel that trip.  We'll re-schedule soon, but it'll be after Alan and Theda are gone.  However, on Saturday, I will be taking Alan, Britton and Hudson out to a village near Long Bawan, where we'll be doing essentially the same thing.  Please pray that we are able to make that happen--that we don't get sick before hand, and that the weather and equipment cooperate.  I'll post more on that after the fact.
Posted by Dave at 5:48 AM

Praying! God bless y'all with MAF and all those Indonesian pastors and churches!

Amazing!! Simply amazing! Thanks for showing how God is obviously using MAF. Thanks for your skills! (Waiting to see alan "take the wheel." I'm sure you cn train him quickly)