On Wednesday Britton finished up our busy summer birthday season turning exactly one decade old.  As usual, he got to choose the foods for each meal (in this case waffles for breakfast, egg sandwiches for lunch, and chicken pot pie for supper.)  Joy made him a multi-layered ice-cream cake as per his wishes. 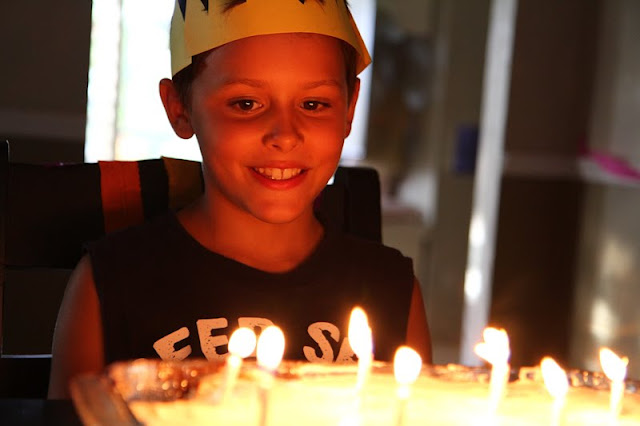 We had a little family party Wednesday night, but in lieu of a big birthday bash, he really just wanted to spend an entire day exploring in the jungle with his friends.  So Friday night he had CJ and Carter over to spend the night and then... 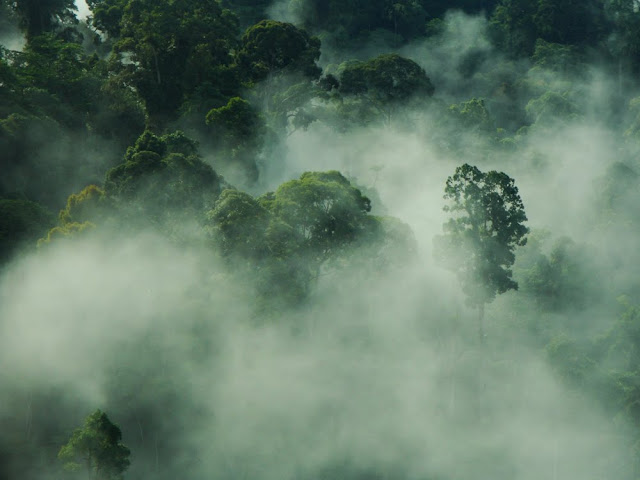 ...on Saturday I took the three musketeers into the Tarakan jungle for a hot, sweaty day of vine-swinging, stream-walking, snake-catching, bug-collecting, muggy, hot, sweaty fun! 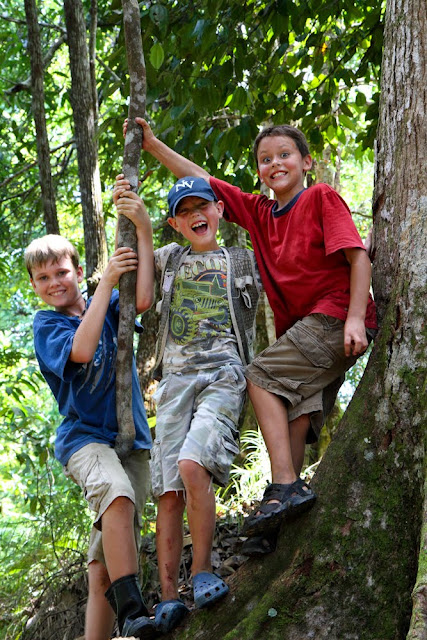 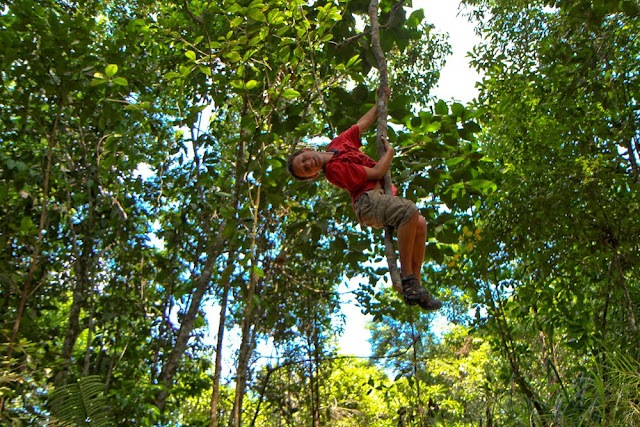 You can rest assured there were eyes looking in all directions, under and over and around all the leaves and rocks, trying to find interesting critters and creatures! 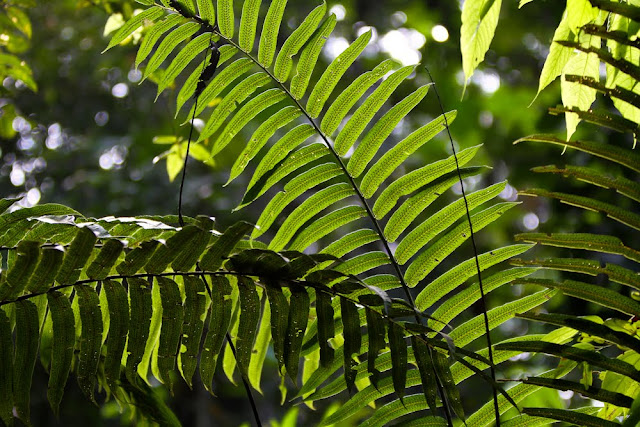 The first big "catch" of the day was a painted bronze back snake.  Carter quickly identified it and caught the little guy, while Britton fished the Snake identification book out of his backpack so they could read all about it.  After oohing and awing over how gorgeous she was for a while, and admiring how calm she'd become, they released her back into the creak to go on her way, beaming from ear to ear--the boys that is, not the snake. 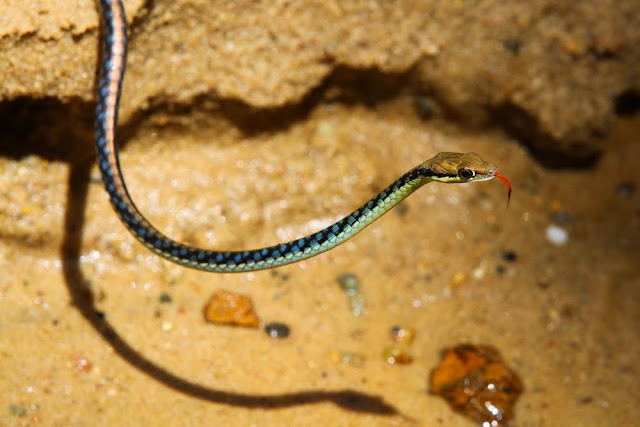 BIG!  That's the best way to describe this wood spider!  This was one of several we came across, but this one in particular nearly gave me a heart attack.  The boys would most likely have walked right underneath it without even noticing had I not yelled "stop!"  I, on the other hand, would have no doubt planted my face right right into the middle of those long, evil, grizzly legs and chompers, if I hadn't looked up just in the nick of time!  Her "net", (the females are the huge ones, the males are tiny), was strung directly across the center of the stream, in a perfect location to catch a meal...or me!  Seriously, this thing was big enough to pick ear wax out of both of your ears simultaneously with it's longest legs, while simultaneously chomping on your schnoz with it's devilish mandibles!  Supposedly these aren't "very" venomous to humans.  But I mean come on, a spider that size???  I'm not about to find out!  Can you tell I'm not real fond of spiders? 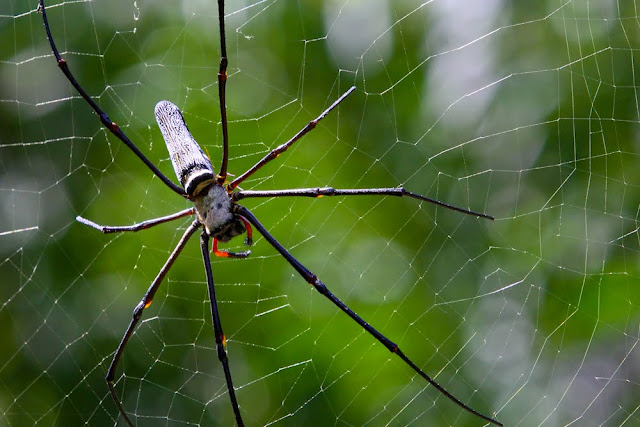 Of course, that's not the only bug or insect we saw.  Any time you're in the jungle, you literally see hundreds of bugs.  This was a HUGE wasp of some kind.  Keep in mind, I don't have a macro lens (yet), so to be able to get a picture this large, the bug has to be pretty hefty.  This beast was probably quite nearly an inch and a half long, and did not seem to be worried by how close I was. 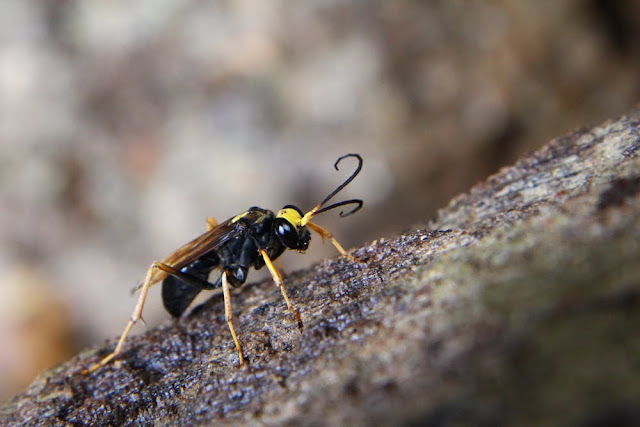 And of course, we saw a ton of awe-inspiring plants of every kind, including the famous pitcher plants.  If you look closely you can see how the "pitcher" is attached to the overhanging leaf with a small "umbilical cord".   When it catches a fly or insect in it's water trap, the nutrients from the digesting bug are taken up this cord into the leaf to feed the plant.  Wild stuff! 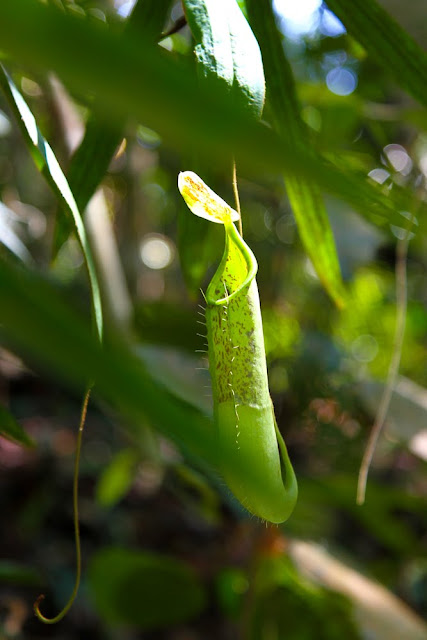 Well, it was a looong, but good day.  The boys seemed to have a blast, and I heard reports that all slept very well that night!  Note the bloodied, bruised shins and sweat-soaked shirts.  They were proud of their "battle wounds!" 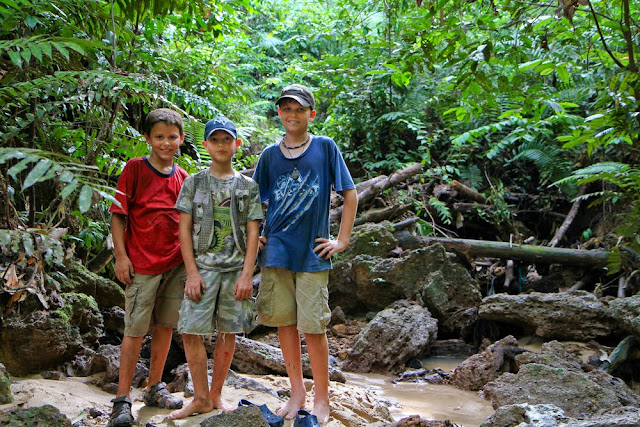 Ten years went by fast! Looks like he had a great birthday - tell Britton Happy (belated) Birthday from us! Oh, and on a personal note, thanks for talking ABOUT the snake BEFORE showing the picture. Warnings are always good. ;-)

I put that warning in there just for you, Carrie. If I ever post frog pictures, I'll be sure to give a warning to Peter! I'll tell Britton Happy Birthday from you guys.

Funny! We have a "birthday season" too! We have 6 birthdays, and all 8 of our birthdays (plus an uncle and Grandma's) fall between January and July!

We have also had "birthday bashes," but ours was one big bash for the whole family!

Looks like your son had a blast! And you are a wonderful photographer!

Look at those beat-up legs! I love little boys! :)