Very early Thursday morning I had the privilege of seeing a full lunar eclipse.  I shot the first photo, below with a 200mm f/2.8 lens, and left it totally unedited to give you a good idea of what it really truly looked like.  No cropping, enhancing, enriching, sharpening etc. etc.  This is exactly what it looked like through the camera.  (I did convert the image from RAW to JPEG and reduce the image size and compress it some--as I do with all the photos on this blog--to speed the upload and viewing of them in this format.  But to fully appreciate these night time pictures you really need to see the original image on a high-def screen. Some of the stars and details are lost on these compressed images.) 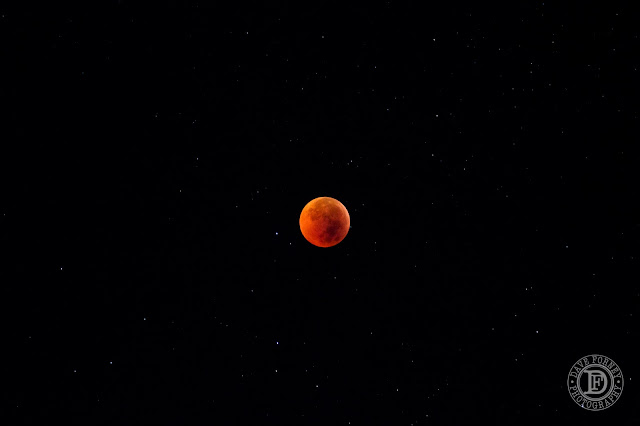 I got up just a little after 3am and headed up to Gunung Selatan, (South Mountain), which is little more than a sand hill a few hundred feet high that overlooks the downtown part of Tarakan.  There I sat for the next two and a half hours.  In this 15 second exposure at 10mm, (16mm full-frame equivalent), you can see the lights of downtown Tarakan lighting up the low clouds, and the red moon hovering above the reddish glow from the airport area. 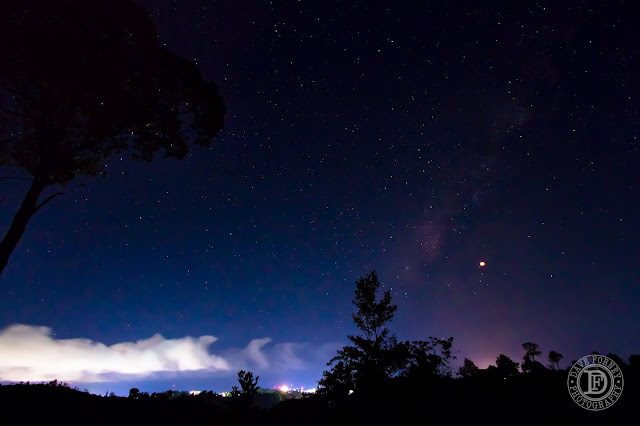 Here's a bit of a closer look at it.  The way I understand it, the earth is between the sun and the moon, and the moon enters the shadow of the earth.  When it's fully in the middle of earth's shadow, the light from the sun has to bend around the earth through the atmosphere to get to the moon.  That process weeds out most of the wavelengths, with the exception of the red light, thus the reddish color.  It's kind of a pain to photograph (at least with the equipment I have) because it's only reflecting a fraction of the light that a "normal" moon would be showing.  As such, it's difficult to get the exposure correct and still get satisfactory sharpness.  You can't use a slow shutter speed, b/c the moon is actually moving a lot more quickly than you think and it will blur the edges if the exposure is even one or two seconds long.  So without a super duper expensive telephoto lens that lets more light in, you're forced to increase the ISO settings pretty high, which results in some grain visible in the moon.  But you still get the idea. 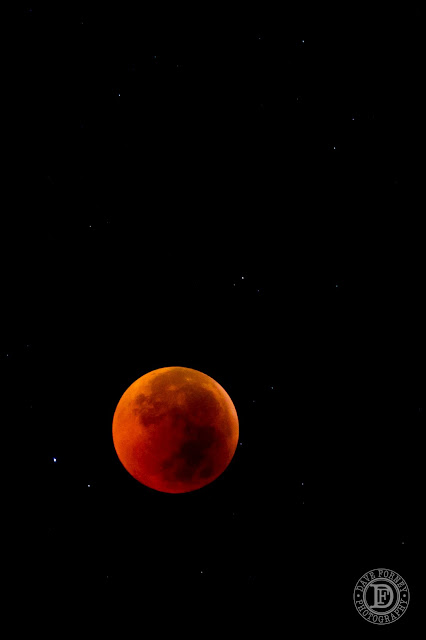 It stayed in the full eclipse state for about an hour and a half--the longest one in 11 years!  The below picture was taken just as it was starting to come out the other side of the shadow.  You can see that the top edge of the moon now has a brighter edge (from direct reflection of sunlight), while the lower edge is still in the shadow (and now appears darker because the exposure is set to be in the middle of the two extremes.  But even that little bit of reflected sunlight allowed me to use a lower ISO setting and longer lens to get more detail in the moon.  However, as it's now coming out of the shadow, much of the reddish color is fading in this shot. 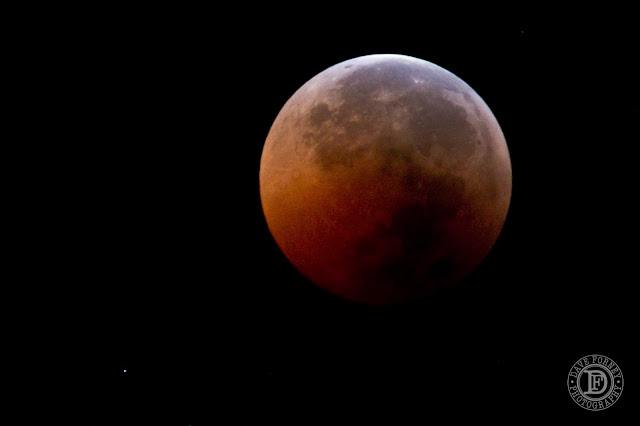 Now for a comparison.  This is a picture I took two days later at almost the same time of morning, but with a normal (no lunar eclipse) moon.  It's actually very bright under normal circumstances and needs to be shot using a manual exposure setup that will compensate for this.  In this picture you can really see some of the moons details--craters, lines etc.  What's interesting to me is that the moon appears to be black and white, although it's a color picture.  The moon is really fairly colorless, but only reflects the yellowish or reddish color when the light is bent through the atmosphere on it's way to the moon. 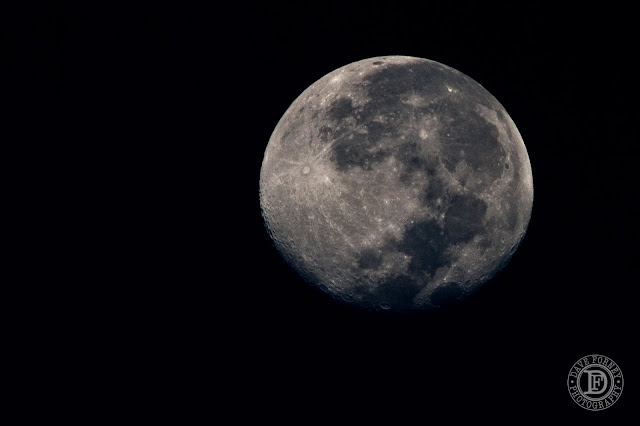 Back to the lunar eclipse now; this is about a quarter of the way through the exit of the moon from earth's shadow.  I exposed it to show the part of the moon that was out of the shadow, reflecting the sunlight.  By doing so, the rest of the moon appears to be gone.  Had I exposed it to show the part that was still in the shadow, the top quarter would have just looked like a bright, undefinable light.  I know I know, you're probably bored out of your mind with this, but I think it's pretty cool! 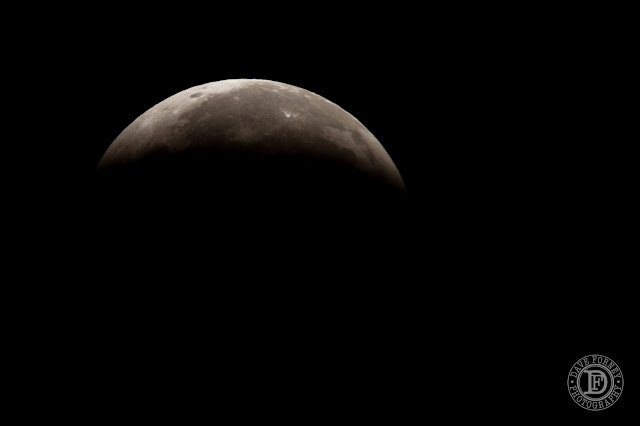 Finally, here's a picture of the stars from the top of my hill perch, during the middle of the lunar eclipse.  Because it was an unusually clear night (especially for the tropics, where there's usually haze in the sky) and because the moon was darkened, the stars were out in full force!  It was a gorgeous spectacle! 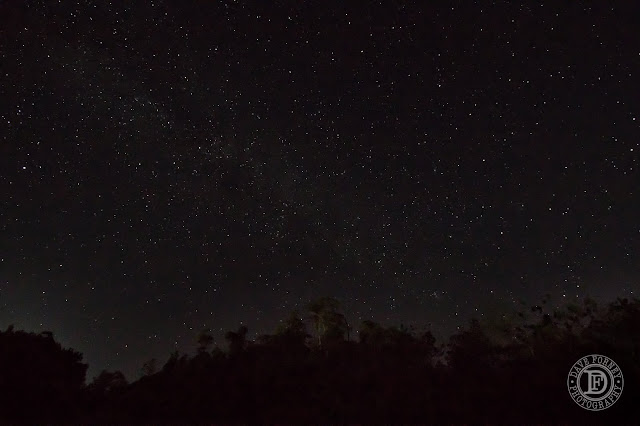 "When I consider your heavens, the work of your fingers, the moon and the stars, which you have set in place, what is man that you are mindful of him, the son of man that you care for him?" --Psalm 8: 3-4

Dave, these are AMAZING photos! Thank you so much for sharing. Your photography skills are so professional.

Awesome photos!! Any chance of getting a full-sized version of the first?

wow. those are gorgeous photos and excellent explanations. thanks

Oh my. "Author, Author"...praise is due Your Name.

Totally awesome. not boring at all. I am impressed with what God lets us see of His creation...and the skill He has given you to show it from the moon and stars to wee bugs and things.
Thank you for taking the time to share!
Sandy in the UK

In your free time you ought to give some online photography lessons!

By the way, my husband (who is also into astronomy) said that a few of your pictures you can see the Milky Way. Very cool!

Wow, Dave!! These are amazing. Thanks so much for sitting up all night to get them and share with us. God is so amazing to allow us to see some of His handiwork.

Very cool! Never seen one myself, so thanks for sharing. My dad worked on the space program, so I always love seeing moon shots. Blessings,

Your blog is amazing!. I came across it from a missionary pilot from SAM's blog.

You have amazing photography skills. Would love to know what kind of camera you are using and how much skill it takes to use it.

Reminded me of an article that CMI (Creation Ministries Int) did a while back.

Awesome Job, I appreciate the explanation of how you did it...

I'm not bored!! Just trying to pick my chin up off my laptop!! Those are jaw dropping photos!!!! The works of God's hands are wonderful! Who can fathom? Wish we could've seen that from the U.S.

Dave, I came across your blog from Kodiak Aircraft's website. We share several interests - in addition to a love for Jesus - like flying and photography, so I've added your RSS feed to my reader.

These eclipse photos are amazing! Such a great capture of just a small piece of God's creation. Thanks for sharing!