Killer Nose Disease and a Wedding

WARNING:  This first little story is more than a little gross and disgusting.  It's quite graphic, but funny.  If you don't do gross and disgusting then feel free to skip down to the first wedding picture.  It gets better from there on down.
This is Tanner's nose.  Last week Joy saw bloody stuff oozing out his right nostril.  And pus.  She put some medicine in there.  Next day it was worse.  And smelling bad too. We thought it was a staph infection so went and got some obat (medicine) at one of the local pharmacies (you don't need a prescription here for a lot of medicine if you know what it's called).  So for the next few days Joy faithfully applied topical medicine inside Tanner's infected nose, and made him swallow medicine.  It got worse, not better. 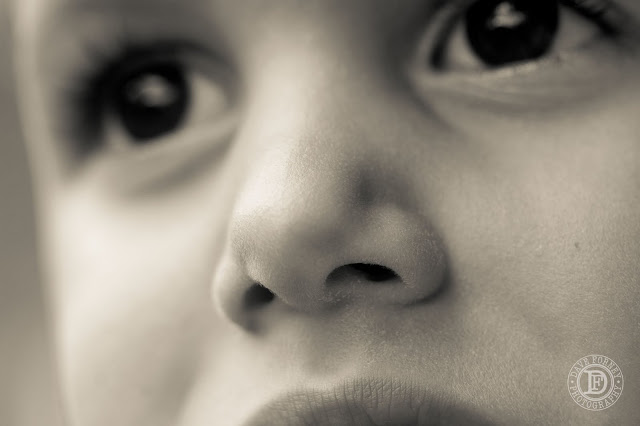 After I got home on Thursday I took a look inside that proboscis of his.  It looked awful!  Deep inside was a strange, spongy-looking, red fleshy growth of some kind, almost entirely closing off his nostril.  And it was obviously infected.  It was also causing him quite a bit of pain.  I had never seen anything like it, and after several days of antibiotics it didn't seem to be improving.  We decided to take him to the doctor.
The next day Joy took Tanner to the local Emergency Room.  The doctor there took a good look inside and was totally perplexed.  He told Joy that he'd never seen anything like it.  He had no idea what to do and told her she had to take him to the Ear Nose and Throat Specialist ASAP!  We didn't even know there was an ENT doctor in Tarakan.  So the next few hours were spent worrying and praying...what on earth could this horrific, bloody, pus-oozing, spongy-looking, tumor thing be, that's so impervious to direct antibiotics???   The worst possible scenarios played out in our minds.
That night while Joy was waiting in the long line to see the ENT, my cell phone rang.  It was Joy.  I expected news...was it good or bad?  "Tanner just told me that last week he bit off a piece of the red, foam, spongy-moose bath toy, and stuffed it up his nose.  He just remembered."  Ummmmmm, he did what????  Not that I would expect anything less from a little mischievous boy.  (You may remember his twin brother, Tyler's, episode with the coin last year?)  Well, a few minutes later and a simple pull from a pair of tweezers and all was well again.  So if you ever have a bad case of proboscis peniculus morbus (from the Latin meaning proboscis sponge disease--yeah, we named it ourselves)  try the ol' tweezers before you head off to the doc!
********************END OF GROSS STORY************************
In other news, Joy and one of her MAF friends, were asked to be in a wedding this week.  Their very good friend, Fatimah, asked them to accompany her in her best friend's wedding.  Fatimah is standing beside Joy on the left. 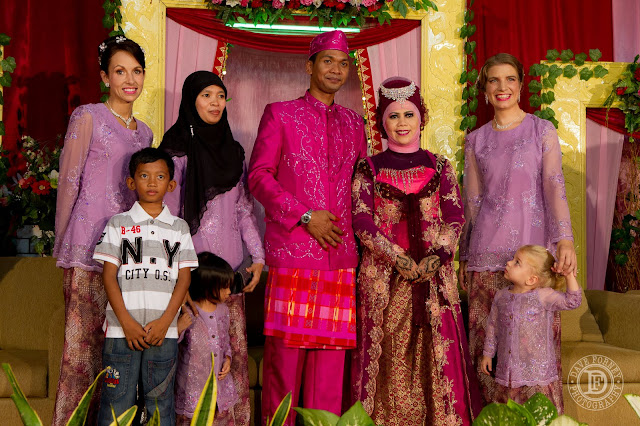 A few weeks before the wedding Joy and friend were taken to a penjahit (person who sews) who measured them and then made these beautiful traditional outfits. 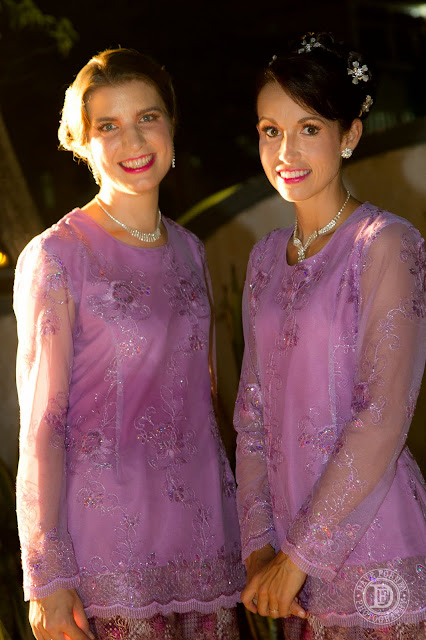 Outside the reception hall, there was plenty of activity and good food. 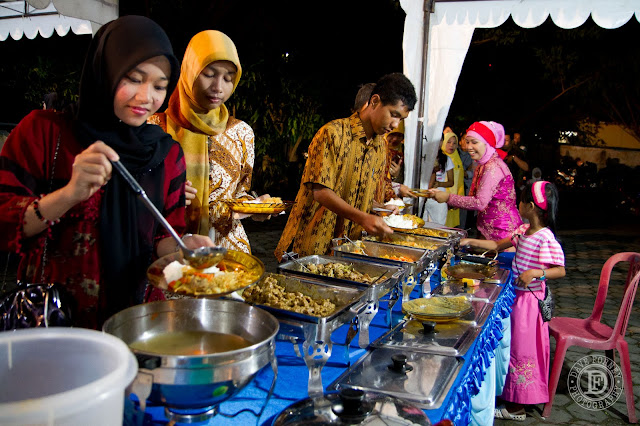 Nearby a guy was selling cheap, lighted toys.  They were blinking and whirring and swirling and generally sucking in children and their parents like black lights suck in bugs at night.  I'm not sure but I think the guy must have made a killing that night! 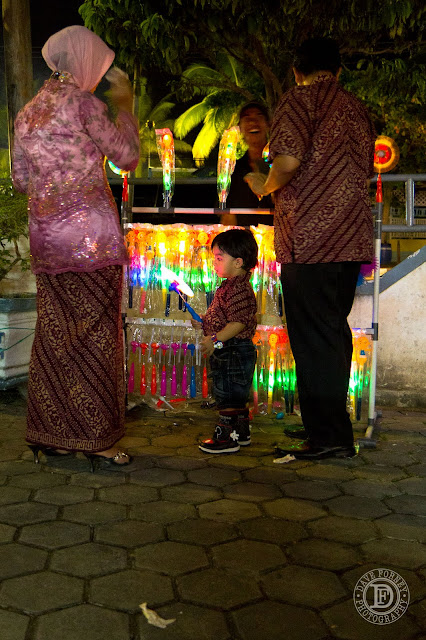 A few more random shots at the reception. 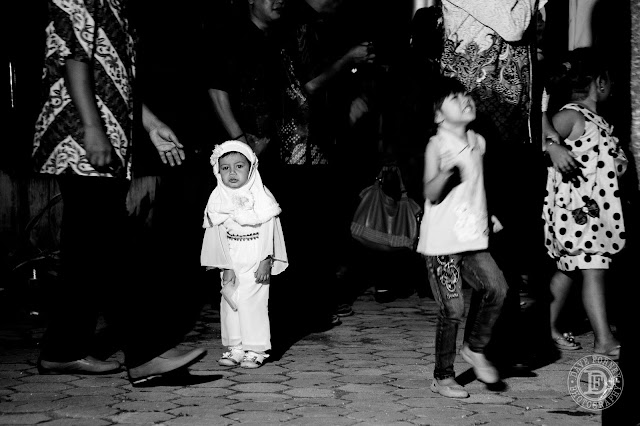 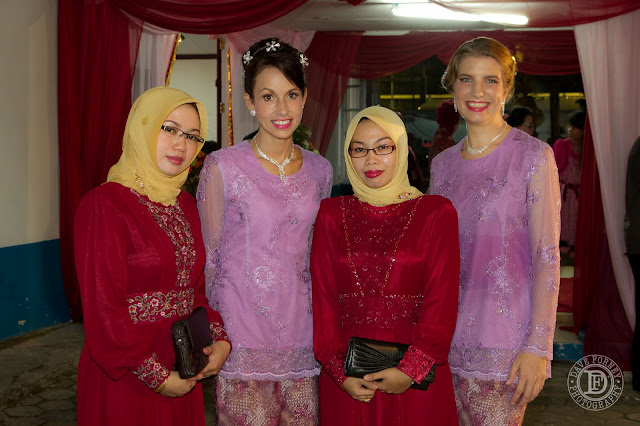 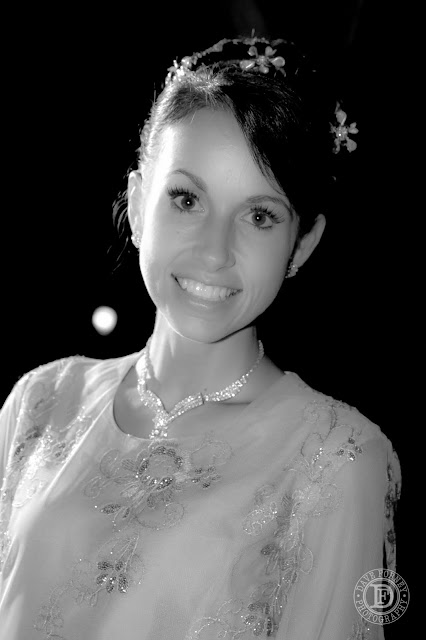 What do you think their favorite colors are? 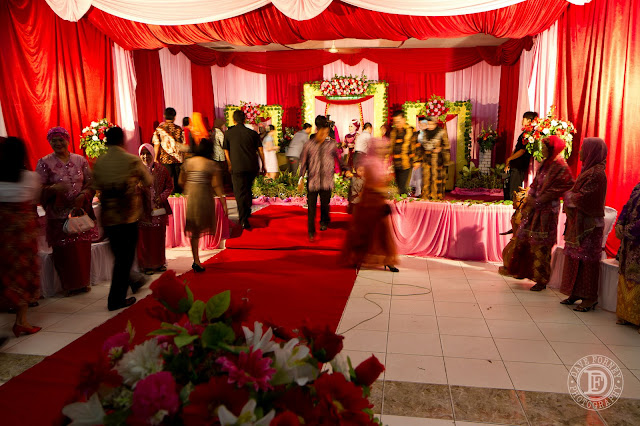 These ladies were singing and doing the Emcee thing, and doing quite a fine job if I do say so myself. 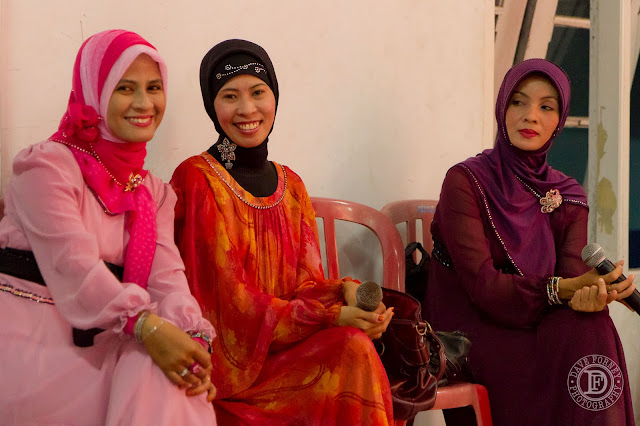 Well, there you have it.   A lot more happened this week, but alas, my time for posting is gone, so that's all you get for now.  Thanks for dropping by.
Posted by Dave at 2:41 PM

Email ThisBlogThis!Share to TwitterShare to FacebookShare to Pinterest
Labels: Friends And Neighbors, Funny Stuff, Our Kids

Wow, thanks for sharing the pics. I agree, Joy is Beautiful.
My, what kids can do to frustrate their parents...Hoping such never happens again! The wedding was unique to see! Thanks!

As I was reading the story of your son, I kind of thought he stuck something up there. I have a little boy, I know these things! What's that saying, "Boys will be boys!"

Your wife is so beautiful! I love the traditional outfits. Makes me want to go back to Southeast Asia so bad. Glad Tanner was ok!

Thanks for letting us in on some of the "nitty gritty" experiences as well as the "wow, how neat" times. We can pray better, knowing the scary as well as the delightful things.

My 4 yr old just had a trip to the emergency last week with a piece of lego up his nose...gotta love it! At least no crazy mis-diagnosis, I guess your situation certainly had a funny angle in retrospect, but I feel for you guys worrying for you kid!

I really enjoyed Joy's thestayathomemissionary blog! So glad I found yours! My boys love to read about your adventures! I have 3 boys...9,6,2 and my 6 year old got a pencil eraser stuck in his nose a few weeks ago! You just never know what little boys will do!!!

It was good of Tanner to remember before seeing the ENT, wasn't it? Our recent "nose episode" included a milk cow, not a little boy, so we didn't get much help from her!
Great stories! Never a dull moment, I am sure!

We've had similar experiences with our little ones, so my first guess was that he has stuck something up his nose! Ha! So gross. :)

The wedding outfits are beautiful. Good to see Joy - I really miss her blog; hope she is blessed!

We pull your family name out of our "pray" cup about once a month... thanks for sharing the adventures.

For Joy: Also, how neat that you get to go to all these fun weddings. And those smashing Indonesian clothes! Do you re-use those pretty flowy outfits over again for other occasions? If you used them in the States you would make quite a wonderful impression with them--one of a kind outfits!

I like the wedding portrait and how the little blond girl looks mesmerized as she gazes at the bride! a thousand words

Th wedding almost perfect except the child who suffer nose disease,how pity one. :(