Derawan is a very small island not far off the coast of Borneo in the South Celebes Sea--home to an Indonesian fishing village of about 800, and numerous food stalls and penginapans (sleeping places) like the one pictured below.  The population there means a little less peace and quiet (and a little more trash) than is found on several of the surrounding, uninhabited islands.  However it also means cheap food and places to stay.  To see other scenery pics from previous Derwan trips go here.   To see some of the people on the island go here.

Because of the overcast skies I wasn't able to get any good underwater photos this time.  But if you want to see what it normally looks like underwater, check out a some of the pictures I took on previous trips of a few of the critters here, and the corals here, 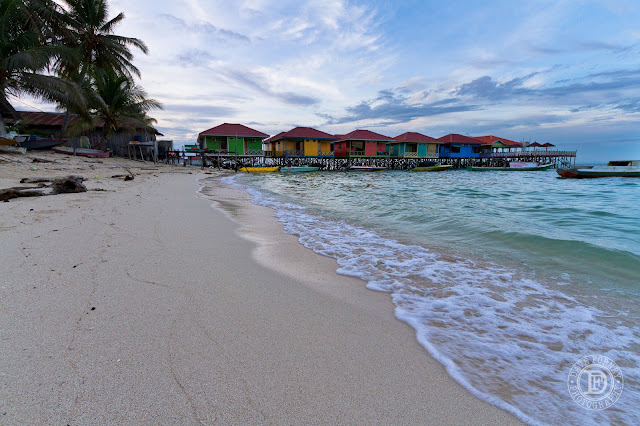 To get there we took a speed boat directly from Tarakan.  There are other ways to do it, but if you put together a large enough group and split the costs, this is definitely the best way to go.  Joy and several of the other wives were not at all looking forward to this part of the trip--something about small boat, large ocean, tidal waves, sharks, etc. etc.  I talked it all up about how great it would be--no big deal, it's like a Sunday afternoon drive in the Appalachian mountains.  But b/c of the ugly weather, I proved to be a fool.  We got into some wild rain and wind and we all got soaked and...well, it just wasn't the best part of the trip.  This shot was taken before we hit the weather. 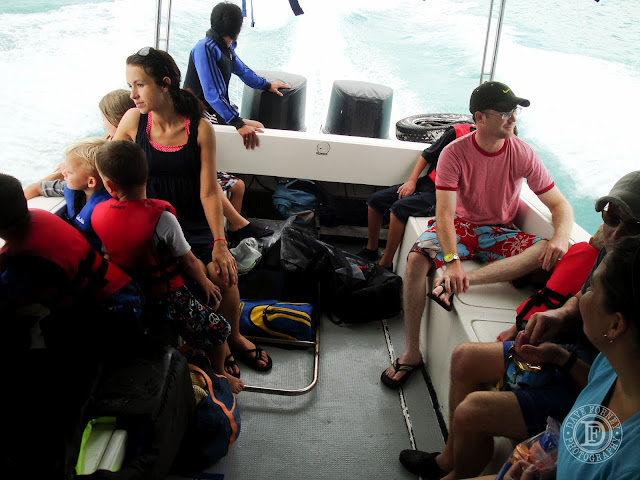 Here's a view from the front porch of the place where we stayed.  Normally, it's a beautiful scene out into the ocean.  This picture pretty much captures the ambiance during most of our time there--overcast with anything from drizzle to pounding rain!  Note to self: next time check if there's a typhoon in the area BEFORE planning island getaway. 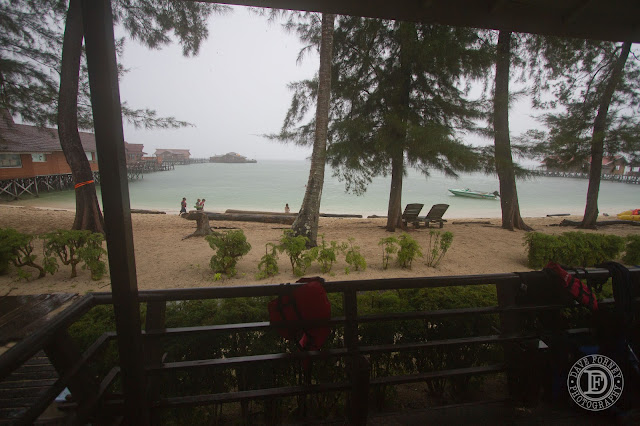 Again, rather than beautiful blue skies and shimmering sees, this was the scene. 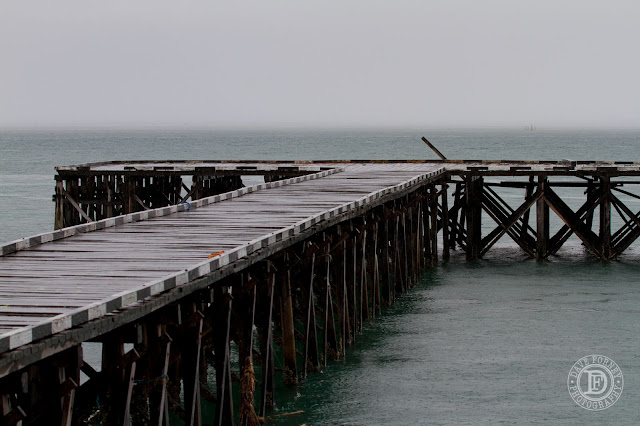 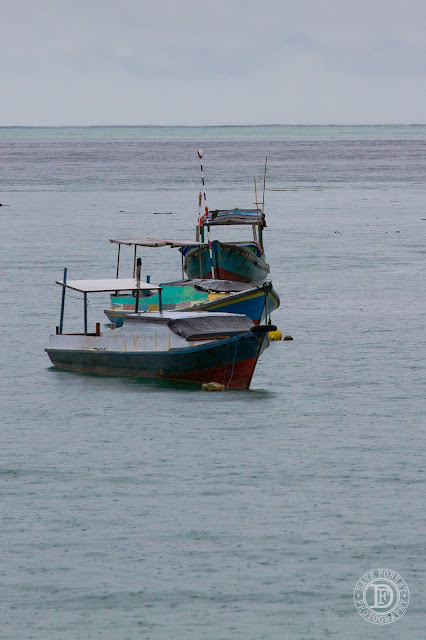 But a little rain in the tropics will never kill the fun for a bunch of energetic kids on an adventure.  Our good friends and neighbors, the College's were along as well, and their kids and ours played for hours on the rain-soaked beach and in the water. 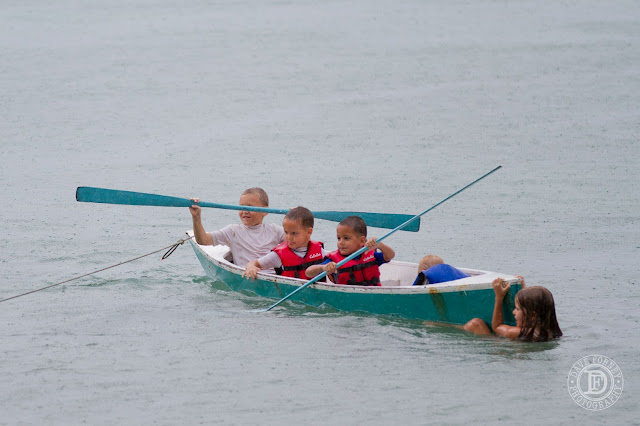 One of their favorite things was to wrangle large drift logs--trying to float on top of them and use them as boats and whatnot. 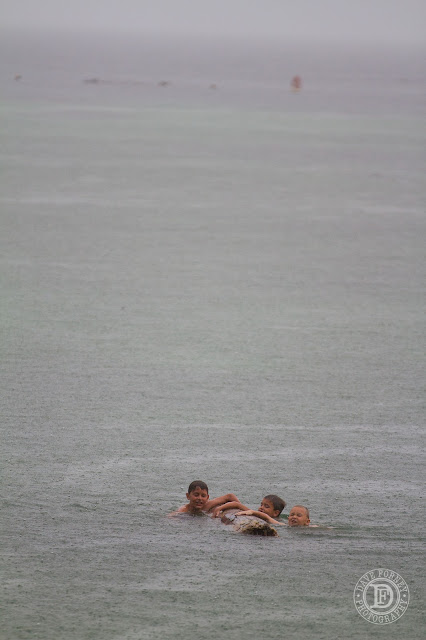 The second day was a sinister--stormy looking day, and several of our team opted to stay in the comforts of the cottages.  But the rest of us ventured a trip to nearby Kakaban.  It's one of only two places in the world that has a captive, lake-type environment with an ecosystem like this.  Kakaban is a purely volcanic island that rises straight up out of the inky, dark, blue-black depths.  Surrounding the island is a very narrow band of some of the most amazing coral reef you'll see anywhere in the world, and hundreds of different species of fish and marine life.  These are some of the most diverse marine waters in the world.  But what truly makes Kakaban unique is the lake.  Inside the volcanic crater is a lake that is neither fully fresh, nor fully salty.  It's a mixture of both.  And inside this lake are millions of jellyfish--of which there are four species.  Outside, in the ocean, these same jellyfish would provide a painful sting, or even death.  But inside the lake they have lost their ability and/or need to sting.  The result is an other-worldly experience as you swim among myriad jellyfish--translucent and pulsating hypnotically in every direction.  Anywhere you turn they are there, and you can touch them and hold them and it's very bizarre.  The kids absolutely love it!  This is the little jetty at Kakaban lake, from which you can peer or jump into the water to enjoy the jellyfish. 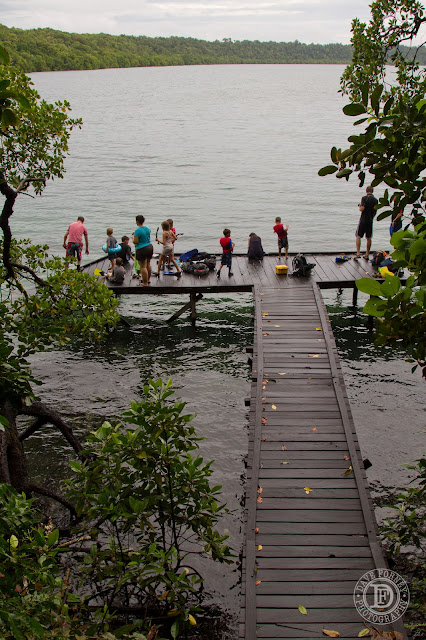 A view of the very narrow beach on Kakaban.  Indeed, large sections of the island have no beach at all, but simply jagged, slippery lumps of lava rock, as sharp as shards of broken glass, that fall away straight into the ocean and plunge out of sight into the depths.  It can actually be a bit freaky to swim out along the edge of the reef and see how the island's edge drops straight down into oblivion. 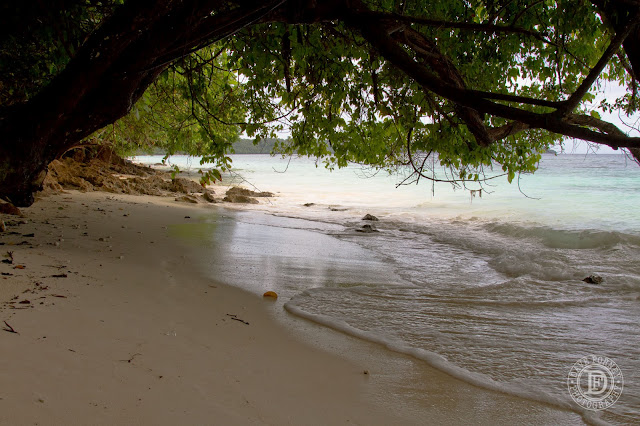 The kids had a blast playing here as well.  There are crabs and snails and shells all over, and for a brief bit of time the clouds thinned out and the sun almost poked through and the waters took on the aqua-clear color that they usually are. 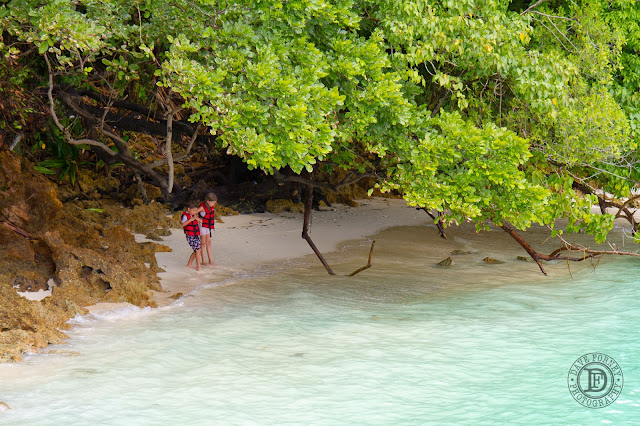 On our way back to Derawan we swung by Sangalaki, another nearby island that offers gorgeous, Robinson Crusoe type feelings.  But as you can see, the weather was not cooperating!  What you see on the horizon was quickly barreling our way and soon bore down on us in full force.  We returned to Derawan soaked wet from both sea and rain, but it was still a fun day. 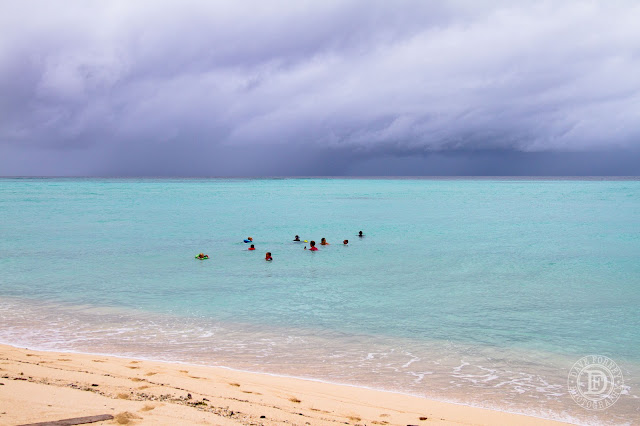 Check back soon for the third and final installment in the Island Weekend series.
Posted by Dave at 2:02 AM